Conservation in the 17th Century

The ‘Mayerne manuscript’, Sloane MS 2052, is on display at the National Gallery’s exhibition Making Colour and is also available to view on Digitised Manuscripts.  Compiled over twenty-six years, it reflects Mayerne’s abiding interest during his middle age in the chemistry of painting and the preparation of pigments, glues, varnishes and other substances.  As Making Colour reveals, before the synthesis and manufacture of pigments in the nineteenth century, artists made their own colours from the raw materials, experimenting and developing them through trial and error. 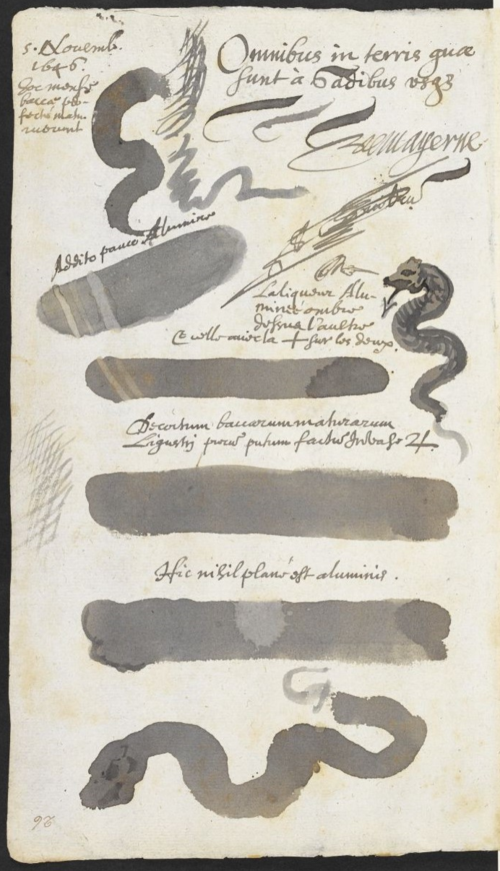 Such information is vitally important for conservators: understanding the chemical make-up of early modern or medieval pigments can help them to determine why paintings have degraded in certain ways, and inform any interventions that they might make to rectify or halt such deterioration.  The Mayerne manuscript is also of interest in the history of conservation as a discipline, since it also contains notes about how paintings were repaired and cleaned nearly four centuries ago. 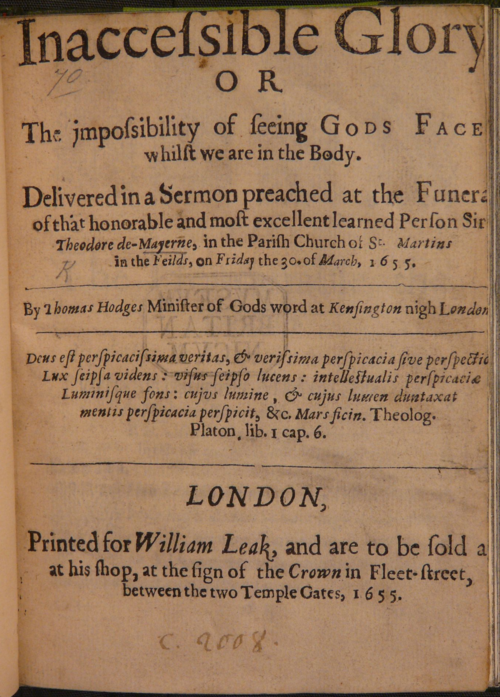 At the close of his sermon, preached at the funeral of Sir Theodore de Mayerne on Friday, 30th March 1655 at St. Martin-in-the-Field, Rev. Thomas Hodges remarked that:

‘He [Mayerne] was a person of rare accomplishments...I confess I know not any subject which might be either for necessity or delight whereof he was ignorant, nay in which he was not a great proficient, and expert master.  And, which is more admirable, this variety was not attended with the least discernable confusion, but so methodised and digested that he readily at his pleasure commanded it when occasion required, and brought it forth clothed in such language as he spoke him no less an orator than an artist.’ 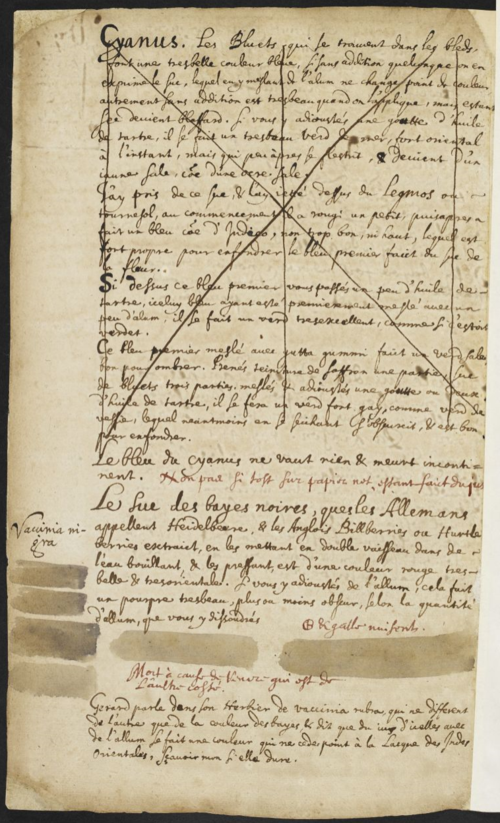 However tidy-minded and articulate Mayerne might have been in life, his manuscript Pictoria, sculptoria et quae subalternarum artium is something of a jumble.  In Sloane MS 2069 (f. 172r), we find a letter from Mayerne to his friend Dr Monginot in 1630, in which he recognised the need ‘to take up my pen, if I wish to leave to posterity some of my dearest children – that is, the fruits of my genius – as my conscience dictates, and as my friends invite me’.  Yet, as with his medical case notes, Mayerne never succeeded in imposing order upon his artistic notes or preparing them for print during his lifetime.  Those illustrated with pigment samples or coloured diagrams have naturally attracted most attention and, until 2004, there was no complete edition in English of this manuscript. 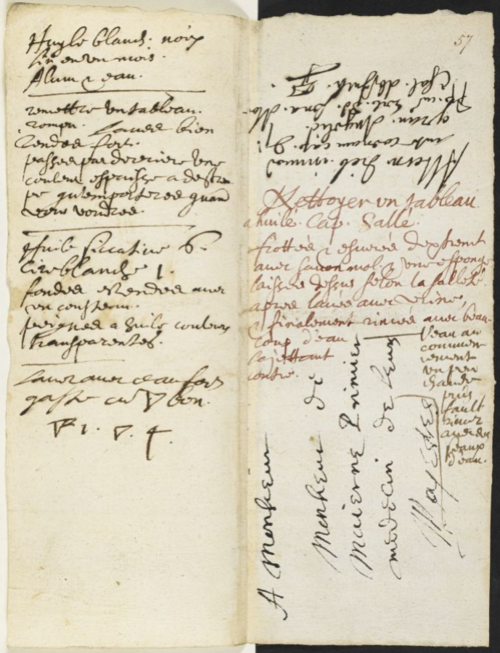 Buried among them are fascinating insights into conservation, 17th-century style.  The above page, for example, contains a note that to repair a cracked painting, it should be washed and rinsed thoroughly, and coated on the back with a thick water paint, that may be removed when necessary.  It is tucked among miscellaneous observations on the purification of light linseed oil by filtering it through a cow’s bladder, or the transparency of ox intestines in which gold has been wrapped. Sir Anthony van Dyck was a source of other conservation tips.  To repair a peeling oil painting and protect it from a damp wall, he advised painting the reverse with umber very finely ground in oil – a recipe essential for paintings undercoated with glue or water colours. 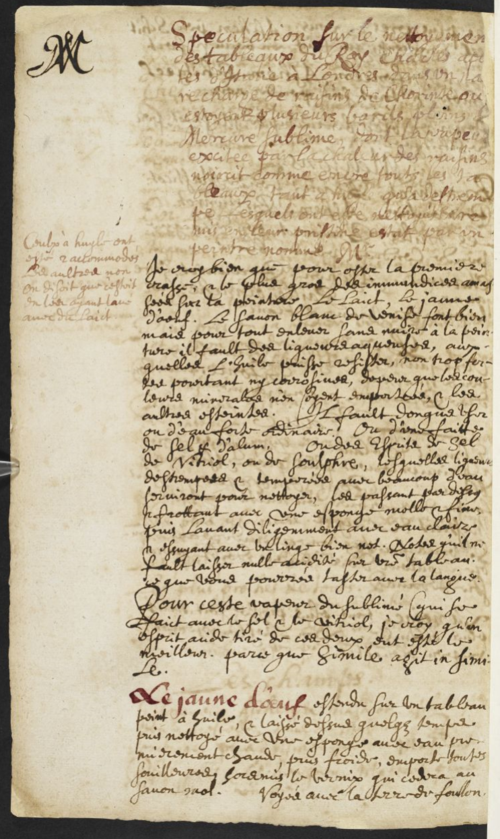 Notes on the cleaning of surface impurities and dirt from oil paintings, Sloane MS 2052, f. 14v

An unfortunate incident with paintings imported from Italy for Charles I prompted Mayerne to formulate his own ideas.  The paintings had been shipped, ill-advisedly, with a cargo of currants and mercury sublimate.  The former fermented and the latter vaporised, blackening both the oil and tempera paintings in the hold.  Mayerne jotted in the margins that the oils were apparently cleaned with milk – but observed that a more watery liquid would have been better: the oil would have resisted it and prevented the washing away or smearing of the pigments. 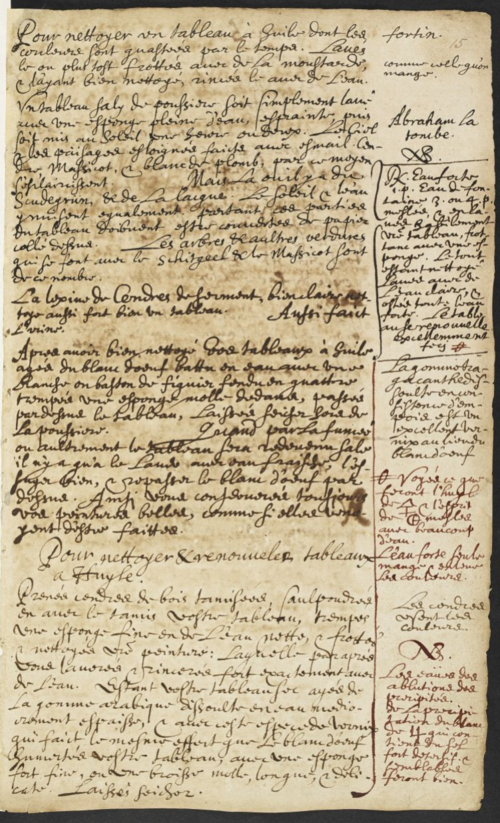 Notes on the cleaning and restoration of oil paintings, Sloane MS 2052, f. 15r

Mayerne continued with further, more specific instructions: that a picture soiled with dust should be washed with a wrung-out sponge, with any parts painted with the pigment Dutch pink protected from spoiling by glued-on paper.  Apparently, potash from crushed grape skins or urine are also effective! 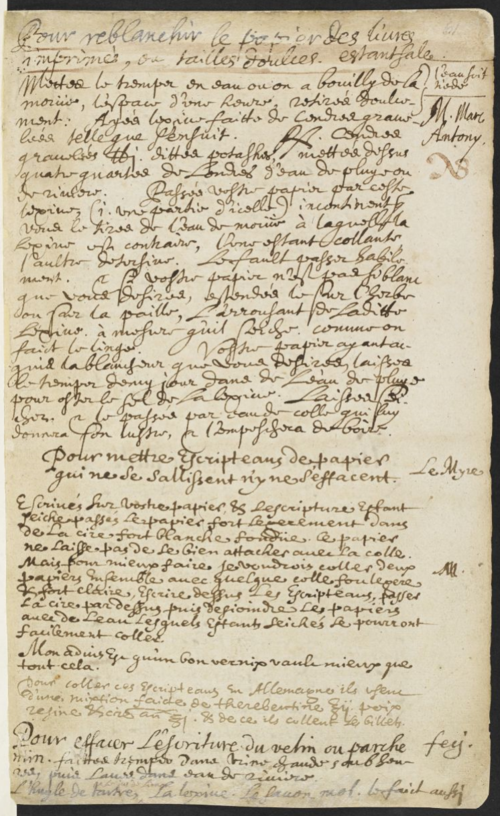 Mayerne’s interest extended beyond oil paintings to include prints, and he sought information from craftsmen such as Mark Anthony, a painter from Brussels, the royal apothecary Louis le Myre and Jean Anceaux, a bookseller from the French town of Sedan.  From the latter, Mayerne acquired some of the earliest recorded information about the bleaching of paper: one stage involved the soaking of paper in water in which a cod has been boiled. 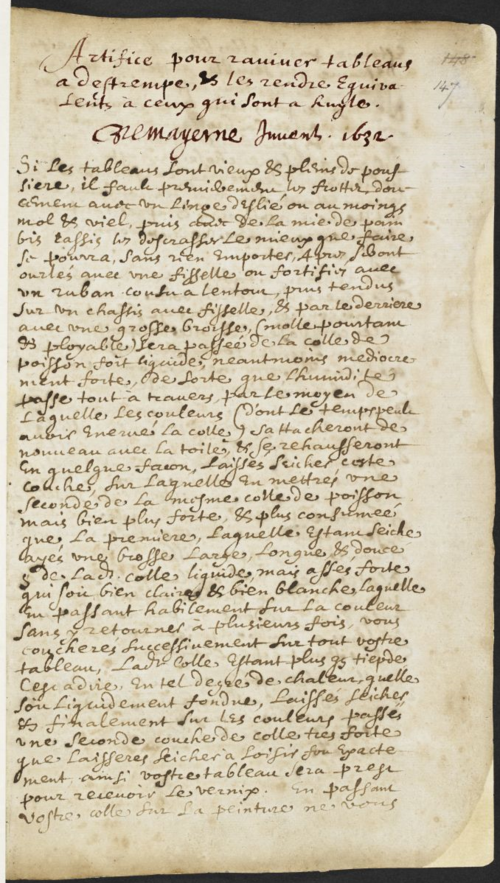 These and many other such notes formed the basis for subsequent experimentation, also recorded in the manuscript.  The same motivation drove Mayerne’s medical and artistic pursuits – a passion for the study, development and application of chemistry – and sustained the compilation of this notebook over twenty-six years.  He also had an eye for the commercial potential of his discoveries.  Towards the end of the manuscript, there is a recipe for ‘freshening tempera pictures and making them equal to those painted with oil’.  To distinguish it from his other notes, many of which had been obtained second-hand, he recorded in the title that it had been ‘invented by T. de Mayerne, 1632’, perhaps with the aim of ensuring that it remained his or his heirs’ intellectual property.