Today is the feast day of St Margaret of Antioch (not to be confused with St Margaret of Scotland or Hungary).  Although St Margaret was declared to be apocryphal in the year 494 by no less an authority than Pope Gelasius, and many people over many years have entertained doubts about her authenticity, she is still widely venerated as a saint today. 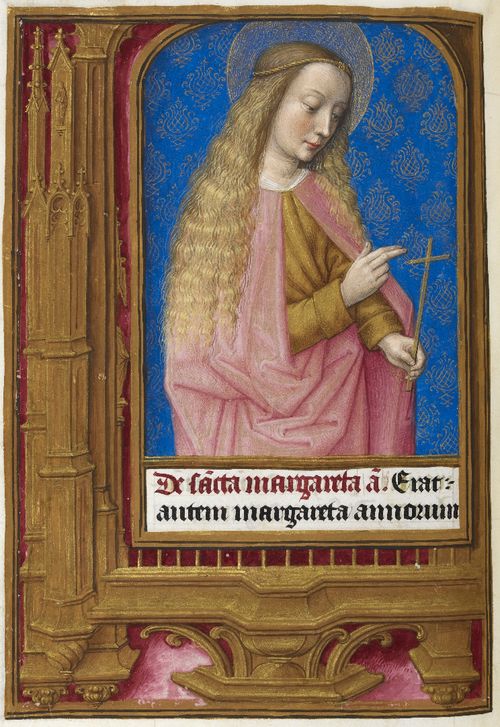 St Margaret was particularly popular in the medieval period, and her cult and image spread widely.  No doubt this was aided by her inclusion in Jacobus de Voragine’s Golden Legend.  In this text, Margaret was said to have been born in Antioch in the closing years of the 3rd century.  Although she was the daughter of a pagan priest, Margaret converted to Christianity and vowed eternal chastity.  She moved to an area in what is now Turkey with her godmother, and there caught the attention of a Roman prefect or governor.  In a turn of events that echoes many of the other early female martyrs, the prefect proposed marriage to her, but Margaret chose to remain true to her vow and to Christianity. 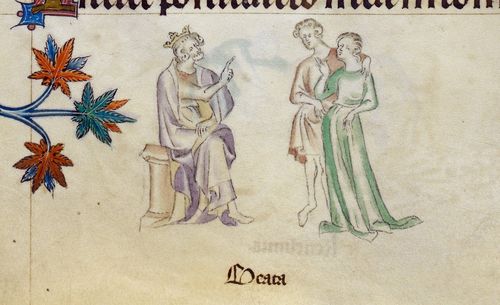 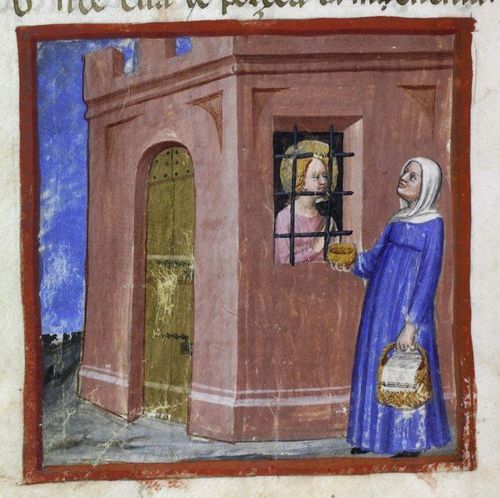 Detail of a miniature of St Margaret in prison being visited by her godmother, from Tectino’s Life of St Margaret of Antioch in verse, northern Italy, first half of the 15th century, Harley MS 5347, f. 26v

In retaliation, the prefect ordered her to be tortured and thrown into prison.  Whilst there, according to the legend, she was visited by Satan in the shape of a dragon.  Resisting temptation yet again, Margaret was swallowed by the dragon, but emerged from his side unscathed and carrying a cross after praying for aid.  Giving up on the idea of dragon-based revenge, her captors eventually beheaded her. 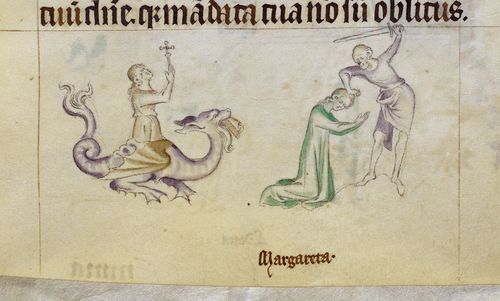 Detail of a bas-de-page scene of St Margaret emerging from the belly of the dragon, and being beheaded, from the Queen Mary Psalter, Royal MS 2 B VII, f. 256r

St Margaret is one of the most instantly recognisable saints in the medieval pantheon, because she is so frequently depicted emerging from the belly of a dragon (for more on the latter subject, see our post The Anatomy of a Dragon).  Her suffrage was widely included in medieval manuscripts, as were miniatures of her torture and death.  Below is a selection of some of our favourite images of St Margaret from throughout our collections; please do let us know if we’ve left out any of your favourites.  As always, you can reach us in the comments below, or on Twitter @BLMedieval. 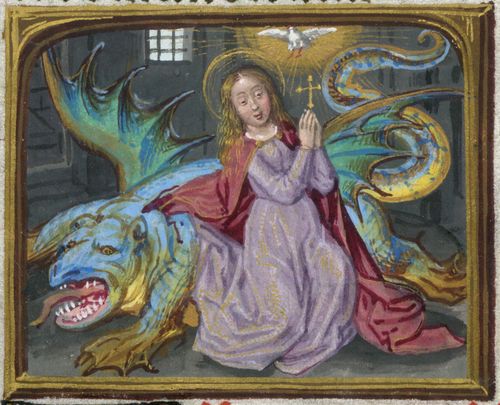 Detail of a miniature of St Margaret emerging from the dragon, from the Breviary of Queen Isabella of Castile, Netherlands (Bruges), c. 1497, Add MS 18851, f. 406v 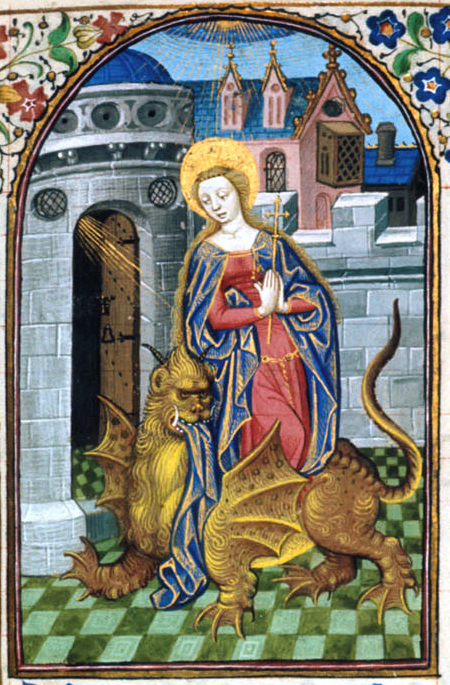 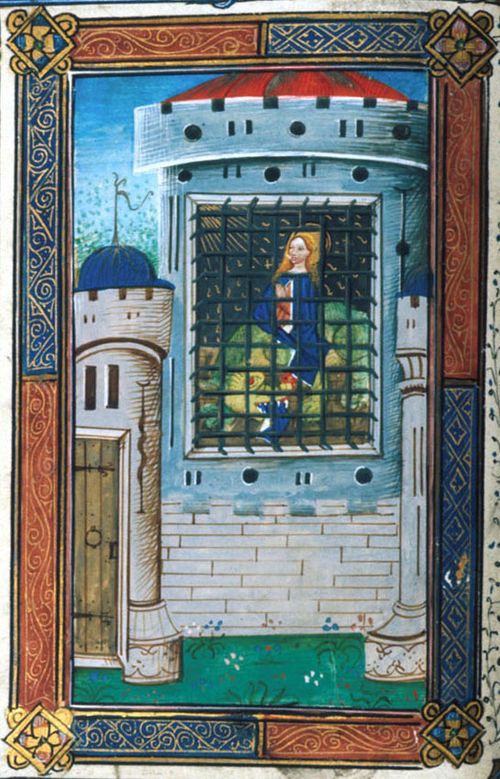 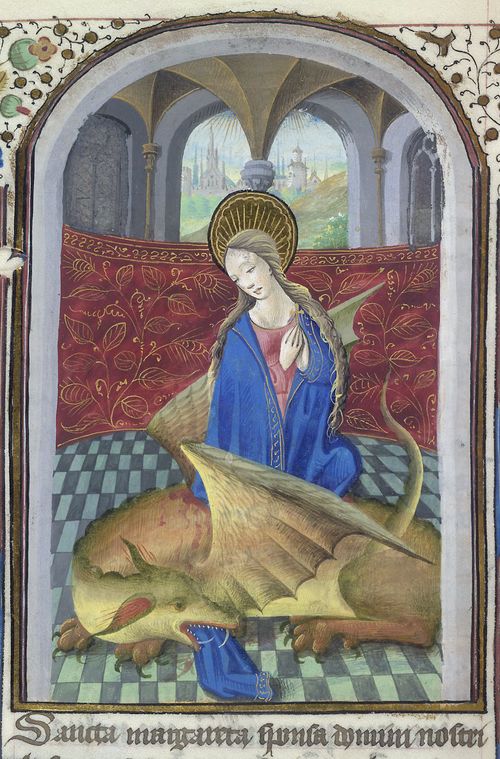 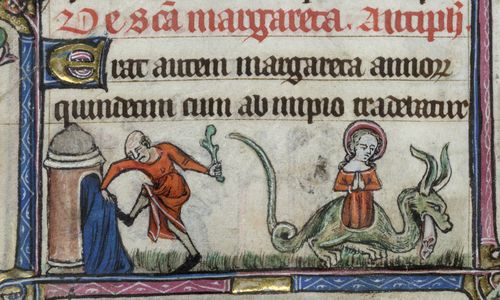 Detail of a bas-de-page scene of St Margaret being thrown into prison, and escaping from the belly of the dragon, from the Taymouth Hours, England, 2nd quarter of the 14th century, Yates Thompson MS 13, f. 86v 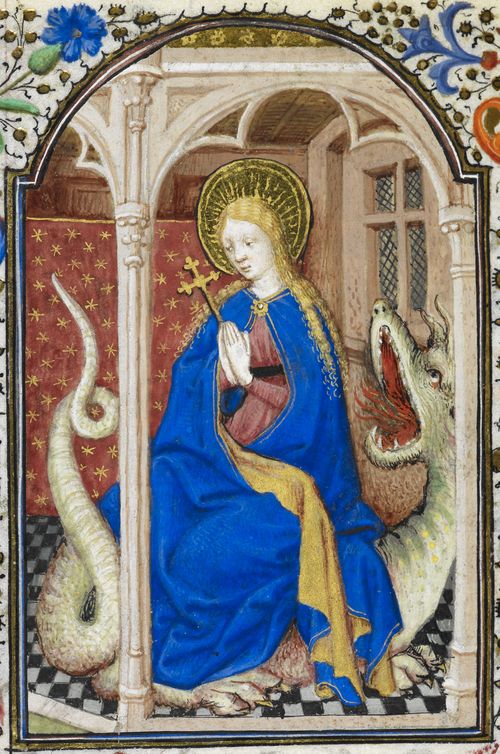 Besides providing us with numerous dragon images St Margaret is the patron saint of pregnancy and expectant mothers (something that has particular relevance to me at the moment!).  Happy St Margaret’s Day, everyone!