Famous US Documents In Our Magna Carta Exhibition

On the eve of Independence Day in the United States, we are excited to announce that original copies of two of the most famous documents in the world, the Declaration of Independence and the US Bill of Rights, will be on display at the British Library next year, on loan from the New York Public Library and the US National Archives. They will be major highlights of our exhibition to celebrate the 800th anniversary of that other extremely famous document, Magna Carta. Our exhibition – Magna Carta: Law, Liberty, Legacy – will provide the first opportunity to see these American documents on display in the UK. The exhibition, which will include our two original copies of the 1215 Magna Carta, will tell the story of its medieval roots and track its evolution from medieval peace treaty to modern, international rallying cry against the arbitrary use of authority. Open from 13 March to 1 September 2015, the exhibition is sponsored by Linklaters, the global law firm. The Declaration of Independence, copied in the hand of Thomas Jefferson (image courtesy of New York Public Library).

The Declaration of Independence is being loaned by New York Public Library and is the text which Thomas Jefferson, the principal drafter of the Declaration, copied in his own hand, incorporating changes made by John Adams and Benjamin Franklin to a draft version. Jefferson’s document also shows passages subsequently excised by Congress, notably the grievance against the slave-trade. The Declaration established the separation of America from Great Britain, and paved the way for the drafting of the American Constitution as we know it. 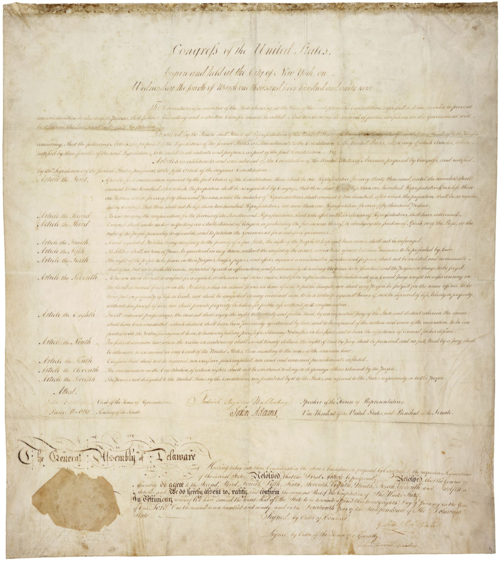 Delaware's copy of the Bill of Rights (image courtesy of the National Archives and Records Administration, Washington DC)

The Bill of Rights is loaned from the US National Archives, and is one of the fourteen original copies of the document produced in 1789, of which twelve are known to survive. This copy was sent to Delaware, which attached its certificate of ratification to the document and returned it to the federal government. The amendments to the Constitution proposed in the document were written by a clerk in the House of Representatives on a single sheet of parchment, and contain clauses guaranteeing Americans a number of personal freedoms and limiting the power of government. 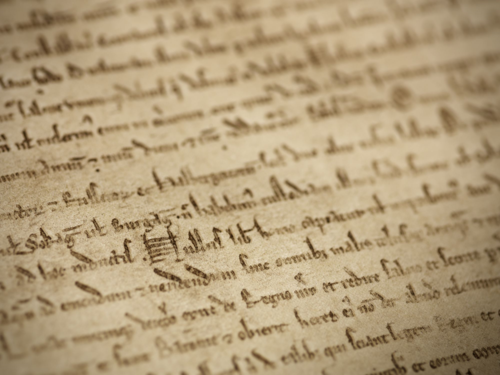 Detail of Magna Carta, 1215 (from one of the two originals held by the British Library)

Both of these US documents can trace constitutional influences back to Magna Carta, issued by King John in 1215. Magna Carta established for the first time that the king was subject to the law, not above it, and set out a new political order. Global law firm White & Case is sponsoring the loan of the two major US documents to the Library.

In 1976, the British Library loaned one of its 1215 Magna Cartas to the Library of Congress in order to commemorate the bicentennial of the Declaration of Independence. We are delighted that the US National Archives and New York Public Library have so generously agreed to lend their precious documents to the British Library as we celebrate the 800th anniversary of Magna Carta in 2015.

Congratulations! A fine achievement in securing this. How do I get in on the opening day?

Thank you! Details of how to buy tickets will be published here: http://www.bl.uk/whatson/exhibitions/magna-carta/