Up Close and Personal with the Holy Grail

A picture is worth a thousand words, but sometimes the impact of the thousand words themselves can also be stunning, even without the picture. 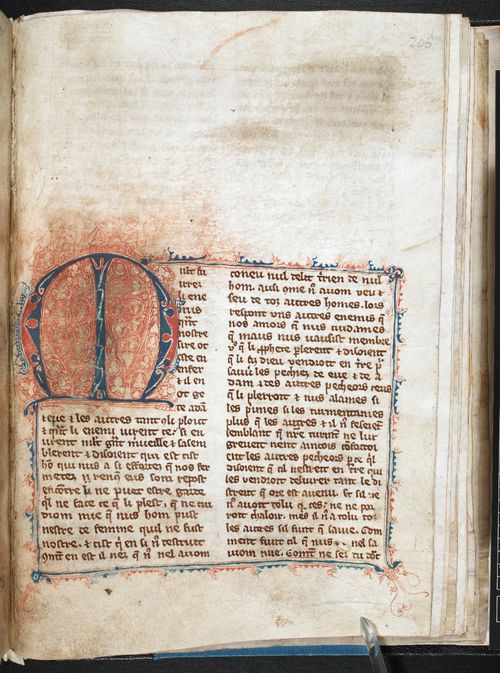 Space was left for a half-page illustration on the first page of Merlin, but we can only guess what might have been planned, since the picture was never added; from Merlin, England, 1300-1325, Add MS 32125, f. 206r

One of my favorite British Library manuscripts has recently been made available on the Digitised Manuscripts website.  This book (Add MS 32125, which includes copies of the monumental Arthurian romances The History of the Holy Grail and Merlin) is not embellished with gold leaf or lavishly painted illustrations, but it remains a jewel nonetheless.  Digital photography, meanwhile, allows us a unique aesthetic experience of the book.

Two corrections do not mar the beauty of the text: on the second line, a word is crossed out and further cancelled by the three dots written below, while on the third line the erroneous text was written-over, after being physically scraped off with a knife (literally “rasored out,” or “erased”); from Estoire del Saint Graal, Add MS 32125, f. 200v

The manuscript is not a large one – less than ten inches by seven – and such a close-up view gives a perspective on the page that would be impossible in person.  We can see the richness of the colors of the ink and parchment (far from simple black on white), and their texture as well, as the letters almost seem to have a three-dimensional quality sitting on the page: the text almost glows.  And the beauty of the letters is no accident.  ‘Gothic’ handwriting, of which this book is an extremely legible example, sometimes even sacrificed clarity to aesthetic concerns, emphasizing the regularity of letters’ vertical lines at the expense of making those letters easily distinguishable from one another.

This book is not a favorite of mine simply because of its visual appeal, however.  It also offers a highly unusual opportunity to enjoy the dialogue between the text of two of the Middle Ages most important Arthurian romances, and their medieval reading audience.  Often, romances from the so-called ‘Vulgate Cycle’ (see, for example, Royal MS 14 E III and Royal MS 20 D IV are deluxe productions, fit for a king and kept in pristine condition by their royal owners (for more on these manuscripts, see our posts Lancelot and the Quest for the Holy Grail, and Arthurian Manuscripts in the British Library).  This partial copy, however, is on a more modest scale, and must have seemed more approachable to its fifteenth-century readers, who have not hesitated to write notes in the margin or sketch in a tempting blank space. 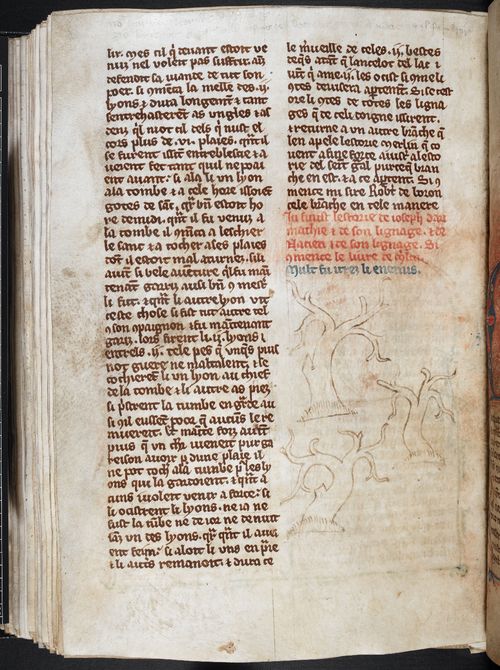 Even better, these marks offer clues about the way medieval readers understood the romances they enjoyed.  The twisted trees drawn at the end of the Grail story are not just distracted doodles or spooky blasted oaks.  They are literally ‘family trees’, inspired by the closing words of the text itself: ‘And so now’, the author writes, ‘the story is silent about all the lineages which have come from Celidoine’, founding father of a hereditary line culminating in the Grail knights Lancelot and Galahad, ‘and returns to another ‘branch,’ which is called The History of Merlin’, the story beginning on the following page. 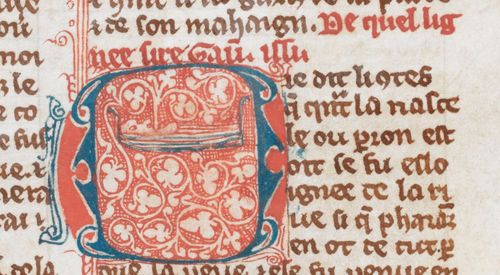 Above, a more professional version proves that this medieval reader was correct in being so struck by the text’s ‘branches’.  A passage on the lineage of Sir Gawain is introduced by an inhabited initial that recalls traditional depictions of a fertile family tree sprouting from the genitals of a sleeping ancestor – but here the foliage sprouts not from the patriarch’s groin, but from his mouth, since the branching of the family-tree is partially conflated with the branching of the story itself.

Detail of a marginal grotesque tooting his own horn – surely with excitement at his new digital form!; from Estoire del Saint Graal, Add MS 32125, f. 127r