Throughout the year there are two feast days commemorating John the Baptist.  On June 24th, his nativity is celebrated; he and the Virgin Mary are the only saints whose birthdays are commemorated.  The second feast day, August 29th, concerns his martyrdom by being beheaded. 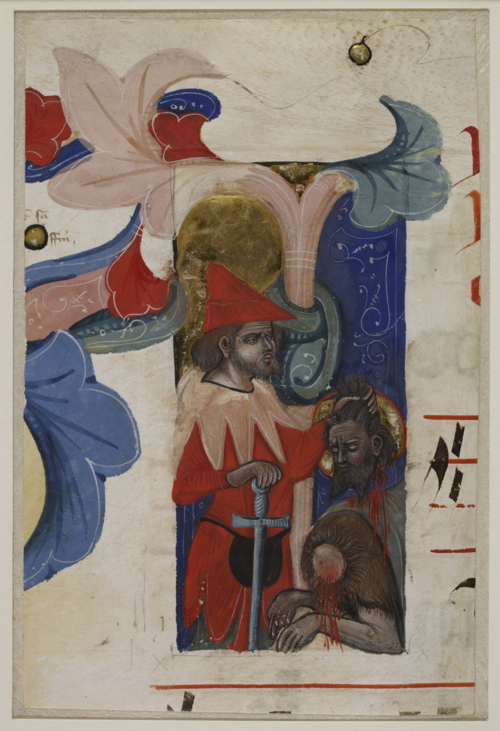 But let us hold off on such visually disturbing images for a moment and focus on St John’s life.  Most information about his life and work comes from the Four Gospels (Matthew, Mark, Luke, and John), the Acts of the Apostles, and the Jewish historian Josephus’ Antiquities of the Jews (Antiquitates iudaicae).  Based on these sources a pretty detailed biography of St John the Baptist can be established.  He was born in the 1st century BC to Zechariah and Elizabeth, probably a relative of Mary, the mother of Jesus.  As a prophet, he preached about the need for repentance and a righteous life before the arrival of someone mightier than him (there is still a debate whether he meant God himself or a messiah). 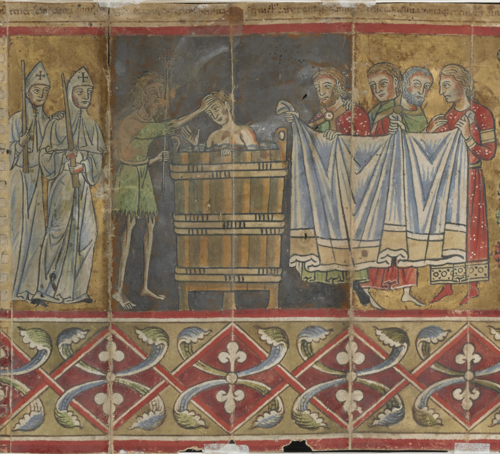 For St John and his disciples, baptism was considered a symbol of that repentance, although it was not necessary to undergo this rite in order to become accepted into their circle.  As we all know, among the people who were baptized by Saint John was Jesus. 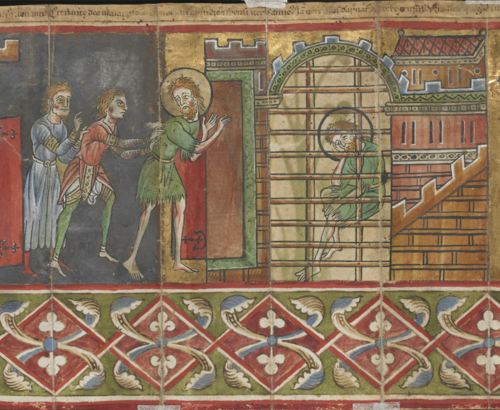 Detail of a two-part scene showing John the Baptist being pushed into prison and later sitting behind bars, Add MS 42497, f. 1v

Unfortunately for St John, his opinion on how one should live was not to the liking of Herod, the ruler of Judea under the Roman Empire, or his wife.  He was imprisoned, because apparently he looked disapprovingly upon Herod’s marriage to Herodias, who was Herod’s half-brother’s ex-wife. 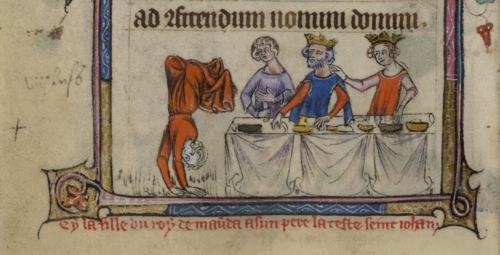 Detail of a bas-de-page scene of Herod and his queen sitting at a table and Salome to the right performing a tumble, from 'The Queen Mary Psalter’, England (London/Westminster or East Anglia?), 1310-1320, Royal 2 B VII, f. 264v

It all sounds like an overcomplicated soap-opera material, but in fact the outcome was very serious and dramatic. During Herod’s birthday party, Salome (who was the daughter of Herodias from the first marriage) danced so nicely, that he promised her anything she wanted. 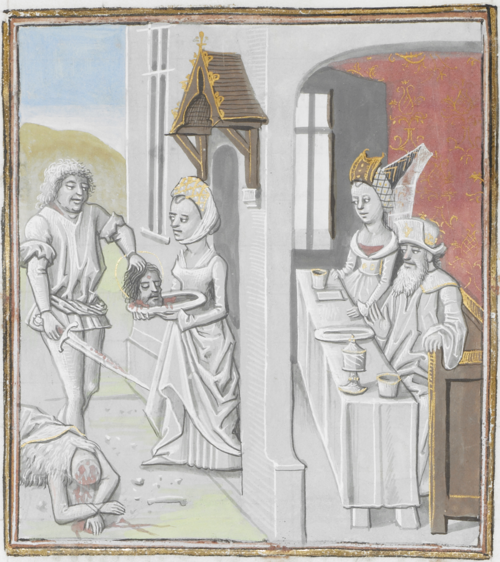 After getting sober, he probably regretted his open-endedness, because Salome, at Herodias’ instigation, asked for St John the Baptist’s head.  Herod reluctantly agreed and had the saint decapitated. 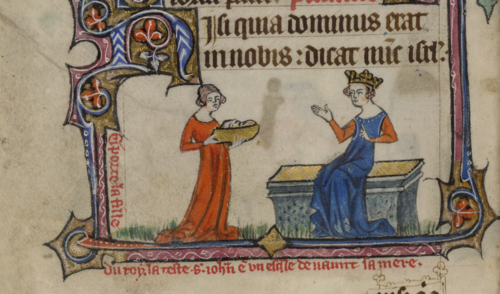 Bas-de-page scene of Salome presenting the head of John the Baptist in a golden bowl to Herodias, with a caption reading, ‘Cy porte la fille du roy la teste s[eint] ioh[a]n e[n] un esqu[e]le devaunt sa mere’ (‘Here the king’s daughter carries St John’s head on a platter to her mother’), Yates Thompson MS 13, f. 107v. On a side note, do you recognize this image above? You should, because it is the source of one of the images used for our little spoof from 2012. 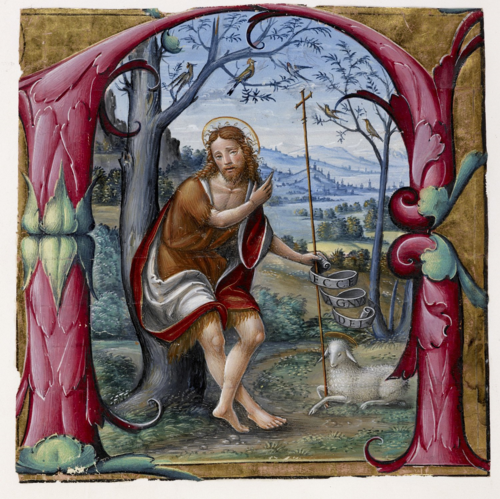 St John’s beheading scene is a very popular theme in Christian art.  Sometimes he is also depicted holding a platter (oh, the irony) or a book, with a lamb on it, alongside the description Ecce Agnus Dei. 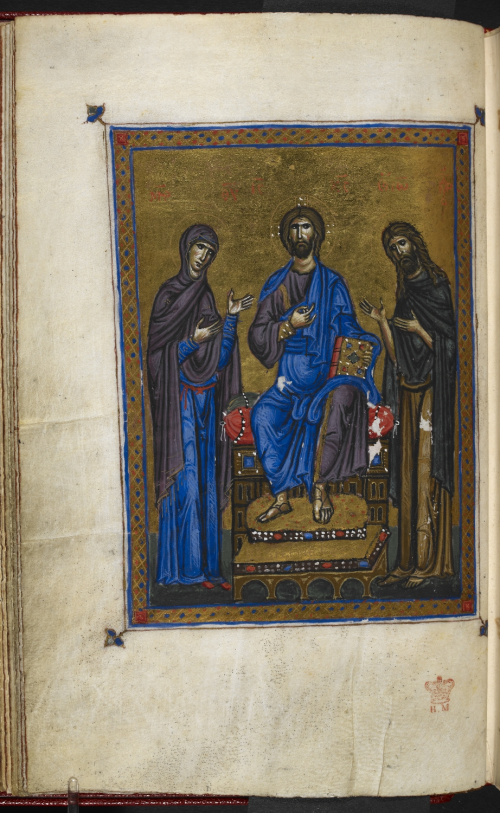 Miniature of Christ in Majesty with John the Baptist and Mary, from the 'Melisende Psalter', Eastern Mediterranean (Jerusalem), 1131-1143, Egerton MS 1139, f. 12v (more on this manuscript can be found in our post  Twelfth-Century Girl Power)

He is also an important figure in Byzantine and later in Eastern Orthodox art, because he is a part of the Deësis, which is a traditional iconic representation of enthroned Christ, flanked by the Virgin Mary and St John the Baptist.

To sum up everything we learnt today about St John the Baptist’s beheading, here is an all-in-one image: 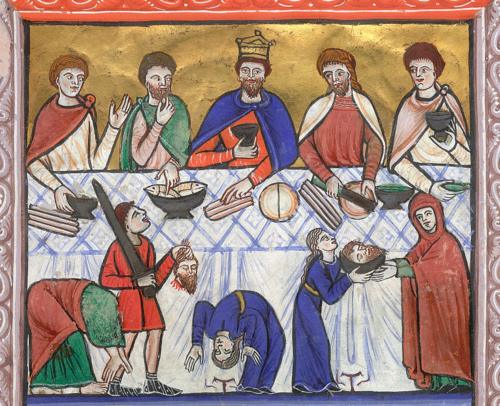