During our work here at the British Library, we have been struck recently by the different arrangement of the text in Psalter manuscripts – especially where the Psalms are written in more than one language. 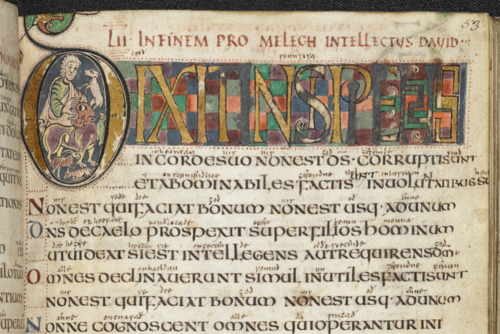 Detail of a historiated initial depicting David as a shepherd, with an illuminated word panel, and the text of Psalm 14 in Latin (‘Dixit insipiens’) with an interlinear Old English gloss, from the Vespasian Psalter, England (?Canterbury), 2nd quarter of the 8th century, Cotton MS Vespasian A I, f. 53r

Interlinear glosses were a common way of providing a commentary upon a text.  In the Vespasian Psalter, the Psalms were written out in Insular uncial script during the second quarter of the 8th century.  A century later, a scribe translated many of the words into Old English, writing them between the lines in Insular cursive minuscule.  The wide spacing of the Latin text meant that an almost continuous gloss could be accommodated with ease.  This ‘gloss’ is the oldest surviving translation into English of any Biblical text.  It reconfigured the manuscript into one that could be used to aid comprehension of the Latin text through a vernacular translation. 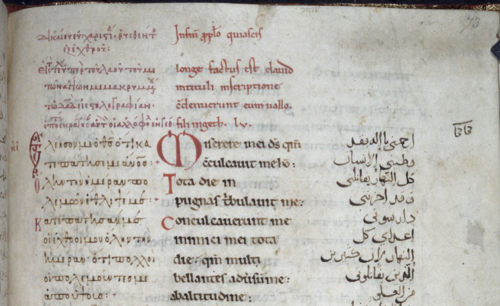 Other Psalters were specifically designed to accommodate a translation.  Harley MS 5786 is a trilingual Psalter, with three parallel vertical columns containing the Psalms in Greek, Latin and Arabic.  The manuscript was made at Palermo, within the court circle of King Roger II, between 1130 and 1153.  The Psalter reflects the multilingual culture of twelfth-century Sicily, which was inhabited by both Arabs and Greeks.  It may have been intended as a homage to Roger’s dominion over southern Italy and parts of northern Africa and Byzantium.

Trilingual psalters are very unusual; it is more common to find bilingual versions.  This example was made around 1220-1230 in Paris – the most important centre for the production of Bible manuscripts in the thirteenth century.  The appeal of a bilingual Psalter in Paris is obvious: a major preoccupation of university study was the understanding of the original meaning of the words of the Bible.  The Latin Vulgate in the right-hand column is accompanied in the left-hand column by the Greek Septuagint (itself a translation from the Hebrew Old Testament).  A reader could thus trace the translation of the Bible text back to an earlier version, and understand how Greek words had been rendered in Latin.  Some university scholars, such as Hugh of St Victor, advocated the study of Hebrew in order to obtain the original and literal meaning of the Bible. 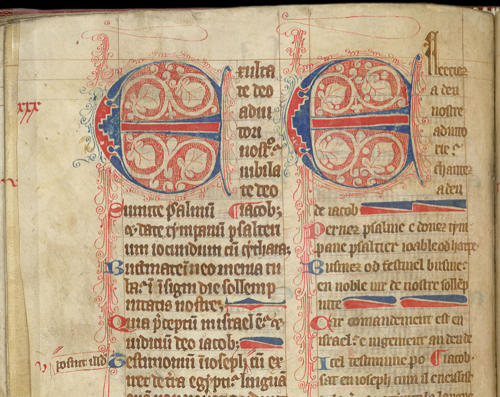 Detail of the opening of Psalm 81 (‘Exultate Deo’), in Latin and Middle French, with puzzle initials, from a bilingual Psalter, England, 1st half of the fourteenth century, Harley MS 1770, f. 77v

The translation of the Psalms into vernacular languages reflects the desire for a different kind of comprehension on the part of the reader: not of its ancient, ‘original’ meaning, but of its meaning in his or her own language.  Harley MS 1770 belonged to the Augustinian Priory at Kirkham in Yorkshire.  It is a sort of trilingual Psalter.  The first part of the manuscript contains the Psalms in Latin and French, again in parallel columns. 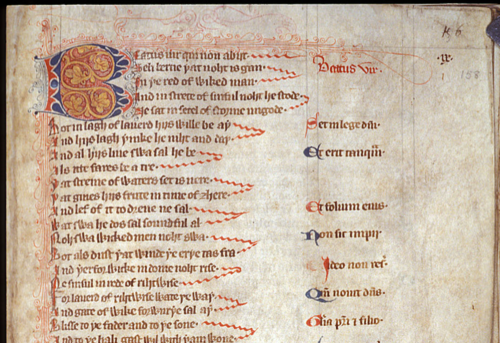 Detail of the opening of Psalm 1 (‘Beatus vir’), in Middle English with a Latin title and marginal rubric, from a bilingual Psalter, England, 1st half of the fourteenth century, Harley MS 1770, f. 158r

In the second part of the manuscript, the Psalms have been translated into Middle English rhyming couplets.  The author used an earlier Middle English interlinear gloss on the Vulgate, which was itself a modernised version of an Old English glossed Psalter.  The opening line of each Psalm is given in Latin: the Psalms were not numbered in medieval Bibles, but were cited using their opening words, so these were essential for navigating the text.  Extracts from the Latin Psalms were written in the margins, showing the reader which verse was being translated into Middle English at that point.  A reader could also compare the two vernacular versions through the Latin text that accompanied both. 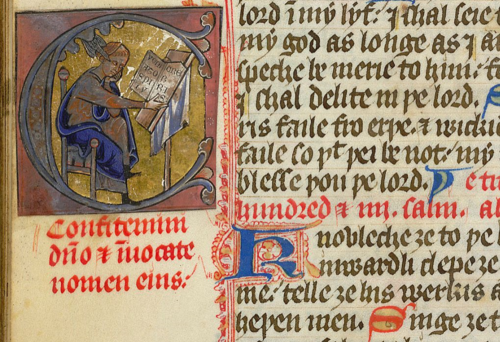 The need for such Latin prompts is illustrated by Arundel MS 104, a copy of the Wycliffite version of the Psalms.  Its owner cut selected historiated initials from two other manuscripts (one a Psalter commentary of c. 1220, the other a Psalter of c. 1370) and pasted them into the margins.  The subject of an initial rarely corresponds to the content of the Psalm it accompanies.  The letter itself, however, always matches the opening letter of the Psalms in Latin – and the Middle English text is glossed in the margin with the opening words of the Psalm in Latin. 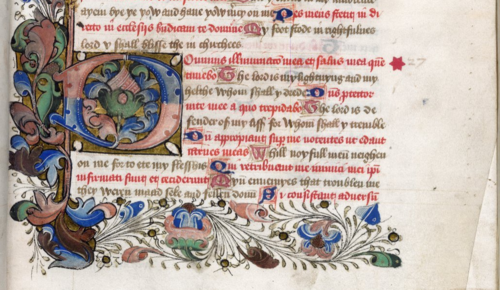 An altogether different layout is adopted in this Wycliffite version of the Psalms.  The text is arranged in a single column and alternates between the Latin and the Middle English translation – with elements of presentation rather than layout used to differentiate the two.   The Latin verses are written in red ink, each prefaced by a small blue initial; the vernacular verses in brown ink, each prefaced by a small pink initial.  Incorporating the two versions within a single column meant that the Psalms could be read as a single continuous text.  The Latin and Middle English versions may have functioned as a kind of ‘call and response’, aiding the reader’s comprehension of the Latin through the vernacular, like in the Vespasian Psalter.  Alternatively, the different coloured inks and initials could also have enabled the reader to focus his or her eyes on one version in particular: to skip over the translated passages and concentrate on the Latin – or, more controversially, to do the reverse, and read the Psalms solely in Middle English.

Interesting post. In the illustrations of he royal psalms, have you come across the use of a lion and dragon/ serpent at the feet of Christ or- particularly- a monarch re: Psalm 91? This is a French example from 1505- any other/ English comparators would be really helpful. http://4.bp.blogspot.com/-dIb0vSYgzWc/Uxto73D-OaI/AAAAAAAADS4/EqUVZUDkAWE/s1600/4.png
Thank you!