The latest in our running series of saint-day blog posts concerns St Bartholomew (see here for our posts on St Lawrence, St Benedict, St Margaret, St Patrick, St Apollonia – and the almanac that set the ball rolling in February).  The means of St Bartholomew’s martyrdom, you’ll be pleased to know, is up to our usual visceral and horrific standard – but first let’s take a quick look at the life of this apostle and saint. 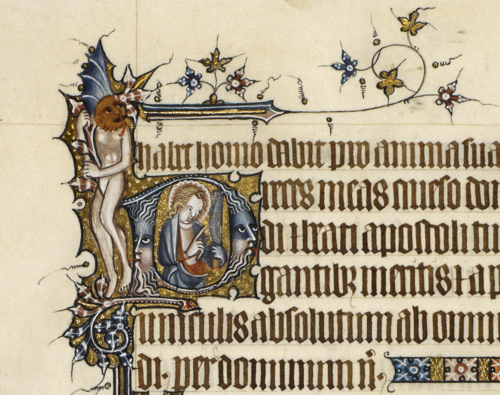 Detail of an historiated initial depicting St Bartholomew holding a knife, with grotesques in the initial body and margin, from the Bohun Psalter, ?London, 2nd half of the 14th century, Egerton MS 3277, f. 162v

Bartholomew is mentioned as of Jesus’s twelve apostles in the Gospels of Matthew, Mark and Luke (but not John).  Little is known about his early life.  According to Eusebius of Caesarea’s Historia ecclesiastica, written in the early 4th century, Bartholomew undertook missionary work in ‘India’ (a term that in the medieval period referred to a large and variously defined territory in the east), where he reputedly left behind a copy of St Matthew’s Gospel.

Other traditions have him travelling to various countries in Africa and the Middle East, including Ethiopia, Mesopotamia and Parthia.  He is of particular importance in the Armenian Church, which holds him and St Jude Thaddeus as patron saints for having brought Christianity to the region in the 1st century.  Depictions of him holding a book most probably refer to his work in spreading the Gospel. 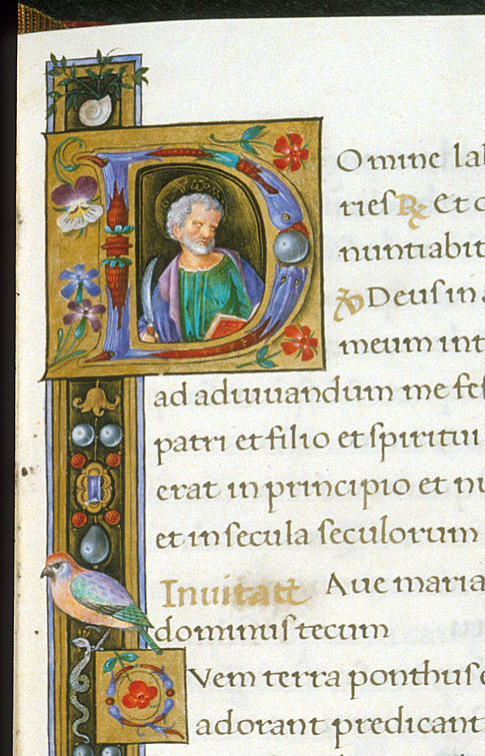 Detail of an historiated initial of St Bartholomew holding a knife and a book, from the Hours of Dionora of Urbino, Italy (Ferrara or Rome), 1509x1538, Yates Thompson MS 7, f. 68r

Most images of St Bartholomew, however, concentrate on how he died rather than how he lived.  He was martyred in the city of Albanopolis, which archaeologists have located at Zgërdhesh in modern-day Albania.  By most accounts, St Bartholomew was flayed alive – his skin torn from his body – and so he is commonly depicted with one or other of the instruments of his torture, most commonly a long, curved knife, but sometimes a whip (he is also supposed to have been crucified upside-down, a method more usually associated with St Peter). Other manuscripts illustrate the gruesome act taking place, with St Bartholomew usually shown being restrained on a bench while his torturers slice away at his skin. 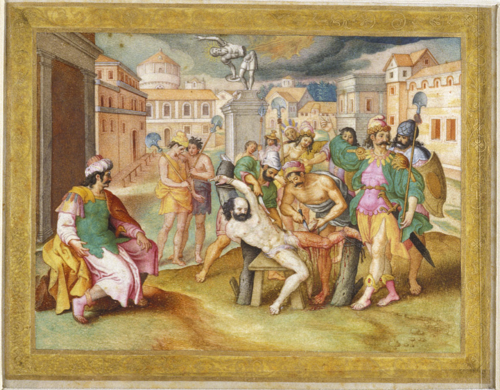 Cutting of a miniature of St Bartholomew being flayed alive, from a collectar, Rome, 3rd quarter of the 16th century, Add MS 46365B

Medieval illuminators did not shy away from the blood and gore.  This miniature was taken from a 15th-century Italian collectar, a book containing prayers for the canonical hours of the divine office, the cycle of services conducted by monks and priests throughout the day.  The way it dwells upon the visceral and drawn-out process by which St Bartholomew was put to death is most discomfiting. 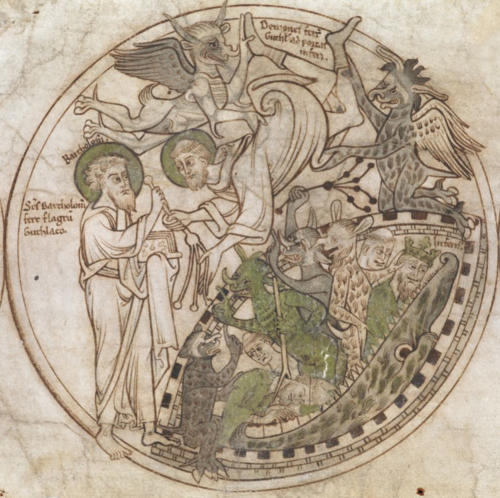 Bartholomew played a bit-part role in the life of one of our home-grown saints, Guthlac of Crowland.  Tormented by demons on his isolated island in the fens, Guthlac is depicted on the Guthlac Roll (Harley Roll Y 6) as being carried through the air towards an open hell-mouth.  Just in time, St Bartholomew comes to his rescue, handing him his whip, which Guthlac can use to beat back the unholy hordes.  The Guthlac Roll thus attaches an interesting twist to the story of St Bartholomew, where the instrument that was used by his persecutors is turned around and used against the forces of evil.  (For more on the Guthlac Roll, see out blog post ‘On a roll’). 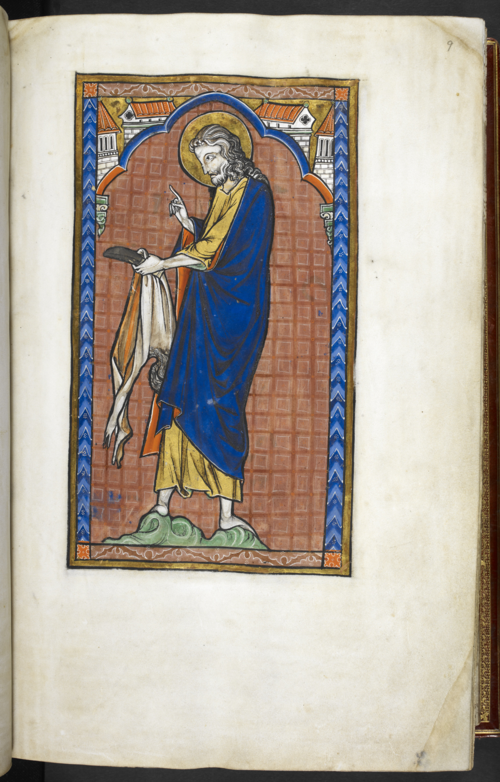 In some instances, St Bartholomew is also shown holding his own flayed skin.  The means of his martyrdom has led him to being adopted as a patron saint by various trades involved with the skinning of animals: butchers, tanners, trappers, leather workers and – most significantly for us – bookbinders. 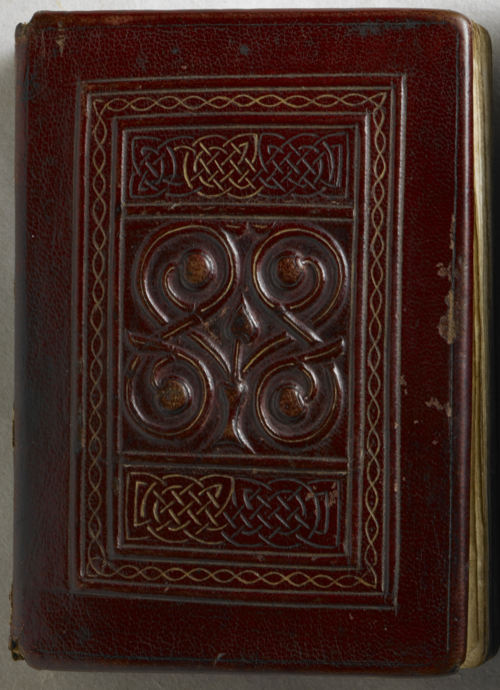 While it is an unfortunate fact that the medieval bindings of many, if not most, medieval books have been irretrievably lost, the British Library nonetheless possesses an enviable collection of bindings from across the medieval period.  We have the earliest intact medieval binding in existence, that attached to St Cuthbert Gospel, as well as many other examples right up to the 15th century. 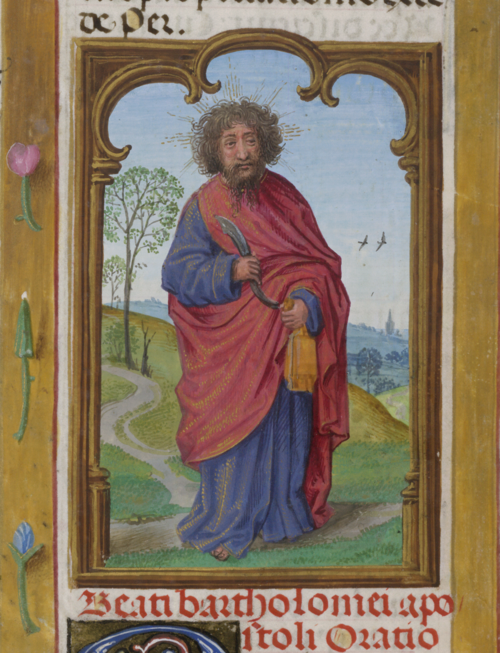 Detail of a column miniature of St Bartholomew holding a knife and a book in a girdle binding, from the Breviary of Queen Isabella of Castile, Southern Netherlands (Bruges), Add MS 18851, f. 442v

It seems appropriate, then, to draw attention to a fantastic new resource for studying these rare and important survivals: the British Library’s Database of Bookbindings.  This contains descriptions and images of bindings both medieval and modern, identifications of the binders responsible, and bibliographies.  It is possible to search by various criteria, including binders’ names, marks of ownership, country of origin, decorative style and colour and technique.  Further entries and descriptions are planned in the future.