In one of our blog posts last week, we featured the Wardington Hours, a relative newcomer to our collections. Three other Books of Hours have been acquired by the British Library since 2000, each of particular interest to art historians and scholars.

In the last blog post we mentioned the Bedford Hours (Add MS 18850), since it was made by the same group of Bruges artists as the Wardington Hours. It has been in our collections for more than 150 years, having been bought by the British Museum in 1852. In 2000, we acquired a manuscript known as the ‘Small Bedford Hours’, also probably made for John of Lancaster, duke of Bedford (b. 1389, d.1435). The evidence linking it to this famous patron is the following: the tree-stock, which appears on ff. 51r, 201r and 392r, was one of his badges.

The two partially erased initials on ff. 369r and 385v probably contained the arms of England and France.

Finally, the special prayers include these words: ‘et in domo regia servorum tuorum me nasci fecisti ac populum magnum michi commisisti regendum’, which seems to indicate that the owner was of royal blood, and ‘Semper vero in tu gratia me et ancillam tuam annam thori unius vinculo in nomine tuo michi coniunctam fovere digneris […]’, which indicates that the owner had a consort named Anne.  Bedford was married to Anne of Burgundy in 1423, and she died in 1432.

There is no calendar and the Hours of the Virgin at the beginning are of the Use of Sarum, which was the most popular rite in England in this period. Prayers or suffrages to St George, St Thomas Becket (scratched out) and St Catherine are included after Lauds. The last part contains the usual psalms, prayers and litany. 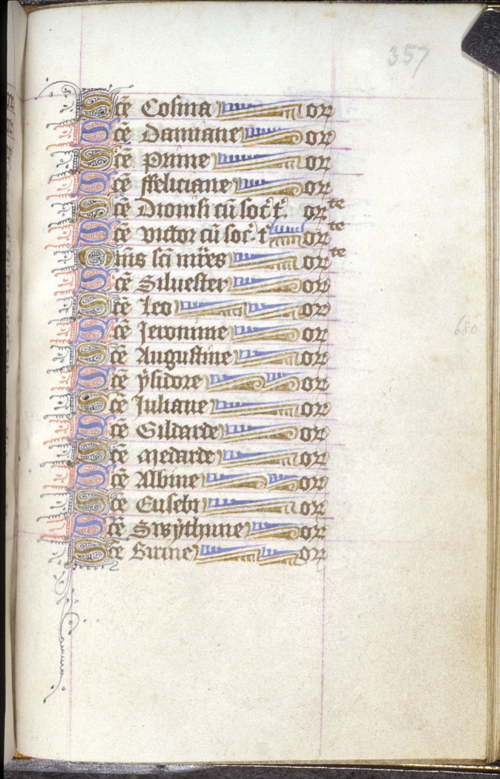 This Book of Hours, by contrast, contains three calendars.  First, a calendar of Sarum use (ff. 4r-8r) followed by two York calendars, the second (ff. 15r-31r) with facing astronomical tables by Richard de Thorpe, friar of York (b. c. 1339). The Sarum calendar seems to originate in Northern France, as it includes the feasts of the Norman saints Michel and Eloi. This part of the manuscript, with the accompanying Hours (ff. 32r-78v), was made in Bruges, as the illuminated initials and borders are in the same style as a manuscript made there in 1409 (now Durham, Ushaw College, MS 10). 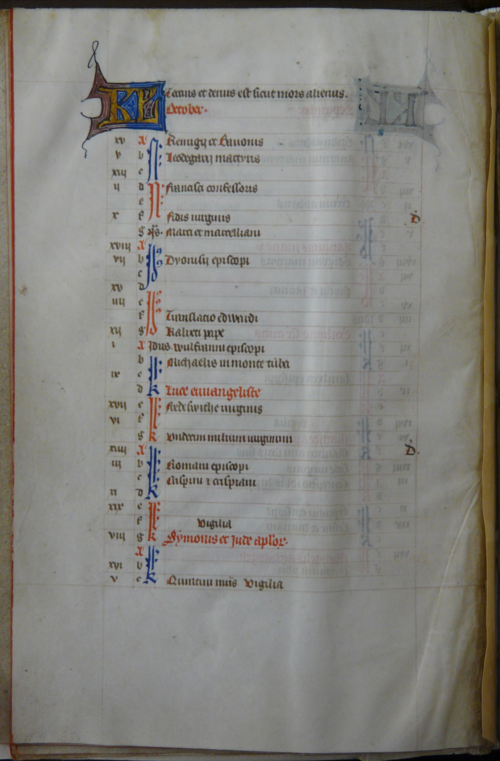 The two York calendars and scientific material (including figure drawings and tables), were added to the manuscript in the 1420s, as indications in the calendars suggest.  They are by a single hand and in a uniform decorative style, believed to be of York Augustinian origin but made for an outside patron rather than the Austin Friars themselves, as the feast of Saint Augustine in August is not in red or blue to mark a major feast. Another interesting feature is the use of green ink, which is unusual in England at this time. 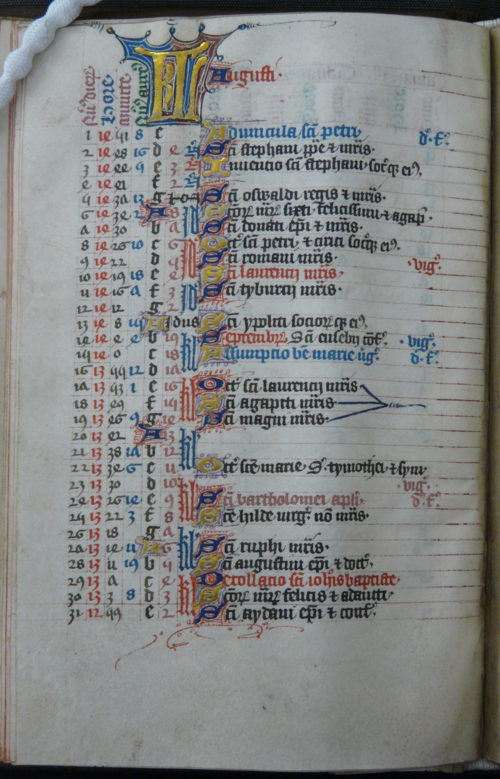 On f. 30v there is an astrological calendar in the form of a wheel with an enlarged centre hole, which indicates that it probably had a movable pointer like the hand of a clock. 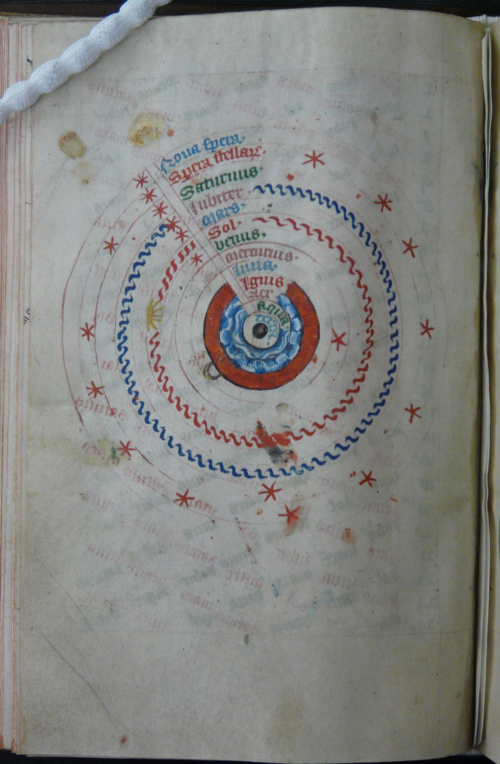 There are two full page images of naked men on folios 31r and 31v, following the second calendar. Zodiac man on folio 31 is shown with the zodiac symbols clustered over him indicating the parts of the body they govern. He stands in the large pool that seems to be the result of Aquarius hanging around his lower legs emptying his water-pots. The image is boldly painted with unusual green borders and an orange patterned background, which perhaps show Bohemian influence. The second diagram shows the phlebotomy points and is rougher in execution. 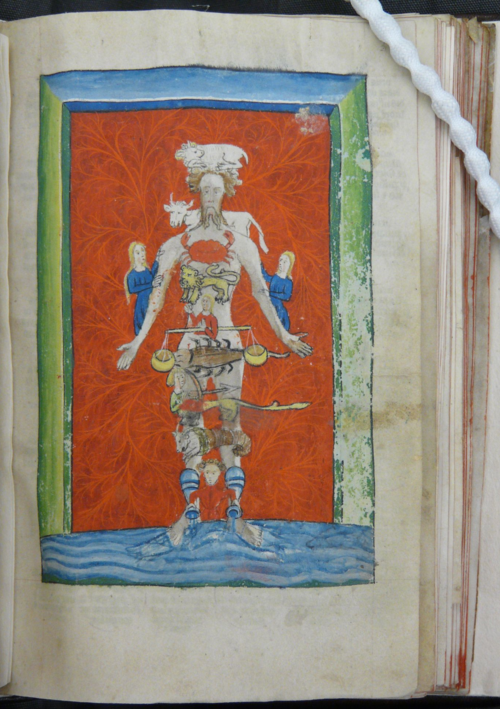 For much of the above, and for further information on this manuscript, see an article by John B Friedman, 'Richard de Thorpe's Astronomical Kalendar and the Luxury Book Trade at York', Studies in the Age of Chaucer, 7 (1985), 137-60.

This Book of Hours was also made in the southern Netherlands, probably in Bruges, with some material being added in England in the fifteenth century: a treatise on the fifteen joys of the Virgin, and three short poems in Middle English addressed to the Virgin, God and Christ, by Lydgate among others. The scribe of these additions signs his name ‘Chetwyn’ and there are four devotional diagrams including the following, entitled 'The iiii Cardinal vertuws’. 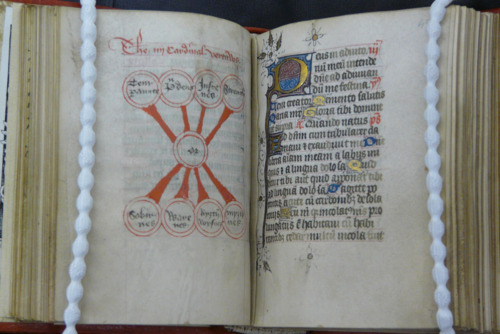 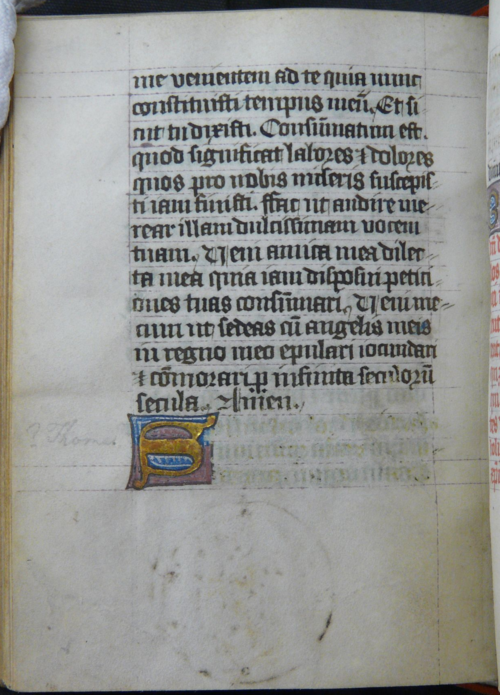 On this page a prayer to St Thomas Becket has been erased. Perhaps the owner had been on pilgrimage to Canterbury – possibly taking this book with them – and had placed his or her badge there to commemorate it whenever they recited the prayer.