Back in March this year, we announced that we had saved an important fifteenth-century manuscript from export: the only complete copy of the Catholicon Anglicum, one of the earliest Middle English-Latin dictionaries.  Inspired by this fascinating linguistic and lexicographical source, in the intervening months we have been cataloguing other late medieval dictionaries in our collection. The Promptorium parvulorum (‘The Students’ Storehouse’), like the Catholicon, had its Middle English entries arranged alphabetically, but in two sections: 'nomina' (nouns, but also adjectives, adverbs, pronouns, prepositions, conjunctions and interjections) coming first, followed by 'verba' (verbs).  The British Library has four copies of this text in the collection: Add MS 22556, Harley MS 221, Harley MS 2274 (a fragment) and Add MS 37789. The prologue to the Promptorium tells us that its compiler lived as a Dominican friar in King’s Lynn, Norfolk, in 1440.  Two of our copies – Add MS 22556 and Add MS 37789 – can be localised to Norfolk on the basis of linguistic evidence.  The compiler described himself as a recluse, and perhaps lived in an anchorage attached to the order’s house.  Although his name is unknown, the Promptorium is commonly assigned to ‘Geoffrey the Grammarian’ on the basis of an annotation in a printed edition of 1499. 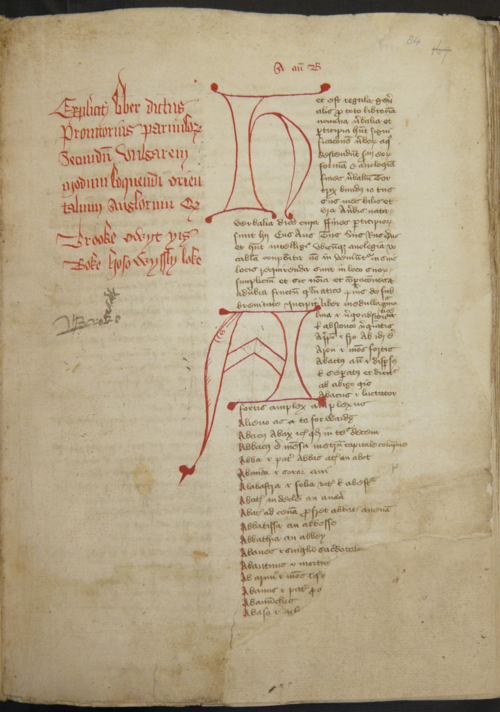 The explicit to the ‘Promptorium parvulorum’ and incipit to the ‘Medulla grammaticae’, with scribal colophon of John Broke, Add MS 37789, f. 84r

In the sixteenth century, John Bale attributed the authorship of another late medieval dictionary to Geoffrey: the Medulla grammaticae.  The two texts had a close relationship in both manuscript and print.  In Add MS 37789, they are bound together within the same manuscript.  The title ‘Medulla grammaticae’ is sometimes attached as an alternative in early printed editions of the Promptorium parvulorum.  However, there is ultimately no evidence to support Bale’s attribution, which has proven more confusing than helpful to scholars. 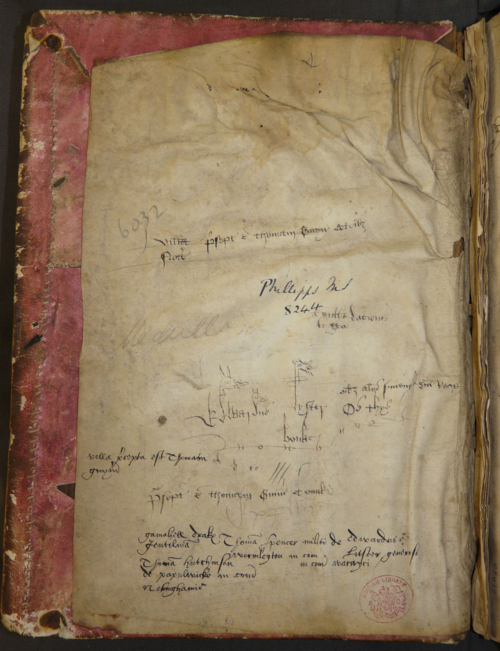 The manuscripts of these dictionaries are functional, unelaborate objects – written for the most part in cursive scripts, usually on paper, with decoration rarely extending beyond plain coloured initials – but they are intriguing nonetheless.  Add MS 62080 (a Medulla), which retains its medieval binding, appears to have passed through several hands in the Nottingham area. 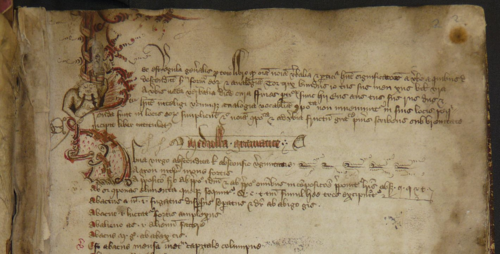 Detail of the opening of the ‘Medulla grammaticae’, with a grotesque figure chewing on the cadels of the intertwined letters ‘H’ and ‘A’, Add MS 62080, f. 2r

This copy of the Medulla also has some amusing grotesques in its initials. 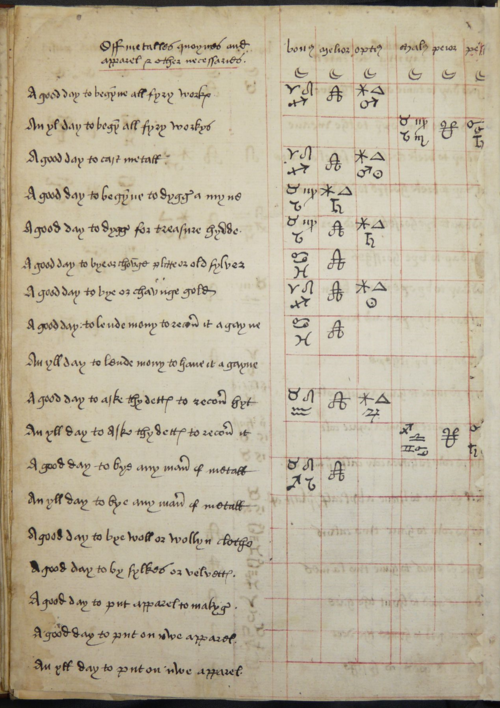 Prognostication calendar relating to ‘metalles, quoynes and apparel and other necessaries’, from a composite miscellany containing a fragment of the ‘Promptorium parvulorum’, England, 2nd half of the 15th century, Harley MS 2274, f. 61v

The fragment of the Promptorium at the end of Harley MS 2274 is accompanied by an array of liturgical, devotional, medical and prognostication texts: including a curious zodiac calendar that advised when would be a good or bad time to ‘begynne all fyry workis’ (i.e. involving furnaces), ‘to lende mony to have it a gayne’, ‘to bye woll or woolyn clothe’, or ‘to put on nwe apparel’. 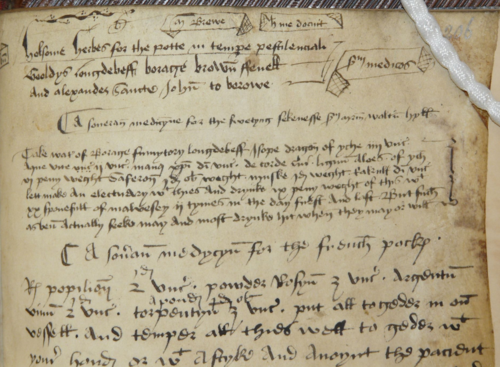 Harley MS 221 (a Promptorium) was one of the manuscripts acquired by Robert Harley from Sir Symonds d’Ewes on 4th October 1705, in the first of several ‘block purchases’ from other manuscript collectors.  It is one of the few dictionary manuscripts on parchment, and is written in a fine Textura script.  The last leaf contains a number of medical recipes for dealing with pestilence, sweating sickness and ‘the french pocks’ (i.e. syphilis).

Some evidence of the production and early provenance of Harley MS 1738 (a Medulla) survives.  It may have been written by a scribe called William Harper, who wrote his name and the following verse upside-down at the bottom of the last page: ‘Si mean penna valet, melior mea littera fiet’ (‘If my pen is strong, my letter will be better’) (f. 81v). 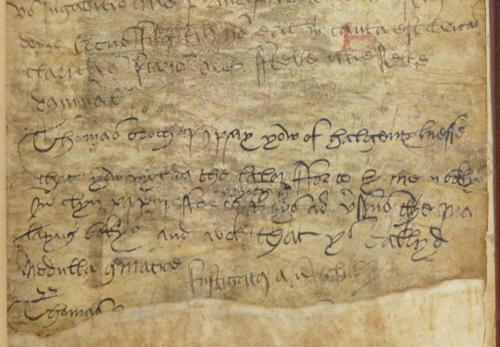 Detail of an inscription relating to the ordering of paper, Harley MS 1738, f. 1r

It seems that at same point in the late fifteenth century someone wished to make a copy of this manuscript, and asked their brother Thomas to acquire the materials for them to do so: ‘Thomas brother I pray yow of halgentylnesse that yow wyl do the labor for to by me ii bokys in lyn papir for wrytyng [...] ad verssus the pralaying bokys and wel that ys callyd Medulla gramatice’ (f. 1r).  It is of particular interest to our study of book production that it was possible in the fifteenth century to purchase not just plain paper, but quires that had been already ruled and lined for writing. 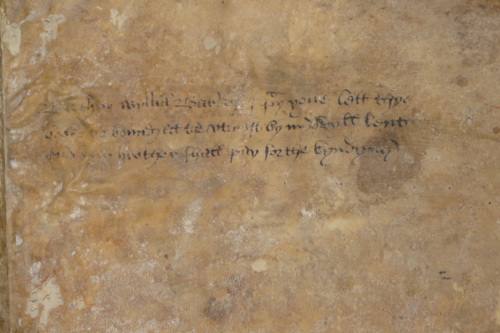 Detail of an inscription relating to the binding of the manuscript, from the ‘Medulla grammaticae’, England, mid-15th century, Add MS 33534, f. 1r

A similar instruction survives in another Medulla manuscript: Add MS 33534.  This is another copy with a medieval binding, probably of the mid-fifteenth century, that once featured straps and labels on the exterior.  An inscription on f. 1r reads: ‘Brothur William Barkere I pray youe lett thys booke be bound at the utmost by myddyll Lent and my brother shall pay for the byndyng’.  The wording appears to indicate that William Barker was a monk, who perhaps was being given the book by a layman, whose brother in turn would foot the bill for its binding. 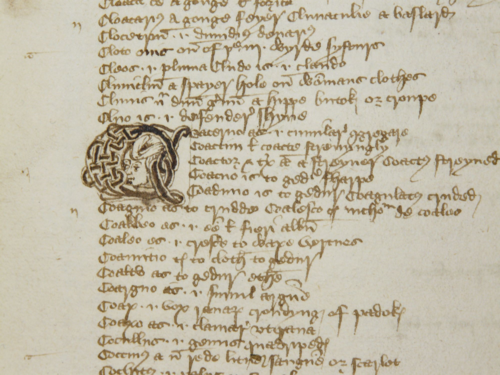 These dictionaries are an important reminder that Latin learning was not confined the cloister, cathedral or church.  Laymen too required a functional command of the language in order to conduct business, to read and understand legal documents such as charters and wills.  There is growing evidence as well – that the Catholicon Anglicum, Promptorium parvulorum and Medulla grammaticae together reinforce – that to understand lay reading habits we must go beyond vernacular texts.  The laity did not content themselves with reading in the vernacular, but sought out and consumed popular and broadly circulating historical, literary, and religious texts in Latin for their own entertainment and edification.

Hi!
Love these but so disappointing when links to MS do not lead to digitised images. Are they available elsewhere?

Would be so wonderful to be able to "get closer" as with other digitised MS.

And SOOO fascianting to find dictionaries PRIOR to Dr Johnson's!!!

A query re prognostication chart, which is fabulous!
Understand the astrological symbols, and looks like new moon symbol at top..but what are titles of each column?

The titles advised the reader when was a good or bad time to do something, and read as follows: 'bonus, melior, optimus' and 'malus, peior, pessimus' - simply 'good, better, best' and 'bad, worse, worst'

Fabulous answer! I love it!
Thank you