We are proud to announce that the Catholicon Anglicum is now being exhibited in our Treasures Gallery. The British Library acquired the manuscript, the only complete copy of the text in existence, in February this year, for £92,500, following the temporary deferral of an export licence. It had lain hidden for over a century in the Monson family collection in Lincolnshire. 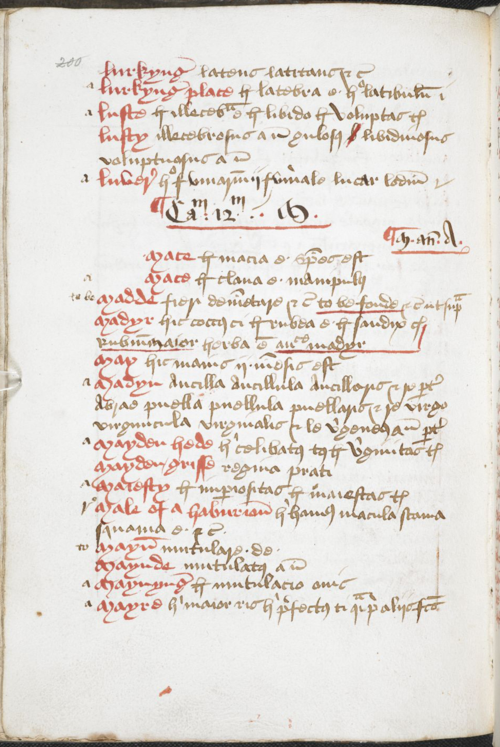 Since its arrival at the British Library, it has been catalogued in detail (along with other late medieval dictionaries in our collection), photographed in full and uploaded to Digitised Manuscripts, and now forms the centrepiece of a display of manuscripts about the variety of languages that were spoken and written in medieval Britain. This is your chance to see this rare and precious manuscript face-to-face! 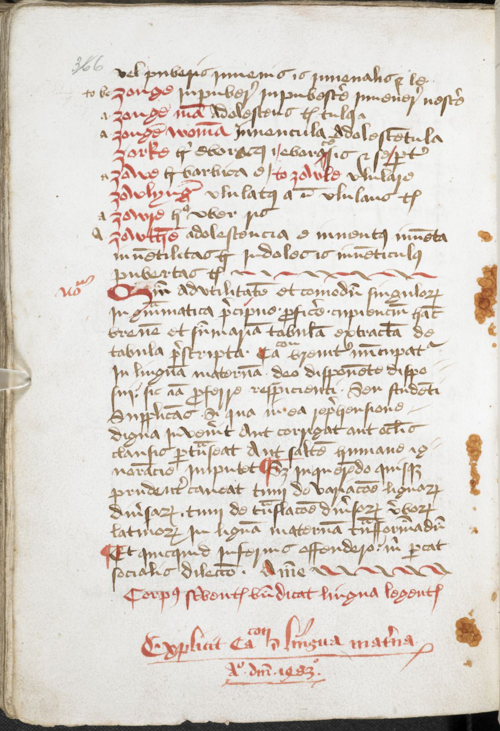 The Catholicon was the first such dictionary to have all of its entries arranged in alphabetical order. The positioning of vernacular words first, with Latin equivalents following, shows that it was intended to be used for Latin composition not translation. It would have been of particular utility in the grammar schools that were being founded in large numbers during the 15th century. 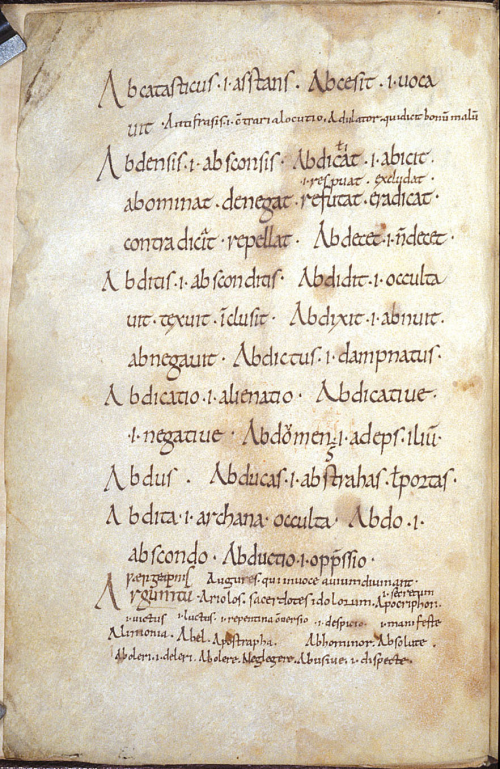 Alphabetical glossary of rare Latin words, with glosses in Latin and Old English, England (?Worcester), 4th quarter of the 10th century or 1st half of the 11th century, Harley MS 3376, f. 1v

An early predecessor of the Catholicon is the first exhibit in the display: an alphabetical glossary of rare Latin words that was made in the 10th or 11th centuries, perhaps in Worcester. It may have been made for someone familiar with only basic Latin vocabulary, or as an aid to developing a more advanced command of the language. The headwords are glossed with more simplistic Latin equivalents or, sometimes, Old English words.

Following the Norman Conquest, Old English was supplanted by French as the language of the ruling elites. The next item on display in the Treasures Gallery is a 14th-century copy of a treatise written by Walter of Bibbesworth a century earlier, the Tretize de Langage. It was designed to be used by a mother to teach her two young children, and uses descriptions of everyday life and work, rhymes and riddles – even animal sounds – both to entertain and educate. 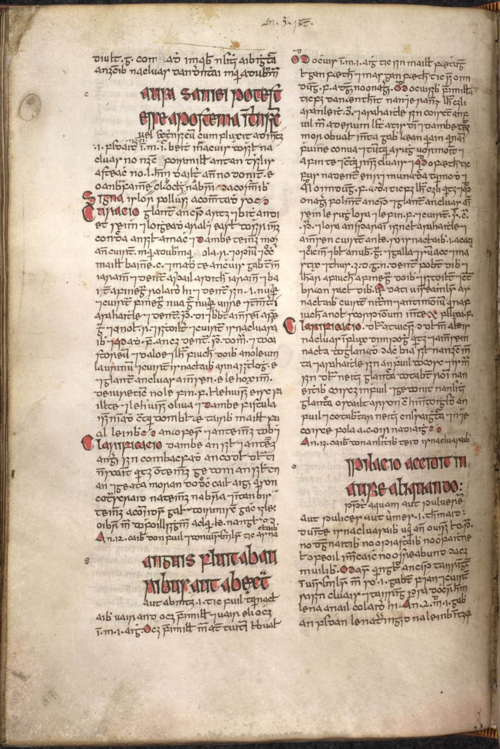 Descriptions of diseases and their symptoms, treatments and cures, from the ‘Lilium medicinae’, Ireland (County Clare), 1482, Egerton MS 89, f. 93v

The other two exhibits showcase languages that were spoken elsewhere in the British Isles. The Lilium medicinae, a guide to the treatment of illnesses, was written in 1303 by Bernard de Gordon, a famous physician at the University of Montpellier in France. Bernard was one of the medical authorities named by the Doctor of Physick in the General Prologue to Chaucer’s Canterbury Tales. This Irish translation of the Lilium was written by the scribe Domhnall Albanach Ó Troighthigh of County Clare in 1482. The Latin headings name various illnesses; the subheadings ‘Signa’, ‘Curacio’ and ‘Clarificacio’ describe their symptoms, treatment and cure. Tinted woodcut of the Flagellation of Christ at the beginning of a poem by Walter Kennedy, from a collection of Scottish poetry, ?Scotland, 1st half of the 16th century, Arundel MS 285, ff. 5v-6r

A collection of Scottish poetry illustrates the cross-over between manuscript and print in the early 16th century. It contains seventeen 15th-century printed woodcuts, which have been pasted into reserved spaces in the book, often at the beginning of the texts. The source of the woodcuts is not known. They may have been recycled from a previous book, or gathered from a selection of devotional handbills or flyleaves. A poem about the Passion of Christ by Walter Kennedy begins, appropriately, with a scene of the Flagellation of Christ, an elaborate rubric in red ink and the opening words in an imposing display script. 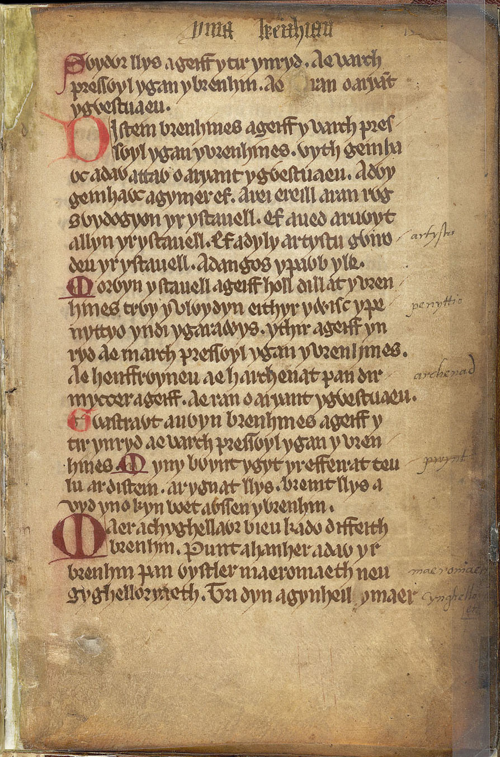 There were, of course, other languages spoken in medieval Britain besides these. The British Library holds manuscripts of medieval Welsh, such as this legal text known as ‘The Book of Cyfnerth’. It contains the Gwentian code of Welsh law – a witness to a legal system distinct from that of England – and was written in south-west Wales, perhaps in Neath, early in the 14th century. The scribe who made this book was also responsible for another in the British Library, Cotton MS Cleopatra A XIV, which also contains Welsh laws and a copy of the Cosmographia of Bernardus Silvestris. Harley MS 1782 further illustrates the flowering of regional forms of Christianity during the medieval period that we saw in the Scottish poetry book.  This manuscript is a 15th-century copy of a poem about Christ’s passion written in Cornish.  The text is illustrated with a series of scenes from the Passion – here, Christ carrying the Cross – akin to those that marked the Stations of the Cross in medieval churches.