Our recent blogpost, Visions of the Apocalypse, featured a selection of images from five of our favourite Apocalypse manuscripts. These works are filled with imaginative depictions of St John’s visions in the Book of Revelation, and it is interesting to compare how different artists illustrated the same text.

One of the most evocative passages in Revelation is at the beginning of chapter 12:

‘And there appeared a great wonder in heaven; a woman clothed with the sun, and the moon under her feet, and upon her head a crown of twelve stars … And there appeared another wonder in heaven; and behold a great red dragon, having seven heads and ten horns, and seven crowns upon his heads. And when the dragon saw that he was cast unto the earth, he persecuted the woman which brought forth the man child.’ 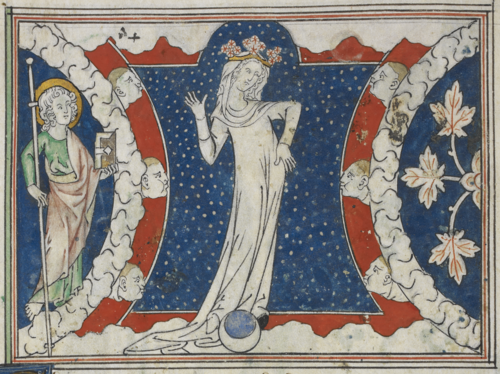 Detail of the woman clothed with the sun, with the moon beneath her feet, from the Queen Mary Apocalypse, S.E. England or East Anglia, 1st quarter of the 14th century, Royal MS 19 B XV, f. 20v

Medieval illuminators applied their talent and imaginations on this text, and the results are wonderfully varied. In the above image from the Queen Mary Apocalypse, the woman is svelte and elegant, posing nonchalantly in her rather ‘bling’ crown, with the moon at her feet. There is no beast in sight yet, and St John and the winds are watching her in admiration. On the following page (f. 21r), featured in our last blogpost, the horrific seven-headed beast occupies the whole page and the woman is shown in an inset picture, giving up her new-born child to an angel. 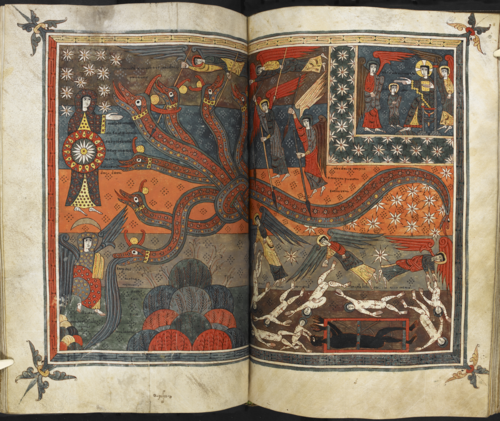 This next image from the 11th-century Spanish manuscript, the Silos Apocalypse, is part of a brilliantly coloured tapestry, featuring a rather whimsical monster who looks almost friendly: all seven heads appear to be smiling. In the upper part of the image is a woman holding a magnificent floral shield, her head surrounded by daisy-like stars, while she gestures towards the beast.

The lower half of the page shows water flowing out of one of the beast’s mouths towards the  brightly-clothed woman, who now has wings. The water is being swallowed up by the earth, as described in the following verses from Revelation, 12:13-16: 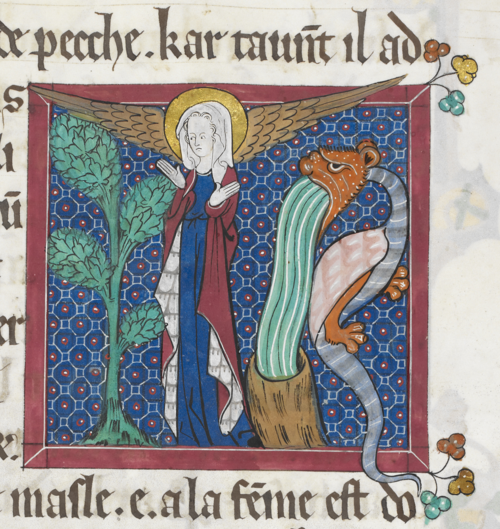 In this image from the Welles Apocalypse, produced in England between 1300 and 1325, the stars are part of the patterned background and the beast has only one head, with water spewing out of it into what appears to be a hollow tree trunk. The woman resembles Mary with a blue robe and halo. 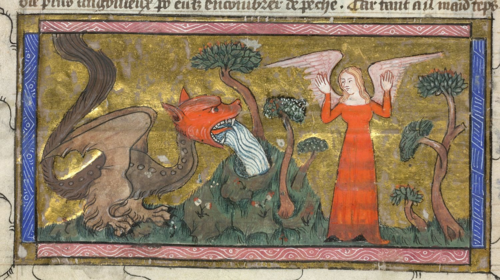 A manuscript made late in the 14th century in Paris, Yates Thompson 10, also has a woman raising her hands in terror. The dragon has only one head once again, but is more lifelike than the one in the Welles Apocalypse, and so is the landscape, though the sky is golden. 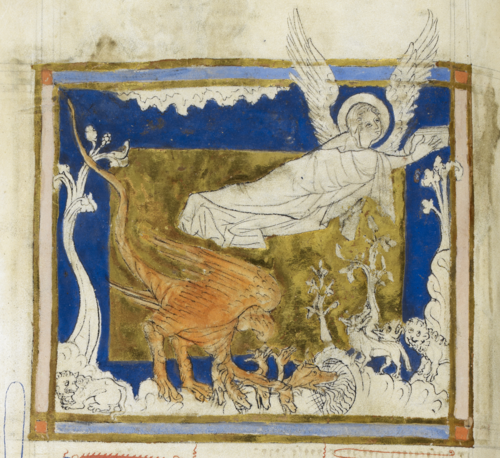 Detail of the woman clothed with the sun and the  seven-headed beast spewing water into the earth, from the Abingdon Apocalypse, England (?London), 3rd quarter of the 13th century, Add MS 42555, f. 36v

The Abingdon Apocalypse, from the 13th century, shows a woman flying away from the griffon-like beast with seven heads, one of which spews water into a tunnel in the earth. Beneath her, wolves and lions are looking on. A golden screen against a blue sky represents her cloak of the sun and she is holding a book-like object.

These are not the only beasts, in fact Apocalypse manuscripts are full of an awesome array of imaginative creatures that must have struck terror into the hearts of anyone brave enough to open these books.

Here is a selection of Apocalyptic beasts, but we must include a disclaimer: this material could give you serious nightmares. 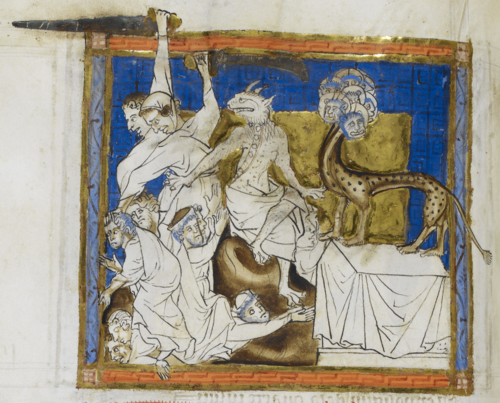 Detail of the second beast of the Apocalypse on an altar and the third beast watching saints being killed (left), Add MS 42555, f. 43v 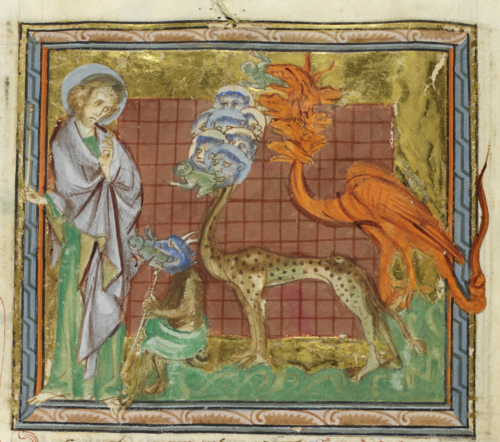 Detail of John looking at the three beasts of the Apocalypse with frogs coming out of their mouths, Add MS 42555, f. 60v 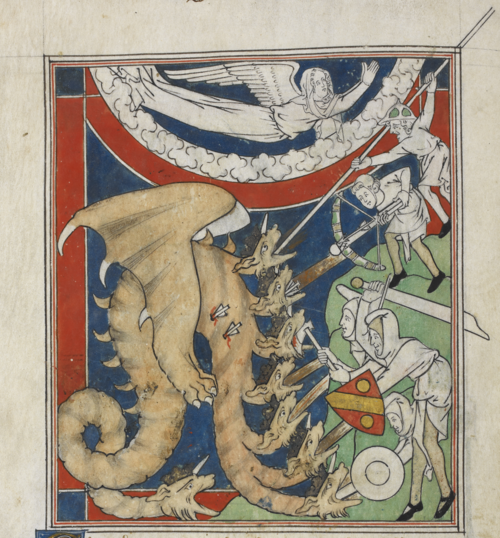 A few brave knights are prepared to take on this ferocious creature, while the woman in clothed with the sun flies away. 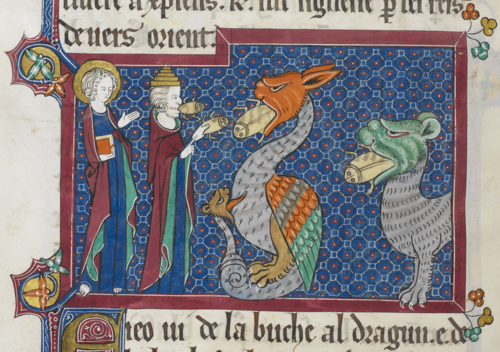 Detail of John standing before the false prophet, the dragon, and the beast, with frogs emerging from their mouths representing their unclean spirits, Royal MS 15 D II, f. 174v

These two beasts and the false prophet have frogs in their mouths, according to the text, but they look more like fish, or maybe large tadpoles. 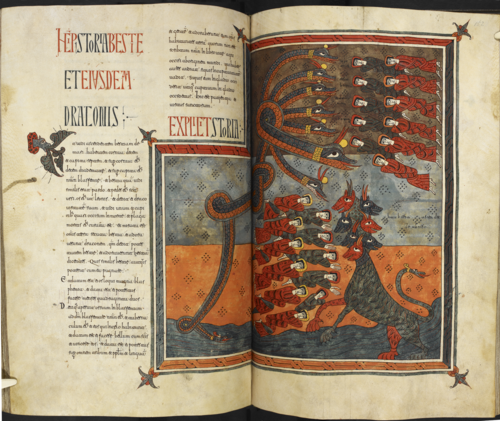 And finally, two of the most terrifying beasts of all - and they are being worshipped!

Thanks for this post, and the blog in general.

However, the name of the biblical book is Revelation, not Revelations. The BL should get this right!

Apologies - this has now been corrected!

Glad you enjoy the blog.