Roll up and find your 13th-century ancestor in our latest addition to Digitised Manuscripts!  Heirs of knights or otherwise, you can now enjoy the 324 painted coat of arms on the ‘Dering Roll’ in minute detail. This beautiful roll of arms gains its name from its 16th-century owner, Sir Edward Dering, first baronet (b. 1598, d. 1644), antiquary and lieutenant of Dover Castle in Kent. Not only did Dering accumulate quite the collection of historical documents relating both to Kent and to his ancestors, but he also set up an association called ‘Antiquitas Rediviva’ to collect ‘all memorable notes for historicall illustration of this kingdome’. This impulse wasn’t always kept separate from what might be termed ‘historicall embellishment’, as witnessed by the odd occasion when Dering adjusted names on items in his collection in order to support his claims for the antiquity of his family. 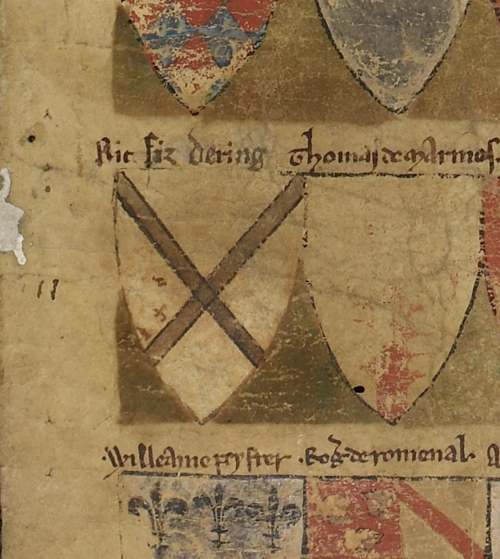 A fine example of this occurs on shield no. 61 where both the original arms and name of ‘Nicole de Criel’ have been erased. Nicholas de Criol’s shield was divided horizontally with red paint applied to the lower half, some of which is still visible behind the saltire cross of Sir Edward’s ancestor ‘Ric fiz Dering’. The scribe making the adjustment (presumably Dering himself) has gone to some effort to maintain as much of the original lettering as possible: ‘Nic’ is easily transformed into ‘Ric’ with a cross stroke, ‘o’ is simply expunged, and the ‘l’ in ‘Nicole’ provides a ready-made ascender for the ‘f’ in ‘fiz’. Even the ‘ri’ are recycled from ‘Criel’ to ‘Dering’. Sadly for Sir Nicholas and his own historical record, his name provided a convenient target for Sir Edward who could incorporate six letters written by the original scribe with six new ones, in an attempt seamlessly to blend past and present concerns. 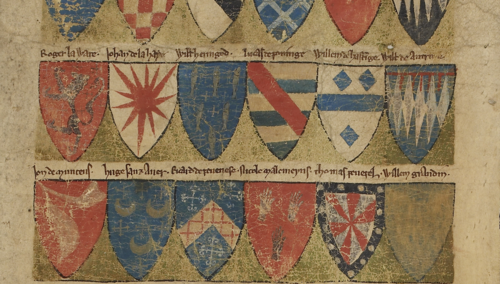 Detail of the fourth and fifth rows of arms on the second membrane, from Add Roll 77720

In designing a new coat of arms, it was (and still is) necessary for it to be distinct from others already in existence, and it was especially useful if it brought to mind the name of the bearer. Puns provide a helping hand, especially if they are of a simple visual kind, and the Dering Roll can be seen to boast a fine line in pictograms. Shield no. 105 (Azure crusily and six herrings or) belonged to William Heringaud (d. 1326). The use of herrings (Ofr. harenc) is what is known as a ‘canting device’, where the word chosen enunciates the name.  Similarly, shield no. 112 shows three hands (Ofr. mains) and this design belonged to Nicholas Malmains (d. 1292). 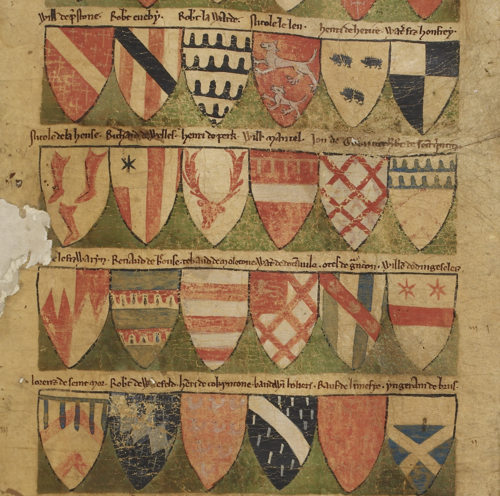 Detail of the third to sixth rows of arms on the fourth membrane, from Add Roll 77720 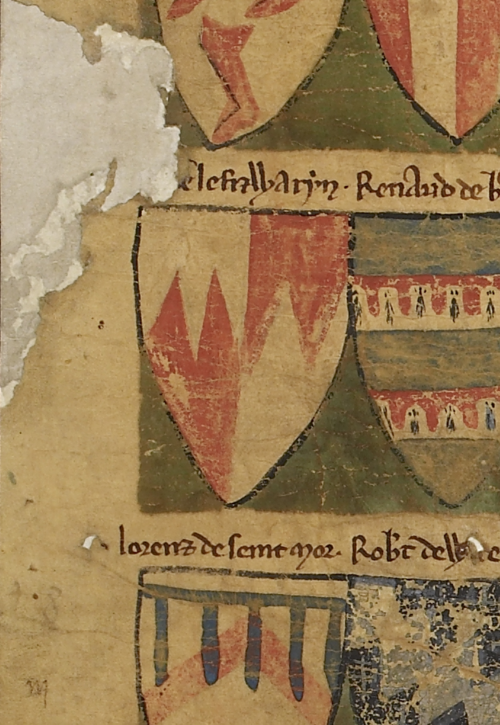 Literary historians might be interested in shield no. 271, belonging to Fulk FitzWarin of Whittington (d. 1315). This name will be familiar to readers of the anonymous Anglo-Norman romance Fouke le Fitz Waryn, a fictionalised family history from the Conquest to this Fulk’s grandfather (d. c. 1256). The narrative is based on a verse original of c. 1280 but survives in an Anglo-Norman prose version  of c. 1330, now Royal MS 12 C XII, ff. 33–61. The fantastical elements in this family chronicle – Fouke’s fights with Swedish dragons and Irish giants – are balanced by the genealogical concerns of marriage and birth: the prestige of a folkloric heroism meets a more practical purpose in supporting the family’s claims to inherited lands. This impulse for validation recalls Edward Dering’s adjustments to the roll more than three centuries later.

Heraldic punning is not forgotten here either. The chronicle-romance provides a technical description of the FitzWarin coat as: un escu quartilee de goules e d’argent  endentee; the pun dentz aguz or ‘sharp teeth’ alludes to the indented line in these arms. This particular pun is rather subtle, relying on knowledge of heraldic designs and their associated terms. Much more common, in fact, are the simple pictograms such as the herrings, hedgehogs and hosiery shown above. 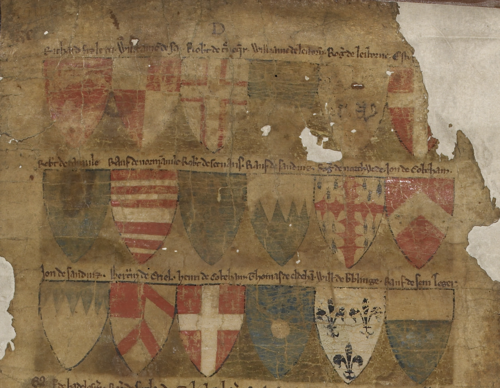 Detail of the first three rows of arms, from Add Roll 77720, membrane 1

The reign of Edward I (1272–1307) is seen as the golden age for the production of rolls of arms in England and these documents were designed for the identification of knights in battle and in tournaments. The Dering Roll is the earliest extant roll of arms from this period, dating from c. 1270 – c. 1280, and it accounts for an astonishing one-quarter of the entire English baronage of this time. The 324 painted shields stretch over two and a half metres of vellum and this long list of England’s movers and shakers begins with King John’s illegitimate son, Richard FitzRoy of Kent (d. bef. 1253). More interesting, perhaps, is the prominence given to Stephen of Penchester (shield no. 6) who served as constable of Dover Castle from 1268 until his death in 1298. Indeed, knights of Kent and Sussex dominate and it has been argued that the Dering Roll was designed to supply a list of knights owing feudal service to the Constable of Dover Castle. This has led to the suggestion that Penchester commissioned the Dering Roll, given the coincidence of its dating with his tenure in office.

We hope to learn much more about this fascinating roll now that it is available for detailed scrutiny by scholars, genealogists and members of the public alike. Following its sale at Sotheby’s in late 2007, an export licence was blocked and a fundraising campaign led to its purchase by the British Library. We are grateful for the generous aid received from the National Heritage Memorial Fund, The Art Fund, Friends of the British Library, Friends of the National Libraries and from numerous individual supporters, all of whom helped to save this treasure for the nation.