Lindisfarne Gospels in our Treasures Gallery

The Lindisfarne Gospels, one of the greatest treasures in the British Library’s collections, is now back on display in The Sir John Ritblat Gallery. This Latin Gospel-book is thought to be the work of one remarkably gifted scribe and artist, who created it around 700 on the Holy Island of Lindisfarne, Northumbria. Its importance lies not only in the beauty of its carpet-pages and its miniatures of the four Evangelists, but also in the tenth-century gloss of its text that is the earliest example of the Gospels in the English language. 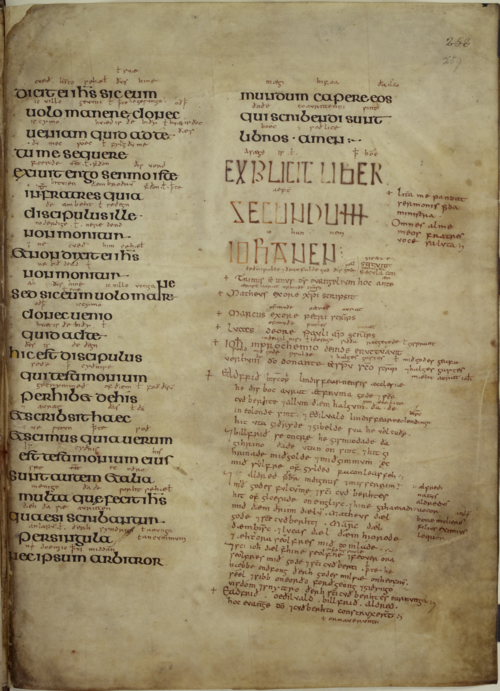 According to the colophon added by this translator, Aldred (fl. c. 970), who was provost of the community at Chester-le-Street near Durham, the artist-scribe was a monk called Eadfrith, who was Bishop of Lindisfarne from 698 to 721. The inscription records that Eadfrith ‘wrote this book for God and St Cuthbert and also for all the Saints whose relics are on the island’. It also describes the binding made by Billfrith the anchorite, which included a cover adorned with gold, silver and precious gems. On display for the next three months are two pages from the canon tables that preface the Lindisfarne Gospels (ff. 12v-13r). These provide readers with a concordance to the Four Gospels, allowing them to locate episodes described by more than one Evangelist. A mistake has been made in Canon 2 (shown), where the name titles at the heads of the three columns have been confused with those of Canon 3 on the facing page. The headings which read ‘Luke’ and ‘John’ have been corrected by a near-contemporary hand to read ‘Mark’ and ‘Luke’. Interlace birds fill the columns and the arch, while a ribbon knotwork design is used for the bases and capitals. 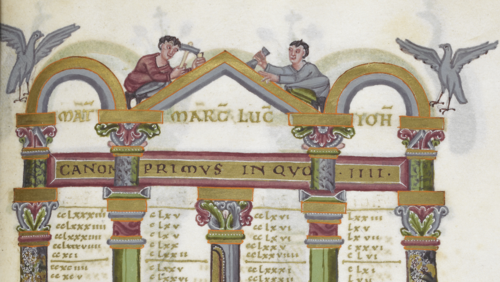 Visitors to the Gallery will be able to compare the canon tables in the Lindisfarne Gospels with those in the Echternach Gospels, made in the monastery of St Willibrord (in modern day Luxembourg) in the eleventh century. The two tables on display (ff. 8v-9r) show elaborate ornamental pillars upon which masons are still working with hammers and chisels. In another case nearby there is also the much earlier ‘Golden Canon Tables’ from the Eastern Mediterranean. Written over gold leaf, these tables are set within elaborately adorned architectural frames, including some finely executed birds and fish. These pages were later trimmed to fit a smaller twelfth-century manuscript of the Gospels, causing the loss of some of these details.

The Sir John Ritblat Gallery: Treasures of the British Library is open seven days a week, and is free to visit. If you would like to see the Lindisfarne Gospels, the Echternach Gospels or the Golden Canon Tables in their entirety, please see the British Library’s Digitised Manuscripts site.

You should remind people that the design behind your header comes from Lindisfarne...stunning stuff!