The Harley Psalter: Devils in the Details 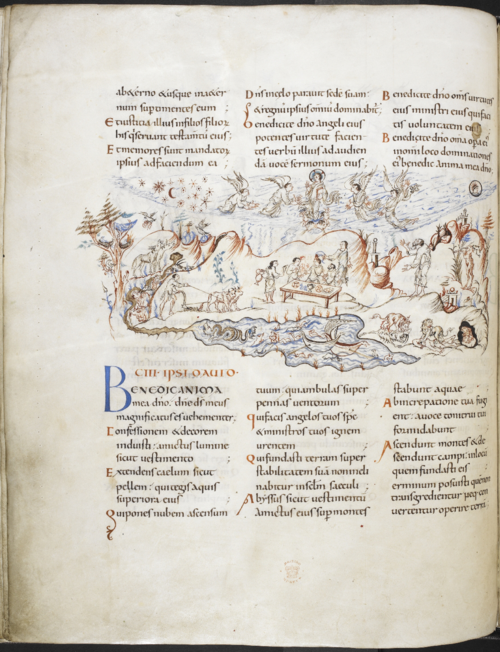 Miniature illustrating Psalm 103 (Vulgate numbering): The creations of the Lord: valleys and mountains (left) with springs where beasts and birds are drinking, a man ploughing with oxen, a sea with ships on it and beasts in the water (centre); lions and other beasts among the rocks (right), from the Harley Psalter, S.E. England (Canterbury), 1st half of the 11th century, Harley MS 603, f. 51v

The Harley Psalter is one of three manuscripts copied from the very well-travelled Utrecht Psalter, a Carolingian masterpiece made around 825 at the Benedictine monastery of Hautvilliers near Rheims in Northern France. Now MS 32 at the Universiteitsbibliotheek in Utrecht, the Utrecht Psalter spent at least two hundred years in Canterbury from about 1000 AD, where it was the inspiration for our very own Harley Psalter, Harley MS 603. Dating from the first half of the 11th century, the Harley Psalter has a very similar arrangement and many near-identical images to those of the Utrecht Psalter, though the version of the Psalms is different. In each one of the large pen drawings, the artist has attempted to represent the words of the Psalms in pictorial form - not always an easy task. The images often include four or five episodes from the text of the Psalm that follows, depicted in a vibrant yet intimate style. They are extraordinarily detailed, filled with tiny people and animals and many details, some amusing, and some bizarre.  This is the medieval ‘Where’s Wally?’: the reward for hours of searching is an unexpected delight from time to time.

Miniature illustrating Psalm 5: The psalmist entering a sanctuary (left), from which a winged demon is fleeing (centre), and above him an angel placing a wreath on a martyr's head; on the right, demons are prodding the wicked in a pit of fire, Harley MS 603, f. 3r

There are, of course, the standard variations on the theme of the righteous and unrighteous, such as holy tabernacles and fiery pits, the psalmist appealing to God and his angels for help against foes and demons. 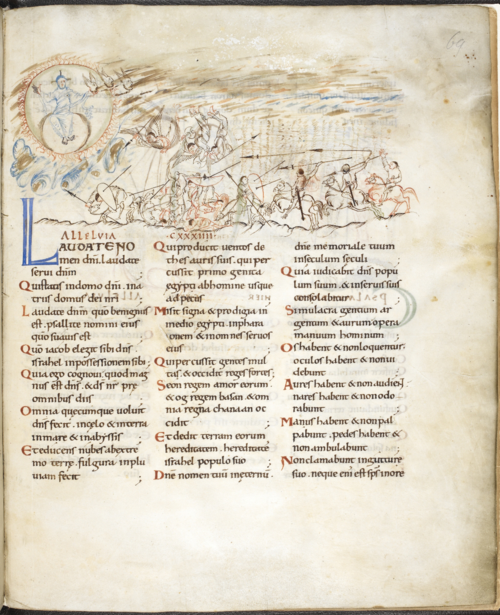 Miniature illustrating Psalm 134: The Lord unleashing the fury of the wind and rain and his angels with spears slaying kings and their armies, Harley MS 603, f. 69r

God’s vengeance is portrayed repeatedly and with relish, as are the agitated gestures of the figures who suffer the consequences, particularly kings and judges.

So much for the standard fare. Here are a few unusual and interesting details we found to enjoy (apart from a medieval umbrella!). Please look for your own favourites in the online images and share them with us via Twitter: unlike the ‘Where’s Wally?’ books, Digitised Manuscripts allows you to zoom in for added searchability. 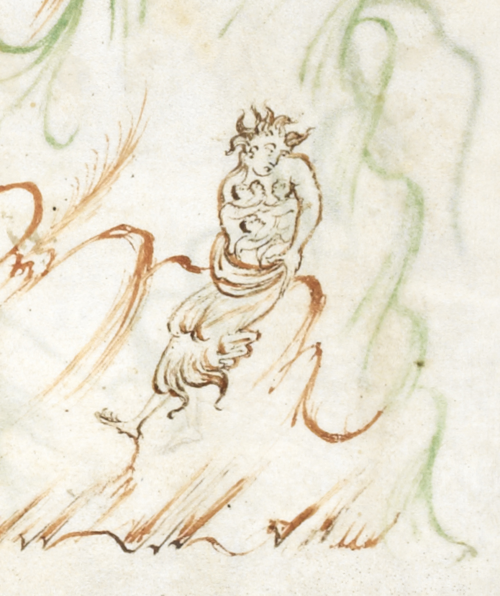 Here is a female demon with her brood of quadruplets. She seems to have her hands full! 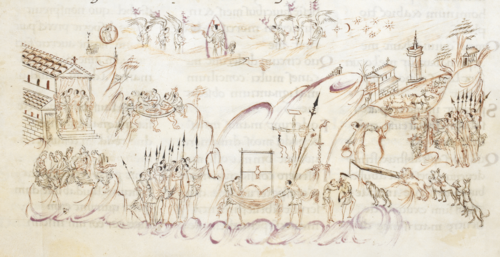 Miniature illustrating Psalm 21: The themes include: (1) the lamentation of the psalmist, who is shown holding two vials, and is attacked by bulls, dogs and lions, with a unicorn below (lower right); (2) prophetic images of Christ’s passion including an empty cross and two men dividing a garment in front of a lot machine (centre); and (3) praise to heaven, represented by the tabernacle with the meek eating at a circular table and seven women seated with babies (the seed of Israel), Harley MS 603, f. 12r

As those of you who follow this blog will know, we have a soft spot for unicorns. Here is one that seems to be facing up to two men with scythes. One has to wonder what the outcome of that contest will be. Our money is on the unicorn, naturally. 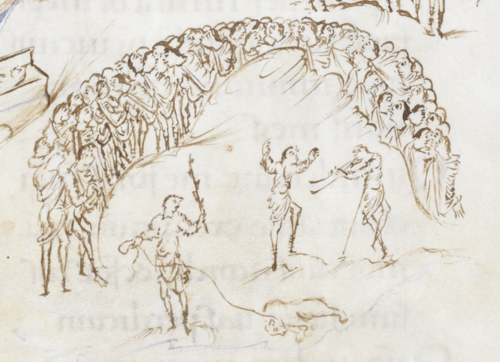 Continuing with the animal theme, this image includes a dancing bear and acrobats, presumably as a condemnation of frivolous pastimes.

Miniature illustrating Psalm 108: Below Christ in a mandorla with angels, a wicked man is seized by a demon (left) and the psalmist with a locust, standing in oil from an oil-horn (right); the sinner is punished (lower left), his wife and children abandoned and his treasures taken from his chest, Harley MS 603, f. 56r

And here a locust is an onlooker to the punishment of a sinful man. The sinner’s treasure is looted, his wife tears her hair out and his children are abandoned, naked. 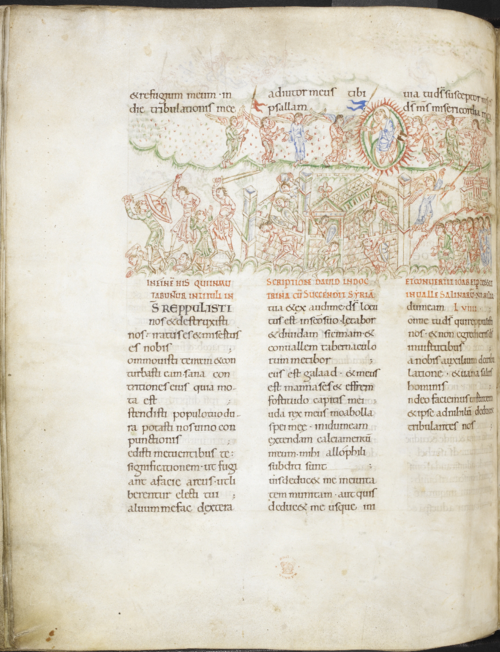 Added miniature illustrating Psalm 59: The Lord in a mandorla handing a pair of shoes to an angel; the defenders of the city of Edom(?) are facing the attacking soldiers, Harley MS 603, f. 32v

Finally, did you know that angels wore shoes? No, nor did we, but in the picture the Lord is handing a pair to an angel (illustrating the line, ‘Over Edom will I cast out my shoe’). The style of this image is different: it is one of the drawings added to the Psalter in the 12th century.

There are 112 of these fascinating and skilful illustrations in the Harley Psalter, an impressive achievement by any standard. The artistic style, originally from Reims, was influential in the development of late Anglo-Saxon book decoration and the coloured line drawings that became especially popular in England at the time. For further examples of this style, check out the Tiberius Psalter (Cotton MS Tiberius C VI), which dates to the third quarter of the 11th century. Two copies of the Psychomachia at the British Library also contain similar decoration: Cotton MS Cleopatra C VIII and Additional MS 24199 (the latter will soon make an appearance on the Catalogue of Illuminated Manuscripts).