The Phillipps Lectionary: a window into 11th-century Byzantine illumination

In 2006 and 2007, the British Library acquired five Greek manuscripts that had formerly been on long-term deposit as Loan 36. These manuscripts all once belonged to Sir Thomas Phillipps, the noted manuscript collector of the 19th century. All but one (now Add MS 82951) also belonged to Frederick North, 5th Earl of Guilford, much of whose manuscript collection is now in the British Library. The story of the provenance of these manuscripts will be the subject of a future blog post, when the remaining four manuscripts have also been digitised. Today, however, our focus is on the standout item in the group, Additional MS 82957, a very fine 11th-century Gospel Lectionary from Constantinople. 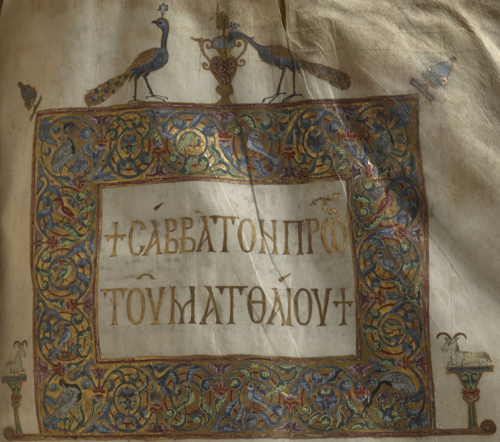 Add MS 82957, f 59r. Decorated headpiece with two peacocks, one drinking from a fountain, on top, and two rams on pedestals on either side

The lectionary is extremely fragile and required extensive, painstaking conservation work for over a year before it was fit for digitisation. Future blog posts will outline the damage that the manuscript has sustained, and the particular difficulties of digitising and conserving this item. 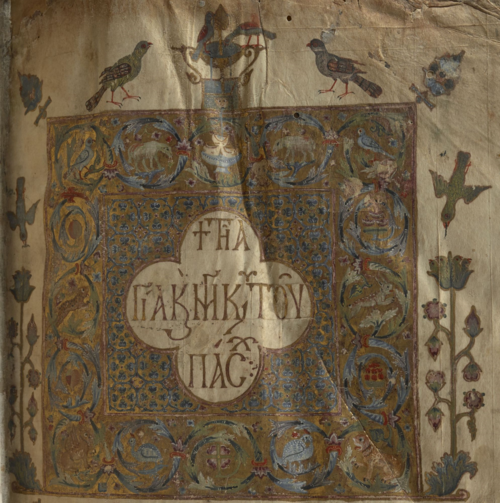 The manuscript itself is spectacular. It goes beyond the usual levels of ornamentation for Greek lectionaries of the period to incorporate richly-decorated initials and headpieces. In fact, it is closer in style to some of the great psalters of the eleventh century: including the Theodore Psalter and the Bristol Psalter, both now kept at the British Library. Indeed, the similarities between  some of the decorated initials in this manuscript and that of the Theodore Psalter led to the hypothesis that both were produced at the Stoudios Monastery in Constantinople. More recently, however, a detailed study of a wide range of eleventh-century manuscripts led Irmgard Hutter to suggest that the manuscript should be placed in the circle of the so-called ‘copiste du Métaphraste’, a scribe whose hand can be detected in a number of manuscripts of Symeon Metaphrastes (for bibliographical details, please consult Digitised Manuscripts). 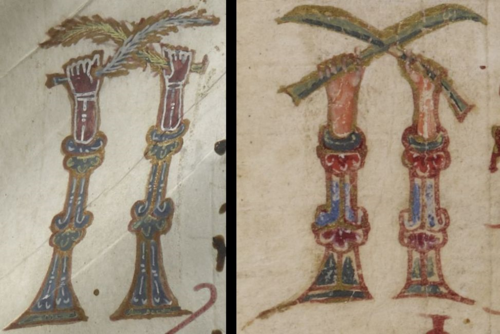 Particularly noteworthy are two anthropomorphic initials found at the beginning of the first two sections, below the adorned headpieces:

Sadly, the fragility of the manuscript means that there is some loss into the gutter in the case of these two initials, but the level of artistic skill is clear nonetheless.

We finish with a lost initial. f 280 was damaged at some point in the manuscript’s history: 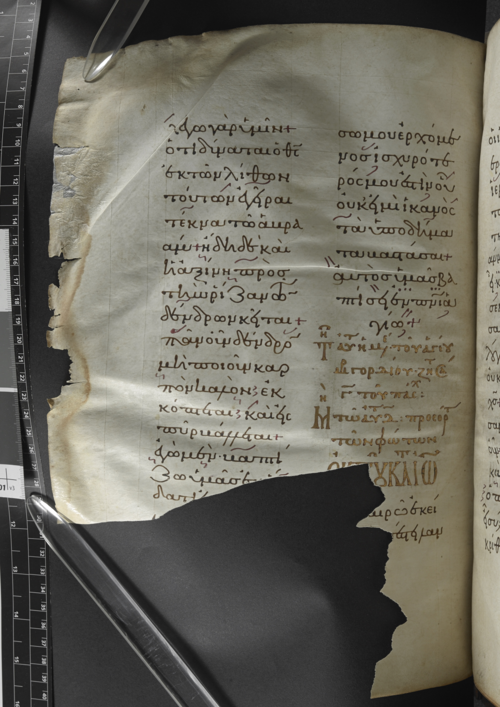 However, the imprint made by a decorated initial on the portion of the page now lost can still be seen on the facing page. It is the letter tau (T) with a bird at the base. The imprint is a little difficult to make out, but is perhaps clearer when put alongside a similar tau from earlier in the manuscript: 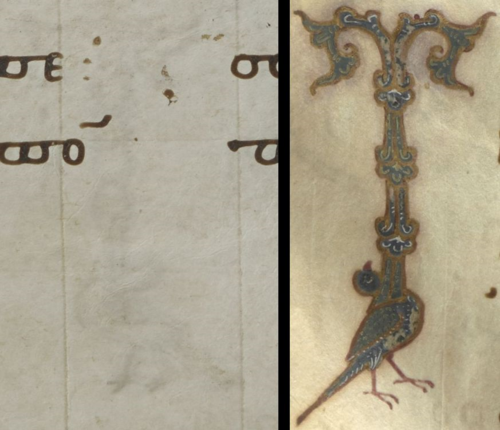 There is much more to be discovered in this manuscript, and surely a great deal more to be said about its place in the wider context of 11th-century illumination. The digitisation of this fragile item makes it available to a wide audience, and we invite you to explore its riches.