New Images on the Catalogue of Illuminated Manuscripts

Exciting news for those of our readers who might want to search for an image of a 13th-century devil with horns, an English drawing of a horse from the 10th century, rain over the Italian countryside, severed limbs or even Job afflicted with boils. More than 200 new images are now available online in our Catalogue of Illuminated Manuscripts. For those who have not yet used this catalogue, it has an advanced search page which allows you to search for key words combined with place of origin, date range and many other criteria: http://www.bl.uk/catalogues/illuminatedmanuscripts/search2.asp.

Over 4000 illuminated manuscripts from 800 to 1800 have been catalogued to date and we have now added a new selection with images and descriptions that were not previously available online, mostly from the Additionals series.  The following examples show the range and variety of the items newly catalogued:

This features colour-wash images of some dramatic and bloodthirsty scenes: 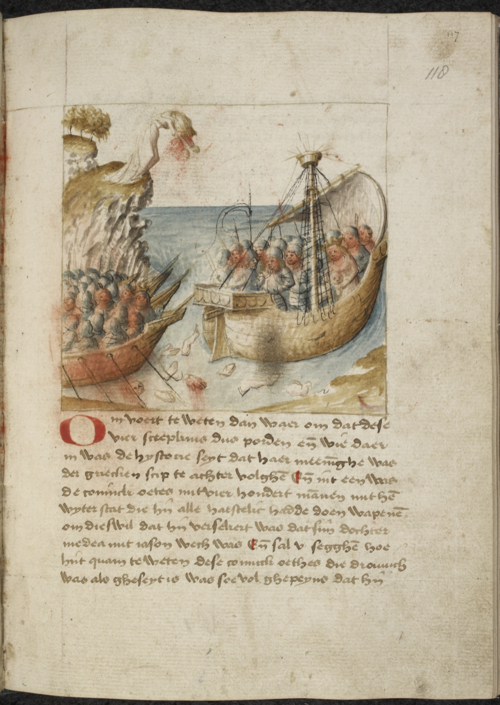 Medea with Jason and the Argonauts in a ship, about to throw the head of her brother into the sea with his severed limbs, to stop her father, King Oethes, who is pursuing them in the other ship; above left, Jason’s abandoned lover Hypsipyle is about to jump off a cliff; from ‘Historie van Jason’, Germany or Netherlands, N. (Harlem), between 1475 and 1480, Add MS 10290,  f. 118

Named after Alfred Huth, who donated his collection of manuscripts to the British Museum in 1912, this is a pocket-sized psalter in Latin from Lincoln or York, with an Anglo-Norman text for calculating Easter added at the beginning. It contains 11 full-page miniatures in the style of the William of Devon manuscripts (Royal MS 1 D I, Egerton MS 1151, and others. Simple search using the keywords ‘William of Devon’ and you will find them all in the catalogue. To continue with the gory theme, this one shows  a young child being held aloft on a spear by one of Herod’s soldiers: 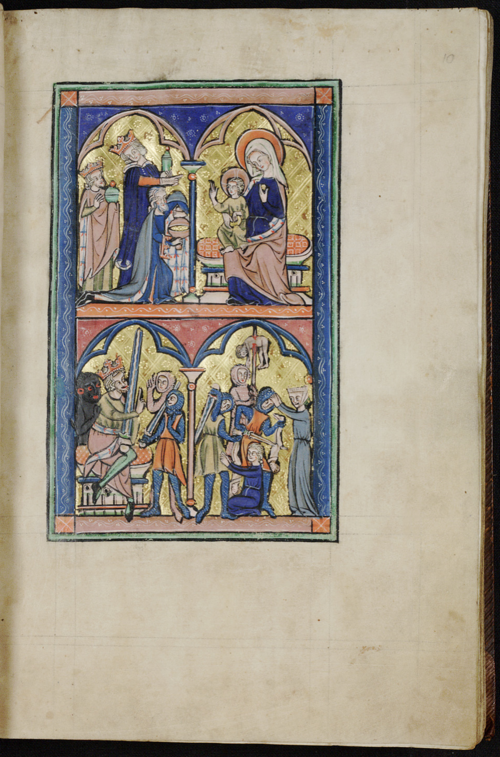 This manuscript contains treatises on French spelling and grammar, as well as Manieres de langage, a text used for teaching the French language in England in the 15th century. It includes several short tales in French, apparently as examples for reading or language practice, one of which has the intriguing title Le mari cocu, battu et content (‘The husband who is cheated on, beaten up and happy’). The story is about a pair of young lovers who concoct an elaborate ruse. The beautiful young wife tells her elderly husband Mr Bon (who has only three grey hairs left) that the falconer (her lover) is a blackguard who wants to seduce her. If he (Bon) disguises himself as her and waits in the garden that night, he will catch him at his tricks. Bon duly waits in the garden for several hours while the lovers have fun inside. Finally the falconer goes to the garden and pretends to make love to Bon dressed as a woman. When Bon responds, the falconer pretends to be horrified and says that he was only there to test his master’s wife’s honour. He beats Bon with a stick in supposed punishment and sends him inside, where Bon finds his wife lying ‘innocently’ in bed, waiting for him. Bon is delighted that his wife and falconer have been so honourable towards him and resolves to treat the falconer as part of the family.  Of course the lovers are delighted!

The manuscript also contains a Latin poem on algorithms and treatise on the movement of the planets, part of which is shown here: 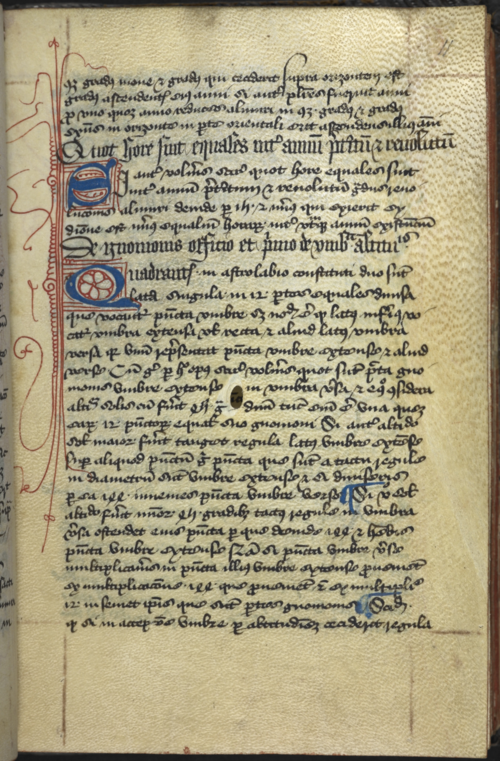 Text page with pen-flourished initials of an astronomical treatise, from a Scientific and Grammatical Miscellany,  England, 1st half of the 15th century, Add MS 17716, f. 11r.

This is a 10th-century copy of the allegorical poem by Aurelius Prudentius Clemens (348-c. 405), made in the south of England. It concerns the struggle between the Vices and Virtues for possession of the human soul. The origin of the manuscript is unknown but it was at Bury St Edmunds Abbey in the 14th century (it contains their pressmark) and then in the library of Thomas Tenison, Archbishop of Canterbury from 1694 to 1715. The outline drawings of allegorical figures are finely executed with their garments drawn in some detail, providing examples of the tunics and veils worn by Anglo-Saxon women in this period. 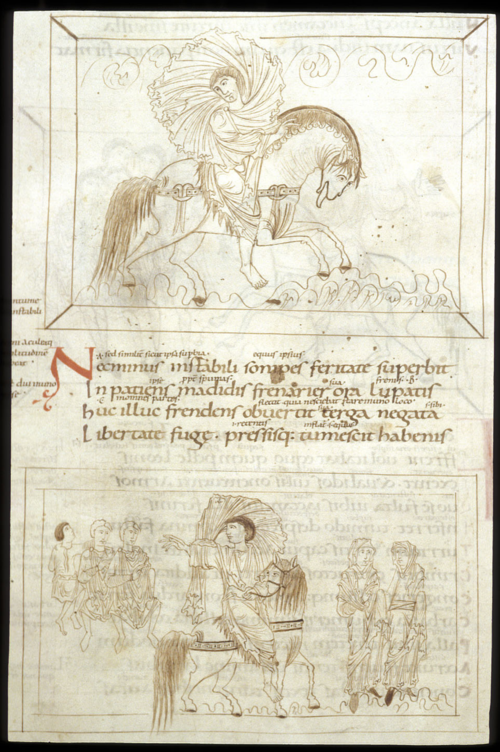 Two ink drawings of Superbia's horse grinding its teeth (above) and Superbia reining in her horse, pointing her hand towards three figures in short robes, probably other vices, while Humility and Hope stand on the right, from Aurelius Prudentius, Psychomachia, England, S., 4th quarter of the 10th century, Add MS 24199, f. 12v

These 16th-century Italian botanical manuscripts contain watercolours of the flora and landscapes of the Ancona region of Italy by the amateur botanist Gherardo Cibo (b. 1512, d. 1600). 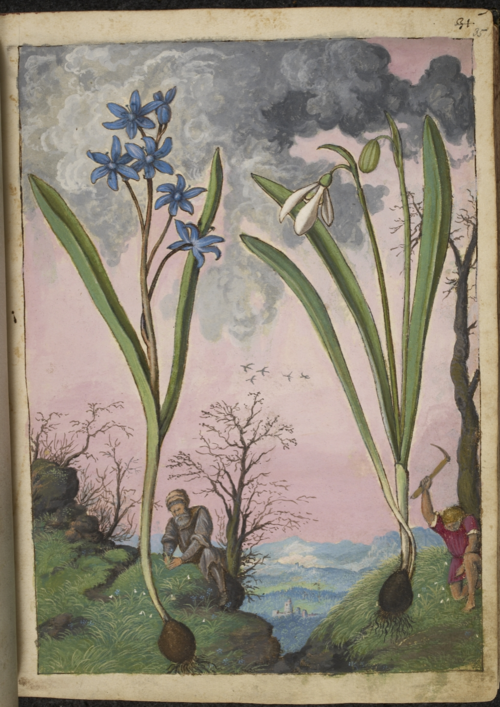 Full page botanical painting of Galanthus (Snowdrop) on the right and a blue-flowering bulb, probably Ipheion on the left, with a botanist and a young man gathering plants on a mountain top, from Gherardo Cibo, Extracts of Dioscorides' 'De re medica', with botanical paintings, Italy, Central (Urbino), c. 1564-1584, Add MS 22332, f. 35r.

Seventy-five gorgeous illuminated pages are newly published for this manuscript.

Let us know on Twitter @BLMedieval of any of your favourite images – new or old – from the Catalogue of Illuminated Manuscripts!