The 1 December conference celebrating the publication of Professor Lucy Freeman Sandler’s new book was a great success, with around 140 delegates attending. Her book, Illuminators and Patrons in Fourteenth-Century England: The Psalter Hours of Humphrey de Bohun and the Manuscripts of the Bohun Family will be described in more detail in a forthcoming post. 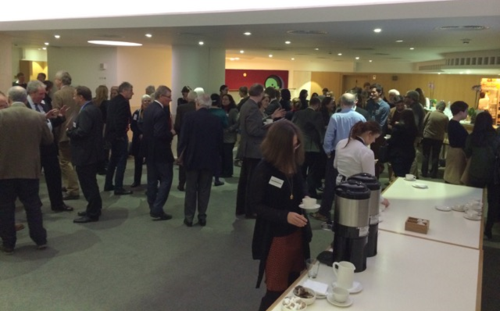 The conference was held in association with AMARC (the Association for Manuscripts and Archives in Research Collections), which welcomed many new members to the organisation. The day began with a welcome from Claire Breay, Head of the Ancient, Medieval and Early Modern Manuscripts section of the Library, followed by papers by six speakers. 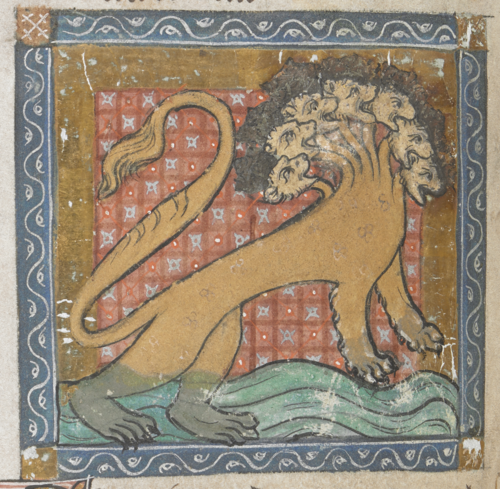 Detail of a miniature of the Beast rising from the sea, from a fragmentary Anglo-Norman Apocalypse, England, early 14th century, Add MS 38842, f. 4v

Paul Binski opened proceedings with his paper on Lombardy and Norfolk, which re-examined the question of Italian influence in English art before 1350 and what is known about Italian art actually in England at that date.  Nigel Morgan then delivered his paper on a little-studied fragmentary Anglo-Norman prose Apocalypse in the British Library, Additional 38842. He compared its iconography with that found in Anglo-Norman and Latin apocalypses, noting in particular instances where the miniatures in Additional 38842 reflected more accurately the narrative in the text, which raised the possibility that the artist could read Anglo-Norman. 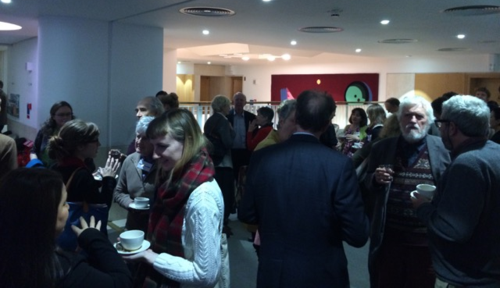 Before the lunch break Bernard Meehan, the new Chair-elect of AMARC presented the outgoing Chair, Christopher De Hamel with a signed copy of Lucy’s new book in thanks for his many years of service. As well as encouraging attendees to join the Association, Bernard also announced the dates of the two upcoming AMARC meetings: 30 April 2015 at Corpus Christi College, Cambridge, and 10-11 September in Dublin. Add them to your diary now! 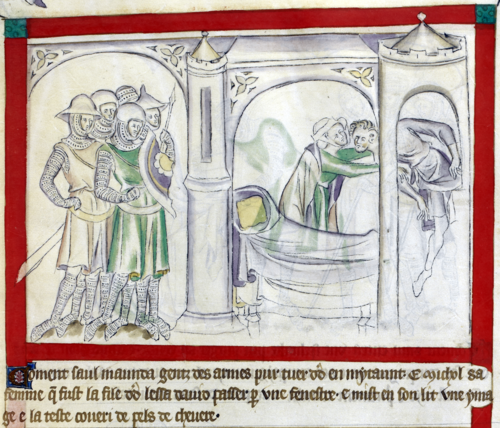 Detail of a miniature of Michal helping David to escape the soldiers of Saul, from the Queen Mary Psalter, England, 1310-1320, Royal MS 2 B VII, f. 52r

The second session was begun by Kathryn Smith, who had travelled from New York for the conference. Kathryn examined the Old Testament prefatory cycle in the Queen Mary Psalter (Royal 2 B.vii), and discussed analogues of and possible sources for some of the Queen Mary Master’s compositions, evidence for the artist’s working methods, and the history and image of the Jews as constructed in pictures and text. Alixe Bovey followed, presenting new evidence for the patronage of the Smithfield Decretals, Royal 10 E. iv, and its connection to the Batayle family.

In the final session, Julian Luxford examined Additional 39758 and Additional 47170 and evidence of the involvement of Walter of Whittlesey, a monk of Peterborough abbey, as the person who commissioned, copied or decorated them. Julian’s paper revealed the character of historical study within one of the major East Anglian monastic foundations and the role that this roll and codex may have played as ‘vindicative’ texts of the abbey’s precedence and property in the region. 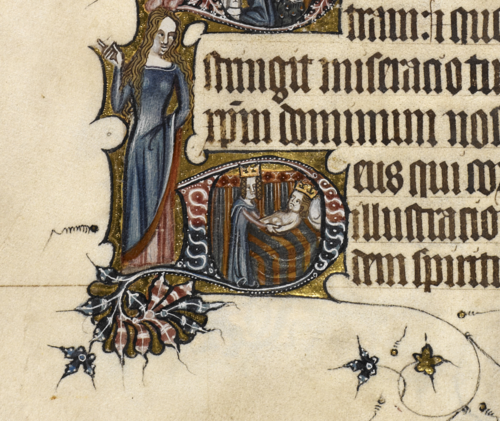 Detail of an historiated initial showing Jezebel talking to Ahab in bed, with the ‘embedded marginalia’ of a lewd woman in the margin, from the Bohun Psalter, England (?London), 2nd half of the 14th century, Egerton MS 3277, f. 110v

The day concluded with a paper by Lucy Freeman Sandler. Drawing on the research conducted for her new book, she challenged the assumed marginality of decoration at the edges of the text of the Bohun Psalter, Egerton 3277. These strange drawings are in fact ‘embedded’ in the area adjacent to the historiated initials, both initial and drawing being enveloped by the same gold background. Lucy highlighted many such decorations that offered analogues or subversions of the narrative summarised by the historiated initials, while acknowledging that the meaning of many remained obscure and the subject for future research. The proceedings were brought to a close with a vote of thanks by Kathleen Doyle, Lead Curator of Illuminated Manuscripts at the British Library. As thanks for her paper, and in acknowledgement of her nearly 60 years’ work on the manuscripts, Lucy was presented with a large poster of one of the initials from the Bohun Psalter. The opportunity to secure a signed copy of Lucy’s new book was seized by many of the conference attendees.  Further copies (unsigned) are still available from the British Library shop!