Tudor Scribe and Spy at No. 2 in the Official Classical Charts

A new recording of a magnificent choirbook produced for King Henry VIII and Catherine of Aragon, one of the great treasures in the British Library’s music collections, reached number 2 in the Classical Charts in the first week of its release in October 2014. 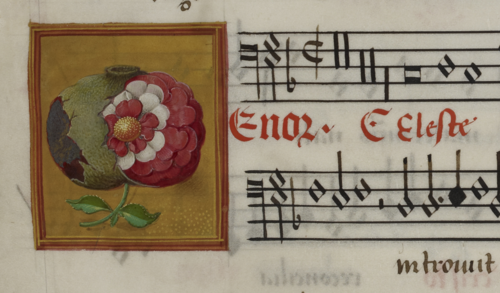 Detail of a historiated initial with the Tudor rose and pomegranate, from the Choirbook of Petrus Alamire, Southern Netherlands, c. 1516, Royal MS 8 G VII, f. 3r

Containing mostly motets for four voices by Josquin des Prez, Pierre de la Rue and other leading Continental composers, this volume is representative of the finest French and Franco-Flemish repertory of the time. To celebrate the first complete recording of all 34 pieces, full coverage of this beautifully illuminated volume is now freely available on Digitised Manuscripts. 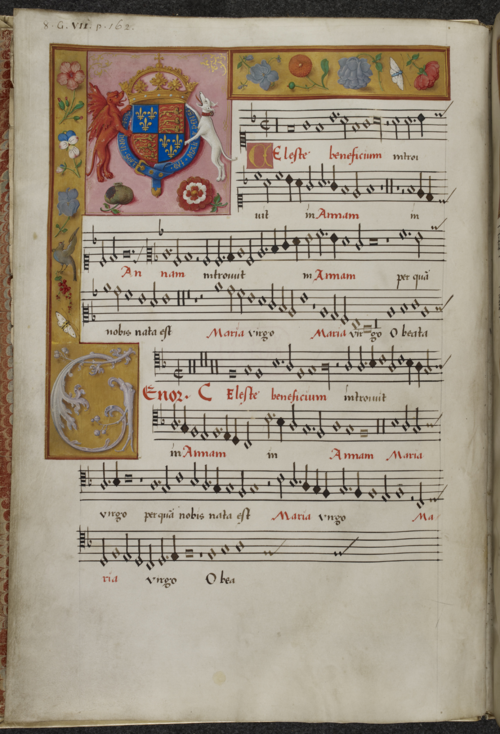 The rich sounds of early sixteenth-century polyphony, as notated in Royal MS 8 G VII, have been recreated by the choir Alamire and the English Cornett and Sackbut Ensemble, under the directorship of Dr David Skinner. Here is a sound-clip of the opening piece:

Released as ‘The Spy’s Choirbook’, the CD’s title refers to the colourful history of its famous scribe, Petrus Alamire (d. 1536), from whom Skinner’s ensemble borrows its name. In addition to making several similar choirbooks for other European courts, Petrus Alamire was a composer, mining engineer, and diplomat. He acted as a spy for Henry VIII, informing him of the movements of Richard de la Pole, the exiled pretender to the English crown. Surviving letters to the King and to Richard de la Pole suggest that Alamire was simultaneously engaged in counter-espionage. Perhaps gifting this manuscript to Henry was one way for Alamire to smooth over his double-dealing. 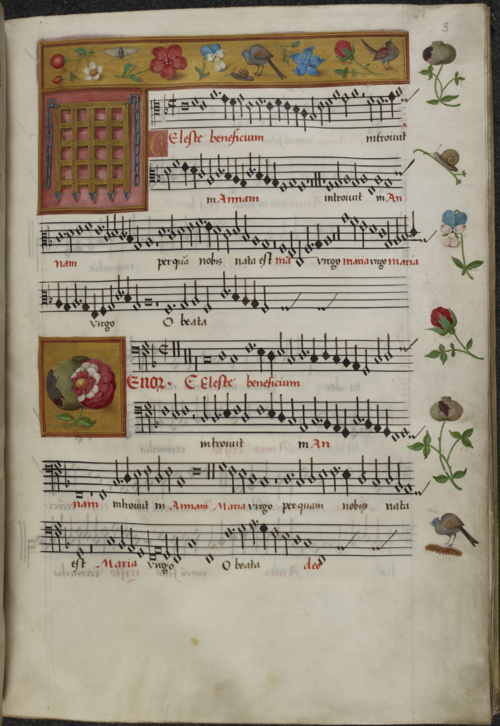 Naturalistic foliage, birds and insects, common to the south Netherlandish style of illumination, are combined with Tudor symbols such as the dragon and greyhound ‘supporters’ of the royal arms (f. 2v), and heraldic badges including the portcullis, the double rose, and the pomegranate (f. 3r). The exact circumstances of its presentation to Henry and Catherine are unknown, and it has been suggested that the manuscript may originally have been intended for Louis XII of France and Anne of Brittany. ‘Celeste beneficium’, for example, was composed for the French couple, and its text calls upon St Anne, mother of the Virgin Mary, to help bring forth children.

Detail of ‘HK’ in the place of stamens in the marginal flora and fauna, Royal MS 8 G VII, f. 2v

It is not difficult, however, to imagine the relevance of this text to Henry and Catherine’s pressing need for a male heir. The following two motets (‘Adiutorium nostrum’ and ‘Nesciens mater virgo virum’) continue this theme, and the fusion of Catherine’s emblem, the pomegranate, with the Tudor double rose, is another probable reference to the desire for progeny (see opening image above). Further evidence to support the idea that this manuscript was designed with Henry in mind appears in a tiny detail amidst the flora and fauna of the marginal decoration: the ‘HK’ which serves to substitute the stamens surely refers to ‘Henricus’ and ‘Katharina’. If the intended patrons did change, this must have occurred extremely early in the manuscript’s production.

Whatever the case, there is little doubt that this book would have greatly appealed to the King. Henry received a thorough musical education: he played several instruments, sang from sight and composed and arranged music. Indeed, it was Henry’s desire to bring the finest musicians in Europe to play and sing at his court which brought Petrus Alamire into close contact.

Now, perhaps for the first time since Henry’s post-dinner entertainment, we can appreciate the full aural and visual magnificence of this unique volume. See here for further details about the CD, and experience Royal MS 8 G VII in its entirety on Digitised Manuscripts.

Fabulous! Must get CD and what a great backstory.

The faces within the elaborated captials are fascinating, especially that on 35r...a portrait cartoon of Henry himself? NOT very complimentary.