A Calendar Page for January 2015 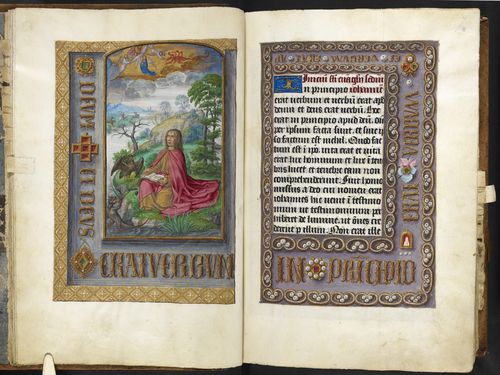 Miniature of John the Evangelist on Patmos with his symbol the eagle, being tormented by a demon and visions above, at the beginning of his suffrage, from the London Rothschild Hours (The Hours of Joanna I of Castile), Netherlands (Ghent?), c. 1500, Add MS 35313, f. 10v-11r

Evidence that the book was Joanna’s is tantalising, but inconclusive.  The repeated presence of Joanna’s name saint, John the Evangelist, is a potential clue, and the presence of a number of Spanish saints in the calendar suggests that it was probably produced for a member of the Spanish aristocracy. Miniature of the Pentecost, with the Virgin Mary at the centre seated at a lectern, Add MS 35313, f. 33v

In any case, this manuscript is certainly a lavish production, and the prominent places given to women and books in the miniatures indicate that it was prepared for a noble lady who was highly literate.  Every miniature in the manuscript – and there are many – is surrounded by a detailed and extravagant border, often containing animals, flowers, or jewels. 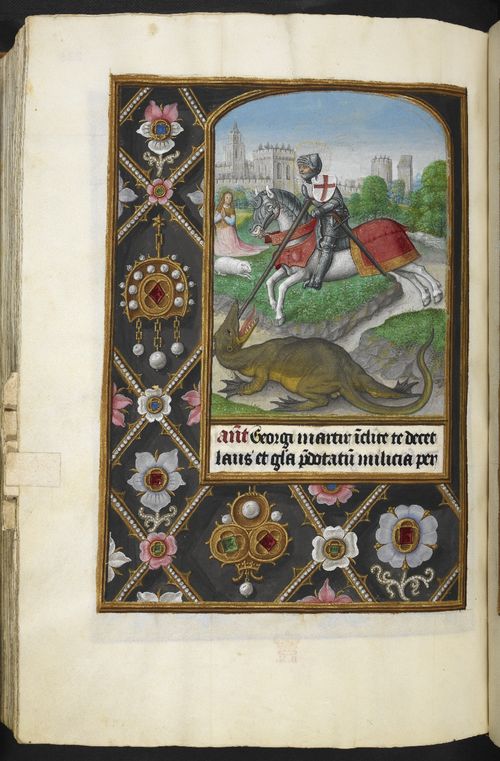 The structure of the calendar echoes the beauty of the rest of the manuscript.  Each folio contains a single month, beginning with a small painting of the sign of the zodiac at the top.  Below this is the listing of the saints’ days for the month, and, unusually, every slot is filled with an observance or feast.  Even more unusual are the roundels on the outer edge of the folio that contain illustrations of the most important saints’ days, those days marked in red on the calendar (which is where we get our contemporary phrase ‘red letter days’).  At the bottom of each calendar page is a miniature of the labour for that month, painted by one of the most accomplished Flemish illuminators of the day. 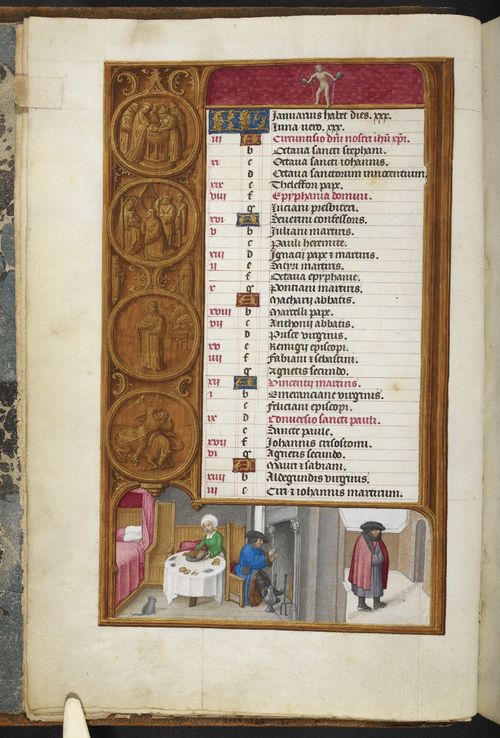 Our calendar for January begins with a particularly charming scene.  The traditional labour for this wintery month is to feast before a fire, and at the bottom of the folio we can see a couple preparing to do just that in their bedchamber, watched by an attentive cat.  Outside, a bundled man appears to be making his own way home.

Detail of a bas-de-page miniature of a couple feasting indoors, and a man standing outside, from a calendar page for January, Add MS 35313, f. 1v

Four saints’ days have been given red letter status in this manuscript, and one notable one is the conversion of St Paul (see below); the constraints of monochrome still allow for some sense of drama for the scene on the road to Damascus. 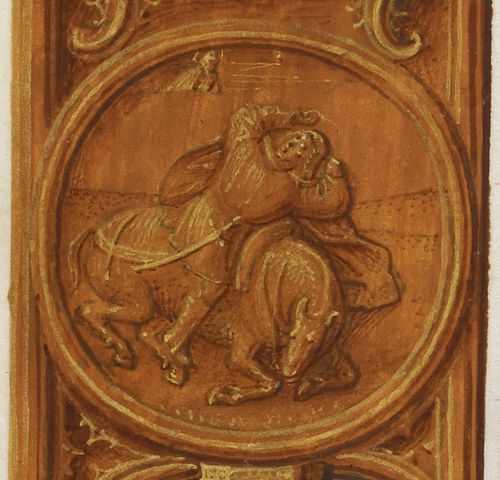 Detail of a roundel miniature of St Paul on the Road to Damascus, from a calendar page for January, Add MS 35313, f. 1v

Thank you! That fireplace scene seems to appear and appear looking so very similar to others, very like what's in Huth...even to the little grey pussycat on the hearth...but clearly by someone who does not realise that in real life she would be much much closer to the fire!

See f162V for trompe l'oeil of a flower pinned to the page...very hoefnagel. Also the decorated planter pot that appears about 3-4 times. Sorry didn't note f numbers. Never seen that before.