In our penultimate Greek Manuscripts Digitisation Project update, we are very glad to announce that another 30 manuscripts have been digitised. There are great riches to be found in this month’s update, particularly for those with interests in theological treatises. Pride of place this month must go to a very fine 11th-century copy of the Orationes of Gregory of Nazianzus, which also incorporates some of the scholia on Gregory attributed to Nonnus. Byzantine learning is well represented by a 15th-century copy of Manuel Moschopoulos’ grammatical treatise, the Erotemata, written by the prolific scribe George Baiophoros in Constantinople, which is preserved in a contemporary binding. More of the many classical manuscripts collected by Charles Burney are also included in this month’s group of uploads, with Burney 75 being a particularly important collection of classical and Byzantine epistolography. Additionally, another group of Biblical manuscripts are to be found in the list below. Finally, perhaps the most curious item of the month is Harley MS 952. Titled Ilias in nuce, (“The Iliad in a nutshell”) or Homeri φληάς  (“The Flead”), it is a late 17th-century mock epic poem written in Homeric Greek on the subject of fleas in Glamorgan.

This project has been generously funded by the Stavros Niarchos Foundation and many others, including the A. G. Leventis Foundation, Sam Fogg, the Sylvia Ioannou Foundation, the Thriplow Charitable Trust, and the Friends of the British Library. 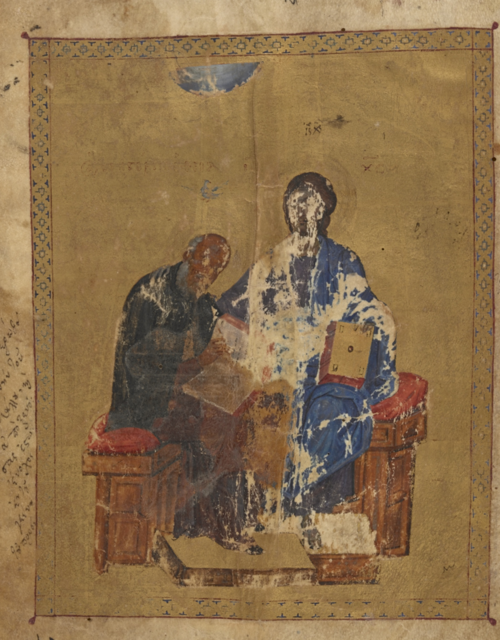 Add MS 27359, John Zonaras, Commentary on the Canons from the Octoechos (in its longer version), imperfect at the beginning and at the end. Completed in 1252, this is one of the earliest dated Greek manuscripts written on Western paper.

Add MS 36589, Lives of Saints for the month of February, and patristic texts. 12th century.

Add MS 39588, Canticles and other Services, imperfect (Rahlfs 1091). According to Rahlfs, this manuscript and Add MS 39587 (Parham MS V) were originally a single manuscript. ff 41-49 are fragments not part of the original manuscript. Initials and decorated headpieces in red. Two rough drawings on f 40v. 12th century.

Add MS 39605, Sermons on the Gospels of John and Matthew, possibly by Metrophanes of Smyrna. Early 10th century.

Add MS 39606, Gregory of Nazianzus, Orationes, followed by extracts from Pseudo-Nonnus, Scholia mythologica. Illuminated head-pieces and initials, paragraph initials in gold. On f 1v is a full-page miniature, much-rubbed, of Gregory seated on Christ's right, each with a book. 11th century.

Add MS 39611, Heirmologion, with musical notation, arranged according to ἤχοι or modes. Four quires, containing the first ἤχος and the first ἤχος πλάγιος, are lost.

Add MS 39618, Theological and religious works, including [Athanasius], Quaestiones ad Antiochum ducem (a longer version of Quaestio 1 than that printed in the Patrologia Graeca), John Climacus Scala Paradisi, and other texts. 16th century. Also digitised is the former (19th-century) binding.

Add MS 40726, Manual of Byzantine ecclesiastical painting, similar to that written by Dionysius of Fourna, Ἑρμηνεία τῆς ζωγραφικῆς τέχνης (edited by Papadopoulos-Kerameus 1909). Two distinct manuscripts (the division is at f 68), in different hands and with different original pagination, are bound together to form the present volume. 18th century. 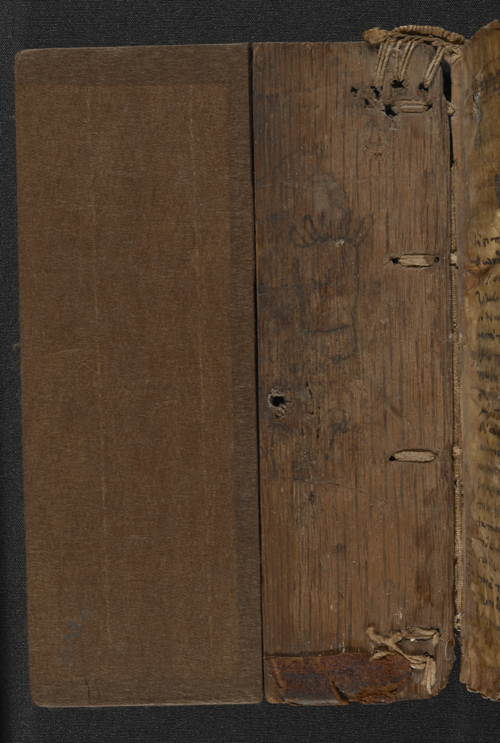 Inner front board of Add MS 64797 (Constantinople, 1st half of the 15th century)

Add MS 64797, Manuel  Moschopoulos, Erotemata. Palimpsest, the undertext dating from 11th-12th cent. and presrving fragments of lives of the saints. f 63r contains fragments from the life of Stephen the Younger by Stephen the Deacon (PG 100:1069-1186), specifically 1108C. 1st half of the 15th century, copied at the Monastery of Prodromos Petra in Constantinople by Georgios Baiophoros. In a contemporary binding of blind-stamped leather over wooden boards with raised spine.

Arundel MS 527, John Koukouzeles and others, Anagrammatismoi for the principal feasts, and hymns, tropes, and other theological miscellanea. Musical notation (with neumes). 3rd quarter of the 15th century. 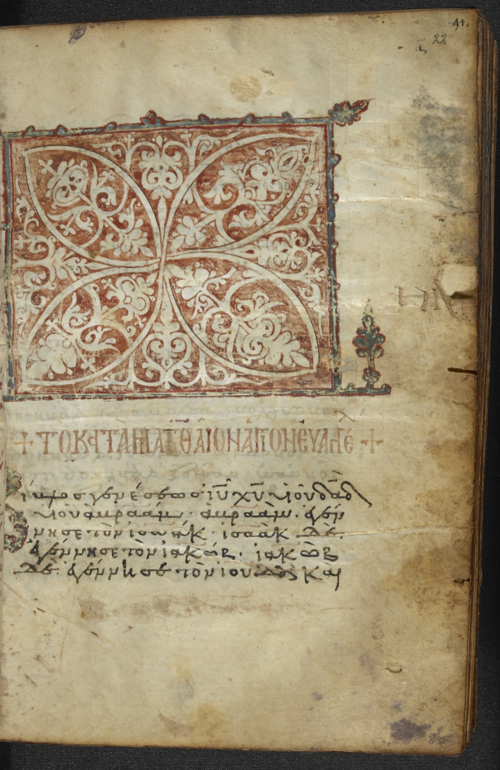 Headpiece at the beginning of the Gospel of Matthew, Burney MS 23, f 22r

Burney MS 45, Homilies on the Gospels for each Sunday of the ecclesiastical year collected by Philotheos Kokkinos, Patriarch of Constantinople. Italy, N. E. (Venice) or Eastern Mediterranean (Crete), 3rd quarter of the 16th century.

Burney MS 55, Manuel Malaxos, Nomocanon, and other texts. 2nd half of the 16th century.

Burney MS 72, Manuel Chrysoloras, Erotemata, with Latin interlinear and marginal glosses, followed by a Latin commentary on the work, and other short works. 4th quarter of the 15th century.

Burney MS 78, Aphthonius and Hermogenes, with prologues and scholia by Maximus Planudes. Italy, N. E. (Venice) or Eastern Mediterranean, 4th quarter of the 14th century-1st quarter of the 15th century. 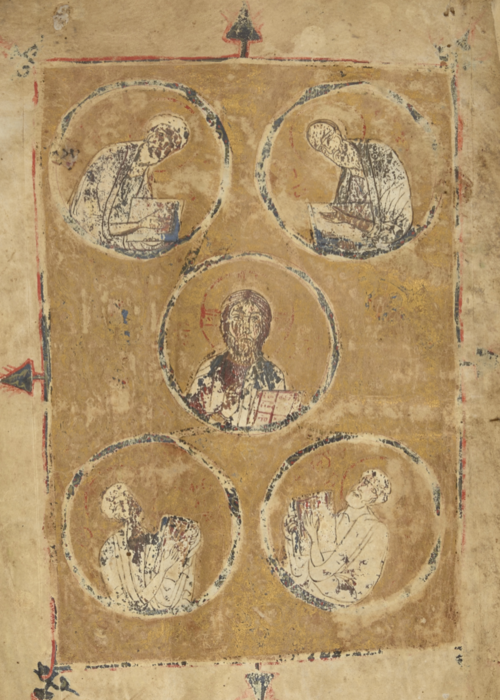 If you would like to support our Greek Manuscripts Digitisation Project, please click here to learn how you can make a donation and help to make our manuscripts accessible online.