Hereford Writ to be displayed at the British Library

The British Library's major Magna Carta exhibition opens in less than two months. We're delighted to announce that Magna Carta: Law, Liberty, Legacy will feature a very important medieval document, on loan from Hereford Cathedral. On 20 June 1215, just a few days after Magna Carta had been granted, King John of England wrote to all of his sheriffs, commanding them to have the Great Charter read out in public. Only one of those documents — known as a royal writ — still survives, the letter sent to the sheriff of Gloucestershire and today kept at Hereford. The British Library is extremely grateful to the Dean and Chapter of Hereford Cathedral for so kindly agreeing to lend us this precious document for the duration of our exhibition, where it will be on display alongside other books and artefacts relating to the history and legacy of Magna Carta. 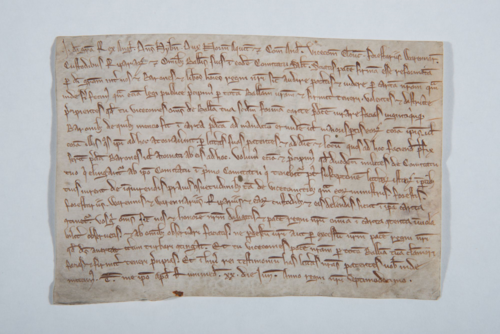 The Hereford writ, a unique survival of the letter commanding that Magna Carta be read out in public in 1215

Magna Carta was granted by King John (1199–1216) at Runnymede on 15 June 1215. Its most controversial feature was the condition that 25 barons be elected to oversee the implementation of the charter, or to seek immediate redress from the king if its terms were being ignored. The Hereford writ is hugely significant: it demonstrates that the sheriffs were commanded to restore the peace, and that they were ordered to swear obedience to the 25 barons. This particular writ is addressed to the sheriff of Gloucestershire — similar documents would have been sent to the other sheriffs, but this is the only one to have survived — and asks that 'you inviolably observe and cause to be observed, by everyone, everything contained in the charter, lest the peace of our kingdom should happen to be troubled again'.

There is a certain irony here, however. The sheriff of Gloucestershire in 1215 was none other than Engelard de Cigogné (d. 1244), and he was named specifically in Magna Carta as one of the king's evil advisers, who the barons demanded be dismissed from office. The writ's stipulation that Engelard investigate his own malpractices must surely have been difficult to enforce! Engelard also held the post of sheriff of Herefordshire, which may explain how this writ came to be preserved at Hereford Cathedral. It's also interesting to note that the only bishop who joined the baronial rebellion in 1215 was Giles de Briouze, Bishop of Hereford (1200–1215): he was excommunicated by the papal commisioners in September of that year. 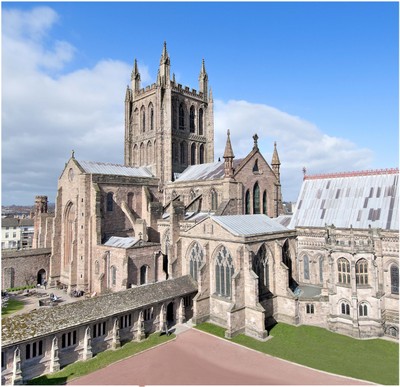 Hereford Cathedral, where the writ has been kept since the Middle Ages

You can read a translation of the Hereford writ below. It will be on display in Magna Carta: Law, Liberty, Legacy at the British Library from 13 March to 1 September 2015, and tickets are already on sale. Once again, we are indebted to Hereford Cathedral for its generosity in kindly agreeing to lend us this item, so that it can be shown with other items relating to the granting of Magna Carta in 1215. You can read more here about Hereford's participation in the celebration of the 800th anniversary of Magna Carta.

'John by the grace of God King of England, Lord of Ireland, Duke of Normandy and Aquitaine and Count of Anjou to the sheriff of Gloucestershire, foresters, wareners, custodians of rivers and all his other officials in the same county, Greeting.

Know that to restore by the grace of God firm peace between us and the barons and free men of our kingdom, just as you will be able to hear and see by our charter, which we accordingly caused to be made, which likewise we order to be read publically throughout the whole of your bailiwick and to be held firmly; willing and strictly enjoining that you, the sheriff, cause all men of your bailiwick or the majority of them according to the model of the aforementioned charter to swear obedience to the twenty-five barons of whom mention is made in the aforementioned charter to the same command, in their presence or the presence of those assigned to this by their letters patent, and at the day and place which for this purpose the aforementioned or assigned barons established from them for this.

We also wish and order that the twelve knights of your county, who shall be elected by the county in its first session that will be held after receipt of these letters in your parts, swear an inquiry into the corrupt customs of as much the sheriffs as of their agents, of forests, foresters, warrens, warreners, riverbanks and their wardens, and the destruction of the same, as is contained in the charter itself.

Therefore you all, as you love us and our honour, and the peace of our kingdom, inviolably observe and cause to be observed, by everyone, everything contained in the charter, lest for want of you or by your digression, the peace of our kingdom should happen to be troubled again, God forbid. And you, sheriff, cause our peace to be proclaimed through the whole of your bailiwick and order it to be firmly held.

And these our letters patent we send to you thence in testimony of this. Witness myself at Runnymede, the twentieth day of June, in the seventeenth year of our reign.'