There is a Middle English aphorism that says, ‘Winter all eats / That summer begets’. Living alongside 24-hour supermarkets, it is easy to forget the once vital preoccupation with preserving the autumn harvest and stocking our larders to the brim. As we approach the sign of Aquarius, long nights and short days will persist until mid-March when the sun enters Aries, and we spare a thought for our medieval forebears in the most barren and cold of seasons. Depictions of wintry concerns and activities from the medieval era are frequently featured in the calendars which preface many Books of Hours and Psalters (for a discussion of calendars, see the post from January 2011).

Detail from an October calendar showing the fattening of hogs, from the Breviary of Queen Isabella of Castile, Southern Netherlands (Bruges), c. 1497,  Add MS 18851, f. 6r 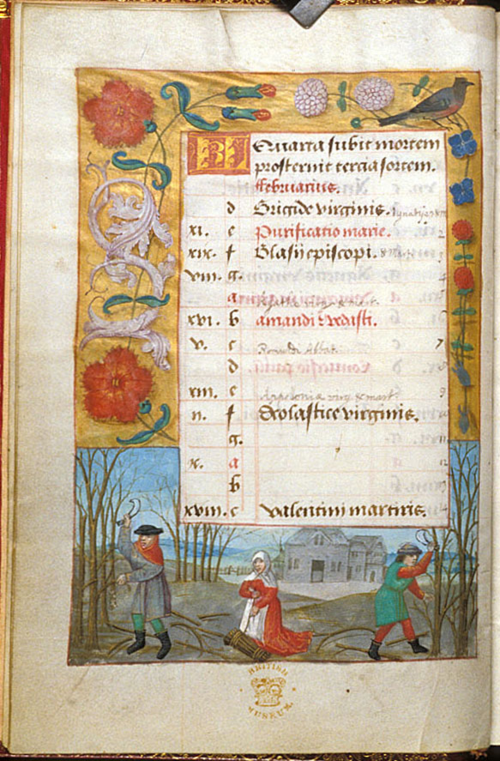 A February calendar with a bas-de-page scene of men chopping wood and a woman gathering it, from a Book of Hours, Southern Netherlands (Bruges), c. 1500, King’s MS 9, f. 3v

Surviving a medieval winter was the result of forethought and hard labour. The calendar page for October shows two men knocking acorns from trees to fatten their hogs in readiness for winter, while the calendar page for February depicts two men with curved knives cutting wood to be gathered and bundled, in this case, by a woman. 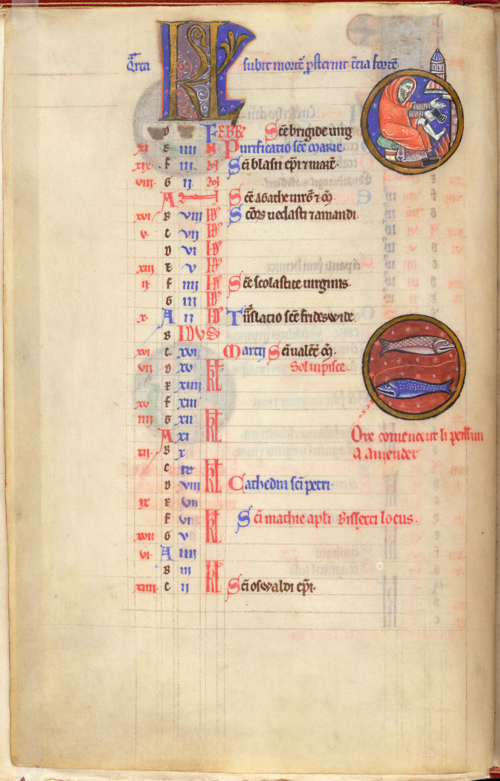 Little agrarian activity could take place in winter and miniatures of Labours of the Month for December, January and February show mostly indoor scenes. The practical discomforts of winter are illustrated in the February calendars of two contemporary Psalters, one made in Oxford and the other in Paris, both showing a man attempting to dry his shoe or warm his feet over the fire. 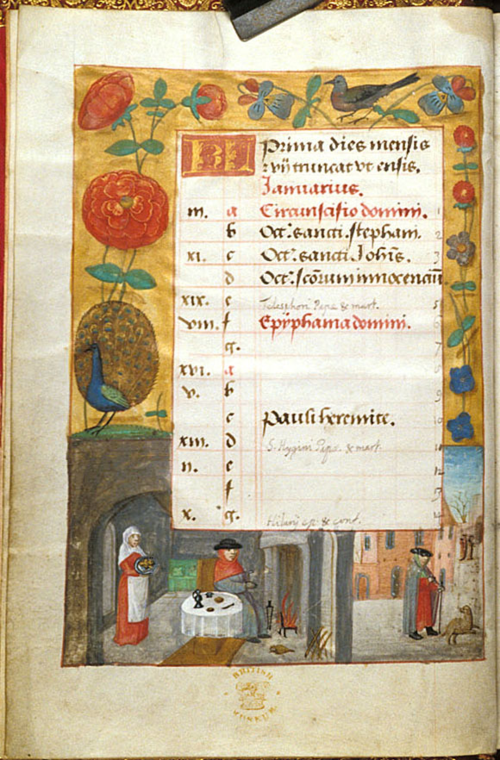 A January calendar with a bas-de-page scene of feasting by an open fire, from King’s MS 9, f. 2v

The standard activity featured in the January calendar is one of feasting and warming oneself by the fire. These miniatures were produced in Bruges around 1500, and both show men sitting to a rich feast attended by a woman. The dominant ‘humour’ of the winter season was thought to be phlegm, and one contemporary text, the Secretum Secretorum, recommended combatting its injurious effects through a modification of the diet. It prescribes figs, grapes, ‘fine red wine’ and ‘hot meats’ such as mutton or pigeon, while warning that the somewhat odd assortment of laxatives, bloodletting and lovemaking are to be avoided. Overindulgence in general is very bad, according to our source, but better to do so in the winter season when the body’s natural heat is drawn inwards, resulting in good digestion. This is good to know in the season which includes Christmas. 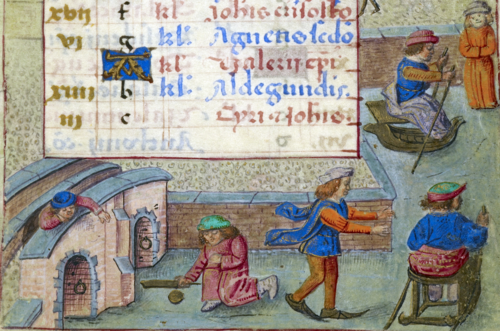 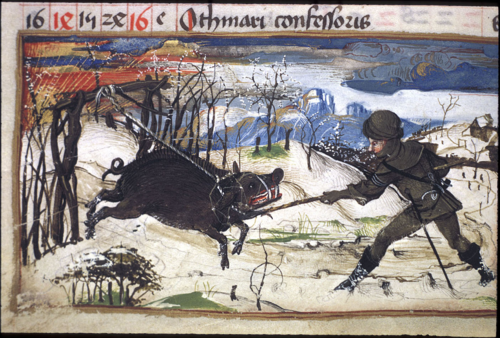 Snow sports of many varieties are another feature of January calendars, such as the skating, sledging and ball games taking place on the frozen river above. An activity which combined sport and the acquisition of food was boar-hunting, the principal quarry of noblemen in the winter. Above, a boar is chased through a gallows-like-structure in a snowy landscape, becoming ensnared in the noose and speared by a knight. Another good ‘hot meat’ to combat the phlegm.