Irish Manuscripts in the British Library

The British Library holds one of the great collections of Irish-language manuscripts in the world. While it is perhaps not as extensive a collection as those in Dublin or Oxford, and while most of the manuscripts are relatively recent in date, nonetheless the Library’s Irish manuscripts (over 200) contain much that is of considerable scholarly significance. In today’s post, we look at a few of the most important items in the collection. 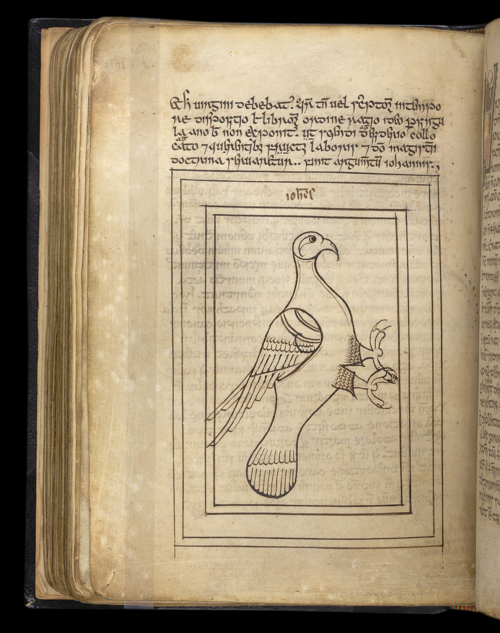 Harley MS 1023, f 64v. Below the end of the prologue to John is a drawing of his evangelist symbol, the eagle. A later medieval reader has added John's name above the eagle's head: 'Ioh(ann)es'. Ireland, N. (Armagh?), 1st quarter of the 12th century.

The two Harley Gospel Books are perhaps the jewels of the collection. Harley MS 1802 was completed in Armagh in 1138, and Harley MS 1023 has been attributed to the same place and roughly the same time of origin. Both manuscripts contain the Gospels in Latin, and fine miniatures of Evangelist symbols in ink, along with typical zoomorphic initials. Harley 1802 contains partial commentary in Latin and Irish, and Irish poems and scribal notes. Harley 1023 contains only a few Irish glosses. The Library has a particularly strong collection of Irish medical texts, including many translations of classical or medieval Latin texts. The highlight is undoubtedly Harley MS 546, a collection of medical tracts in Irish and Latin, dated to 1459, and now digitised in full. It includes such joys as the following advice on how ‘to make the face fair’ (Do gelad na haghthi), including some rather unusual uses for bull’s blood and what is translated by O’Grady as bovinum stercus. 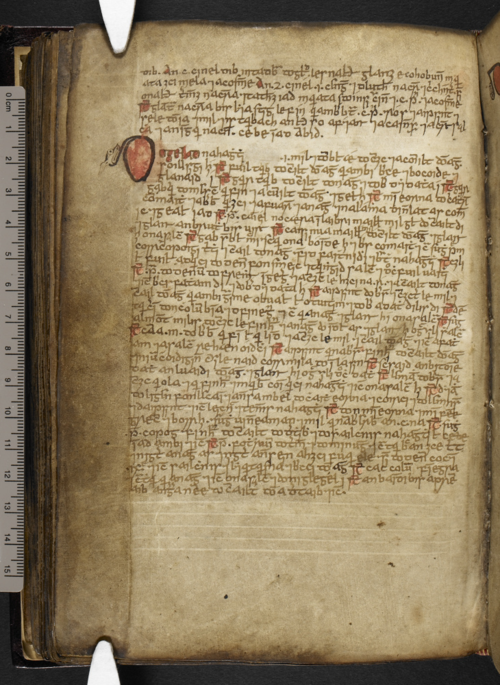 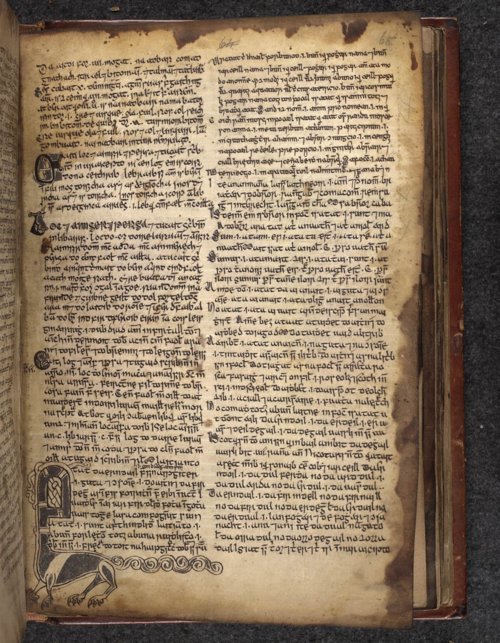 The Irish collections also include many important poetic and legal texts, but we finish with the famous Egerton MS 88, a legal and grammatical miscellany produced by the school of Domhnall Ó Duibhdábhoirenn in around 1564. This manuscript is not only important for its contribution to the study of Irish legal history, but also for the many scribal notes found throughout the manuscript, which give a vivid insight into the everyday lives (and sufferings!) of 16th-century scribes. Many of these complain about the poor working conditions in which Domhnall’s scribes have to work, and we can quote only one here: "Is fuar mairt cin dinér a Domnaill .i. ria nodlaig" (A dinnerless Tuesday is a cold thing, Donall, and before Christmas too). And it would be hard to argue with that! The later history of Egerton MS 88, including the unusual box it was housed in when it arrived at the British Museum, is another story altogether, and one that will have to wait for another day. (Parts of the manuscript are now also to be found in the Copenhagen, Kongelige Bibliotekat MS 261B, and Dublin, Royal Irish Academy, MS 23 Q 6.)

There are great riches to be found by dipping into the printed Catalogue of Irish Manuscripts, which contains transcriptions of many of the annotations and colophons, as well as some of the shorter poems, to be found in the Irish collections. There remains a great deal of work to be done on the collections, particularly on the 18th- and 19th-century manuscripts.

Further resources for the collections:

At present the online catalogue does not include most of the Irish manuscripts. Only a few have been digitised either in full or in part, and these can be viewed on the Catalogue of Illuminated Manuscripts or on Digitised Manuscripts. Updated bibliography by shelfmark can be found on the Bibliography of Irish Linguistics and Literature housed at the Dublin Institute of Advanced Studies.

The most important resource remains the Catalogue of Irish Manuscripts in the British Museum, the third volume of which contains a history of the collection and its formation. Some information on the collectors whose activities contributed to the formation of the collections now in the British Library (including Cotton, O’Curry, and Hardiman) can be found in Nessa Ní Shéaghdha, ‘Collectors of Irish manuscripts: motives and methods’, Celtica 17 (1985), pp. 1–28 (also published separately, Dublin: DIAS 1985, BL shelfmark 2702.b.93).

The composition of the Catalogue of Irish Manuscripts is a tale unto itself, as it is the work of three major figures in Celtic scholarship spanning three generations: Standish Hayes O’Grady (who compiled Volume I), Robin Flower (Volume II and III), and Miles Dillon (who revised Volume III after Flower’s death). The story can be found in the prefaces to the individual volumes of the Catalogue, while for a richer picture, a brief biography of Standish O’Grady can be found in Seán Ua Súilleabháin, ‘Standish Hayes O’Grady’, in Caithréim Thoirdhealbhaigh: Reassessments, ed. by Liam P. Ó Murchú, Irish Texts Society Subsidiary Series 24 (London: Irish Texts Society, 2012), pp. 77-98. (BL Shelfmark YK.2014.a.9606). An obituary of Robin Flower by H. I. Bell was published in Proceedings of the British Academy 32 (1946) pp. 353-79.