Nothing But The Trooth

Here at the British Library we’re famous for our April Fool blogposts. Who can forget the discovery of the unicorn cookbook, the time we encountered the Loch Ness monster, or the alien spaceship we found illustrated in a medieval calendar? But this year we’ve decided to keep to the straight and narrow. No jokes this year. Honest. 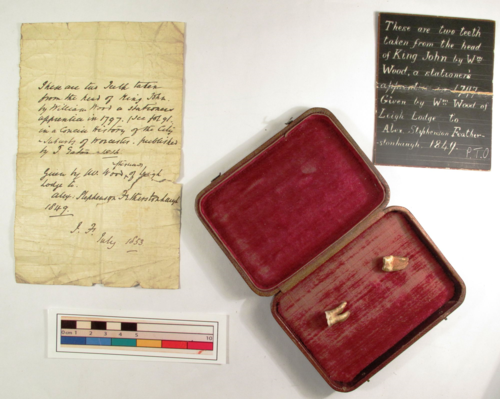 Instead, we’re going to bring you the teeth of King John. Yes, King John of Magna Carta fame, who notoriously snarled and gnashed his teeth when forced to concede the Great Charter in 1215 (at least, that’s what we’re led to believe) and who, to judge by the evidence, was in need of a very good dentist. At the Library we have two of John’s molars on display in our Magna Carta exhibition, and we’re not making that up. The gnashers in question were reportedly removed from the king’s tomb at Worcester Cathedral when it was opened in 1797, by one William Wood, a stationer’s apprentice. Next to the teeth we have on show a note recording their return, together with an account of the opening of the tomb. The molars have been kindly loaned to us for the duration of the exhibition by our friends at Worcester City Art Gallery and Museum.

So, in this week when another medieval English monarch was interred at Leicester Cathedral, what can we learn about Bad King John from his teeth? For starters, John must have been in an exceedingly foul mood when Magna Carta was presented to him, to judge by the state of his molars. X-rays were made of the two royal teeth that still survive outside the coffin, and we are indebted to Professor Jason Buschman of the University of Oklahoma, who wrote to tell us that one of the teeth is a lower molar, most likely "number 30 or 31 in palmer notation”. The dentist who made the x-ray reported that one of the teeth was exposed at the root, meaning that King John would have been in great pain: in his case, "abscess didn't really make the heart grow fonder". 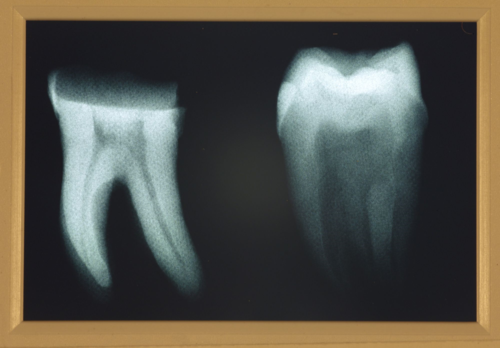 We can also speculate for the first time as to King John's diet. When his body was examined in 1797 by Mr Sandford, a surgeon from Worcester, it was reported that only four teeth survived in his "upper jaw". We are often led to believe that people in the Middle Ages had better teeth than their modern counterparts, due to the lack of sugar in their diet. Had John's gnashers started to fall out in his old age? One doctor we consulted suggested that King John may have imbibed too much runny mead during his lifetime (did it give him the runs?). What we can deduce, however, is that John may have suffered from chronic toothache in his final years, which potentially prompted his abysmal fits of temper, leading the barons to rebel against him. Did the king have more on his mind in June 1215 than simply putting his seal to Magna Carta?

After King John had died (in 1216), the monastic chronicler Matthew Paris wrote, "Foul though Hell is, it is made fouler still by the presence of John". Or, to put it another way, King John, "Fangs for the memories".

Of course, this may all be an April Fool after all ... if they were royal teeth, surely they would have a crown?