Being a royal librarian could be a lucrative business in the fifteenth century, as the career of Quentin Poulet illustrates. Born in Lille, he went from obscure scribe in a book-producer’s confraternity in Bruges in 1477-78, to keeper of the library of Henry VII in 1492. From the few records of his life that survive, we know that on 26th July 1497, he was paid £23 sterling for ‘a boke’ with a bonus of 10 marks on top from the royal purse. The ‘boke’ in question may well be Royal MS 19 C VIII, a copy of the Imaginacion de la vraie noblesse, which has just been photographed and uploaded to Digitised Manuscripts. 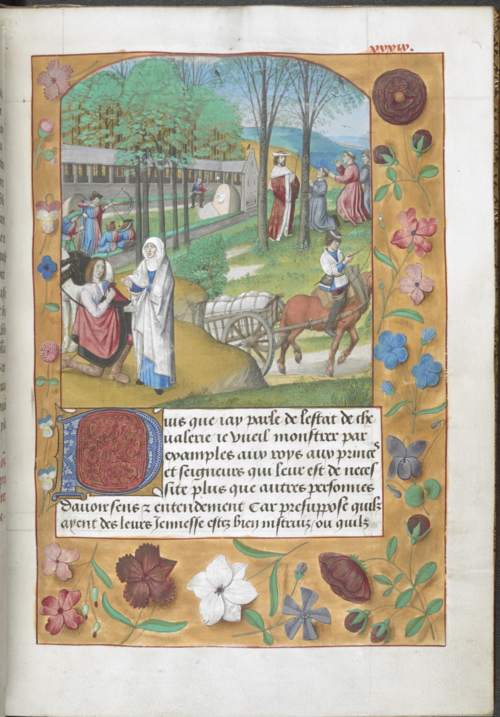 One might imagine why Henry was so chuffed with the present. The text is a knightly ‘mirror’ text, intended to offer moral guidance and instruction in courtly behaviour to its aristocratic reader – and what better reader than the ten-year-old Arthur Tudor, prince of Wales? For the heir apparent to Henry VII, this book could plausibly have formed part of his schooling. It offers edifying exempla: from the three aspects of nobility – love of God, love of justice, and love of good reputation – personified as three women, to the virtues embodied by the archer (his skill of focusing on a target) and the carter (his determination, or drive if you’re in the mood for a pun!). It warns how poor counsellors can lead a prince astray, while illustrating the divine right of kings in ruling over their realms.

Poulet copied the manuscript himself, writing the text in an elegant Bâtarde script – a style of handwriting common among manuscripts produced under the patronage of the Burgundian court (as illustrated by the copy of the Mystère de la Vengeance made c. 1465 for Philip the Good, acquired last year by the British Library and now Add MS 89066/1 and Add MS 89066/2). Miniature of Lady Imagination taking her leave of the young knight at the end of his pilgrimage, with the city of Halle in the background, Royal MS 19 C VIII, f. 90r

The text was not widely known in England: the only other known insular copy was made for Richard Neville, earl of Warwick, in 1464 (now Geneva, Bibliothèque publique et universitaire, MS fr. 166). Its obscurity may explain why Poulet was able to pass the work off as his own. The narrative frame of a pilgrimage from Lille to Halle (which town is illustrated in the background of many of the miniatures), and its attribution to a member of a prominent Flanders family, Hugues of Lannoy, also explain the text’s appeal to Poulet. 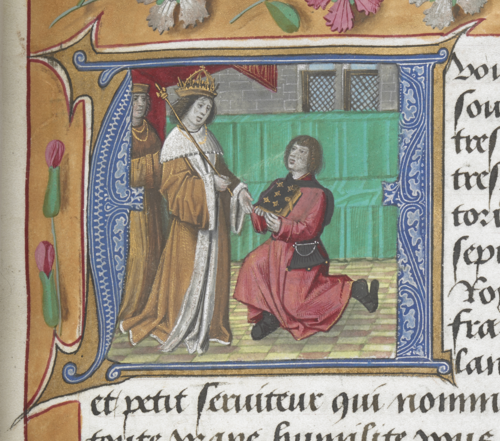 Detail of an historiated initial depicting the presentation of the manuscript by Quentin Poulet to Henry VII, Royal MS 19 C VIII, f. 1r

Poulet cannily repackaged the text, changing the title slightly from the Enseignement to the Imaginacion de la vraie noblesse, prefacing it with his own dedicatory introduction, and incorporating his name into the colophon at the end (which records the manuscript’s completion at the royal palace of Sheen on 30th June 1496). A historiated initial at the beginning of the preface depicts Poulet kneeling before Henry VII and offering him the book. 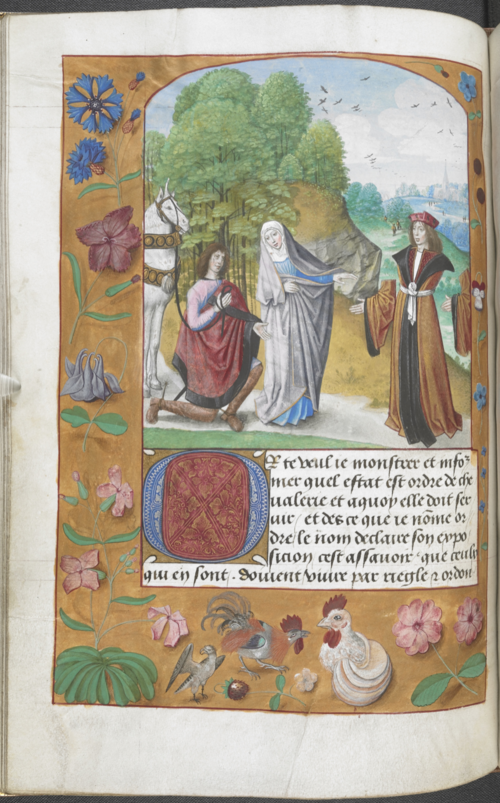 Miniature showing the young knight a man with severed arms, illustrative of his lack of honour, surrounded by a naturalistic scatter border and animal-rebus on the name of Quentin Poulet, Royal MS 19 C VIII, f. 32v – this image may be familiar to you from our Valentine’s Day post, An Illustrated Guide to Medieval Love

Poulet also had his name encoded into the decoration, in the form of a chicken (‘un poulet’, in French) emerging from a shell in one of the scatter borders that surround the miniatures. These borders contain naturalistic flowers and plants (pansies, roses, carnations and strawberry sprigs), animals, birds and insects (a bear, a jay, a grouse, an owl, a fly and a butterfly), and a cheeky monkey that is aping the gestures of the young knight (for more monkey business, take a look at our earlier post, Apes Pulling Shapes). 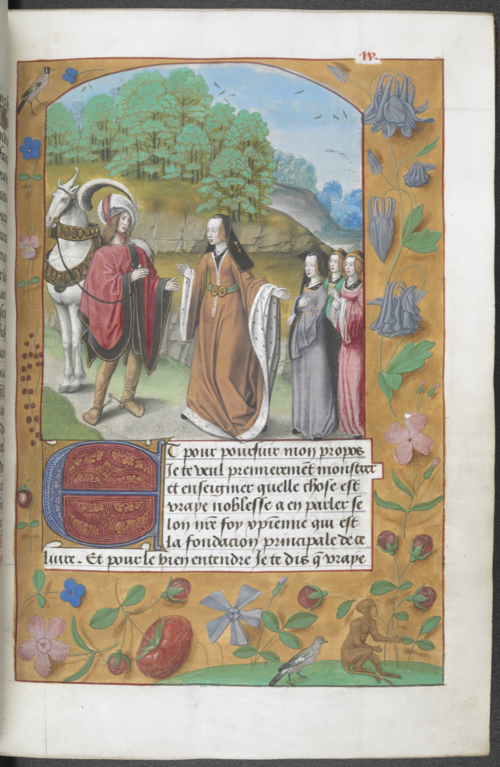 The manuscript contains six large illustrations, which were completed by the Bruges illuminator known to modern scholarship as the ‘Master of the Prayer Books of Around 1500’. (A note was added in pencil to f. 81v by Frederic Madden in 1845, drawing attention to the loss of the following leaf, which presumably contained a seventh miniature). His work is also found in Harley MS 4425, featured on this blog in our posts Sex and Death in the Roman de la Rose and The Height of Fashion, and Royal MS 16 F II, a compilation including poetry by Charles of Orléans.  The British Library also holds one other copy of the Enseignement – Add MS 15469 – another illustrated but much less lavish production on paper.