An 'Additional' Round Table Celebration

The illuminated manuscripts staff held a small celebration on Thursday – our unique set of three volumes of the entire Lancelot-Grail, Additional MSS 10292, 10293 and 10294 have been digitised – that’s a total of 695 folios with 742 images! We had a special cake made to mark the occasion, and here it is, with one of the gorgeous images from Additional MS 10293 (f. 199r)  of Lancelot and Guinevere reproduced in icing! 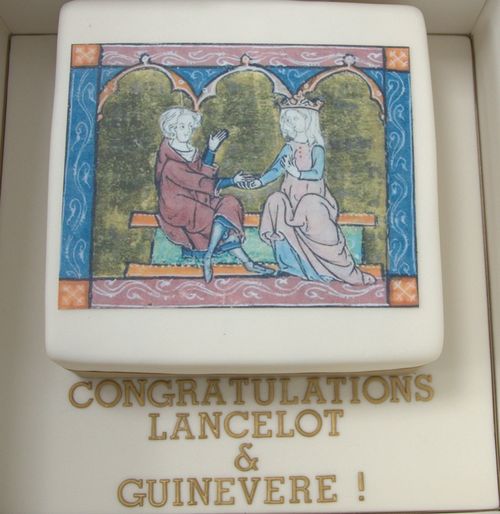 Digitisation of these manuscripts has been a long and torturous process, begun in 2013: the volumes are very large and not easy to photograph and in 1860, when they were rebound, the decision was made to separate the first folios of two of the volumes, Additional MSS 10293 and 10294, into a separate volume, now Additional MS 10294/1. Both folios have gorgeous miniatures and full borders, and they were bound separately ‘for better preservation’ (according to a note on one of the flyleaves) as, being opening folios, they have been well-used so the illumination is worn and the parchment is deteriorating at the edges.  But this has made the process of cataloguing and digitisation more complex, as the separate volume needs to be correctly labelled, recorded and entered in the cataloguing system so that users in our Reading Room and online, are able to access it easily.

But it has all been worth it – these manuscripts are a treasure-trove of incredible images of knights, kings, battles, devils, hermits, sea voyages, dragons and everything in between. Here are some of our favourites, including the opening page of the Histoire de Merlin from the first volume. The image shows God opening the gates of hell with the devils meeting inside; one of the devils later fathers Merlin (see the following image on f. 77v).  We are not too sure what is happening in the lower margin of f. 76r – perhaps our readers have some suggestions! 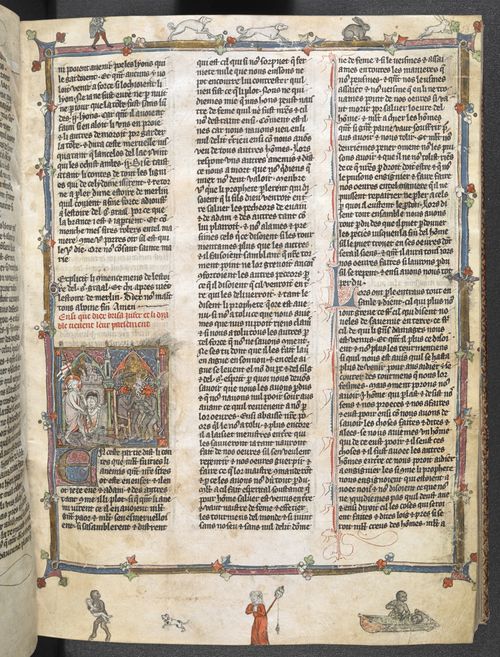 Below is the first folio of Additional MS 10293, the part known as the Lancelot-propre, or Lancelot du Lac, that tells the story of Lancelot, his chivalric exploits and his love for Guinevere.  The image shows the aged King Ban, Lancelot’s father with his brother, King Bohors of Gaunes, before he was killed and dispossessed by the treacherous knight, Claudas. The text begins ‘En la marche de Gaule et de la petite bertaigne avoit ii rois’ (in the border of Gaul and little Brittany there once lived two kings….). The border is decorated with hybrid creatures, animals and human figures, one side consisting of a 3-storey chapel, each storey containing a courtly character. There are marvellous details to zoom in on, including a nun feeding a beggar on the lower right and a fire-breathing devil above the main image. 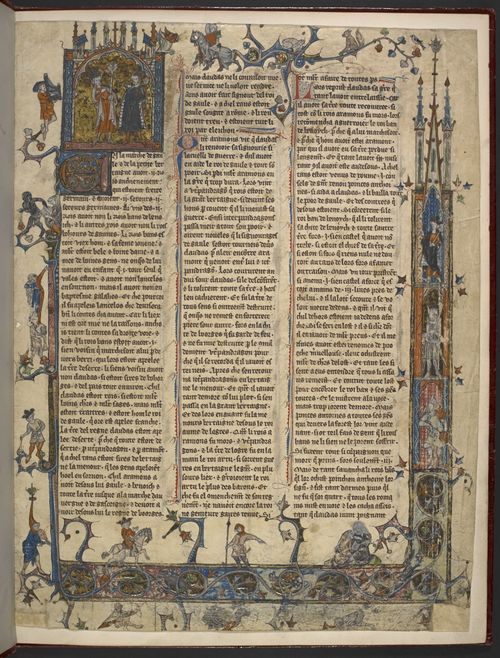 In this poignant image from the end of the Mort d’Artu, the hand emerges from the lake to take back Excalibur, King Arthur’s sword, and Arthur is shown, lying wounded in the foreground, while the young squire, Giflet or Griflet, looks on. 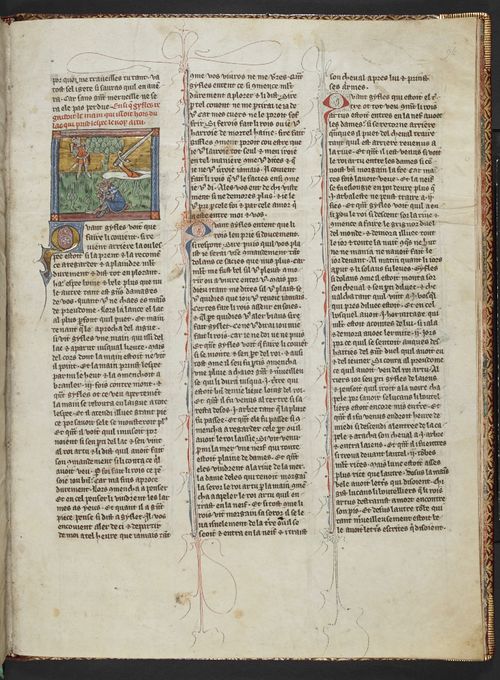 Ending on a happier note, with another party, the opening folio of Queste del Saint Graal  from the third volume, shows King Arthur’s court seated at the table at Camelot on the eve of Pentecost, against a sumptuous gold backdrop. The border once again, is a plethora of knights, hybrid creatures and scenes from medieval life, including a man carrying a child in an early version of a baby backpack, but some scenes are best not described in this blog! 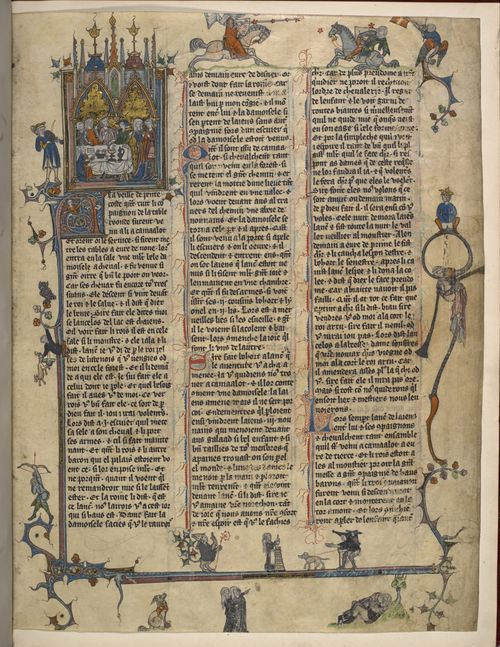 If I might add my two cents concerning the marginalia on fol. 76r, it seems to be a depiction of a devil swapping a human child with a changeling. The creature in the crib looks more similar to the demons than to the human child being abducted. Such an interpretation could be supported by the thematic continuation of supernatural influences in infants. The demonic presence in Merlin's conception is also an instance in which the supernatural is introduced to the human realm just as the substitute of changeling for child exchanges human for inhuman. Merlin and, presumably, the changeling would then grow to be channels of the extraordinary or 'other' in the mundane world. The illustrator of this book full of fantastical stories, may then be nudging the reader in the marginalia to recognize this theme in the Merlin story...Just a thought.

On a side note, I really love this blog. Thank you so very much for providing these manuscript gobbets from the British Library!