Pictures At An Exhibition

If you've been down to our Magna Carta exhibition, you may have realised that it's not just a show about books and documents. Among the exhibits are no fewer than 20 prints and drawings and 8 paintings, all of which help to set Magna Carta in its historical context. Mounting an exhibition of this magnitude has been no mean feat, and we're hugely indebted to the various institutions who have kindly loaned some of their key items to the British Library, namely the British Museum; the Victoria and Albert Museum; the National Portrait Gallery; HM The Queen and the Royal Collection, Windsor; the Palace of Westminster; the Bodleian Library, Oxford; and the Musée Carnavalet, Paris. 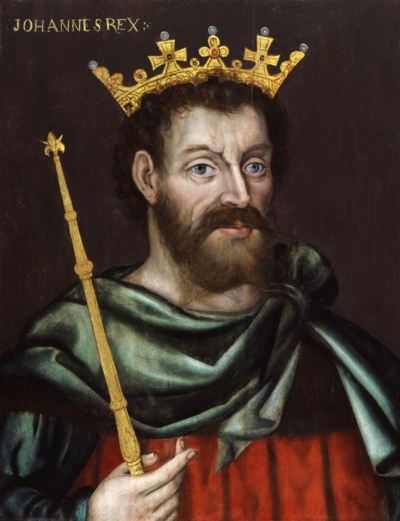 Portrait of King John by an unknown artist (c. 1620) (on loan to Magna Carta: Law, Liberty, Legacy from The National Portrait Gallery, London)

Every picture tells a story. Below are ten of the more intriguing ones, all of them featured in our Magna Carta exhibition. 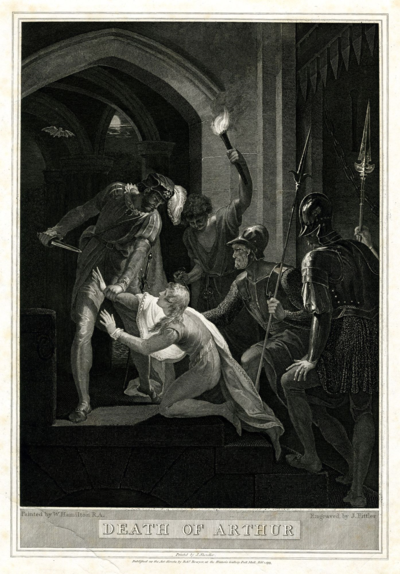 The Death of Arthur from Bowyer’s History of England (1793) (on loan to Magna Carta: Law, Liberty, Legacy from a private lender, reproduced here by courtesy of The British Museum, London)

This sinister engraving of the murder of Prince Arthur was one of the illustrations commissioned by Robert Bowyer (d. 1834) for a new edition of David Hume’s The History of England. The original painting by William Hamilton (d. 1801) was exhibited in London in 1793, shortly after the guillotining of King Louis XVI of France (1754-93), and it shows King John's nephew, Prince Arthur, begging for his life. The murderer is unidentified, but the catalogue accompanying the 1793 exhibition names him as King John. If you look closely you can see a bat (the harbinger of doom) hovering above the murderer’s dagger. 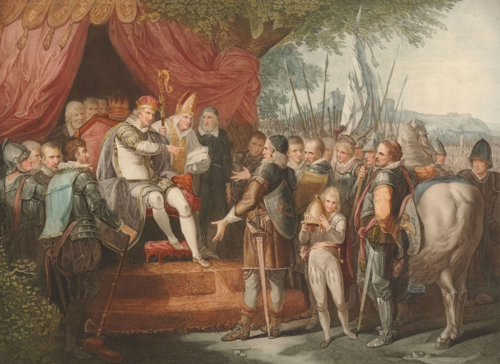 There is a sad story behind this coloured print. It reproduces a painting by John Hamilton Mortimer (d. 1779), exhibited at the Society of Artists in 1776, imagining the scene of the granting of Magna Carta at Runnymede. The engraving from which the print was produced was begun by William Wynne Ryland in 1783. Later that year, however, Ryland was convicted of handling forged bills, and he was hanged at Tyburn in London. His widow, Mary, raised a subscription for this print to be published in her husband’s memory. 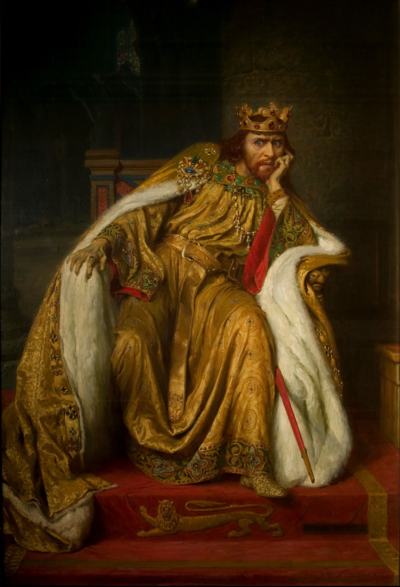 Painting of Herbert Beerbohm Tree as King John, by Charles Buchel (1900) (on loan to Magna Carta: Law, Liberty, Legacy from The Victoria and Albert Museum, London)

We particularly like this brooding portrait of the Shakespearian actor Herbert Beerbohm Tree (d. 1917), loaned to our exhibition by the V&A. Tree performed King John to some 170,000 spectators at Her Majesty’s Theatre in London between 20 September 1899 and 6 January 1900, and his performance was captured in the earliest record of Shakespeare on film (also in Magna Carta: Law, Liberty, Legacy). The artist, Charles Buchel (d. 1950), revealed that Tree was a ‘a bad sitter … because he was impatient and seemed to want to do the work himself!’ Part-way through the sitting, Tree jumped up and proposed acting the part of King John as he was being painted, and even enlisting the help of other members of the cast to put on the play -- an offer which the artist declined! 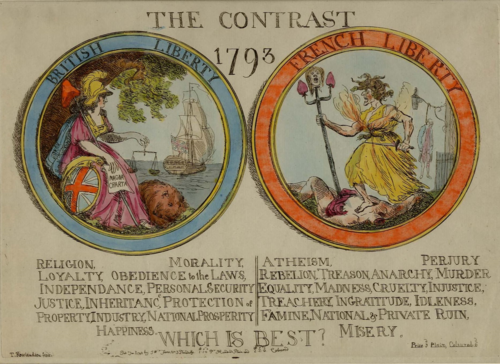 The Contrast, 1793: British Liberty, French Liberty, Which is best? (on loan to Magna Carta: Law, Liberty, Legacy from The British Museum, London)

This colourful print by Thomas Rowlandson (d. 1827) was made in London at the time of the French Revolution, and contrasts the virtues of ‘British Liberty’ with the dangers of Jacobin ‘French Liberty’. The roundel on the left depicts Britannia holding ‘Magna Charta’ and the scales of Justice, with the noble lion of England reposing peacefully at her feet. On the right, a gruesome French Medusa, carrying a trident impaled with hearts and a severed head, tramples a decapitated corpse underfoot, with a man hanging from a lamp-post in the background. The legend equates British liberty with ‘justice’, ‘prosperity’ and ‘happiness’, while French liberty led to ‘misery’, ‘injustice’, ‘ruin’ and (hmmm) 'equality. 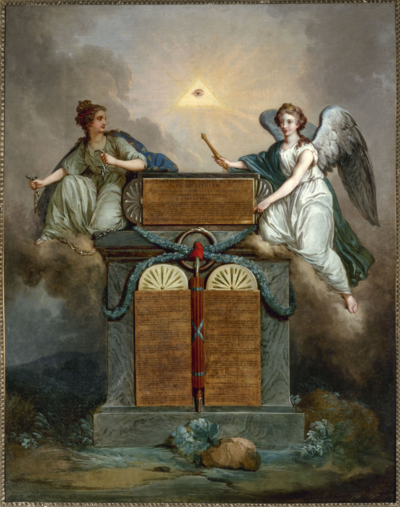 Our favourite item in the exhibition changes day by day. But this painting is always one of the leading candidates. On 26 August 1789, the French National Constituent Assembly issued the Déclaration des droits de l'homme et du citoyen (Declaration of the Rights of Man and the Citizen) which defined individual and collective rights at the time of the French Revolution. The Déclaration echoed Magna Carta in certain key statements, such as by subordinating the monarch to the rule of law, by maintaining that, ‘Nul homme ne peut etre accusé, arreté ni detenu que dans les cas déterminés par la loi’ (No person shall be accused, arrested or imprisoned except in those cases established by the law), and by ensuring that taxation could only be raised by common consent. This allegorical painting by Jean-Jacques-François Le Barbier (d. 1826) is remarkable for its incorporation of a printed text of the Déclaration, pasted onto the canvas. 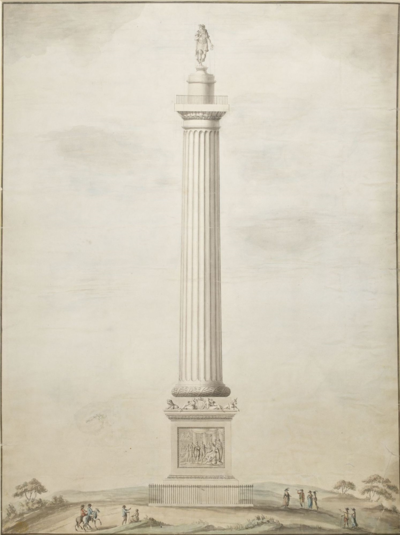 Design for a column with a statue of William III intended to be erected at Runnymede (1788?) (on loan to Magna Carta: Law, Liberty, Legacy from The British Museum, London)

This has to be one of the strangest stories relating to Runnymede. In 1788 the followers of the statesman, Charles James Fox (d. 1806), proposed that a column dedicated to the Glorious Revolution (1689) should be constructed at Runnymede. The scheme never came to fruition, not least because the column in question would doubtless have sunk into the floodplain of the River Thames. This plan by William Thomas is its only material legacy. But Fox's opponents used the opportunity to lambast him for the proposal, as in this print produced by William Dent. Here a fox is shown hanging from a gibbet, excreting ‘Runny Mead’ from its backside. Justice, Britannia and Liberty rejoice underneath the gibbet, chanting, ‘Let’s joyful Dance and merry Sing … Huzza! … for Ch[ar]l[e]y is quite the thing’. 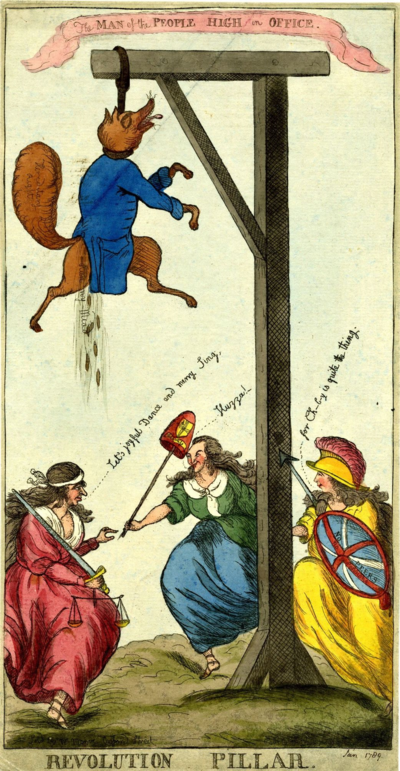 Etching of a fox hanging from a gibbet and excreting ‘Runny Mead’, by William Dent (London, 1789) (on loan to Magna Carta: Law, Liberty, Legacy from The British Museum, London) 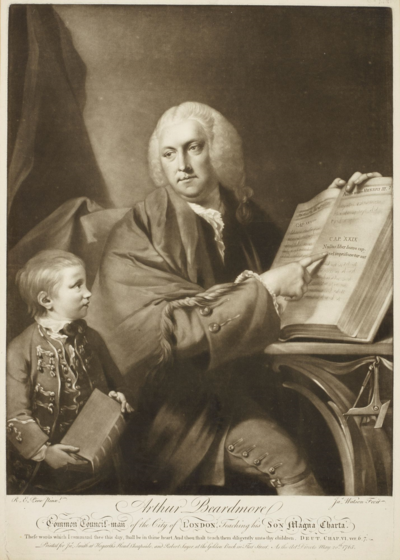 Print of Arthur Beardmore teaching Magna Carta to his son (1765) (on loan to Magna Carta: Law, Liberty, Legacy from HM The Queen and the Royal Collection, Windsor)

This print, on loan to our exhibition from the Royal Collection, refers to one of the more curious uses of Magna Carta in the 18th century. In 1762 the lawyer and journalist, Arthur Beardmore (d. 1771), was arrested for publishing a seditious libel against Princess Augusta of Saxe-Gotha (d. 1772), the mother of King George III (1760–1820). Beardmore sued the government for unlawful arrest, winning the case in 1765, and to commemorate the ruling this print was produced, portraying Beardmore at the moment of his arrest, ‘teaching his Son Magna Charta’.

Now look at this anonymous etching below. It shows Dick Swift teaching his son the Ten Commandments, and is a clear parody of the Beardmore print. Dick Swift was a convicted criminal, transported for handling stolen goods and re-arrested in 1765 after he returned to England. Striking a pose identical to Beardmore, Swift shows his son the 8th Commandment, torn so as to read ‘Thou Shalt Steal’. A noose hangs ominously over the head of the son, who, abiding by this instruction, picks his father’s pocket. And in case the parallel isn't clear, the print of Beardmore is nailed to the back wall! 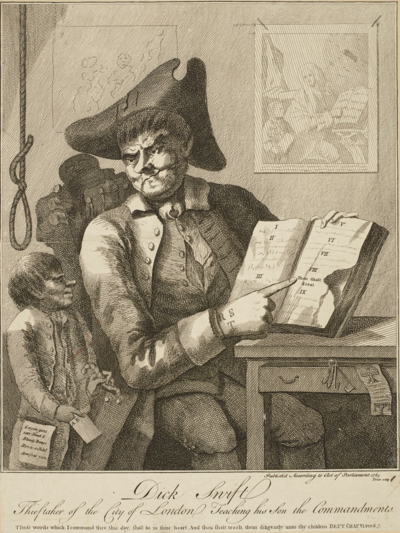 Print of Dick Swift Thieftaker of the City of London Teaching his Son the Commandments (1765) (on loan to Magna Carta: Law, Liberty, Legacy from HM The Queen and the Royal Collection, Windsor) 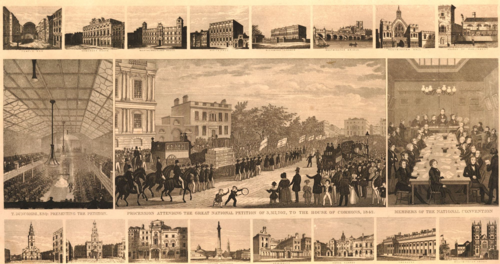 Procession Attending the Great National Petition to the House of Commons (1842) (on loan to Magna Carta: Law, Liberty, Legacy from The British Museum, London)

This print, on loan to the British Library's Magna Carta exhibition from the British Museum, shows the presentation of the largest Chartist petition to Parliament in 1842. Written on paper some 6 miles (10 km) long, the Great National Petition weighed over 48 stone (more than 300 kg). As the print states, the petition contained the signatures of 3,317,702 people, one-third of the adult population of Great Britain. The central view of the print shows the great Chartist procession that accompanied the petition along Whitehall to Parliament, and to the left is a depiction of the radical Member of Parliament, Thomas Slingsby Duncombe (d. 1861), presenting the petition in the House of Commons. The Chartists consciously echoed Magna Carta in the choice of their name, since they agitated for the extension of voting rights and other Parliamentary reforms.

Magna Carta: Law, Liberty, Legacy is on display at the British Library until 1 September 2015. The items featured in this post can also be viewed on our dedicated Magna Carta website.