In their new picture book published by the British Library, Medieval Monsters, medieval historian Damien Kempf and art historian Maria L. Gilbert explore the fantastic, grotesque and exuberant world of monsters in the Middle Ages through the images found in illuminated manuscripts, from dragons and demons to Yoda and hybrid creatures. The book has already attracted rave reviews: don't forget that you can buy it from the British Library online shop (£10, ISBN 9780712357906).

In this guest post, Damien and Maria describe ten things you should know about medieval monsters in a whimsical poem à la Edward Lear and Dr. Seuss.

With medieval manuscripts one does find

there lurks a particularly special kind

of creature, lurking in the margin,

monsters are Sin and Damnation,

We enter their world, they hold us in thrall 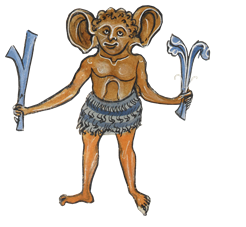 The big-eared Panotii were a monstrous race;

located on the peripheries—an imaginary place.

Their ears were so large they could serve as blankets

or wings to fly away when overcome with shyness.

2. They may create a wonderful first impression but beware! 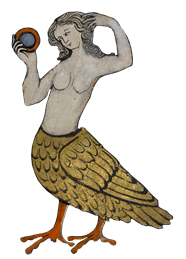 sings so enchantingly there’s no time to plea.

You’re entranced, you’re drawn in. That voice! Those tail swishes!

Next you’re asleep and then: food for the fishes.

3. They may crave love and tenderness 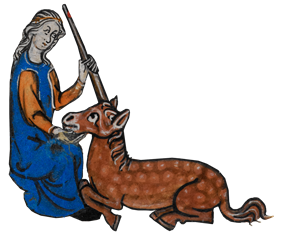 A horse with a long horn, most fierce and shrewd,

the all powerful unicorn easily eludes

an experienced hunter, but tame it becomes

at the touch of a virgin and completely succumbs.

4. They may be multi-headed 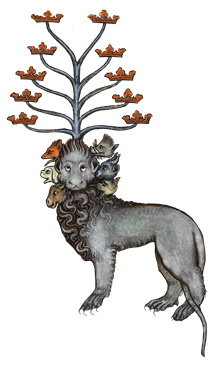 with multiple crowns, his head is adorned.

the Beast of the Apocalypse gives quite a scare.

5. They may be very tempting Living in the desert, the hermit saint Anthony

Facing trial after trial of temptation,

this Christian ascetic retained his concentration.

6. They may bite off more than they can chew 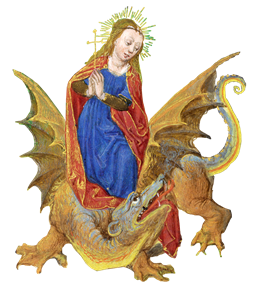 Margaret of Antioch, thrown into prison

by the prefect Olibrius for being a Christian.

The devil as a dragon visited her there,

swallowed her whole but having said a prayer

she burst out unharmed, a dragon slayer.

7. They may take your soul on your deathbed if you behave badly 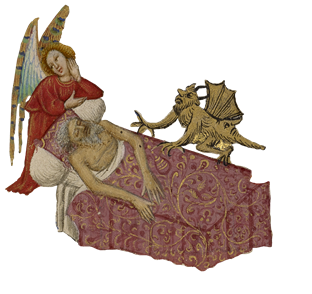 At death, both an angel and devil are waiting.

Will your soul go to hell or is it worth saving?

It depends on the deeds you performed in life.

whether you repented or caused bitter strife.

8. They may be quite irksome 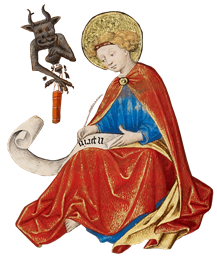 On Patmos, John (the Evangelist probably)

A mischievous demon tried to spoil the plot

9. They may be flashy 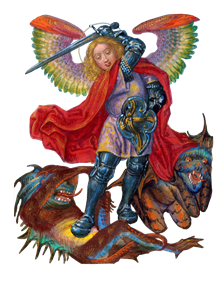 smote the devil down but didn’t strike him dead.

A spectacular battle, some would say,

as theatrical & vibrant as lucha libre. 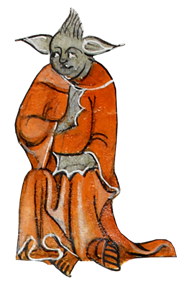 Nothing, it seems, is ever new in principle.

This is a charmingoece, but you may want to alter 'alludes' to 'eludes' in verse 3

Georges Lucas is a copy cat ! Not only for Yoda !