The collection known as the Paston Letters is one of the largest archives of 15th-century English private correspondence, comprising about 1000 letters and documents including petitions, leases, wills and even shopping lists. They offer a unique glimpse into the personal lives of three generations of the Paston family from Norfolk over a period of 70 years -- the family name comes from a Norfolk village about 20 miles north of Norwich. The Pastons rose from peasantry to aristocracy in just a few generations: the first member of the family about whom anything is known was Clement Paston (d. 1419), a peasant, who gave an excellent education to his son William (d. 1444), enabling him to study law. William’s sons and grandsons, two of whom were knighted, continued his relentless quest for wealth, status and land, and their story was acted out against the backdrop of the Wars of the Roses. 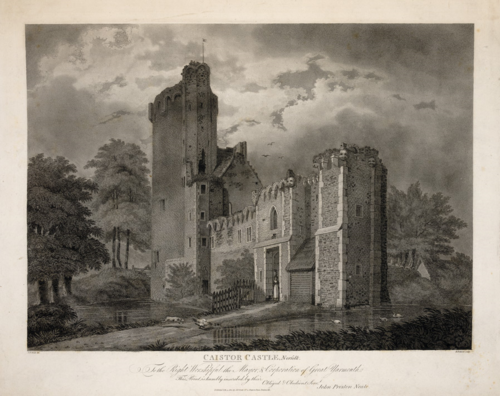 A 19th-century view of the ruins of Caistor Castle in Norfolk. This 15th-century 'castle' was built for a prominent aristocratic family, the Fastolfs. It passed to the Paston family who occupied it for the next century (British Library KTop XXXI.47)

For the first time, part of the British Library’s large collection of Paston family correspondence and documents has been digitised and is available to view in full. Five volumes containing some of the most studied items have now been published on our Digitised Manuscripts website: four volumes from 1440-1489 (Add MS 43488, Add MS 43489, Add MS 43490, Add MS 43491) and a volume that contains further material from the second half of the 15th century, together with later correspondence from of the later 16th century (Add MS 33597). One of the most famous items in the Paston collection is the oldest Valentine letter (London, British Library, Additional MS 43490, f. 24), featured on this blog in 2011 when it was displayed in the British Library's Evolving English exhibition.

One of the earliest of the surviving letters, dated 20 April, ?1440, is from Agnes Paston to her husband, William, the patriarch of the family, in which she tells him that their son, John, seems to like the ‘gentilwomman’ that his father has chosen to be his bride, and asks him to buy her a wedding gown in ‘a godely blew or ellys a bryghte sanggueyn [red]’. Her mother has promised to supply the fur to go with it. She ends the letter, ‘Wretyn at Paston in hast … for defaute of a good secretarye’, so it would appear that this letter was written by Agnes herself. Unfortunately we do not know if the bride, Margaret Mautby, liked her gown, but she did marry John later in 1440! 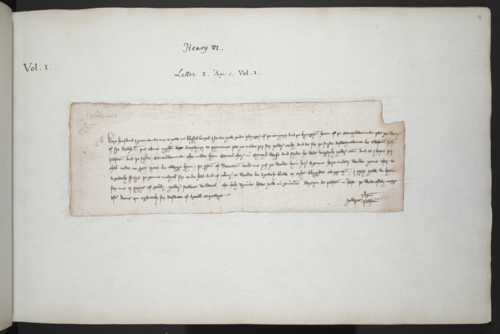 The titles in modern handwriting show that this is the first letter in volume I of five volumes of Original letters, written during the Reigns of Henry VI, Edward IV and Richard III…, edited and bound by their owner, John Fenn, the Norfolk antiquary in 1787-89 . The first two volumes were presented by him to King George III (1760-1820) at St James’s Palace in 1787, but then disappeared from view until they were found  in the library of Colonel George Tomline at Orwell Park, Suffolk, around 1890. Tomline was a descendant of the private secretary to William Pitt the Younger, so they may have been in Pitt’s library in the late 18th century, but there is no record of how he obtained them from the Royal library. They were bought by the British Museum in 1933 after the Pretyman-Tomline family put them up for sale at Sotheby’s.

Each letter has the address and remains of a wax seal on the rear.

Official family business is the major topic of the correspondence. Margaret Paston, nee Mautby, wife of John Paston I (d. 1466), a London solicitor, was left to manage the estates in Norfolk while he pursued land claims against the estate of Sir John Fastolf, a career soldier (d. 1459) and one of the major correspondents of the family. Topics of a more personal nature include family fall-outs, parental nagging, clashes with the aristocracy and parties thrown while parents were away from home. In December 1441 Margaret writes to John to ask him for a new girdle as she has grown ‘so fetys’ (fat): she is 6 months pregnant with their first child, who is born in April 1442.  The letters provide a colourful portrait of medieval provincial society: feckless sons and aging daughters are married advantageously and a manor house is besieged in a land-dispute. Dinner parties are planned and the topics discussed range from local gossip, the problems of cash-flow and the wool trade to the shortage of good servants.

Among the letters and documents is an inventory of ‘Englysshe bokis’ owned by John Paston II (b. 1442, d.1479); unfortunately, the paper has decayed on the right-hand side so the titles are incomplete. Paston’s library included copies of romances that were popular at the time, for example ‘a boke of Troylus’, ‘þe Dethe off Arthur’ and a printed book listed as ‘a boke in preente off þe Pleye of þe… ‘, which has been identified as a copy of Caxton’s printed edition of ‘The Game and Playe of the Chess’, published in 1475. Unsurprisingly there are several books of heraldry, religious and classical texts.

Sometimes the events described in the letters are remarkably familiar. While studying at Trinity Hall, Cambridge, probably in his late teens, John Paston I loses his wallet somewhere between Cambridge and Newmarket! Here is an edition of the letter written by a certain John Gyne, known to the family, who found it on the ‘high weye’. The letter is from a collection that is soon to be digitised, and is transcribed in James Gairdner’s 1904 edition of the letters.

To the worthy and worshipful sir and my good maister, John Paston of Trynyte hall in Cambrigge

Right worthy and worshipfull sir, and my good maister, I comaund me to yow. Like it yow to witte that on the Soneday next after the Ascencion of oure Lord, in the high weye betwex Cambrigge and the Bekyntre toward Newmarket, I fonde a purs with money ther inne. Th’entent of this my symple lettre is this, that it please to your good Maistership by weye of charite, and of your gentilnesse, to witte if ony of youre knowleche or ony other, swich as yow semeth best in your discrecion, have lost swich a purs, and, the toknes ther of told, he shal have it ageyn, what that ever he be, by the grace of oure Lord, Who ever have yow in his blissed kepyng. Wretyn at Sneylewell the Moneday next after the seid Soneday. By youre pover servaunt, John Gyn.

As most of the letters are dated or datable, they are invaluable primary sources for historians and are, in addition, of outstanding interest to linguists as evidence of the English language at a crucial period in its development.  There are 2185 entries from the Paston letters in the Oxford English Dictionary and in Visser’s monumental work,  An Historical Syntax of the English Language (Leiden: Brill, 1972), they are a major source of examples of Middle English usage. One example is found in a letter from John Paston III (John Paston I has two sons called John Paston, just to confuse historians!) to his mother, Margaret Paston, where he informs her that my lord of Oxynforth … sent to my lady of Norffolk by John Bernard only for my mater and for non othyr cawse, myn onwetyng … (‘Lord Oxford sent a message to Lady Norfolk just to raise my business with her and for no other reason, without me knowing’). This construction, myn onweting (literally ‘mine unknowing’), is unfamiliar to us now. In modern English we would use the preposition ‘without’ to introduce an adverbial phrase with a present participle but we would be more likely to replace it with a noun, e.g., ‘without my knowledge’. The vocabulary, too, is interesting. ‘Onweting’ is a form of the Old English verb, ‘witen’, an alternative to ‘cnawan’ (to know), which survives in noun form in Modern English, in the word, ‘wit’ or ‘witless’ but is no longer used as a verb.

This letter was written in the midst of the confusion surrounding the restoration of Henry VI, who was recrowned the day after it was written, on 13 October 1470. John Paston tells his mother ‘tydyngys’ of the imminent death of the Earl of Worcester, who was to be executed a week later. 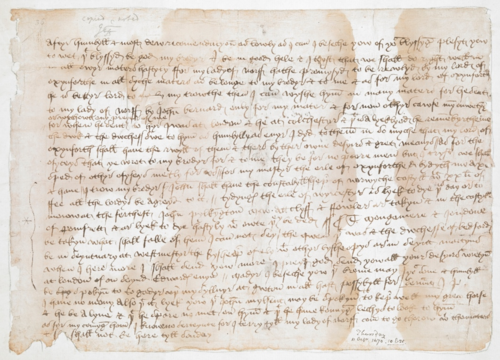 These 5 volumes are just a part of the large collection of Paston letters in the British Library. Further volumes of the family’s letters and documents are scheduled for digitisation in the future, so watch this space!