The Trial of Queen Caroline

Today we continue our series of blogposts featuring items in our major current exhibition, Magna Carta: Law, Liberty, Legacy. Don't forget that the exhibition is open in London until 1 September 2015, and that you can read about the exhibits in the accompanying catalogue and on our dedicated Magna Carta website ... 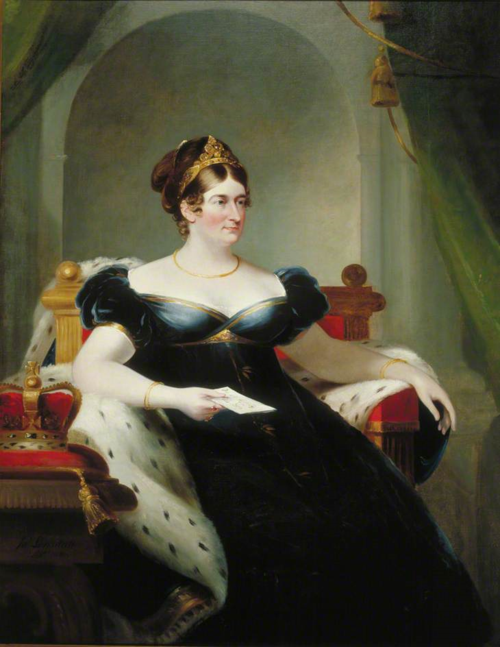 On 8 April 1795, in the Chapel Royal, St James’s, George, Prince of Wales, the future King George IV (reigned 1820–30), married his cousin, the German Princess Caroline of Brunswick-Wolfenbüttel. It was not to be a happy union. When the marriage broke down very publicly in 1820 it scandalised the nation. During what became known as the ‘Trial of Queen Caroline’, supporters of the jilted Queen used Magna Carta to challenge what they regarded as a hypocritical and corrupt political establishment.

From the outset the marriage was never going to be a success. Prince George was already married to Maria Fitzherbert — though as she was a Catholic it did not legally count — and he was also having an affair with Frances Villiers, Lady Jersey. Indeed, George only consented to marrying Caroline because his father, King George III, agreed to pay off all of the Prince’s considerable debts if he did. Yet George remained so uninterested in matrimony that, when he was asked who he might like to marry, he reportedly claimed it did not matter as ‘one damned German frau is as good as another’. He should have paid more attention. Princess Caroline — who was chosen for him by his father — was reportedly a woman of high spirits, loose conduct, indecent language and poor hygiene. When Prince George first met her he was so dismayed that he turned aside and asked for brandy, and on the morning of their wedding he was so inebriated that he had to be physically supported throughout the ceremony. Unsurprisingly, within a year the royal couple were living separately, althought Caroline had achieved some success as a high society figure. She resided in Blackheath, London, and regularly made extravagant tours around the Mediterranean where she travelled with a large entourage, her favourite being her valet Bartolomeo Bergami — a well built, tall, handsome Italian. 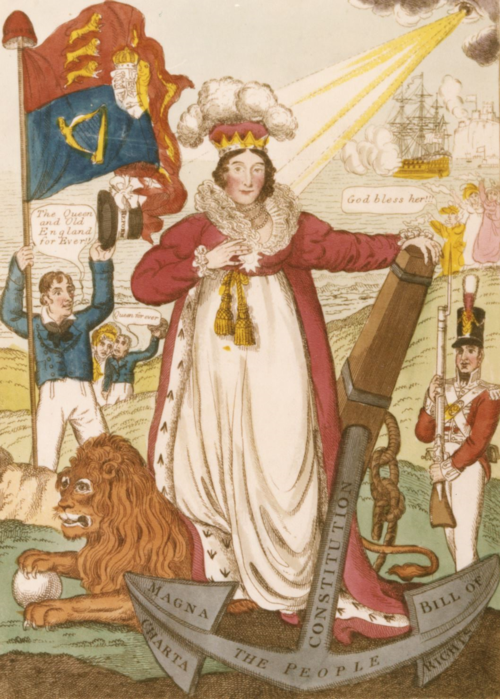 As soon as George IV became king in 1820, Caroline immediately returned to England to claim her place as Queen of England. Outraged, and seeking a divorce, George pressured Parliament to prepare a bill to strip Caroline of her title and end the marriage by Act of Parliament. A divorce through the ecclesiastical courts was difficult for the King given his own embarrassingly scandalous love life, and the bill in Parliament was considered the most expedient mode of attaining a divorce. The passage of the bill through Parliament became a spectacular cause celebre. The queen attended Westminster on a daily basis to hear the MPs debate her conduct (particularly with the Italian Bergami) in a process that emerged as something akin to a trial. The ‘trial’ of Queen Caroline became, as the government feared, a cause which radical parliamentary reformers exploited, as yet one more example of a corrupt political establishment supporting its own interests and in need of change. Caroline became the focus of many demonstrations and the topic for public prints in which she was represented as a wronged woman and an icon of the oppressed. Her lost rights became associated with the people’s lost rights, and she was often depicted as a heroine alongside that great symbol of English liberty, Magna Carta. 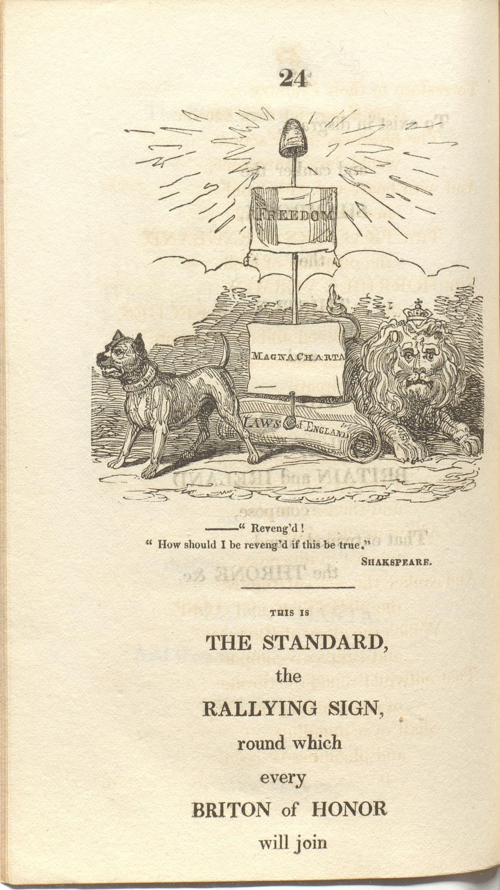 Since at least the English Civil Wars Magna Carta had been used as an important symbol of ancient English liberty, and in their public defence of Queen Caroline the radicals invoked the Great Charter with equal zeal. In the print Queen Caroline. Britain’s Best Hope!!, generously loaned by the Houses of Parliament for our exhibition Magna Carta: Law, Liberty, Legacy, Caroline leans, in a pose reminiscent of Britannia, against an anchor representing the constitution composed of ‘Magna Charta, The People,’ and the ‘Bill of Rights’. United, they represent ‘Britain’s best hope’ of stability and strength in the face of corrupt government.

This theme was even more emphatically pursued in William Hone’s satirical poem The Queen and Magna Charta (1820). Hone was a radical writer, publisher and occasional bankrupt of some renown, and the fact that this book went through at least five editions in 1820 is testament to how it captured the mood of the British public during the ‘trial’. Based on another well-known satirical poem by Hone, The House that Jack Built (which again invoked Magna Carta), this poem compared:

Who once made a Tyrant’s ambition to yield,

And demanding THE THING

with their ‘PUNY DESCENDANTS’ who now sat in judgment upon the Queen from the comfort of their seats in Parliament. Encouraging his readership to rise up against the establishment, Hone invoked Magna Carta throughout the poem as: 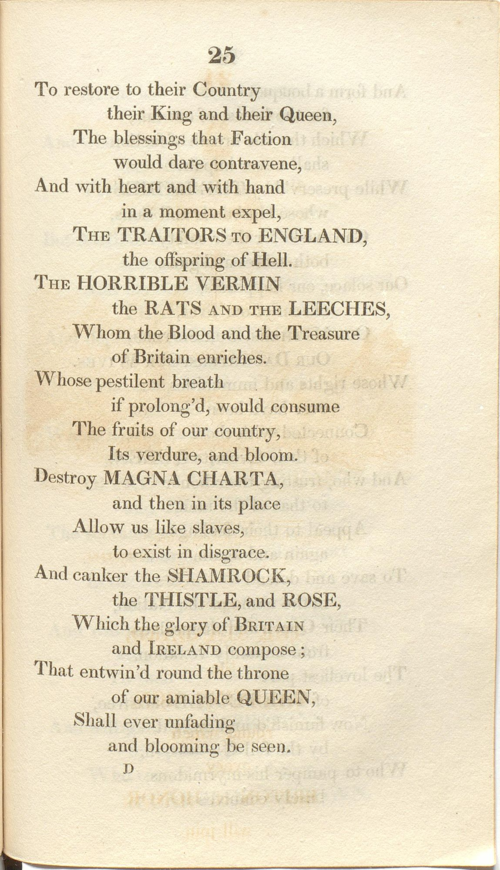 Such powerful propaganda, stressing the rights of British subjects as outlined in Magna Carta, had a significant effect on public opinion and altered the fate of Queen Caroline as the bill passed through Parliament. With memories of the French Revolution still vivid in the minds of many government ministers, and concerned that public outrage at the trial might lead to insurrection, Lord Liverpool, the Prime Minister, announced that the bill would be dropped, leading to country-wide celebrations on a large scale.

Caroline’s victory was short lived. Following the ‘trial’ Caroline accepted the government’s offer of an allowance of £50,000 a year if she went to live quietly abroad, but within a year she had died following a short illness. Her funeral cortège through London attracted a large crowd, who rioted when the government attempted to re-route the procession through the quieter backstreets of London. Eventually reaching Harwich, her remains were returned by boat to Germany where — in accordance with her wishes — she was buried by her father at their ancestral home in Brunswick.

Magna Carta: Law, Liberty, Legacy is on at the British Library, London, until 1 September 2015. Entry costs £12, under 18s enter free and other concessions are available.

Queen Caroline in fact refused the government’s offer of an allowance of £50,000 a year to stay abroad as a duchess, and her return to England was for her to remain Queen, she in fact tried to attend the Coronation but was refused entry. She fell ill almost immediately after & suspect she had been poisoned. George even had a spy installed when she was on her death bed.