The Document That (Almost) Changed the Course of History

You may be aware that some of the most famous documents in the world are currently on display at the British Library. One of those is Magna Carta (for good measure, we have no fewer than 6 of the medieval copies in our exhibition); others are the Petition of Right and English Bill of Rights (both kindly loaned to us by the Parliamentary Archives) and the US Bill of Rights (on loan from the US National Archives). The last-named is visiting the United Kingdom for the very first time, and is a particular favourite of ours. It bears the signature of John Adams, Vice President (and later 2nd President) of the USA (d. 1826), and it was sealed by Delaware in January 1790 before being returned to the federal government. It's a truly impressive item, supplying the first 12 proposed amendments to the US constitution.

The signature of John Adams and seal of the General Assembly of Delaware, at the foot of the Delaware copy of the US Bill of Rights (courtesy of the US National Archives, Washington, DC)

And if all that is not enough, the British Library also has on show, again for the first time in the United Kingdom, a manuscript of the United States Declaration of Independence, loaned by New York Public Library! Like the other documents we've mentioned, we're absolutely thrilled to have the Declaration of Independence in our Magna Carta exhibition. But there's a curious story behind this particular document, and we thought we'd share it with you.

The manuscript in question was written by Thomas Jefferson himself, who drafted the Declaration of Independence and later went on to become 3rd President of the USA (1801–1809; d. 1826). Jefferson had been profoundly influenced by Magna Carta in his legal thinking, and while he did not mention the Great Charter by name in the Declaration, many of its concepts derived ultimately from Magna Carta. Among the charges levelled against King George III were, 'For cutting off our Trade with all parts of the world; For imposing Taxes on us without our Consent; For depriving us of the benefits of Trial by Jury.'

What is particularly important about the manuscript on display at the British Library this summer is that it preserves Jefferson's original text of the Declaration of Independence, before it had been amended and ratified by his fellow delegates of the Second Continental Congress at Philadelphia in July 1776. Jefferson made his copy in the days immediately following the ratification of that document, and he underlined those words and phrases which had been removed. 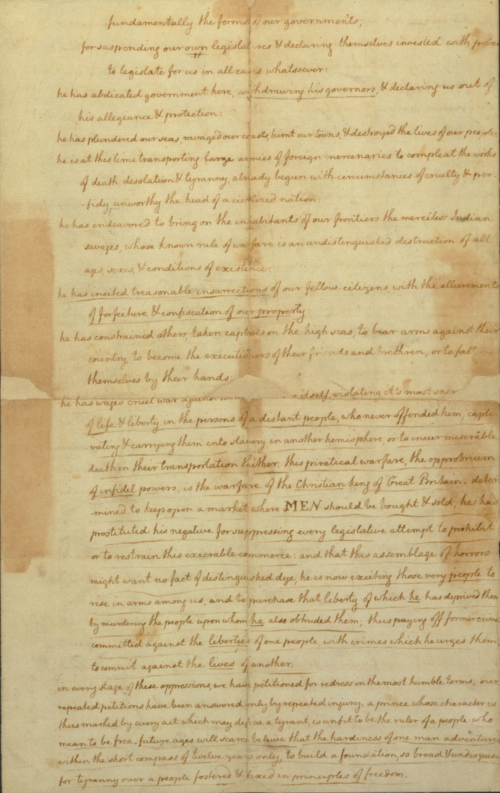 Certain of the passages in the draft Declaration of Independence deleted by the Second Continental Congress are worthy of special attention. At the bottom of the third page, Jefferson had originally written, '[George III] is unfit to be the ruler of a people who mean to be free. Future ages will scarce believe that the hardiness of one man adventured within the short compass of twelve years only, to build a foundation, so broad and undisguised, for tyranny over a people fostered and fixed in principles of freedom.' Students of American history will search in vain in the published text of the Declaration for the words underlined above. They were struck out in Philadelphia before that document was ratified, with the sentence in question instead ending, 'is unfit to be the ruler of a free people'.

An underlined passage in the Declaration of Independence, representing words that did not make it into the final, published version (courtesy of New York Public Library)

There are many other such words and phrases in Jefferson's manuscript of the Declaration, and you really have to see it in person at the British Library this summer in order to get a true impression of how much it had been revised. But a second passage in this, one of the most famous documents in the world, has inspired the title of this blog-post. The phrase in question is found on the same page as the previous passage cited, and one of the words is written in block capitals for further emphasis: 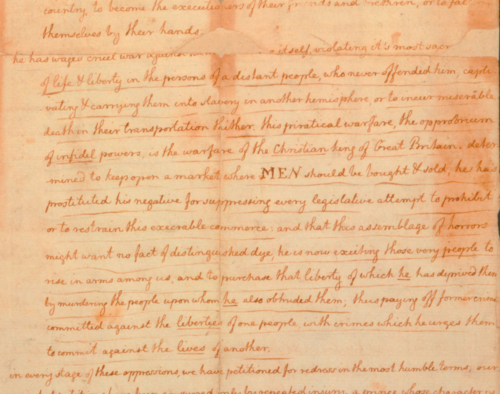 Thomas Jefferson's denunciation of the slave trade, later removed from the final version of the United States Declaration of Independence (courtesy of New York Public Library)

'He has waged cruel war against <...> itself, violating it's most sacr<ed ...> of life and liberty in the persons of a distant people, who never offended him, captivating and carrying them into slavery in another hemisphere, or to incur miserable death in their transportation thither. This piratical warfare, the opprobrium of infidel powers, is the warfare of the Christian king of Great Britain, determined to keep open a market where MEN should be bought and sold, he has prostituted his negative for suppressing every legislative attempt to prohibit or to restrain this execrable commerce.'

Now, we're not going to enter here into the debate about Thomas Jefferson's attitude to slavery. He expressed opposition to the slave trade throughout his career and in 1807 he signed a bill that prohibited slave importation into the United States; that said, Jefferson was also the owner of hundreds of slaves. However, it does strike us that this passage, with its forthright language ('this piratical warfare', 'this execrable commerce'), could easily have changed the course of history if adopted in America as early as 1776. You'll have to come to the British Library to see this awe-inspiring document with your own eyes ...

Magna Carta: Law, Liberty, Legacy is on display at the British Library until 1 September 2015. Entrance costs £12 for adults, under 18s go free, and other concessions are available.