When the French Invaded England

By King John’s death in October 1216, England was in the midst of civil war, the eastern half of the kingdom controlled by those opposing the king. Following the papal annulment of Magna Carta, the rebel barons had invited Louis, the king of France’s eldest son (the future Louis VIII, r. 1223–1226), to invade England, offering him the English throne. Louis’s supporters pointed out that John had illegally surrendered his kingdom to the Pope without the consent of his barons. Louis also had something of a claim to the English throne through his marriage to Blanche of Castile, one of John’s nieces.

An initial contingent of knights were sent to protect London in November 1215, before Louis landed along the Kentish coast in May 1216 and first made his way towards London. There he was welcomed by the rebel barons and citizens of London with a great procession at St Paul’s Cathedral. Sermons preached in the churchyard at St Paul’s Cross urged Londoners to support the French prince. 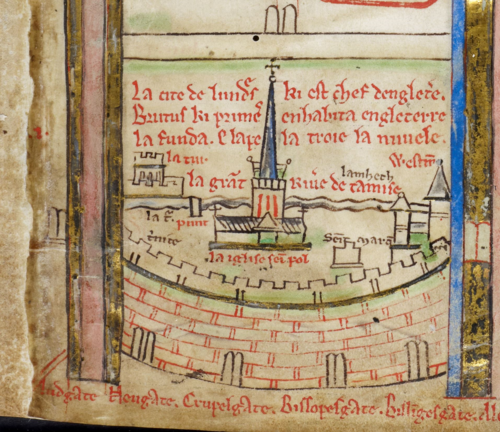 St Paul’s Cathedral at the centre of London from the itinerary from London to Apulia preceding Matthew Paris’ History of the English, Royal MS 14 C VII, f. 2r

According to calculations, by October 1216 a large majority of the barons were in revolt: only the holders of one quarter of the baronies and just under one third of the greatest barons remained loyal to the king. Ultimately, however, Louis’ campaigns in England proved unsuccessful. John’s death and the coronation of his young son Henry III (r. 1216–1272) on 28 October 1216 meant that the target of many of the barons’ personal complaints was no longer in the picture, paving the way towards an eventual conclusion to the barons’ revolt.

While King John had quickly sought Magna Carta’s annulment, Henry III’s regency government revised the charter and on 12 November 1216 issued the first of what would be several new versions throughout the 13th century. It was issued in the 9-year-old king’s name but sealed by the papal legate, Guala, and the regent, William Marshal, Earl of Pembroke (d. 1219). 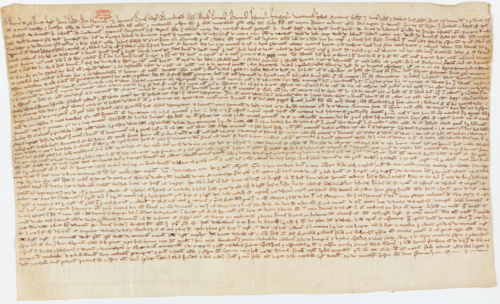 This new version omitted the security clause and other controversial features of the 1215 charter, making it a much shorter text, 2106 medieval Latin words compared with 3541. Thanks to a loan from the Archives nationales in Paris we’re able to include this contemporary copy of the charter in our major exhibition Magna Carta: Law, Liberty, Legacy. This copy most likely ended up in Paris after coming into Louis’ possession before his final departure from England in 1217.

By reissuing Magna Carta, Henry III’s supporters hoped to tempt away Louis’s supporters or at least tempt them into negotiations. Unfortunately, though, there were limited immediate effects and conflict continued into the following year, until a decisive confrontation on 20 May 1217 at Lincoln Castle finally broke a long siege of the city by Louis’ forces. The final blow to Louis and his supporters came two months later when Hubert de Burgh, castellan of Dover, destroyed a fleet bringing reinforcements from France in a sea battle off the coast at Sandwich.

The chronicler of St Albans, Matthew Paris (d. 1259), illustrated both events on two facing pages of his Chronica maiora, where he also included detailed accounts of the reigns of John and Henry III. This fantastic manuscript has been loaned to the British Library from Corpus Christi College, Cambridge. 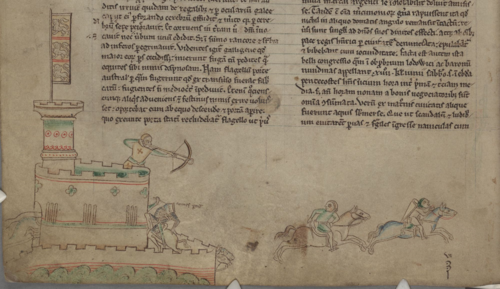 On the left page, Lincoln Castle has already been taken by the king’s forces – the royal standard flies from the castle turret while a hand emerges from the base killing Thomas, count of Perche and commander of the French troops. The facing page is in the midst of the Battle of Sandwich where an English soldier boards a French vessel while Frenchmen jump overboard to escape capture. Immediately to the left one of the bishops, via a scroll-shaped speech bubble, absolves ‘those who died for the liberation of England’.

A peace treaty drawn up between the two sides on 11 September 1217 saw Louis relinquish his claim to the English throne, his English lands, and agree to return to France. A further condition of the peace treaty was the confirmation of Magna Carta. Like in 1216, the 1217 charter was also authenticated with the seals of Guala and William Marshal since Henry III still had no Great Seal of his own. You can see an engrossment of the 1217 charter in our exhibition, alongside the other reissues of Magna Carta, thanks to the Bodleian Library loaning to us the charter preserved at Oseney Abbey, just outside Oxford. 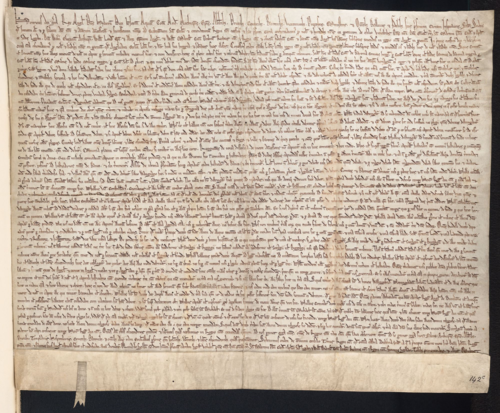 This reissue included an important new clause on the running of county and hundred courts and the stipulation that all unauthorised castles built during the war were to be destroyed. Also, for the first time there was a separate charter for the royal forests, which included relevant clauses once in Magna Carta. It was to differentiate the two charters that Magna Carta was first referred to as ‘Magna Carta’ (the Great Charter).

We are very grateful to the Archives Nationales in Paris, the Bodleian Library in Oxford and Corpus Christi College, Cambridge for loaning these fascinating documents for our Magna Carta exhibition, open now until 1 September.