Getting Under the Covers of the St Cuthbert Gospel

This week has seen the launch at the British Library on Monday and at Trinity College, Dublin on Wednesday of a new book, The St Cuthbert Gospel: Studies on the Insular Manuscript of the Gospel of John, edited by Claire Breay, Head of Ancient, Medieval and Early Modern Manuscripts at the British Library, and Bernard Meehan, Head of Research Collections and Keeper of Manuscripts at Trinity College, Dublin. 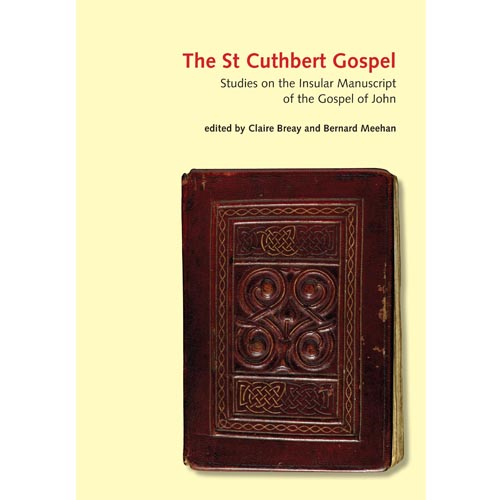 The St Cuthbert Gospel is the earliest intact European book and a landmark in the cultural history of western Europe. Now dated to the early eighth century by Richard Gameson and Leslie Webster, the manuscript contains a beautifully written copy of the Gospel of John in Latin and is famous for the craftsmanship and outstanding condition of its contemporary decorated leather binding. Found in Cuthbert's coffin when it was opened in Durham Cathedral in 1104, the Gospel was acquired for the national collection following a major fundraising campaign in 2011-12.

One of the most exciting aspects of the long preparation for the new book on the Gospel was the day that we took the manuscript to the Natural History Museum for a CT scan. The videos produced from this scan have allowed us to look inside the book as never before, to appreciate the many remarkable features of this manuscript. We were able to examine the extraordinary refinement and careful shaping of the wooden boards, establishing that at their maximum the left (front) board measures only 2.4mm thick and the right (back) board only 1.5mm. We could see the cords beneath the raised frames in the decoration and we could examine for the first time the much-debated foundation material lying beneath the raised plant-motif decoration in the centre of the left cover. Roger Powell had suggested that the foundation material might be cord or leather, while Jim Bloxam and Kristine Rose found more recently (in making a facsimile of the binding which they generously made available to the project) that gesso could be used to produce comparable results. It was immediately apparent from the CT scan that neither cord nor leather had been used for the foundation of the central motif, as it is a clay-like material which completely fills the space between the leather and the board.

Cross-section of left board from CT scan, showing clay-like material between the leather and the wooden board.

In the CT scan and in an X-ray image this clay-like material shows as a dull grey, completely different from the gesso used in the most accurate modern facsimile by Rose and Bloxam, which shows as black in the X-ray image. 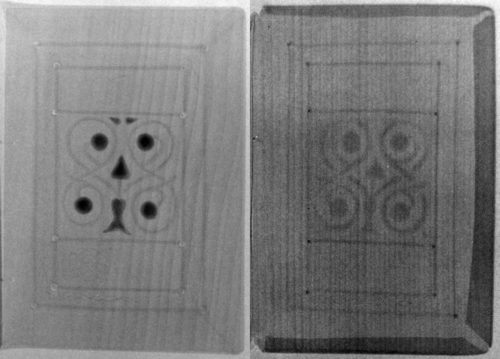 X-ray of left board (facsimile on left and original on right).

Christina Duffy, Imaging Scientist at the British Library, has produced videos of the St Cuthbert Gospel from the CT scan which show the manuscript, its wooden boards, the cords which lie under the raised frames in the decoration and a cross-section through the whole manuscript showing the structure of the book and the raised decoration. You can watch the video (courtesy of Christina Duffy) here:

In his chapter in the new book launched this week, Nicholas Pickwoad explains in detail how the central motif on the binding appears to have been made using a matrix, carved with the plant design, to impress the wet leather over the clay-like material on to the wooden board.

This new collection of essays is the most substantial study of the book since the 1960s, and is the culmination of our work to promote new research on the Gospel since its acquisition by the British Library. As well as Nicholas Pickwoad's chapter on the structure and production of the binding, the book includes detailed commentary on: Cuthbert in his historical context by Clare Stancliffe; the codicology, text, script and medieval history of the manuscript by Richard Gameson; the decoration of the binding by Leslie Webster; the Irish pocket Gospels by Bernard Meehan, the other relics found in Cuthbert's coffin by Eric Cambridge; and the post-medieval ownership of the book by Arnold Hunt. The book, which significantly revises the existing scholarship on one of the British Library's most recent acquisitions, is now available through the Library's online shop. 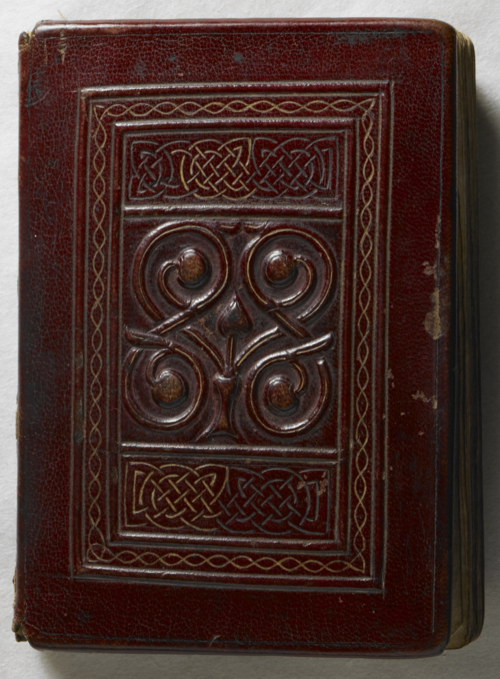