How The Forest Charter Was Saved From Destruction

A short while ago we blogged about Magna Carta's smaller cousin, known as the Charter of the Forest. In 1217, Magna Carta's clauses relating to forest law were removed to a separate document, the Forest Charter. In our current exhibition we have on display a manuscript of the 1225 version of the Forest Charter, with the seal of King Henry III and its original medieval seal bag still attached. (You can also see it on our website and in the catalogue that accompanies our exhibition.) The Forest Charter is a beautifully preserved manuscript, but how has it managed to survive until the present day? 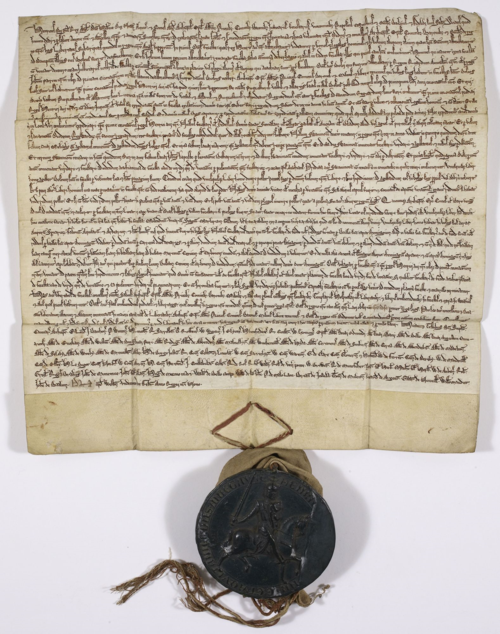 A few days ago I was searching through our departmental archives, in quest of information about how the British Museum acquired our manuscript of the Forest Charter (Additional Charter 24712). I'd been prompted to do my search by Professor Nicholas Vincent (University of East Anglia), Principal Investigator of the Magna Carta Project, who is trying to determine the provenance of all the Magna Carta documents. I knew that the British Museum (the ancestor of the British Library) had acquired this item from a certain Mr Cain on 16 August 1875. But what I hadn't realised was the circumstances whereby Cain had acquired it, until I came across the following letter, bound in a volume of departmental correspondence ...

The letter itself is addressed to Edward Bond (d. 1898), Keeper of Manuscripts at the British Museum (1866–78), and it is signed by R. E. Cain. What it reveals about the Forest Charter, and its potential fate, is rather interesting. 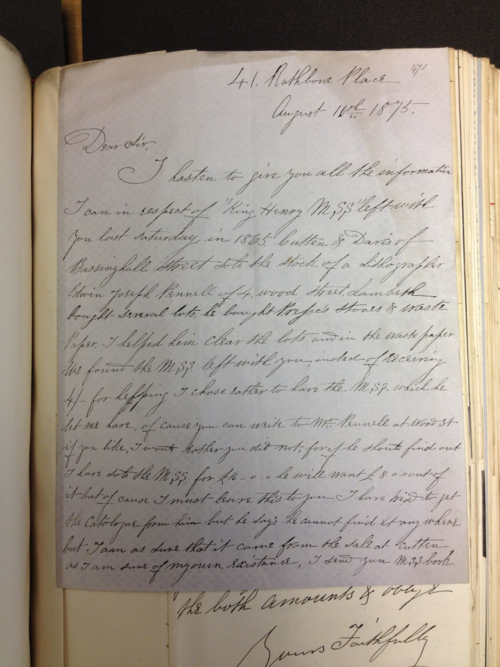 I hasten to give you all the information I can in respect of "King Henry MSS" left with you last Saturday. In 1865, Cutten & Davis of Bassinghall Street sold the stock of a lithographer. Edwin Joseph Pennell of 4, Wood Street, Lambeth bought several lots, he bought Presses, stones & waste Paper. I helped him clear the lots and in the waste paper we found the MSS. left with you, insted [sic] of receiving 4/- for helping I chose rather to have the MSS. which he let me have, of cause [sic] you can write to Mr Pennell at Wood St if you like, I would rather you did not, for if he should find out I have sold the MSS. for £16-0-0 he will want £8-0-0 out of it but of cause [sic] I must leave this to you. I have tried to get the Catalogue from him but he says he cannot find it any where but I am as sure that it came from the sale at Cutten as I am sure of my own existance [sic]. I send you MSS book I bought at a book stall I believe it to be worth something, it's the best book on birds I have ever seen, if you can give me say £5-0-0 or anything less I should be pleased to part with it, I am known to Mr Butler, Francis Harray Esqr. St James's Street, Mr Waller Fleet Street, as always being on the look out for Autographs, MSS and old books. 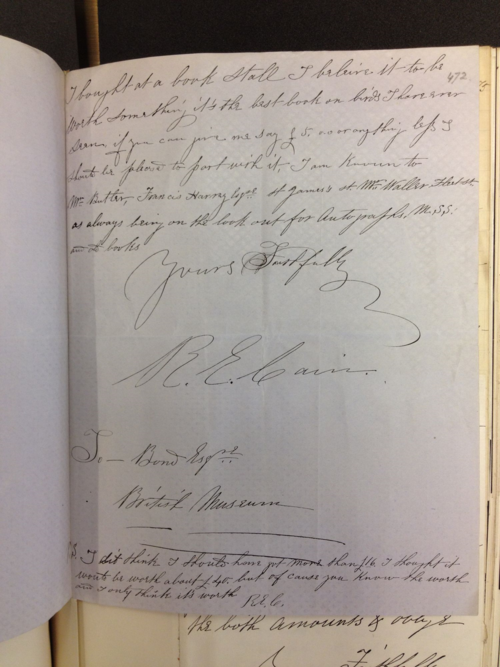 So piecing all this together, what can we deduce (apart from the fact that I'm beginning to sound a lot like Sherlock)? According to Mr Cain, the British Library's precious manuscript of the Forest Charter had been found among the waste paper of an unnamed lithographer, bought by one Edwin Joseph Pennell in 1865. Cain had asked to keep the document rather than receiving the 4 shillings he was owed for helping Pennell, and 10 years later he sold it to the British Museum for the more princely sum of £16. Note, however, Cain's rather defective negotiating skills — he believed the Forest Charter ("King Henry MSS") to be worth as much as £40, but he later offered a separate book of birds to the British Museum for around £5 "or anything less"! (The book of birds is now Additional MS 29892, and it dates from the 18th century.) Cain vouched for the fact the original sale had taken place at Cutten & Davis of Basinghall Street (near the Guildhall in the City of London), but he could not procure a copy of the catalogue from Mr Pennell, and nor was he minded that the British Museum should approach Pennell, because otherwise he might demand a share of the loot!

All in all this is a pretty rum tale, and Professor Vincent has observed to me that the report of the alleged discovery of this manuscript reminds him of the British television series Steptoe and Son (set in a rag-and-bone shop). But, if we do take Mr Cain at his word, it does suggest that our magnificent Forest Charter had been thrown away in 1865, only to be rescued quite by chance among some "Presses, stones & waste Paper".

And this manuscript is not the only fortuitous survival among the British Library's collections. Also in our Magna Carta exhibition are two manuscripts of the original Magna Carta, issued by King John in 1215. One of these two precious manuscripts was damaged in a fire in 1731 (and by a subsequent, failed attempt at restoration in the 19th century); the other was reputedly found in a London tailor's shop in the 17th century, where presumably it had been consigned as waste (I often tell our visitors that it would have been chopped up and used to line gentleman's collars). So our Forest Charter joins this lists of some of the greatest documents in history which nearly, but very nearly, didn't make it to the present day.

PS  We'd love to hear from our readers if they know anything further about the elusive Mr Cain, or Mr Pennell or the sale at Cutten & Davis in 1865. Get in touch with us via Twitter, @BLMedieval

PPS  Our exhibition, Magna Carta: Law, Liberty, Legacy, if you haven't heard, is the largest and most significant ever devoted to Magna Carta, and is on at the British Library until 1 September 2015

Posted by Ancient, Medieval, and Early Modern Manuscripts at 12:37 AM