The Beginnings of the Codex

Over the first few centuries A.D., a change occurred in how people created and consumed books in the Graeco-Roman world. In the early first century, books were on papyrus rolls. By late antiquity, the majority of books were produced as codices, not very different from the books we still use today, and parchment had supplanted papyrus as the writing support of choice. How and why this transition occurred is a question that continues to occupy the attention of anyone interested in the early history of the book. There are three main phenomena that are clearly interrelated: the transition from roll to codex, the transition from papyrus to parchment, and the rise of Christianity. That last factor may come at first as a surprise, but with only a very few exceptions (and even they are disputed) all fragments of the New Testament from the first few centuries are taken from codices, not rolls. But literary texts (especially those written in Greek) continue to be written primarily on rolls until the fourth century. Certainly, it seems that early Christians had a clear preference for the codex form. Does it perhaps mean that the rise of Christianity helped the codex to gain the upper hand, too? We still have too little evidence to tell this story as clearly as we would like, and we are always at the mercy of some new piece of evidence overturning everything we believed to be true. (The recently-discovered Peri Alupias of Galen, for instance, contains references to parchment codices at Rome in the late second century, providing further evidence for the use of the codex form at an earlier stage.) It’s also important to note that the majority of our evidence for the early book comes from Egypt, and we should be cautious about generalising too much from this: Greek books in Egypt may have looked rather different from Latin books in Rome. 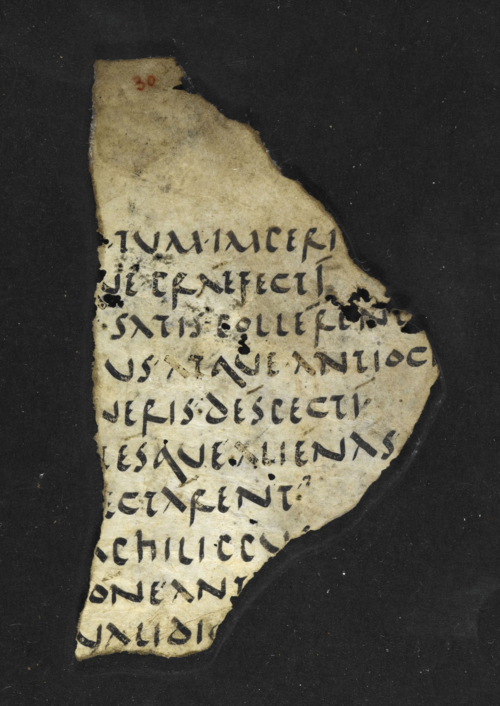 It’s against this backdrop that we present our latest addition to Digitised Manuscripts. Though only a very small fragment (85x50mm, about two-thirds the size of your average smartphone), Papyrus 745 (P. Oxy. I 30) is of particular significance for the early history of the book. It is the earliest fragment of a Latin codex yet known, and perhaps the earliest codex in any language, aside from wax tablets, such as the Posidippius codex. (P. Oxy. 470, a Greek mathematical treatise, is listed on the Leuven Database of Ancient Books as being from the first century, but it is not clear where this date comes from – all studies I have seen report it as being of the third century.) Found along with that great treasure-trove of texts at Oxyrhynchus, it is generally dated to the end of the first century or beginning of the second, primarily based on the script. Indeed, even Grenfell and Hunt, who first edited the fragment in 1898, remarked that the script was very similar to that of the De Bello Actiaco, an epic poem preserved on a papyrus found at Herculaneum (and thus to be dated before the eruption of Vesuvius in A.D. 79).But the fact that the text was in codex form, and written on parchment rather than papyrus, led the first editors to deem it “not earlier than the third century”. A later study by Jean Mallon made clear that the fragment must date from around 100, on palaeographical grounds. Dating ancient book-hands precisely is very difficult, and in our catalogue entry we have dated the manuscript to “Late first-early second century”. The text preserved on the manuscript is known as the De Bellis Macedonicis (On the Macedonian Wars), as from the small amount of text we have, it clearly refers to the wars between Rome and Macedonia in the third and second centuries BC. It was initially suggested that it was an extract from Pompeius Trogus’ lost Historiae Philippicae, though a recent study by Alexander Kouznetsov has suggested, based on the fragment’s prose rhythm, that it may be the work of Lucius Arruntius.

Where does this fragment fit into the story of the development of the codex? The fact that it is a parchment codex, and written in Latin, makes it more likely than not that it was created outside of Egypt (Bischoff believed it originated in Italy). We have roughly contemporary evidence for parchment codices from the poetry of Martial, and there is additional evidence (including perhaps from the New Testament, at 2 Tim. 4:13) of parchment notebooks being particularly popular with travellers, as they were more easily transportable than bookrolls. Could we see the fragment then as supporting the hypothesis that the codex grew to prominence in Rome (in contrast to the bookrolls favoured in the East), and that our lack of additional early codices is due largely to the fact that the majority of our early books come from Egypt, and that the Latin-speaking West is seriously underrepresented in the evidence we have? It’s certainly possible. But we must be cautious. With such a small fragment we have no way of knowing, for instance, how large the original page or bifolium would have been, let alone the size of the codex itself. (We can at least be certain that it’s a codex and not a bookroll because it is clearly the same text on both sides, and when bookrolls are reused, the text tends to be upside down on the verso relative to the recto.)

There is far more to say about this fragment, but that will have to wait for another day. This tiny scrap of parchment is invaluable for the glimpse it gives us of what codices looked like in the early Roman Empire, and while the discovery of additional early Latin books would greatly help us to understand more about book production in the first and second centuries, for the moment, the De Bellis Macedonicis is assured of its status as the earliest Latin codex in existence.