Equality, Huh? Who Would Have Thought It?

Our current major show, Magna Carta: Law, Liberty, Legacy, is about to enter its final weeks. The exhibition closes on 1 September, so hurry to see it while you still have the chance. If you're not aware, the reviews have been excellent (blush) and it's been the highest attended British Library exhibition to date.

There are all sorts of weird and wonderful objects in the show, ranging from King John's teeth to an executioner's axe. Here, researcher Alex Lock describes two of our favourite items in the exhibition, made at the time of the French revolution. 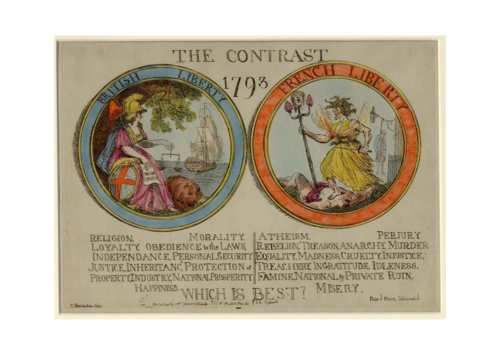 The Contrast, 1793: British Liberty, French Liberty, Which is Best? (British Museum 1861,1012.47): reproduced by kind permission of the British Museum

Engraved by Thomas Rowlandson (d. 1827) in 1792, at the outbreak of the French Revolutionary Wars, this print entitled ‘The Contrast’ compares ‘British Liberty’ with ‘French Liberty’ following the revolution of 4 July 1789. Invoking Magna Carta, the print represents Britain as peculiarly blessed, prosperous, law-abiding and politically advanced, especially when compared with the ancien regimes of continental Europe or the anarchy of revolutionary France. The roundel on the left features Britannia holding ‘Magna Charta’ (symbolising law), with a lion sitting at her feet (symbolising loyalty and strength), and a ship sailing into the distance (symbolising prosperity, wealth and military might). In contrast, the cameo on the right depicts so-called French liberty in very unflattering terms: a gruesome French Medusa tramples a decapitated corpse and carries a trident impaled with hearts, while a corpse hangs from a lamp-post in the background.

Printed in the aftermath of the September Massacres – a wave of killings in France in late summer 1792 – and the arrest of King Louis XVI (who was soon to be executed), 'The Contrast' was designed to expose the dangers of Jacobin ‘French Liberty’, at the risk of revolutionary fervour spreading to Britain. This was exactly its purpose. Although etched by Rowlandson, the image was originally designed by Lord George Manning for the Association for the Preservation of Liberty and Property, whose aim was to counteract Jacobin and reformist sentiments in Britain by circulating anti-French Revolution propaganda.

If the imagery is not clear enough, the words associated with each form of ‘liberty’ are listed underneath the roundels. The keywords for Britain – ‘Religion, Morality, Loyalty, Obedience to the Laws’ – are compared with those for revolutionary France – ‘Atheism, Perjury, Rebellion, Treason, Anarchy’ and worst of all ‘Equality’! The viewer must decide - ‘which is best’? 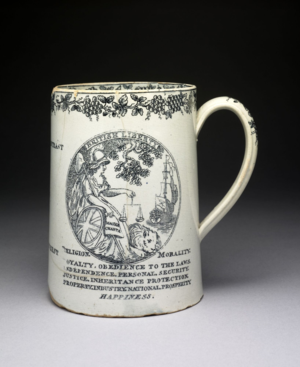 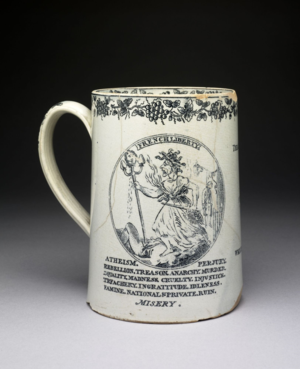 The image wasn't only disseminated in print form. We love the fact that it was also reproduced on a large earthenware mug, for those patriots who wished to compare British and French liberty with a cup of something nice!

Both the print and mug are currently on display in the British Library's Magna Carta exhibition, and we are extremely grateful to the British Museum for so generously lending them to us. You can buy tickets for the exhibition here (and remember, under 18s get in for free, the best deal in town!).

Posted by Ancient, Medieval, and Early Modern Manuscripts at 3:00 PM