New uploads to the Catalogue of Illuminated Manuscripts

We continue to add manuscripts from the Additional collection with selected images to the Catalogue of Illuminated Manuscripts. Here is a selection of favourites from the upload in June.

Perhaps the most spectacular of these works is Additional MS 16997, a Book of Hours produced in Paris, with 17 jewel-like miniatures, mostly attributed to the Boucicault Master, whose advanced depiction of light and perspective can be seen in the following miniature. The border, too, is a work of art, with naturalistic birds among the lustrous foliage. This treasure was owned by none other than Étienne Chevalier, Treasurer of France in the mid-15th century. 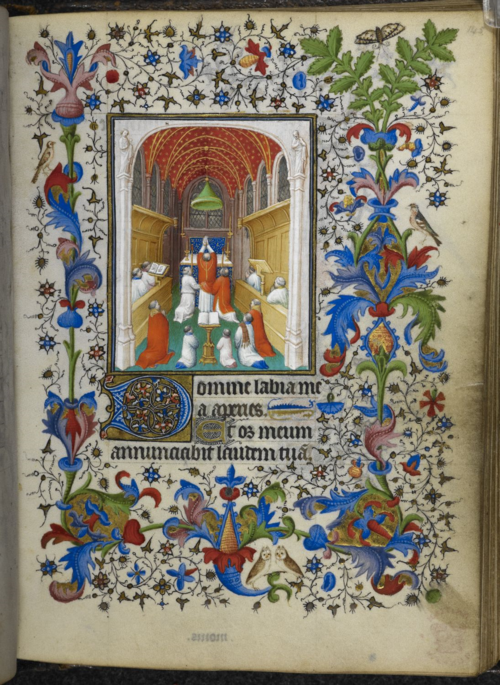 The celebration of Mass, with two owls, two other birds and a butterfly in the border, France, Central (Paris), 1st quarter of the 15th century, Additional MS 16997, f. 145r.

A number of these illustrated historical works have been catalogued. The Histoire Universelle was featured in a blogpost in February and two of the manuscripts are currently on display in our Treasures gallery. The Histoire begins with the biblical story of Creation and includes Greek and Roman legends. The following images have recently been published from two French manuscripts, one of the 13th century and one of the late 14th century: 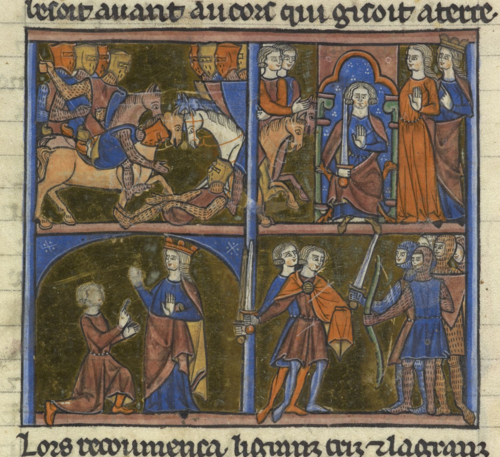 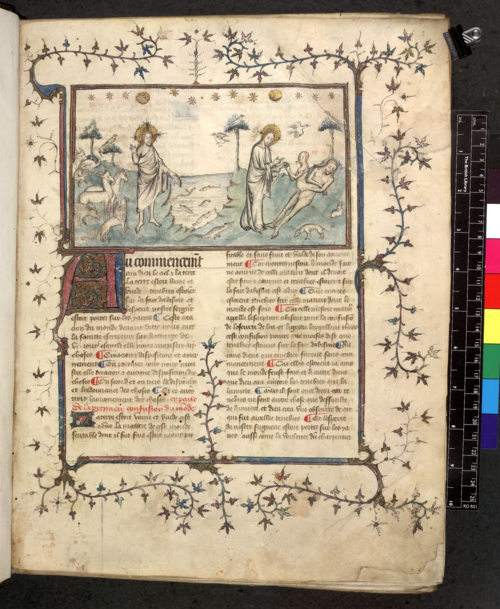 The Creation of the animals and the Creation of Eve, France, Central (Paris), last quarter of the 14th century, Additional MS 25884, f. 2r.

Two manuscripts associated with women appear for the first time in the catalogue. The first contains a version of the Miroir des Dames, a treatise on queenship translated from Latin for Jeanne de Navarre (b. c. 1271, d. 1305) and other instructional works. It was made for Jean, Duke of Berry and of Auvergne (b. 1340, d. 1416), son of the king of France and collector of some of the greatest manuscripts and works of art of the era. 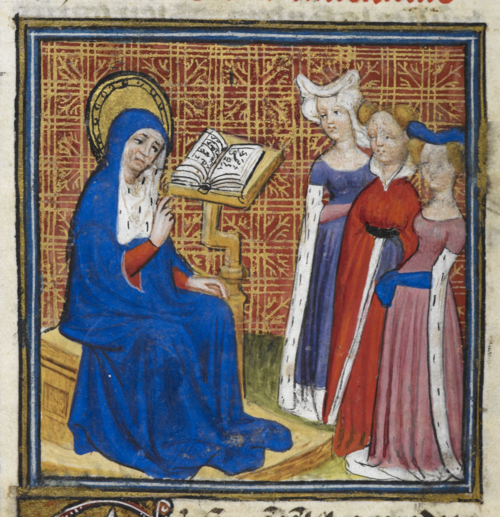 The other is the unique copy of the Dialogue de la duchesse de Bourgogne a Jesus Christ, a devotional work written especially for Margaret of York, sister of Edward IV, who married the Duke of Burgundy in 1468.  The image shows Christ visiting her in her chamber.  As always, Margaret is attired in the latest Burgundian fashion, and even Christ wears a rather luxurious red garment. 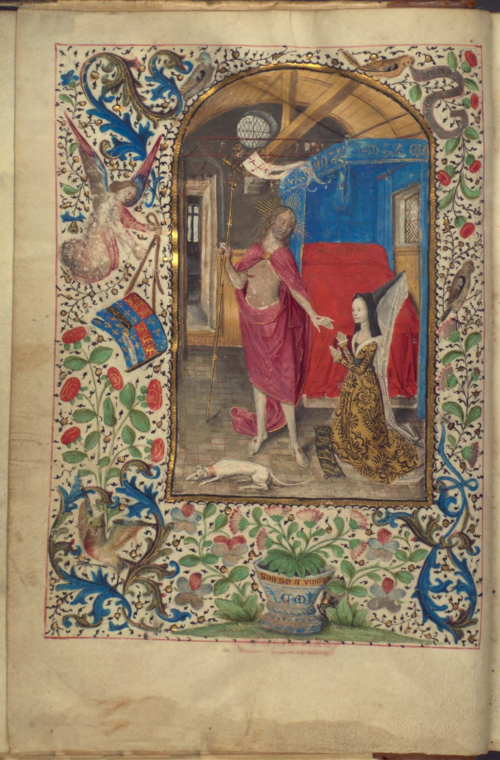 Newly included in the catalogue are nine liturgical manuscripts in the Mozarabic tradition, all from the monastery of Santo Domingo de Silos, near Burgos, produced in the 10th and 11th centuries.  Some contain musical notation and the style of illumination is unique.   The most highly decorated is an antiphonal with 23 large decorated initials. Petrus, one of the artists who worked on the Silos Apocalypse was responsible for some of the decoration. 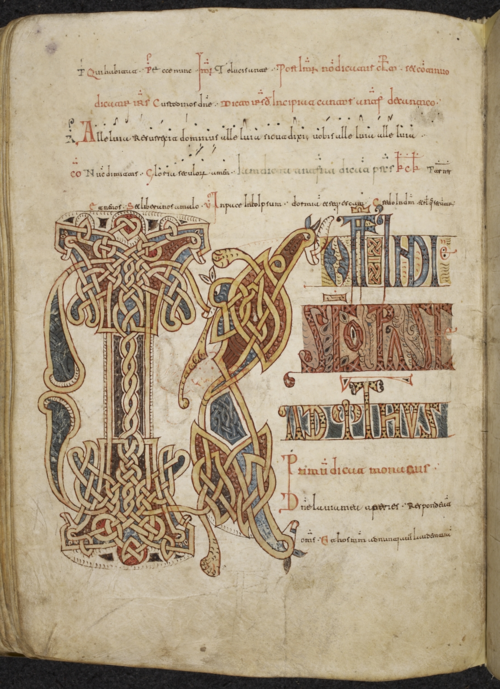 Monogram at the beginning of the Office of Easter with zoomorphic and interlace decoration; visigothic neumes, Spain, N. (Burgos, Silos), 4th quarter of the 11th century of 1st quarter of the 12th century, Additional 30850, f. 105v.

Another early manuscript, this time from Italy, is known as the ‘Montecassino Exultet Roll’ as it includes the Exultet, a hymn sung by a deacon during the consecration of the Paschal candle, during the Easter Vigil. The roll was made of 12 parchment membranes sewn together in c. 1075 and the text is in Beneventan minuscule. It includes this image of bee-keeping. 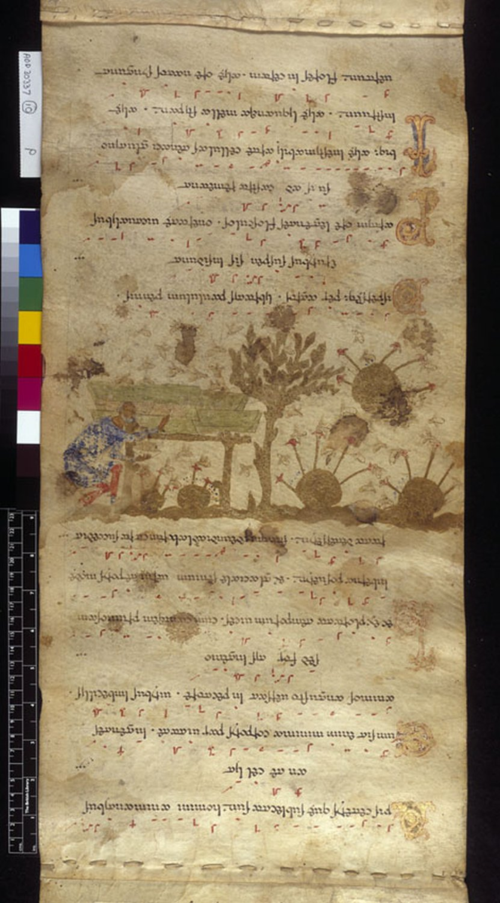 Hi - I was just working on the Miroir des dames text and believe that the French translation in this manuscript was done for Jeanne d'Evreux, from a Latin (not Italian) text written for Jeanne de Navarre by her confessor, Durand of Champagne. If I'm wrong, please enlighten me!

REPLY: You're quite right and thanks for spotting this, we've updated the post.