Magna Carta, The British Library and The National Archives

Putting together any major exhibition always calls upon the expertise and generosity of countless individuals. In the case of Magna Carta; Law, Liberty, Legacy -- which closes at the British Library on 1 September -- the curators (Claire Breay and Julian Harrison) and researcher (Alex Lock) were supported by a huge cast of specialists, who are name-checked in the exhibition catalogue.

Magna Carta: Law, Liberty, Legacy also includes a number of key loans from other institutions, carefully selected to complement the British Library's own collection items. One of our principal lenders has been The National Archives of the United Kingdom, without whose generosity the content and scope of the exhibition would have been greatly diminished. An immensely fun part of the 4 year-process of putting the show together was meeting with the specialists and conservators at The National Archives in order to select and refine the documents and artefacts we were able to borrow. You can see these items in person at the British Library, in the catalogue and on our dedicated Magna Carta website. But we are also showcasing them in this blog-post, in order to emphasise the vast range of materials at The National Archives and to underline our gratitude for so kindly being able to borrow them for the Magna Carta exhibition. 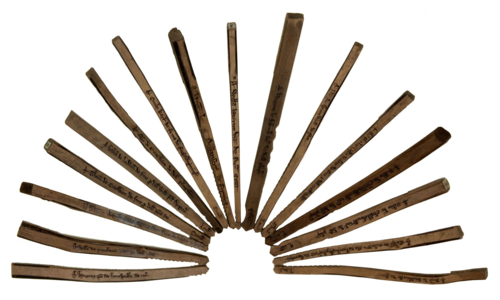 Tally sticks were used by officials of the Exchequer as physical proof of payments to the king, functioning in the same way as a modern receipt. Made of hazel wood, the sticks contained notches denoting the amounts that had been paid; the notched sticks were split into two lengthwise, one half (the stock) being held by the payer and the other (the foil) being retained by the Exchequer. When the accounts were audited, the pieces were fitted together to check that they tallied (hence the name). A little-known fact: it was the burning of old tally sticks in the chamber of the House of Lords that led to the destruction by fire of Parliament in 1834! 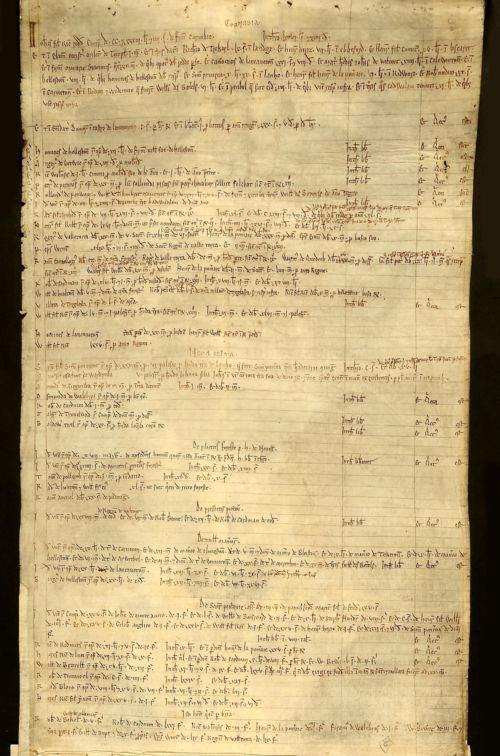 Each year, the English Exchequer’s audit of the sheriffs’ accounts was recorded on long rolls of parchment, known as Pipe Rolls owing to their shape when rolled for storage. The Pipe Rolls supply details of payments made to and by the Crown, and of debts still owed. Shown here is part of the Pipe Roll entry for Cornwall, compiled at Michaelmas 1214. The relevant membrane is sub-divided by headings such as ‘De Placitis Foreste’ (Forest Payments) and ‘De Scutagio Pictavie’ (The Scutage for Poitou).

It remains uncertain how many copies of Magna Carta were dispatched in 1215 and who were the intended recipients. A memorandum written by a clerk of the English Chancery on the reverse of the Patent Roll, more than a month after Magna Carta had been granted, notes that some 35 writs had been issued for the publication of Magna Carta in London, the Cinque Ports and various English counties. This memorandum also states that on 24 June 2 copies of Magna Carta were given to the Bishop of Lincoln, another to the Bishop of Worcester and 4 more to Master Elias of Dereham (steward of Archbishop Langton); Elias received a further 6 charters on 22 July, making a minimum of 13 Magna Carta manuscripts in total. 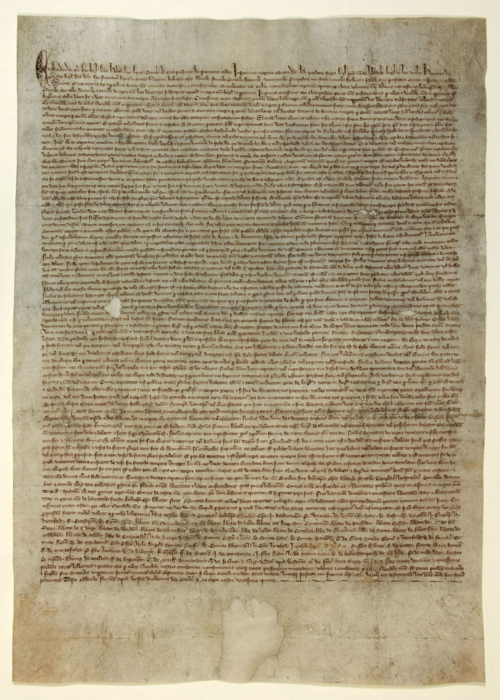 1297 confirmation of Magna Carta (The National Archives DL 10/197, reproduced by kind permission of the Duchy of Lancaster)

The most famous medieval confirmation of Magna Carta was that of King Edward I (r. 1272–1307) in 1297, since it was this text that was copied on to the Statute Roll. The confirmation took the form of a letter patent in which the king declared that he had inspected his father’s Magna Carta: he then recited the whole of the 1225 charter, before ordering that its articles be observed in every respect. Since Edward himself was in Flanders at this time, the letter was the work of the government at home, acting in his name. It was witnessed by Edward’s son, the future Edward II (r. 1307–27), at Westminster on 10 October 1297. We are extremely grateful to the Duchy of Lancaster for so kindly agreeing to lend this item to the British Library's Magna Carta exhibition. 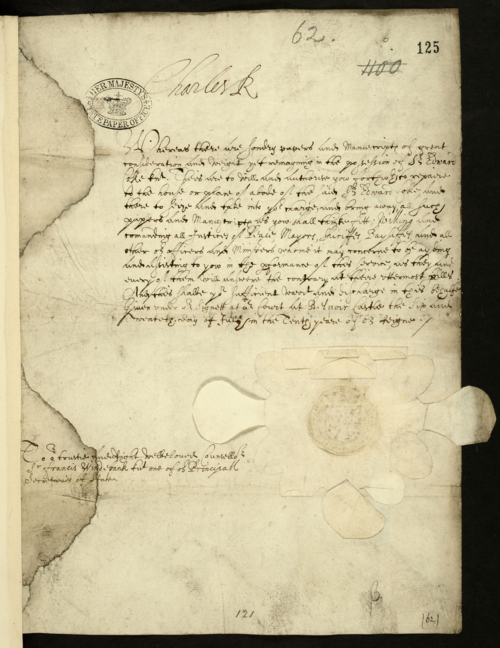 Sir Edward Coke (d. 1634), author of The Institutes of the Lawes of England, used Magna Carta to challenge the autocratic rule of the Stuart kings. In retaliation, King Charles I (r. 1625–49) commanded in 1634 that Coke’s papers be seized, as set out in this letter to the Secretary of State, Sir Francis Windebank (d. 1646). Concerned that ‘there are sondry papers and Manuscripts of great consideration and weight yet remayning in the possession of Sir Edward Coke’, the King directed Windebank ‘to repaire to the house or place of abode of the said Sir Edward Coke, and there to seize and take into your charge, and bring away, all such papers and Manuscripts as you shall think fitt’. 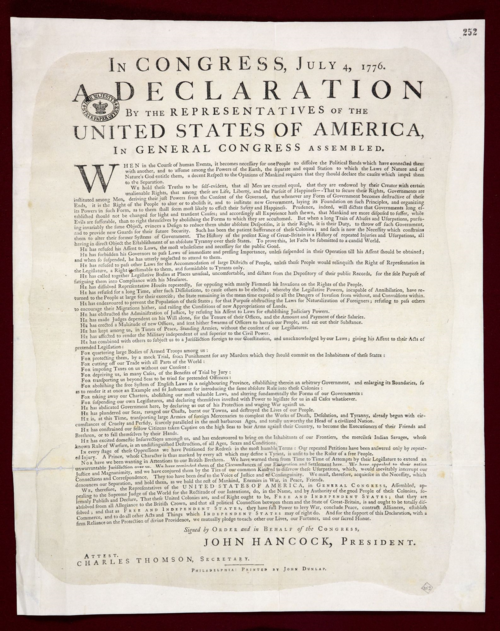 The United States Declaration of Independence was printed in Philadelphia by John Dunlap (d. 1812) on or around 4 July 1776, by order of the Second Continental Congress. No fewer than 26 copies of the Dunlap printing survive today, including 3 in London. This copy was discovered in The National Archives in 2008. 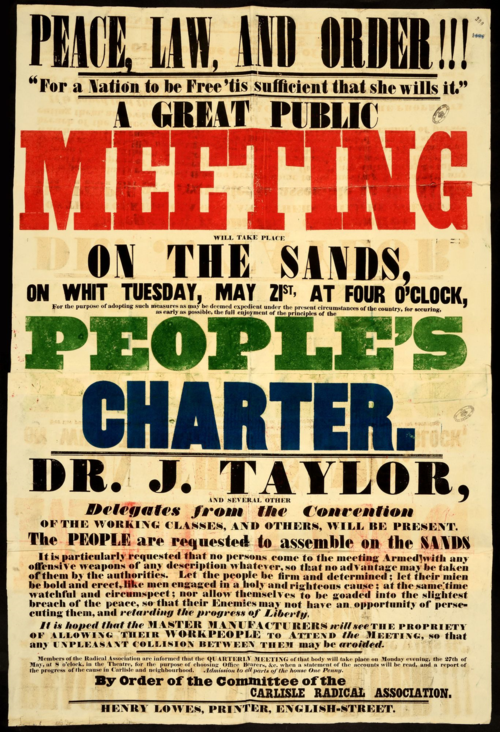 The Chartists used Magna Carta in their campaign to extend the franchise, as shown in this colourful poster, advertising a great public meeting to be held on the Sands at Carlisle on 21 May 1839. The poster promotes the speaker, Dr John Taylor, a leading Scottish Chartist and surgeon, and implores the crowd to come unarmed ‘so that their Enemies may not have an opportunity of persecuting them, and retarding the progress of Liberty’. The text continues in a menacing manner, ‘It is hoped that the Master Manufacturers will see the propriety of allowing their workpeople to attend the meeting, so that any unpleasant collision between them may be avoided.’ 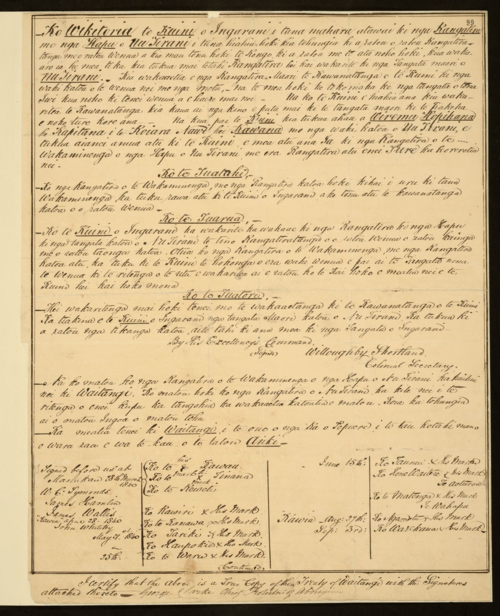 British sailors, whalers and missionaries settled in New Zealand from the early 19th century, but the British government became formally involved in its colonisation only in the 1830s. On 6 February 1840, the British signed the Treaty of Waitangi with a group of Maori leaders from the North Island. The Treaty ceded New Zealand to Queen Victoria (r. 1837–1901), who promised the Maori her protection and the same rights as ‘the people of England’, and established William Hobson (d. 1842) as Governor. It also gave the Crown the exclusive right to buy any lands the Maori wished to sell, while recognising their full ownership of lands, forests, fisheries and other possessions. The Treaty was prepared in English, but the vast majority of the more than 500 chiefs who ultimately signed it put their name to this Maori translation, copies of which circulated through New Zealand’s North and South Islands. Henry Williams (d. 1867), the missionary who prepared the translation, referred to the Treaty as the ‘Magna Charta’ of the Maoris, which would secure for them ‘their Lands, Rights and Privileges’. 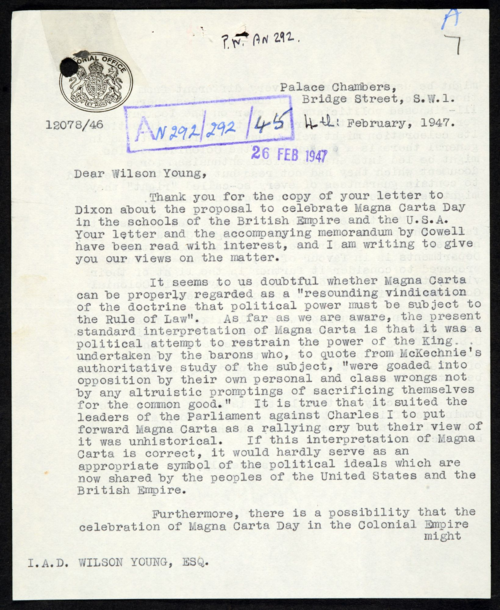 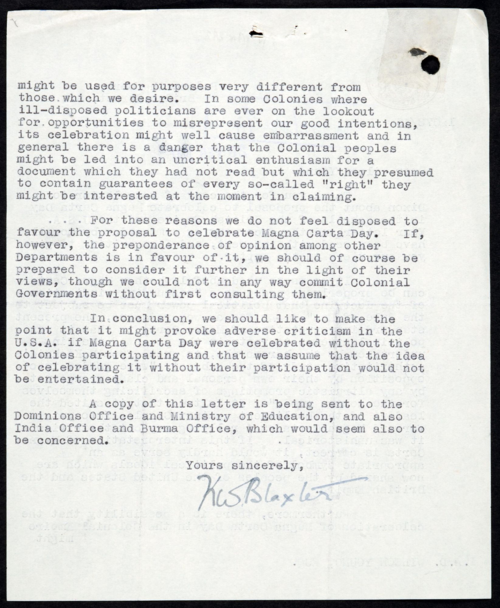 In 1947, it was proposed to make 15 June a public holiday in the British Empire and United States, in order to emphasise Anglo-American co-operation and to champion the document as a symbol of Western liberty. However, some British civil servants opposed the scheme, fearing that the celebration of civil liberties might provoke opposition to British imperial rule. K. W. Blaxter, Assistant Secretary in the Colonial Office, dismissed the proposal in very strong terms: 'In some Colonies where ill-disposed politicians are ever on the lookout for opportunities to misrepresent our good intentions, its celebration might well cause embarrassment and in general there is a danger that the Colonial peoples might be led into an uncritical enthusiasm for a document which they had not read but which they presumed to contain guarantees of every so-called ‘right’ they might be interested at that moment in claiming.' 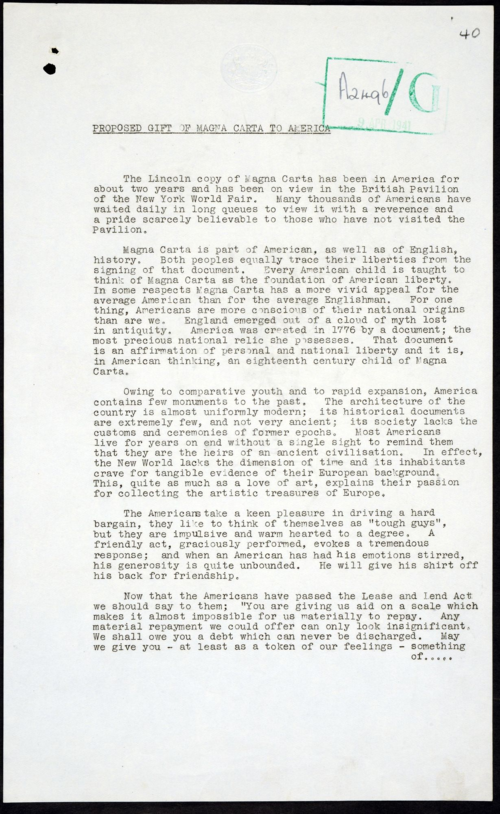 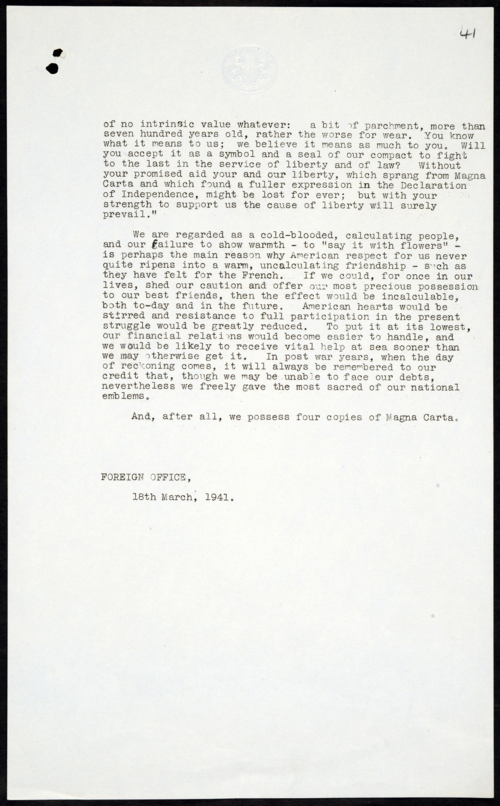 In March 1941, the British War Cabinet, led by Winston Churchill (d. 1965), contemplated giving the USA what one paper described as 'an old piece of parchment, of no intrinsic value whatever, rather the worse for wear', in order to persuade young American men to lay down their lives for liberties and freedoms. One British government official wrote that, ‘The gift of Magna Carta would be at once the most precious of gifts and the most gracious of acts in American eyes; it would represent the only really adequate gesture which it is in our power to make in return for the means to preserve our country.’ However, it was soon realised that the document in question, the possession of the Dean and Chapter of Lincoln Cathedral, was not the property of the British government to give away; and so the plan was quietly shelved. This is possibly the only time in history that one nation has tried to persuade another to enter a war on its behalf in return for an old piece of parchment!

To view all these wonderful items so kindly loaned by The National Archives, come to Magna Carta: Law, Liberty, Legacy at the British Library until 1 September 2015.