Shameful and Demeaning: The Annulment of Magna Carta

Today, 24 August 2015, marks an important date in history, one overlooked in this year of anniversaries (the Battle of the Somme, Waterloo, Agincourt, the De Montfort Parliament). For on this day 800 years ago, Pope Innocent III (1198-1216) issued a bull in which he described Magna Carta as 'shameful, demeaning, illegal and unjust', before declaring what we now call the Great Charter to be 'null and void of all validity for ever'. 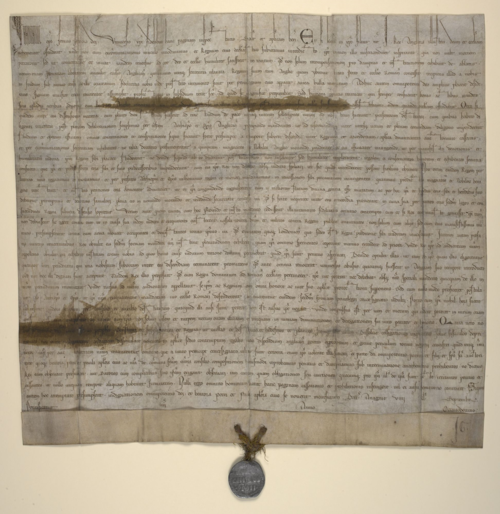 We have this unique papal bull annulling Magna Carta, issued on 24 August 1215, on display in the British Library's Magna Carta: Law, Liberty, Legacy exhibition. When taking guests around, I often joke on reaching the bull that here the show ends, despite the fact that they have 800 years of Magna Carta's legacy still to encounter. (A brief history lesson: after King John died in October 1216, with many of the barons again in rebellion and a French army having invaded England, and with a new 9-year-old king, Henry III, on the throne, a revised version of Magna Carta was issued in order to get the barons back on side, reviving the document in a single stroke.)

King John was a particularly devious ruler, and he clearly believed that, by sending messengers to his overlord, the Pope, the kingdom of England would be rid of Magna Carta. John was right, to a certain degree; but little did he realise that Magna Carta incorporated an adaptability that made it useful in many different ways to succeeding generations. I suspect in any case that both John and the barons would be horrified if they knew we were celebrating their peace treaty 800 years after that event (the terms of Magna Carta in 1215 applied only to the elite of society, the nobles and barons). Pope Innocent may have shared their opinion, but his attempt to stop the Great Charter in its tracks only had limited effect.

Magna Carta: Law, Liberty, Legacy is on at the British Library until 1 September 2015 (and entry is free for under 18s).

I am descended (allegedly) from both King John (illegitimately) and from a brother of one of the 200 Barons enforcing the situation at Runnymede in 1215, and what I say is "Shame on both the King and the Pope". History has proved that the papal annulment was invalid in the eyes of free Englishmen and as a descendant of a rebel aristocrat I am most proud and very happy that we have ultimately prevailed over king and pope to share our freedoms within the great democracies of the US and UK and beyond and I hope to celebrate Magna Carta 1215 for ever. The only horror I feel is the dumbing down of Magna Carta in the UK in 2015.

Clause 1 of Magna Carta concerned the freedom of the English Church to make its own appointments. Three parties were in contention for this prerogative: the king, the English ecclesiasts and the Pope. The issue came to a head with the appointment to Canterbury of Archbishop Stephen Langton (1207), by the insistence of Pope Innocent III (denying Canterbury's monks who wanted Reginald; and the King who had elected De Grey of Norwich). Langton then became the effective author of Magna Carta. Hence the impending loss of papal power over appointments to the English Church via Clause 1 was a major political concern for the Pope.

Meanwhile, the liberties of English people languished at Clause 39. That wasn't the priority of Magna Carta though determinist hindsight is a wonderful thing.