'The French Language Runs Throughout The World’

Today we feature a guest-post by members of the AHRC-sponsored project, Medieval Francophone Literary Culture Outside France, a partnership between King's College London, University College London and the University of Cambridge, working with the British Library. Several of the project's manuscripts are housed at the British Library, and we're pleased to say that they have been newly digitised and added to our Digitised Manuscripts site. We're delighted to be able to support research of this kind, and hope that it encourages further investigation into the origins, dissemination and uses of these fascinating texts.

‘Lengue franceise cort parmi le monde’ (‘the French language runs throughout the world’, wrote the 13th-century Venetian chronicler Martin da Canale (d. 1275) at the start of his history of Venice, which he chose to write in French. This echoes another 13th-century Italian writer, Brunetto Latini (d.1295-96), who wrote in his very popular encyclopedia, the Tresor, that French was ‘la parleure […] plus delitable et plus comune a touz languages’ (‘the most delightful and popular of all languages’). French language texts were composed and copied in many parts of Europe outside (and even a little beyond) present day France in the Middle Ages, most notably in the British Isles, Flanders and the Low Countries, the Rhineland, Italy, Catalonia, Cyprus, Greece and Palestine. Whereas traditionally this has been seen mainly as a sign of the prestige of French culture, recent research shows that the reasons for the use of French in such a diverse range of places were more complex, often pragmatic, and also that many parts of medieval Europe were profoundly multilingual. French was in fact a supralocal language in much of medieval Europe alongside Latin (and in some places where French was used alongside Greek, Hebrew and even Arabic).

This mobile use of French is nowhere more graphically illustrated than in Matthew Paris’s famous maps showing the route from England to the Holy Land, one copy of which is to be found in Royal MS 14 C VII (ff. 2r-5r). This manuscript was made in the 1250s, almost certainly at St Albans. The language used for the text of these maps is French (with just a bit of Latin). Thus on ff. 4v-5r we see a map of the Holy Land, focusing on the City of Acre (which was to fall in 1291) with explanations almost entirely in French (the flaps on f. 4v relate to Rome and Sicily, which are on f. 4r). 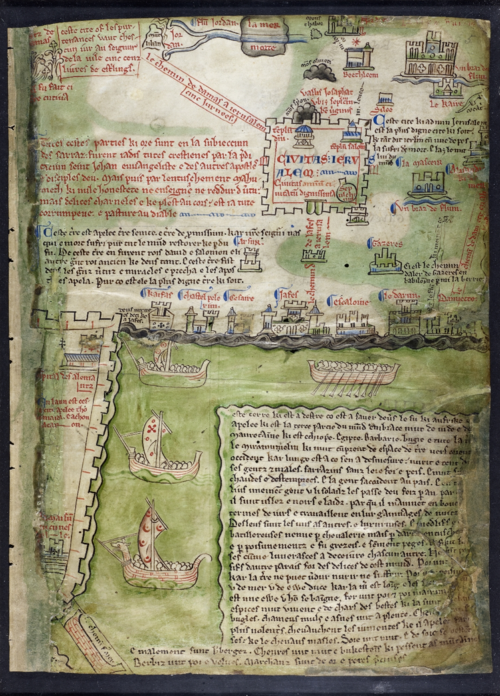 As French is also used in the descriptions of Italy, France and England, French quite literally ‘runs throughout the world’ in this manuscript.

The project Medieval Francophone Literary Culture Outside France aimed to gauge the under-researched phenomenon of the production and circulation of French language manuscripts outside France, since traditional scholarship has often focused on manuscripts that were made in France: One immediate consequence of paying more attention to French language manuscripts that were made outside France is that a rather different view of the literary canon emerges. For example, the vast Arthurian prose cycle, Guiron le Courtois, little known today compared to the other two prose Arthurian cycles the Lancelot en prose and Tristan en prose, is remarkable for its European trajectory. The oldest parts of Guiron were probably written in northern France or francophone Flanders, c. 1230-1240. About 40 manuscripts of Guiron survive, dating from the end of the 13th to the beginning of the 16th century. Direct and indirect attestations are found from Sicily to Britain and from Catalonia to Venice. Unlike Lancelot and Tristan, which were translated and re-written in all the major European languages, as far as we know parts of Guiron were only translated or re-written in Italian. Indeed the cycle had special ties with Italy. Its first attestation is probably in a letter from Frederick II's chancery in Foligno, near Perugia. The letter is dated 1240, and makes reference to 54 quires sent, or about to be sent, to Frederick from Messina after the death of one 'Johannes Romanzor'.

Some important Italian witnesses are held in the British Library collections. For example Add MS 12228 (Naples, c. 1352-1362), despite its relatively late date, goes back to an early source and transmits the Roman de Méliadus, the oldest part of the cycle, in a pre-cyclic form. It was commissioned in the context of the Ordre du Nœud, a chivalric order founded by Louis of Taranto, the Capetian and francophone King of Naples on his coronation in 1352 with a view to giving his somewhat discredited court some courtly and chivalric gloss. The hand and some of the illustration appear to be close to Paris BnF ms fr. 4274, which is a presentation copy of the Order's statutes. 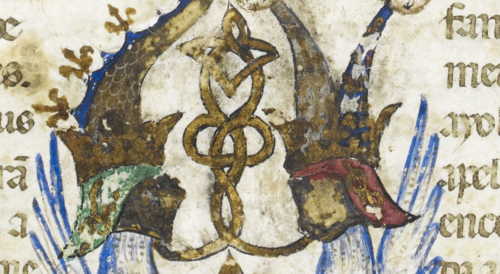 Guiron le Courtois was composed after Lancelot and Tristan as a sprawling prequel, telling the story of the older generation of knights: Méliadus de Leonois, Tristan's father; le Bon Chevalier sans Peur, father of Dinadan and Brunor le Noir; Lac, Erec's father; and so forth. It is a world without Merlin and without the Graal, muscular and misogynist, in which most of the strongest warriors belong to Guiron's family, the Bruns. They appear larger than life, incredibly strong, isolated – loners who spend their time wandering far from court. They periodically disappear below the surface of the plot, but resurface later in a complex web of intertwined stories. In Old French, Brun recalls the taboo name of the bear. The Bruns’ ancestor, Fébus le Brun, renounced the crown of France: though he was the legitimate heir, he preferred to go seek adventure in England.

In another remarkable Italian witness, Add MS 23930 (Bologna-Padua, before 1369), the beginning of the story of Fébus has a typical northern Italian frontispiece, with bright colours and large motifs, proof of the text’s status among Italian manuscript producers and readers. In several Italian copies, this episode circulated independently from the main narrative, was successful, and underwent many adaptations. 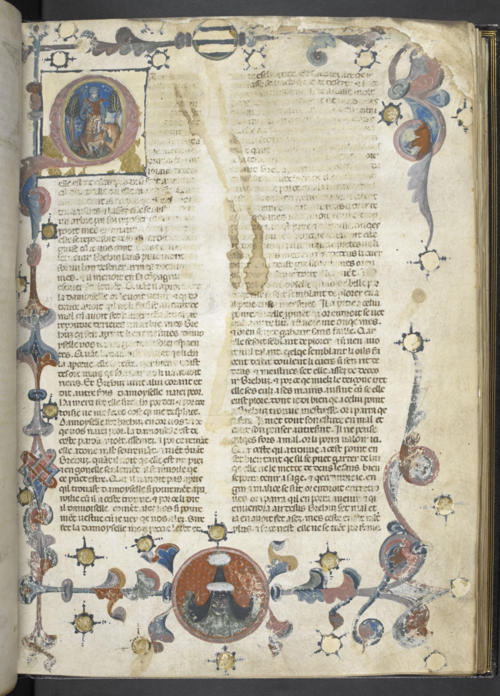 Frontispiece marking the beginning of the narrative sequence telling the adventures of Fébus le Brun in the Roman de Guiron, with the coat of arms of Guido Gonzaga (d. 1369). Add MS 23930, f. 27r, Italy, Bologna-Padua, before 1369

Add MS 23930 once belonged to the Gonzaga family: the coat of arms on f. 1r and f. 27r are identical for instance to those at f. 2r of Venice, Biblioteca Marciana, MS fr. Z. XVIII, another of our project manuscripts, transmitting the Roman de Troie. Both manuscripts are part of a rich group of medium sized manuscripts, copied in a southern Textualis, some of which are wonderfully illustrated in the bas de page, that circulated in northern Italian courts – where Guiron was appreciated well into the 16th century. 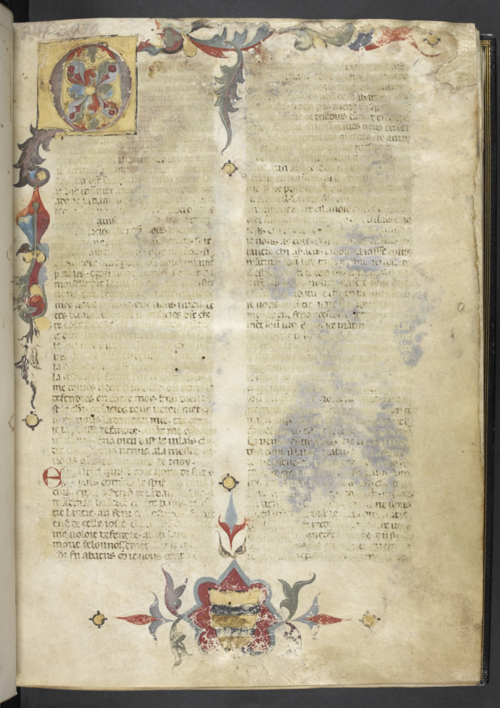