Written c. 1208 – 1213 for Roger, chastellan of Lille in Flanders, the Histoire ancienne jusqu’à César recounts world history from Creation up to Caesar’s conquest of France. Although its author initially intended to continue his story up to 13th century Flanders, the project was prematurely abandoned. Nonetheless, the Histoire ancienne is considered the first extant universal chronicle in French. Drawing on Latin and French sources, the chronicle offered an exciting digest of episodes from Genesis, the tragedies of Thebes, adventures of Greek heroes and the destruction of Troy. Additionally, the text tells the history of Rome, starting with Aeneas’ wanderings and the founding of the city, interrupted by a biography of Alexander the Great. Surviving manuscripts suggest that the Histoire gained markedly in popularity from the mid-thirteenth century, when manuscripts were produced in ateliers in Northern France (cf. below, Add MS 19669), in the Latin East (cf. below, Add MS 15268), and sometime later also in Italy. From this point onwards, the chronicle was ready to go viral. For a fuller picture see the article on the Medieval Francophone Literary Culture Outside France website.

Throughout the 14th and 15th centuries, ateliers in Paris, Flanders and the Mediterranean manufactured copies of the Histoire. In some cases, entire episodes were deleted, inserted, rearranged or replaced by different accounts. The most obvious reason for this was to produce a text that was more pleasing in its new surroundings, answering to local or more recent needs. A good example of this is Royal MS 20 D I, produced in Naples c. 1340. Firmly rooted in the Italian production of Histoire manuscripts, the Genesis and Alexander sections are cut, a much longer version of the Troy story is introduced, and the subject matter rearranged so as to provide a continuous history of Rome. 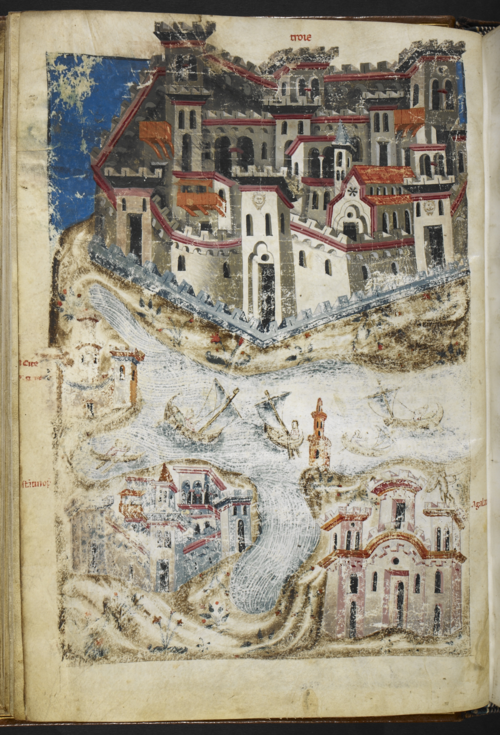 Brought to Paris sometime before 1380, where it was copied several times, this deliberate adaptation generated a new, distinct version of the text. In the following I will focus on two earlier manuscripts, kept in the British Library, both of which are characterized by their own centre of production and each with its own history.

By c. 1260, manuscripts of the Histoire had reached Acre in the Kingdom of Jerusalem. The decoration of locally manufactured copies (British Library Add MS 15268, Dijon, Bibliothèque municipale MS 562, Brussels Koninklijke Bibliotheek / Bibliothèque royale MS 10175, Paris, Bibliothèque nationale fonds français MS 20125) demonstrates the fruitful cohabitation of both Western and Islamic aesthetics with iconographic traditions from Byzantium. Elements of their illustration, for instance those images depicting Alexander’s army in the exotic Orient, may reflect the real-life experiences of the expat military elite in Acre for whom these copies were most probably produced. Add MS 15268 is no doubt the most exquisite of this group. Consider the manuscript’s frontispiece, which depicts creation in a sequence of eight medallions, reminiscent of Byzantine icon painting. The banquet scene in the upper margin has distinct oriental characteristics. 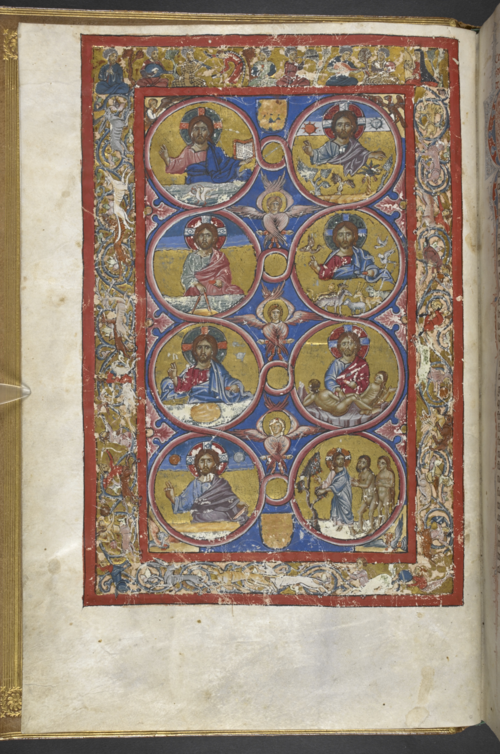 Some have surmised that this manuscript was produced as a gift for Henry II of Lusignan (1270-1324) to mark his entry into Acre in 1286, but there is no real evidence to support this. Brussels, Koninklijke Bibliotheek / Bibliothèque royale, MS 10175 can, however, be associated with the Lusignan family: in the 1430s, the husband of Isabeau Babin (probably Guy of Lusignan, illegitimate son of King Janus of Cyprus) recorded information on their children’s birth and baptism on the flyleaves. These marks also provide evidence of how, after the fall of Acre, manuscripts of the Histoire ancienne like Add MS 15268 made their way to the West, which explains why some manuscripts produced in Italy in the early 14th century show the influence of sources brought from the Crusader Kingdom.

Another four surviving codices were produced at approximately the same time miles away in Flanders or Northern France. Three of these (British Library, Add MS 19669, The Hague, Koninklijke Bibliotheek MS 74 D 47, Pommersfelden, Schloss Weissenstein - Schönbornsche Schlossbibliothek MS 295) share an illustrative programme, which demonstrates that they are intimately related. Nevertheless, none of the individual cycles is slavishly copied from another and there are variations in the scenes that were selected for illustration.

For instance, Add MS 19669 is the only manuscript to depict Achilles’ death. The miniature on folio 84r sets the Greek champion’s demise alongside Hector’s, thus intimately linking their deaths. Note that Paris’ arrows do not hit Achilles in the heel, as we might expect: the account of Achilles’ death in the Histoire differs from tradition. Here, Achilles is wounded in ‘many places’ and not, as legend has it, in the ankle, his only vulnerable spot after his mother Thetis had dipped him in the river Styx. 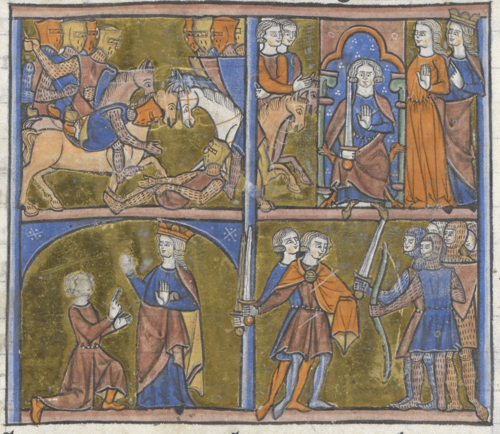 The design of the historiated initial letter at the beginning of the text is common to all four manuscripts and shows Creation in a series of seven medallions around a central mandorla. 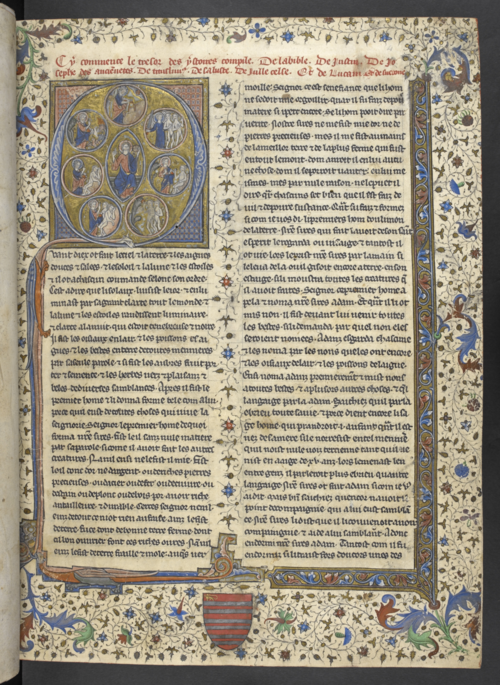 This page is also interesting because a second set of decorative borders was added in the 15th century, probably to restyle the page according to contemporary decorative trends. A later owner may have judged that some modern accents could give this vintage codex a new lease of life. This manuscript fashionista should probably be identified as Jean d’Averton, given the coats of arms that were inserted on several folios and the ex-libris: 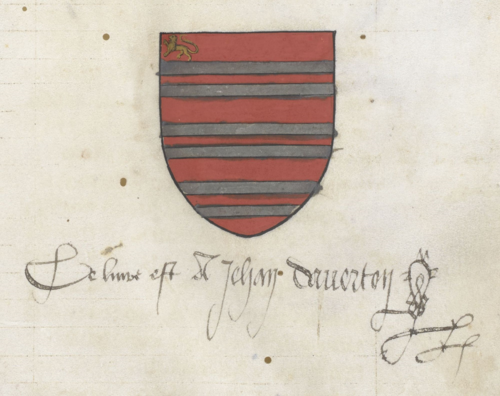 The updating of Add MS 19669 for a more modern readership is by no means unique. In the late 15th or early 16th century, the Brussels manuscript was fitted with a modern table of contents and a new frontispiece. While the table is written in a modern littera hybrida, the text on the illustrated page is a more old-fashioned littera textualis, chosen no doubt to harmonise better with the script used in the following, 13th-century text. The added folios may have replaced damaged or lost ones, but this is not the only plausible explanation. They bring a touch of contemporary style and again added heraldry provides a means of identification. The coat of arms inserted in the lower margin of f. 20r is that of the Du Périer family, which suggests that by the end of the 15th century, the Brussels manuscript had travelled from Cyprus to the South of France.

These books demonstrate the mobile and agile nature of medieval vernacular texts and manuscripts. Not only do they break down the idea of one clear-cut and ‘fixed’ text, they show that each new manuscript, be it through its material realisation, through editorial interventions or a combination of both, had the potential to be a radical remake. Moreover, this potential did not necessarily end with the delivery of the finished manuscript: throughout its existence, new situations, readers and owners could endow a manuscript with renewed relevance. A full list of Histoire ancienne manuscripts may be accessed through the Medieval Francophone Literary Cultures Outside France database.