Erasmus Manuscript Saved for the Nation

We are delighted to announce that the British Library has acquired a unique manuscript containing the earliest known translation into English of any work by the great humanist scholar and reformer, Desiderius Erasmus (d. 1536). This volume, which had been the subject of a temporary export bar, is also the only known manuscript of a contemporary English translation of Erasmus’s most popular work, the Enchiridion militis Christiani, or ‘Handbook of the Christian soldier’. 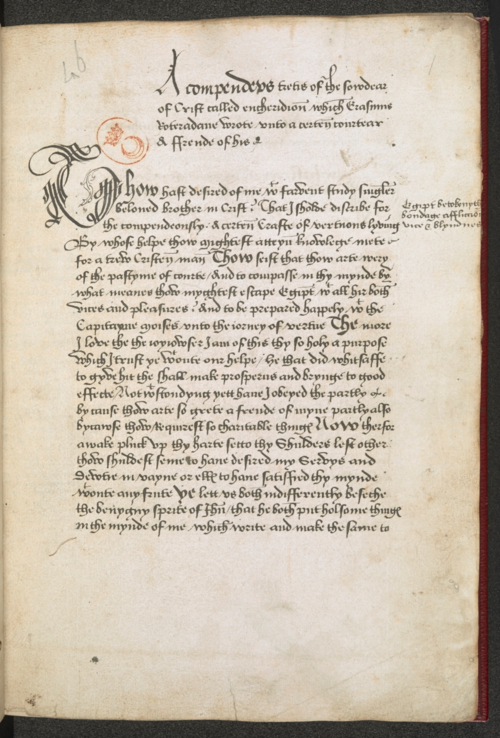 Erasmus is perhaps best known today for his satire The Praise of Folly, which he wrote to amuse Thomas More (d. 1535), and for his translation of the New Testament from Greek; but the Enchiridion was Erasmus’s first summing up of the guiding principles of his religious life, setting out his vision of a purified, Christ-centred faith based on essential points of doctrine. As a compendium of humanistic piety, it endorsed the lay vocation to holiness in the Christian life. Erasmus’s revolutionary concept, given its first and definitive expression in the Enchiridion, was his elevation of the educated laity as the potential source of new life in a Church and society fallen into decay. The Enchiridion evoked widespread interest throughout Europe and became one of the most influential devotional texts of the early 16th century. Between 1501, when Erasmus wrote the Enchiridion, and 1536 when he died, the original Latin text appeared in more than 50 printed editions. Between 1533 and 1545 there were 13 editions in English, the first being published by Wynkyn de Worde for John Bydell in London. The large number of English printed editions of the Enchiridion demonstrates the importance of its influence in pre-Reformation England.

Dated 1523, the manuscript was written ten years before the English translation of the Enchiridion first appeared in print in 1533. Two contemporary accounts testify that the religious reformer William Tyndale (d. 1536) translated the Enchiridion into English in 1522 or 1523. To date, there has been no secure evidence that Tyndale’s translation survived but its relationship to the text of the English translation, printed by Wynkyn de Worde in 1533, has long been a matter of scholarly debate. The proximity of the date of the Northumberland manuscript to Tyndale’s putative Enchiridion now tantalisingly suggests a potential identification with his ‘lost’ translation. 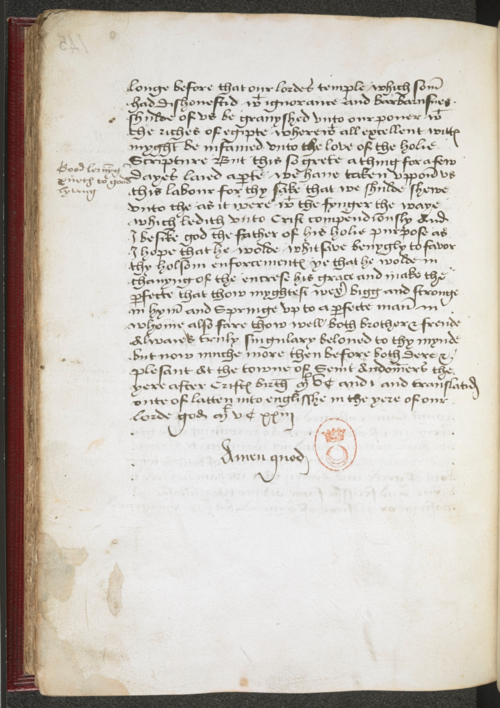 The manuscript has been in the Duke of Northumberland’s collection at Alnwick Castle since at least 1872 and its significance was only realised when it was put up for sale last summer. Initially sold to an overseas buyer, a temporary export bar was placed on the manuscript by the Reviewing Committee on the Export of Works of Art and Objects of Cultural Interest, on the grounds that it is of outstanding significance for the study of cultural movements towards the Reformation in England, the earliest known translation of Erasmus into English, and of significance for the study of scholastic links between Erasmus and Tyndale. The acquisition of the Erasmus manuscript by the British Library has been made possible thanks to the generous grants from the National Heritage Memorial Fund, the Friends of the British Library, the Friends of the National Libraries, and an anonymous donor.

The news of the British Library’s acquisition of the manuscript has been welcomed by Alec Ryrie, Professor of the History of Christianity at the University of Durham: ‘This manuscript, which seems very likely to be the work of William Tyndale, is one of the most significant new archival discoveries relating to the history of the English Bible and the English Reformation to have been made during my lifetime. Long given up for lost, this brings us closer to the work of a man who was not only one of the heroes of the Reformation but also the single most influential figure in the formation of the modern English language. It's a genuine national treasure, and the British Library is to be congratulated on a stellar new acquisition.’

Dr Claire Breay, Head of Ancient, Medieval and Early Modern Manuscripts at the British Library said, ‘I am thrilled that the British Library has secured this very significant manuscript for the national collection. As well as being available to researchers in the Manuscripts Reading Room at the Library, the manuscript has been digitised and is now available to everyone in full online.’