The Destruction of Jerusalem

This is the second in a series of posts featuring manuscripts from Ward’s Catalogue of Romances in the British Museum (until the 1970s the British Library was not a separate institution and the Department of Manuscripts formed part of the British Museum).* The first article, on the legends of Greek origin, touched on the Troy and Alexander romances and focused on the lesser-known Apollonius of Tyre.

The next section in Ward’s catalogue, ANCIENT HISTORY, describes the manuscripts of Titus and Vespasian or the Destruction of Jerusalem, a tale that has its origins in both Roman and Biblical history. Ward tells us that an older version of the text exists in Latin, but the manuscripts he describes in our collections are in French and English. 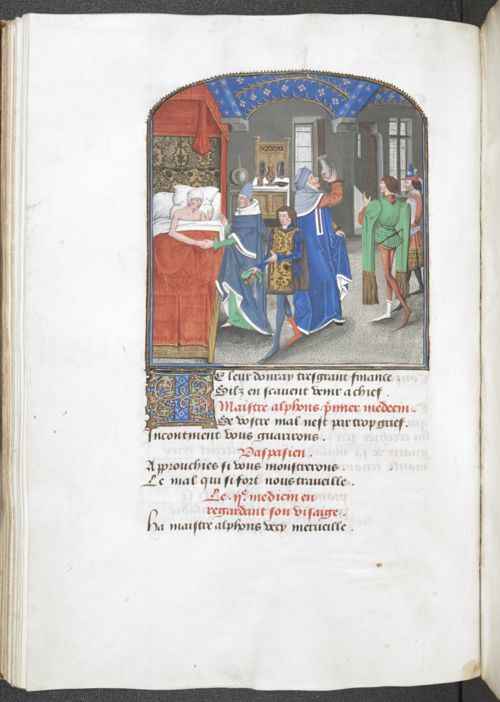 The French chanson de geste tells of the Emperor Vespasian, struck down with leprosy, sending his seneschal Gaius to Jerusalem to find out if the great prophet, Jesus, can help him. Gaius returns with the news of Christ’s crucifixion, but brings Veronica who has the cloth imprinted with His features.  Vespasian is cured and he and his son Titus destroy Jerusalem to revenge the death of Christ. Pontius Pilate, who is held responsible, is sent to prison in France, at Vienne, where the earth opens and he is taken down into hell.

Titus and Vespasian is one of the texts in Additional MS 10289, a late-13th century volume of French verse from Mont Saint-Michel, previously featured in this blogpost. An impressive puzzle initial marks the beginning of the opening line. The chanson is divided into irregular sections or verses of between 16 and 24 lines, for which Ward uses the quaintly archaic French term ‘tirades’, each marked by a decorated initial in red or blue. In the second tirade, the 4th line sums up the attack on Jerusalem as, ‘Ainz est la veniance au fiz sainte marie’ ('such is the vengeance for the son of St Mary’). 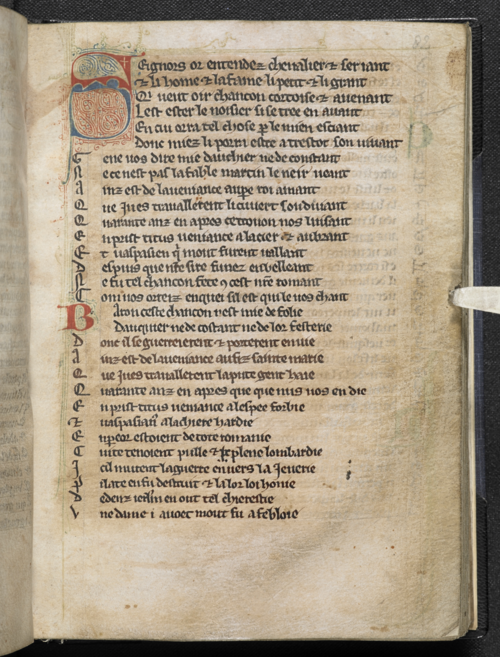 Having described Pilate’s torments and sticky end, the chanson ends with a moral for all:

('The purpose of this tale is clear: be very afraid if you go astray, because the powerful King of Glory will wreak vengeance and it is not possible to win against such a powerful adversary.') 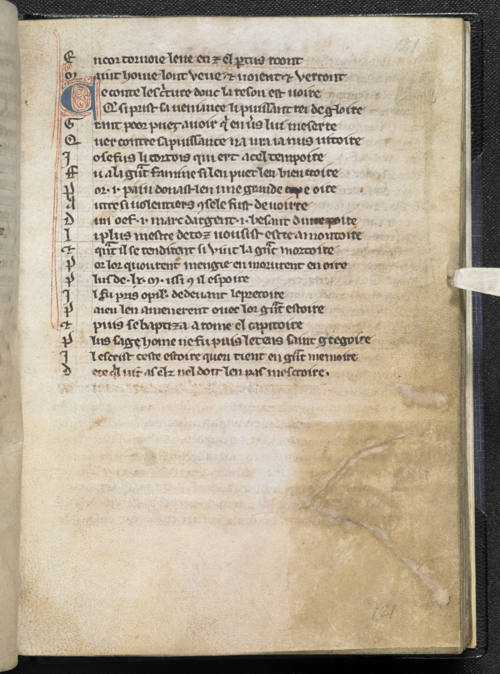 English versions of Titus and Vespasian in alliterative verse were popular in the 15th century, and Ward lists four manuscripts in our collections.

The full version of the English poem is in 7 parts, each called a ‘Passus’, and this collection of verse contains most of it, though part of Passus II, with the legend of Veronica and the holy shroud is missing. A marvellous detail that does not appear to have been in the French chanson is the strange affliction of wasps in his head that Vespasian suffers, in addition to leprosy. The poem describes the afflictions of Titus and his father Vespasian with some relish:

His lipppe lay on a lompe. Lyvored on his cheke

Hyved up in his hedde he hadde hem of thoghte 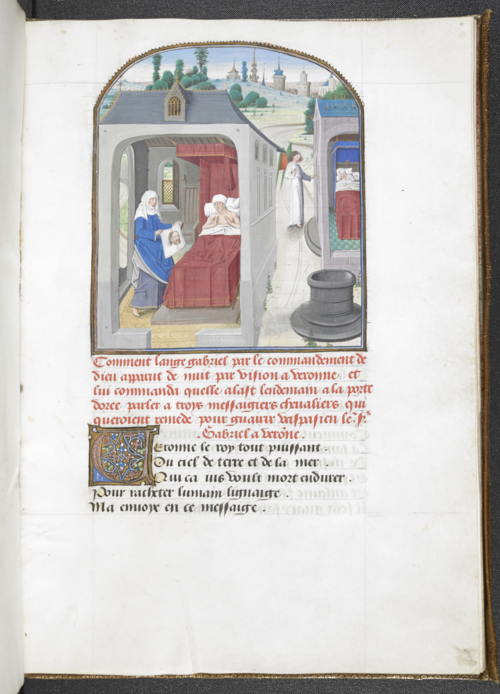 The angel Uriel appearing to Veronica in her sleep, bidding her to go to Spain to see Vespasian (in the background); in the foreground, Veronica showing Vespasian the Holy Veil, upon which Christ's face is imprinted, and he is cured instantaneously, Southern Netherlands (Bruges), c 1465, Le Mystère de la Vengeance de Nostre Seigneur Ihesu Crist, Additional MS 89066/1, f. 111r

The English version largely follows the French chanson, apart from an account of Nathan the seafarer ‘out of surry’ (from Syria), who is shipwrecked in Rome and tells Titus of the existence of Jesus Christ. (According to Ward, this episode was translated from the original Latin work into the Anglo Saxon legend of St Veronica and entered the English tradition from there.) 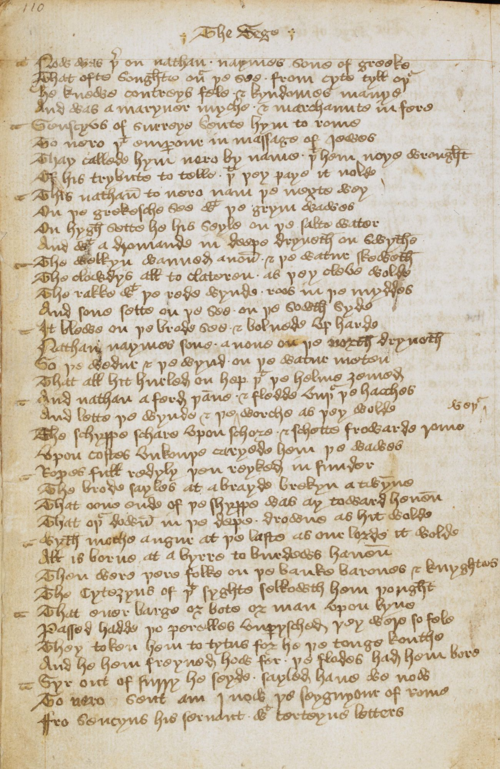 Page from ‘The Sege of Ierusalem’ containing the episode of Nathan and Titus,  England, 2nd half of the 15th century, Cotton MS Caligula A II, f. 111v

This compilation of historical and scientific texts, bound with an unrelated cartulary from Lincoln Cathedral, includes lines from Passus VI and VII of  the ‘Destructio Jerusalem per Vaspasianum et Titum’, as it is described in the colophon. It begins with Vespasian besieging Jerusalem. Messengers arrive from Rome to tell him that he has been elected emperor. The end describes how Titus and his army, having destroyed Jerusalem and condemned Pilate to ‘pyne for evere’ in prison, ‘Wentenn singyng away’ with the treasure they had won, satisfied that they had done the Lord’s work ! 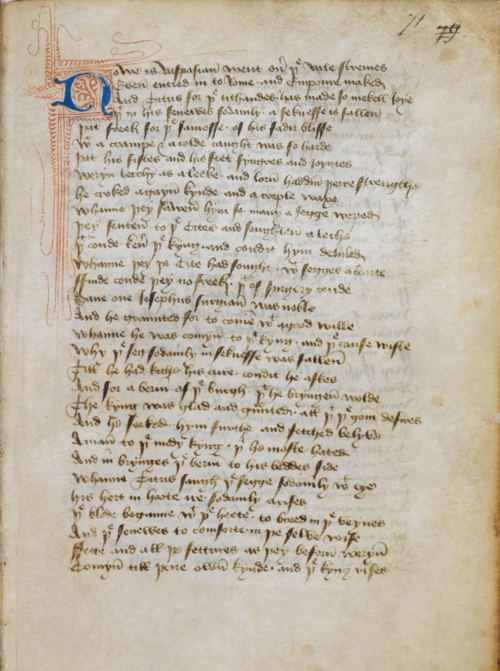 Vespasian is made Emperor and falls ill in Rome in this passage from the ‘Destructio Jerusalem’,  England, mid-15th century, Cotton MS Vespasian E XVI, f. 71r

This manuscript also has a Lincoln connection as it is in a collection of English poems compiled by Robert Thornton, the scribe of the ‘Thornton Romances’ in Lincoln Cathedral Library. It is in the Appendix of Ward’s Catalogue, volume 1 as it was acquired by the British Museum just as he was compiling the work. He traces the ‘absurd story of the wasps in the nose of Vespasian’ to a Rabbinical source whereby Titus, when drinking wine after destroying Jerusalem, was attacked by a fly that flew up his nose and grew as large as a pigeon! The initial ‘I’ at the beginning of the text is perhaps a representation of the two afflicted emperors, with a creature emerging from their heads. 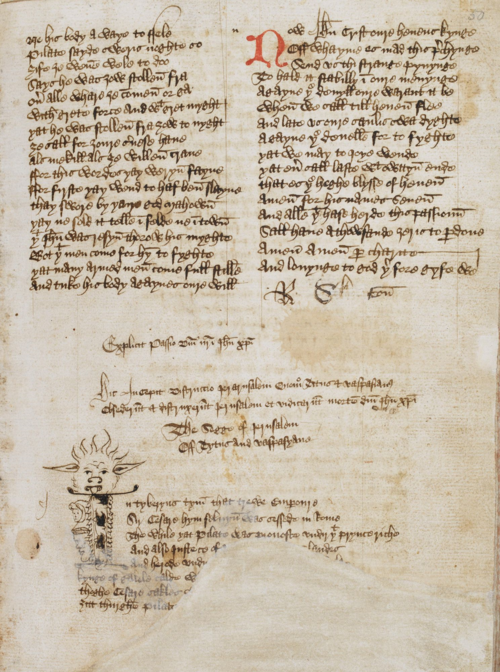 Initial ‘I’(n Tyberius tyme) with a monster head on top and two human heads in profile at the beginning of the first line of the poem, with the title ‘The Segge of Jerusalem / Of Tytus and Vespasian’, England, N. ( Lincoln), c. 1450, Additional MS 31042, f. 50r

This version of the poem begins a collection of devotional texts from the early 15th century in a Warwickshire dialect. In this version, Pilate is shut up in a ‘barel of stele’ and sent to ‘Viene’, only to be carried off by devils. The authority for the story is given at the end, being ‘Josephus, þe good clerke [who] … sawe þe vengeaunce smyte’ and the author assures us that the protagonists ‘mede hevene ryche blis’.

Ward does not list Harley 4733, another miscellany of English verse. Two other English manuscripts, Additional MSS 36523 and 36983 were acquired after Ward’s Catalogue was published.

A final scene from the Marcadé manuscripts: 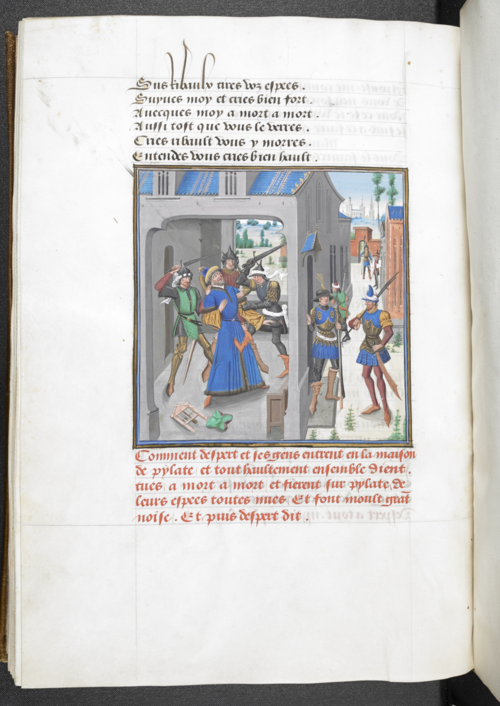 Lucy Freeman Sandler, Emerita Professor of Art History at New York University, whom we are delighted to count among the readers of our blog, has suggested that we include the following images of the Siege of Jerusalem with captions in Anglo-Norman French, from the 14th-century ‘Neville of Hornby Book of Hours’ (Egerton MS 2781). 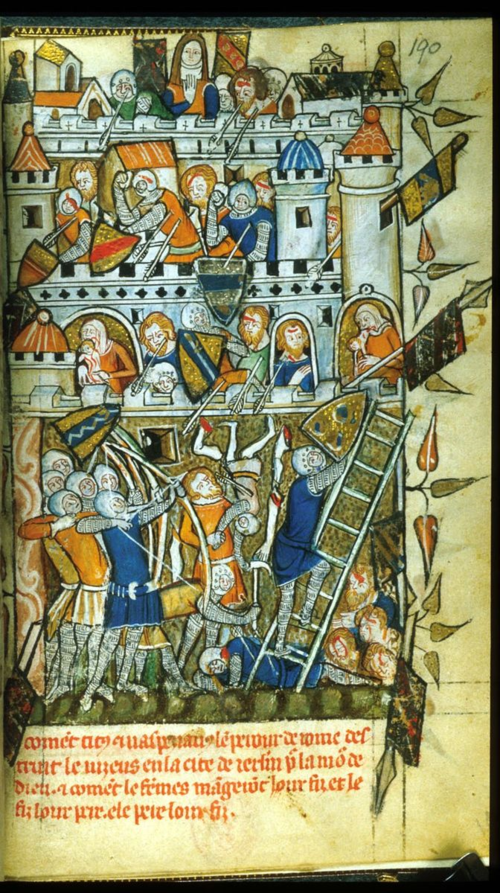 Miniature of the siege of Jerusalem by Titus, with archers shooting arrows at people on the ramparts, England, S. E. (London?) 2nd quarter of the 14th century, the Neville of Hornby Book of Hours’, Egerton MS 2781, f. 190r 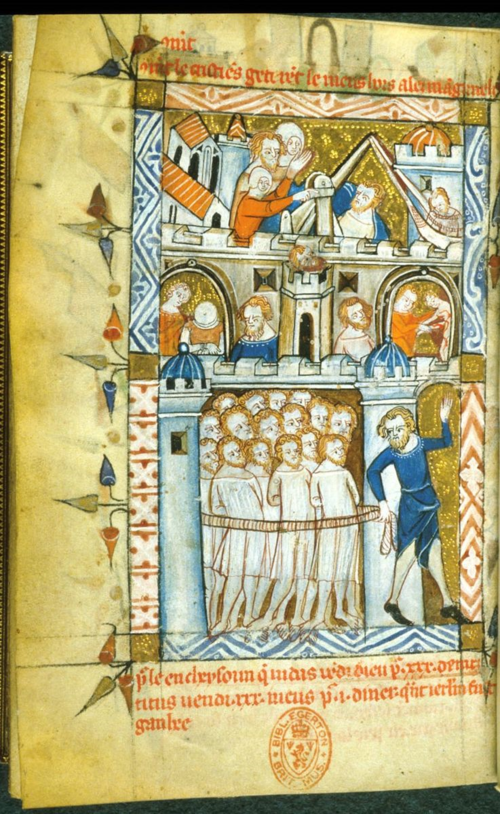 Miniature of the siege of Jerusalem by Titus, with an infant speared, and men encircled by a rope, England, S. E. (London?) 2nd quarter of the 14th century, the Neville of Hornby Book of Hours’, Egerton MS 2781, f. 190v

Thank you, Lucy, for your input.