A Kestrel for a Knave

Set in a coal-mining community in northern England, Ken Loach’s film Kes (1969) portrays the solace a young boy finds when nurturing a kestrel. The film is based on A Kestrel for a Knave (1968), a novel by Barry Hines currently on display in the British Library’s free exhibition Animal Tales. This 20th-century tale of social realism may seem out of place in a blog post about medieval manuscripts. However, it has an unexpected connection to an item in the British Library’s Harley collection and provides the perfect opportunity to explore one of the most frequently written about and depicted human-animal interactions in medieval books. 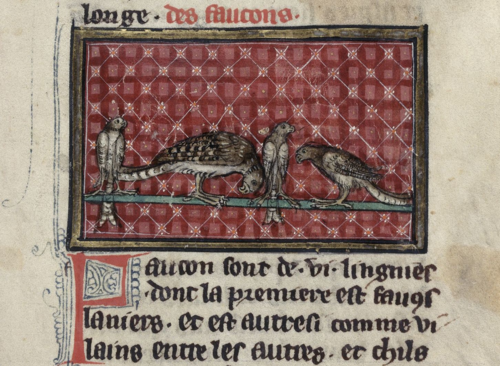 In the preface of A Kestrel for a Knave, Hines alludes to the source of his title:

“An Eagle for an Emperor, a Gyrfalcon for a King; a Peregrine for a Prince, a Saker for a Knight, a Merlin for a Lady; a Goshawk for a Yeoman, a Sparrowhawk for a Priest, a Musket for a Holy water Clerk, a Kestrel for a Knave.”

The manuscript mentioned is Harley MS 2340, a 15th-century collection of treatises on hawking. It is one of a number of English hunting and hawking manuals created during this period. For an intriguing illuminated example, check out this blog post on the Kerdeston Hawking Book.

The first item in Harley MS 2340 is The Booke of Hawkyng after Prince Edwarde Kyng of Englande (ff. 1r-22v), which includes such useful information as treatments ‘ffor the hawke that hath lost his corage and luste’ (f. 12r). This text was also incorporated into the hawking section of The Boke of St. Albans (1486), the first source mentioned by Hines, which is the earliest printed English treatise on hawking and hunting. 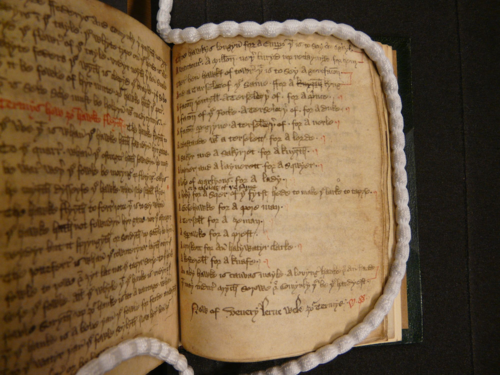 The hierarchy of owners and hawks from a collection of treatises on hawking, England, 1st half of the 15th century, Harley MS 2340, f. 50r

The hierarchy of owners and hawks modernised by Hines is largely the same in both Harley MS 2340 (f. 50r) and the printed Boke of St. Albans (Hands (ed.), ll. 1164-1203). However, the famous line ‘a Kestrel for a Knave’ is only found in the Harley manuscript (‘A kesterell for a knafe’ (f. 50r)), despite The Boke of St. Albans being widely cited as the source of the title. 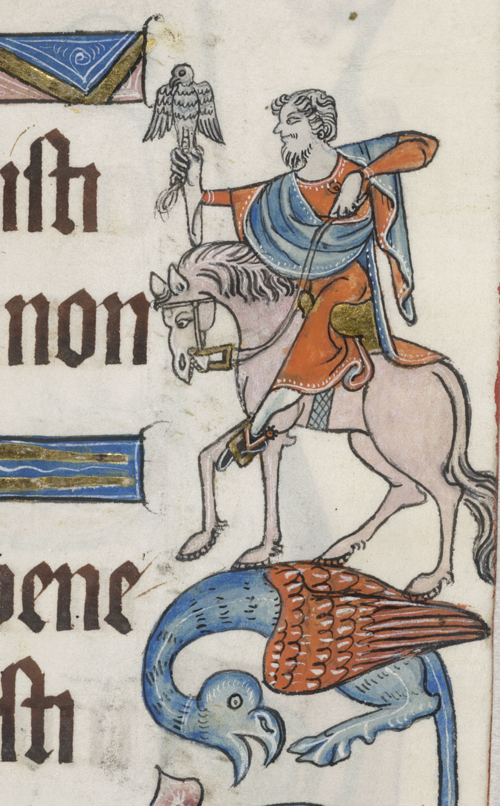 It is unlikely that the hierarchies in the printed book and the Harley manuscript represent actual medieval practices. Indeed, specific types of bird were selected according to the nature of the prey or the location of the hunt. The two principal categories of bird, hawks and falcons, manifest different ways of attacking prey. Whereas falcons dive from a height and are better suited to hunting in open countryside, hawks swoop on their prey from a lower altitude, making them also suitable for woodland hunts.

The hierarchy of birds and owner does, however, make clear how hunting with birds was a socially-coded activity. The circumstances surrounding this form of venery distinguished the rich and powerful from the lowly knave. What game keepers did to make a living, the aristocracy enjoyed as sport. 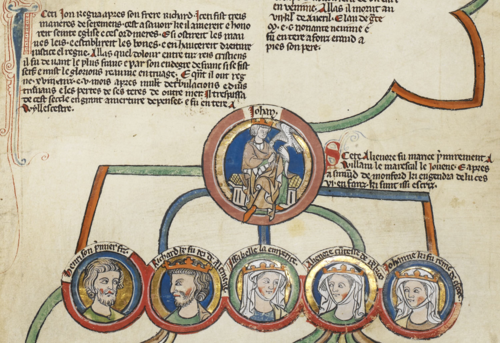 The equation of falconry with nobility is frequently found in manuscript illumination. Aristocratic figures were often portrayed holding hawks as a sign of their status, even the ignominious King John. The time and wealth required to train and keep these often very valuable birds was substantial. As Robin S. Oggins sums up, hawking was ‘an almost perfect example of conspicuous consumption: it was expensive, time-consuming, and useless’ (The Kings and Their Hawks, p. 111). 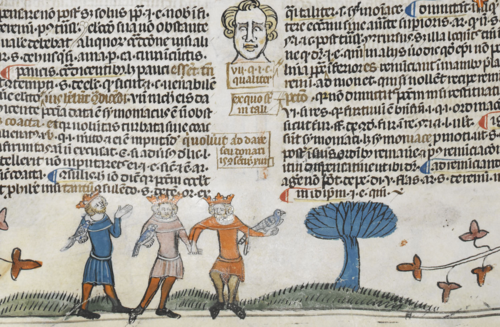 Participation in hawking as a leisure activity increased by the 15th century, and so too did the ways of marking social superiority. It not only counted how one hunted, but also how one spoke about it. For example, after the hierarchy in Harley MS 2340, we find a list of the collective nouns for different types of bird, a terminology that distinguished the elite from the uneducated.

In addition to high social status, falconry was also associated with youth, as seen in this roundel from the Ten Ages of Man. 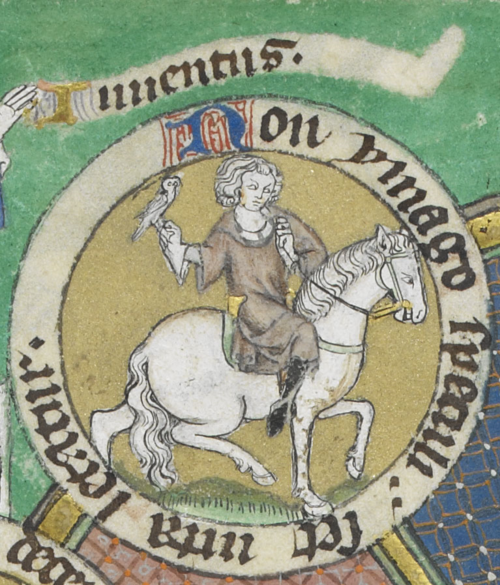 Detail of a roundel from the section on Youth from the Wheel of the Ten Ages of Man, in the De Lisle Psalter, Arundel MS 83, f. 126v

Hunting with birds was also an activity open to women. Two of our most famous illuminated manuscripts, the Taymouth Hours  and the Smithfield Decretals, both feature multiple scenes of ladies using hawks to hunt for hares and ducks. 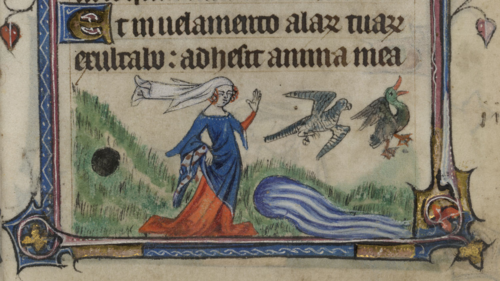 Detail of a bas-de-page scene of a lady observing her hawk fly towards a duck, from the 'Taymouth Hours', England (London?), 2nd quarter of the 14th century, Yates Thompson MS 13, f. 73r 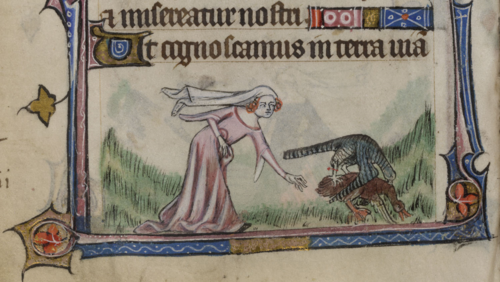 Detail of a bas-de-page scene of a lady observing her hawk bringing down a duck, Yates Thompson MS 13, f. 73v 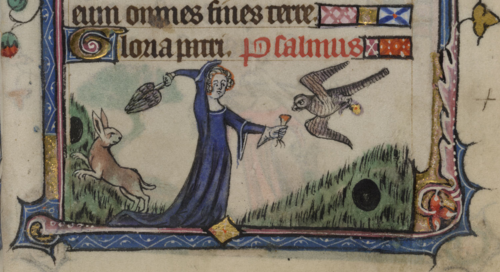 Detail of a bas-de-page scene of a lady hawking for a hare, Yates Thompson MS 13, f. 74r 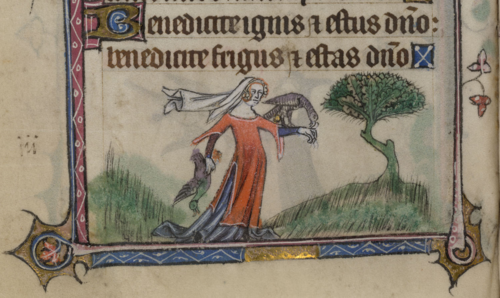 Detail of a bas-de-page scene of a lady holding her hawk and a dead duck, Yates Thompson MS 13, f. 74v 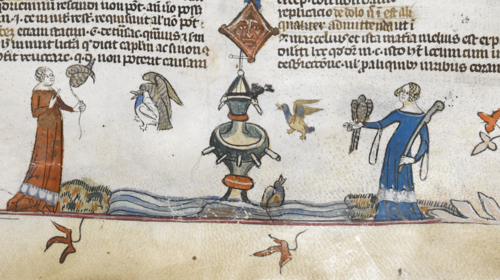 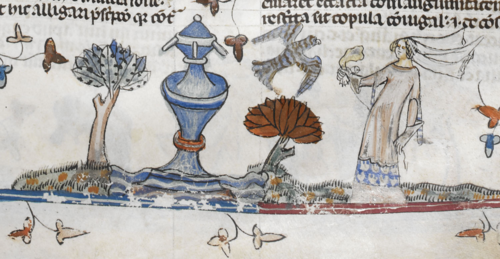 Venery and courtship were often connected in medieval literature and art. As well as the sexual connotations of the hunt, birds of prey represented the ultimate luxury accessory for the courtly lover. 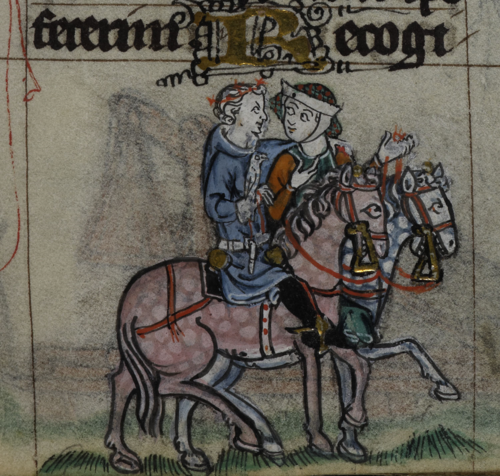 Images of lovers hawking also often accompany the month of May in calendars at the beginning of books of hours, such as the manuscript from our recent caption competition and the Huth Hours discussed in this blog post. 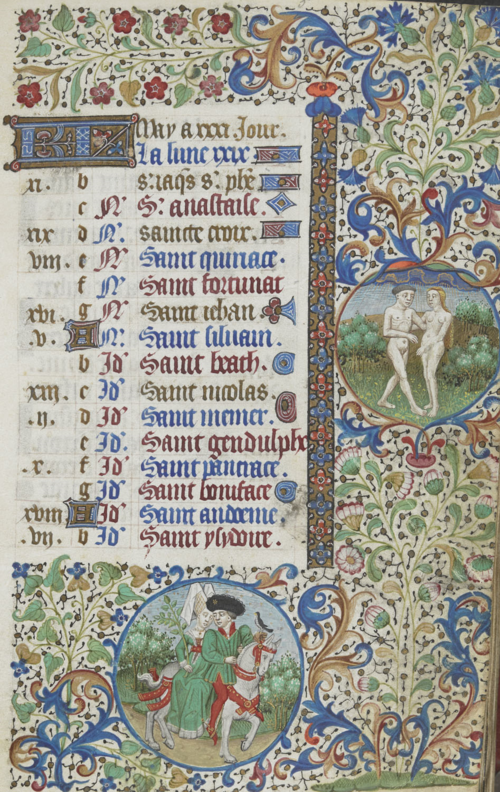 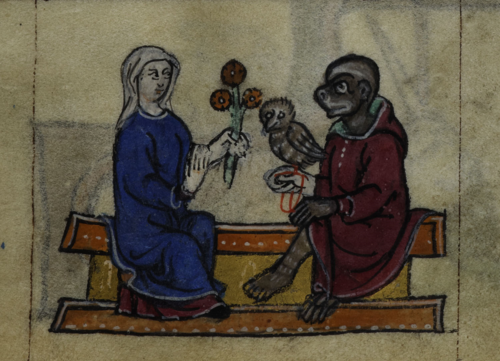 Detail of a bas-de-page scene of a courting monkey holding an owl, Stowe MS 17, f. 62r

In other examples, parodic monkey falconers are depicted riding goats instead of horses. This fellow looks like he's having a hoot! 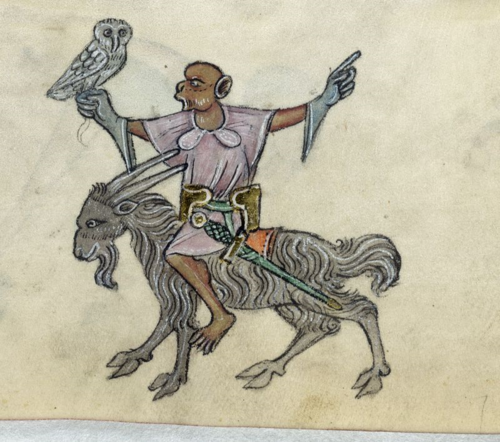 You have until 1 November 2015 to explore the fascinating books (and sounds) on display in the British Library’s free Animal Tales exhibition.