A Calendar Page for November 2015 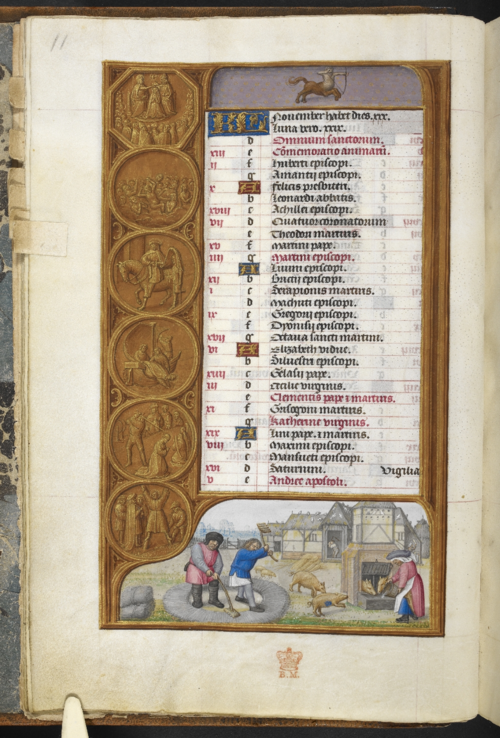 In November, the threshing and winnowing is taking place: in the background, a male figure wields a flail, beating wheat to separate the grains from the husks.  Two peasants in the foreground are beating flax to break down the stem fibres, while a woman to the right in the background is using a stick known as a 'swingle' to 'scutch' or dress the flax.  A woman is pouring swill out for the pigs, while doves and pigeons gather in the dovecote and on the thatched roofs of the barns waiting to feed on any loose grains. This month, marked by the Zodiac symbol of the centaur for Sagittarius, saw the celebration of several important festivals in the Christian calendar, each illustrated in the roundels to the left: All Souls’ Day, the Commemoration of Souls in Purgatory, St Martin of Tours (shown mounted on a horse, cleaving his cloak in two and giving half to a beggar), and the deaths of St Clement, Pope and Martyr (shown being thrown into the Black Sea with an anchor tied around his neck, as punishment for converting local pagans), St Catherine (shown being beheaded, her wheel in the background) and St Andrew (shown being crucified on the saltire). 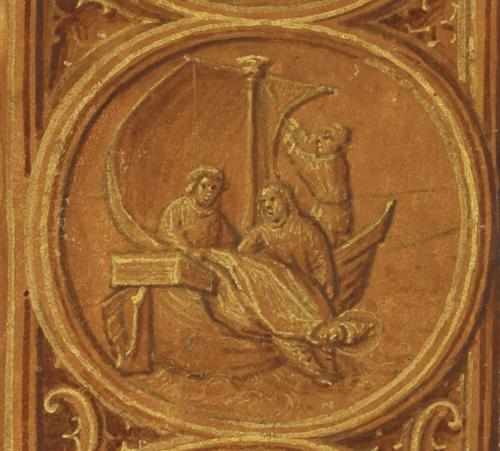 Is the activity in the foreground threshing grain or preparing flax? The Morgan Library has a very similar calendar page labeled as preparing flax for linen http://www.themorgan.org/collection/medieval-and-renaissance/manuscript/msm399f12v-13#

You're quite right, julieann252: they are beating flax to break down the stem fibres, while a woman to the right in the background is using a swingle to scutch the flax. Thank you for pointing this out - we've corrected the catalogue entry too. (There's also a man in the background using a flail to separate grains of wheat from the husks).