The Prophecy of the Tenth Sibyl, a medieval best-seller, surviving in over 100 manuscripts from the 11th to the 16th century, predicts, among other things, the reign of evil despots, the return of the Antichrist and the sun turning to blood.

This, and our earlier two posts on Ward’s Catalogue of Romances in the Department of Manuscripts, focus on the tales that Ward classified as ‘CLASSICAL ROMANCES’. He lists 11 manuscripts of the Sibyl’s prophecy in our collections, but there are 15 in all. 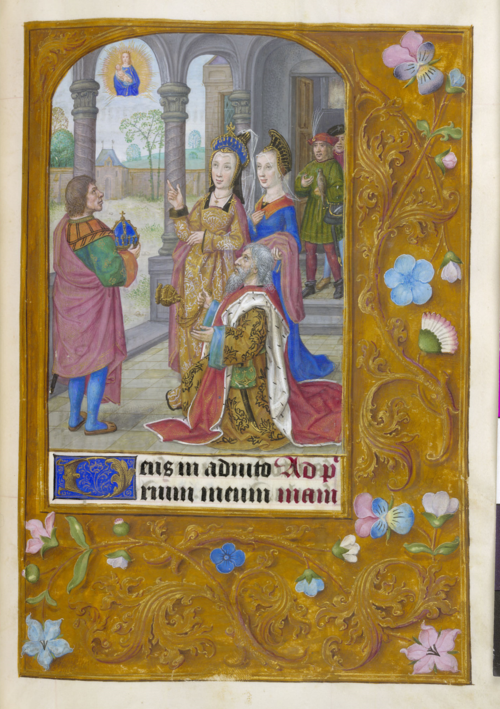 The Tenth or Tiburtine Sibyl was a pagan prophetess perhaps of Etruscan origin. To quote Lactantus in his general account of the ten sibyls in the introduction, ‘The Tiburtine Sibyl, by name Albunea, is worshiped at Tibur as a goddess, near the banks of the Anio in which stream her image is said to have been found, holding a book in her hand’. (Tibur is the modern Tivoli: at the Villa d'Este, built in the 16th century, murals depict her prophesying the birth of Christ to the classical world.)

The work interprets the Sibyl’s dream in which she foresees the downfall and apocalyptic end of the world; 9 suns appear in the sky, each one more ugly and bloodstained than the last, representing the 9 generations of mankind and ending with Judgment Day. The original Greek version dates from the end of the 4th century and the earliest surviving manuscript in Latin is dated 1047 (Madrid, Escorial ms &.1.3). There are a small number of vernacular manuscripts, including an Anglo-Norman version by Philippe de Thaon (BnF fr. 25407). The Tiburtine Sibyl is often depicted with Emperor Augustus, who asks her if he should be worshipped as a god. This image from the margins of a Dutch prayerbook is an example: 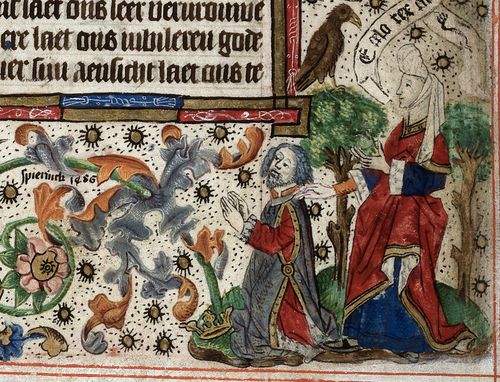 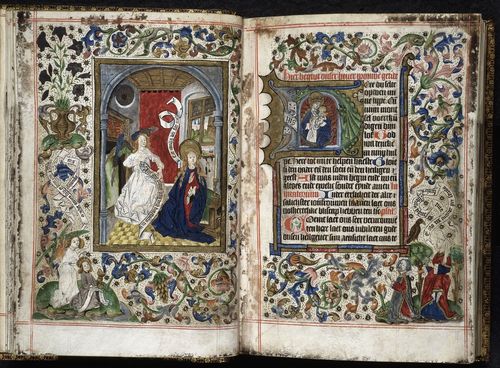 Augustus kneeling, with the Tiburtine Sibyl prophesying, in the lower right border (f. 18r); a miniature of the Annunciation; historiated initial 'H'(ere) with Virgin and Child shown as the woman of the Apocalypse; John on Patmos in the border (f. 17v), at the beginning of the Hours of the Virgin, Netherlands, N. (Haarlem? or Beverwijk?), 1486, Harley MS 2943, ff. 17v - 18r.

Early English transmission of the prophecy is often linked to the larger monastic houses such as Rochester and Canterbury, where political prophecies such as the Prophecies of Merlin were popular works. Included in the text is a list of the succession of Roman emperors, and medieval scribes added to this and inserted significant political events from their own times into the prophecy. It is a short text of 3 or 4 folios, usually found in collections of chronicles and historical material, sometimes incorporated into other historical works, including those of Godfrey of Viterbo (12th century) and Matthew Paris (13th century). The emphasis on role of the emperors and kings in the history of the world made this an ideal tool of political propaganda and this may have accounted for its popularity.

The Latin text was often attributed to Bede, and was first printed among his works in Basel in 1563, and later among the works of Pseudo-Bede in Migne’s Patrologia Latina (PL 90, 1181B-1186C).

Royal MS 15 A XXII from Rochester Cathedral Priory and Cotton MS Vespasian B XXV from Christ Church, Canterbury, for which the former was the exemplar, are the earliest manuscripts in our collections, copied in the first quarter of the 12th century. Both also contain Solinus Collectanea and Dares Phrygius Historia Troianorum: 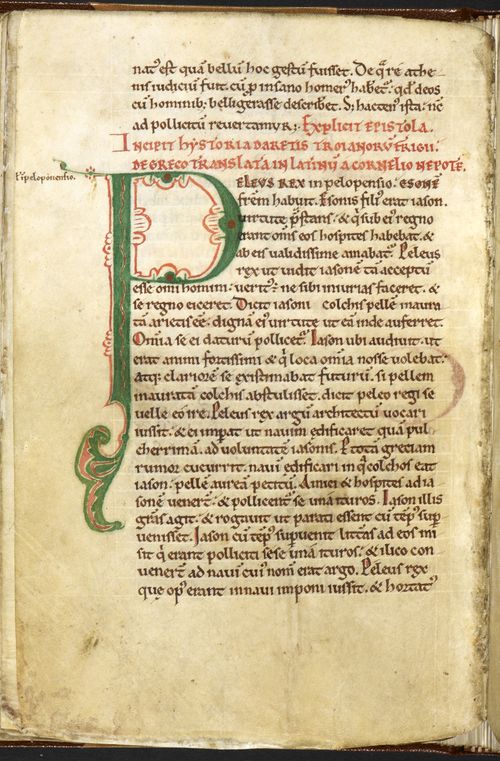 Royal MS 15 B XI (12/13C), closely related to the Royal and Cotton manuscripts above, and is again from Rochester Cathedral Priory. 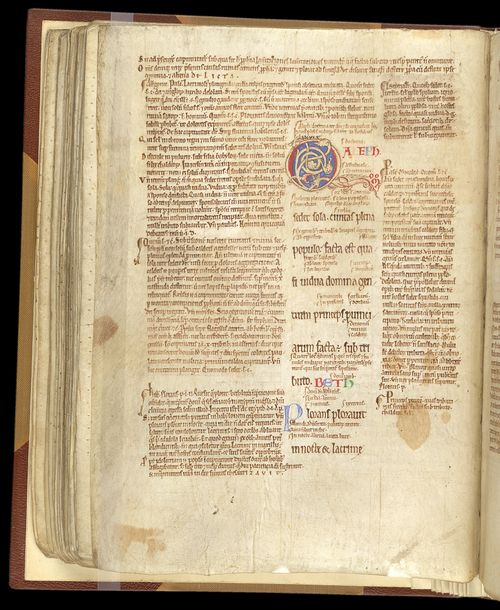 Zoomorphic initial 'Q'(uo) with outline drawing of a dragon and foliate decoration from the Lamentations of Jeremiah, which follow the Prophecy in this manuscript, England, S.E., 4th quarter of the 12th century or 1st quarter of the 13th century, Royal MS 15 B XI, f. 70v

Royal MS 13 A XIV, an Irish volume from the late 13th or early 14th century that formerly belonged to the Dominican Friary at Limerick and contains a version of the Topographia Hibernica of Giraldus Cambrensis. 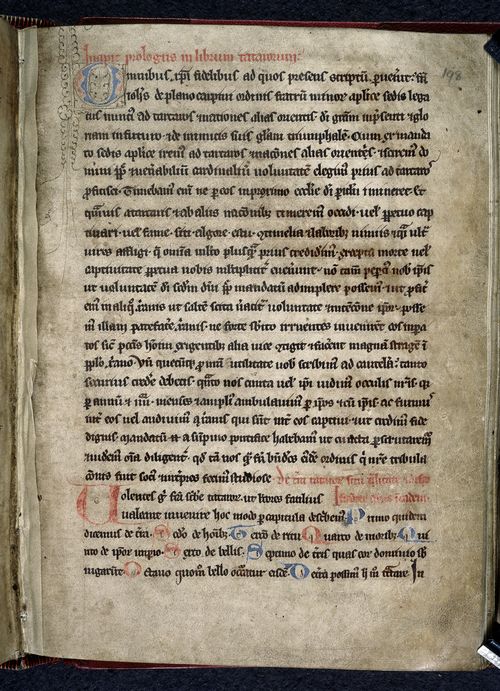 Arundel MS 326: This historical and theological miscellany includes the annals of Abingdon and the Historia Regum Britanniae and is thought to be from Abingdon Abbey. For some reason Ward describes this manuscript in a later section dealing with the English chronicles, but does not include it in the list for the present text.

Egerton MS 810, from Germany in the late 12th or early 13th century and includes Einhard’s Life of Charlemagne 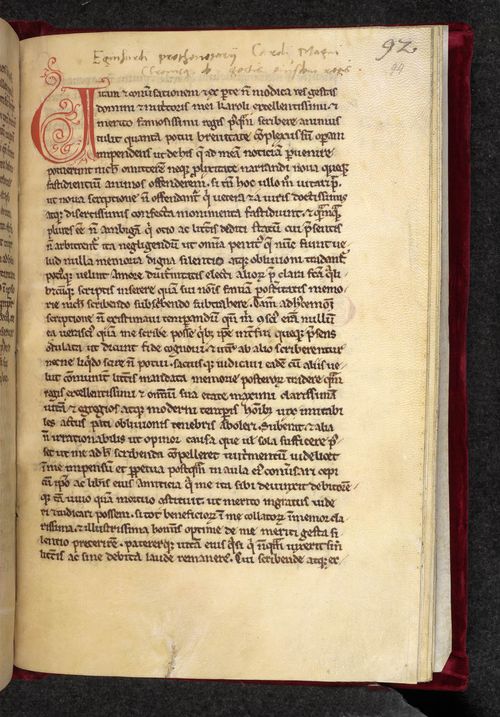 Cotton MS Titus D III, a 13th-century copy in a collection with the Pantheon of Godfrey of Viterbo and Apollonius of Tyre.

Cotton MS Claudius B VII, a 13th-century Litchfield manuscript that again includes Dares Phrygius, along with Turpin’s Chronicle and the Prophecies of Merlin.

Cotton MS Caligula A X, an early 14th century manuscript containing a Chronicle of Worcester Cathedral Priory up to 1377 and other material relating to Worcester .

Manuscripts not in Ward’s catalogue:

In her study, The Sibyl and Her Scribe, Anke Holdenried lists further copies of the text, now in the British Library, that were either not known to Ward or were acquired after his catalogue was published: 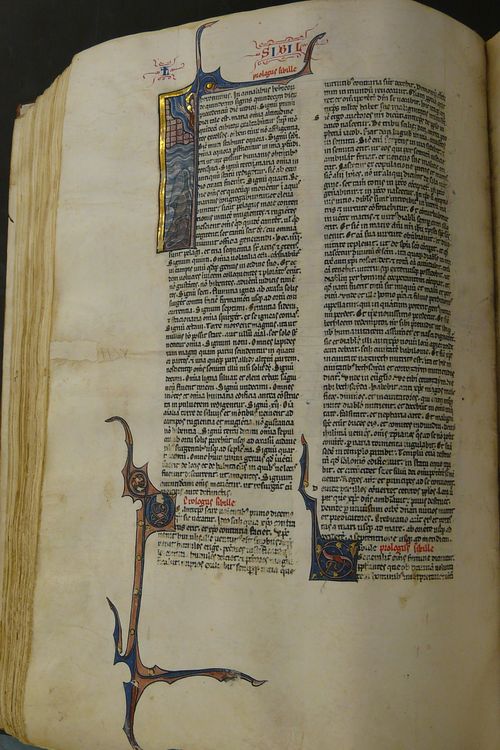 The tripartite prologue to the Prophecy of the Tenth Sibyl, with a historiated initial ‘I’(heronimus) at the beginning, from the Poncii Bible, Spain, Catalonia (Vich?), 1273, Additional MS 50003, f. 220v

This manuscript was one of seven manuscripts bequeathed to the British Museum by Charles William Dyson Perrins, collector and bibliophile (1914-1958). An illuminated Bible from Spain, copied by Johannes Poncii, canon of Vich in Catalonia in 1273, it provides one of the most fascinating contexts for the text and images of the Tiburtine Sibyl. The prophecy has been inserted into the biblical text in between the Book of Psalms and the Book of Proverbs. 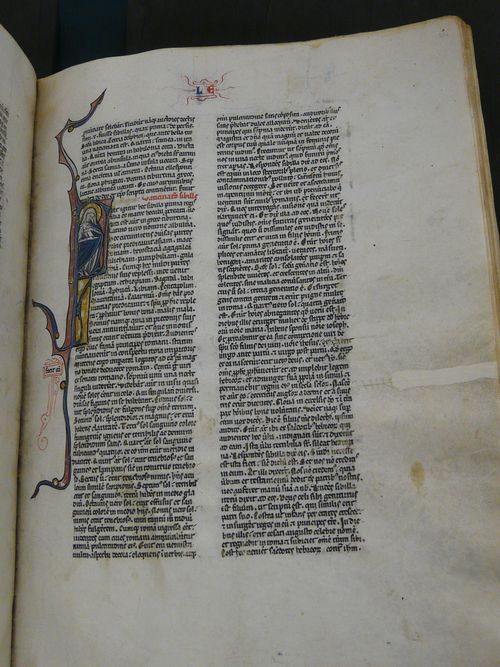 In this early 15th-century collection, including Aesop’s fables, in the hand of John Streech, canon of the Augustinian Priory of Kenilworth, Warwickshire, the prophecy follows an excerpt of Honorius Augustodunensis’ Ymago Mundi.

Other images of the Sibyl

The collections of chronicles and prophecies in which the Prophecy of the Tenth Sibyl is often found tended to be for practical use and therefore are not lavishly illustrated, but images of Tiburtina and her fellow sibyls appear in other contexts where their prophecies are alluded to.

This is an opportunity to display an image from the fabulous Harley MS 4431, produced by Christine de Pizan for Queen Isabeau of Bavaria (b. 1371, d. 1435) and illuminated by two of the leading Parisian artists of the early 15th century. Included in this collection of Christine’s works is L'Épître Othéa (The Epistle of Othea to Hector), in which the goddess teaches Hector the art of chivalry, providing examples from characters in mythology, including the Tiburtine Sibyl. 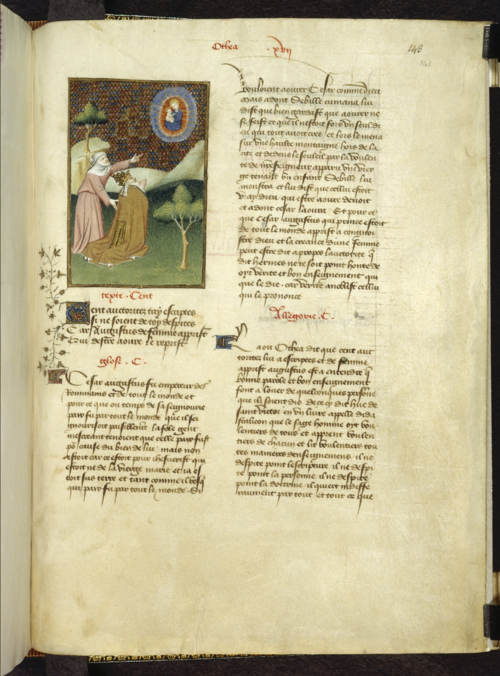 Finally, a search for ‘sibyl’ in the Catalogue of Illuminated Manuscripts gives a number of results, including this French image of the Erithrean Sibyl, who presided over the Apollonian oracle at Erythrae in Ionia. It is from a copy of a French translation of Boccaccio’s work, Le livre de femmes nobles et renomées: 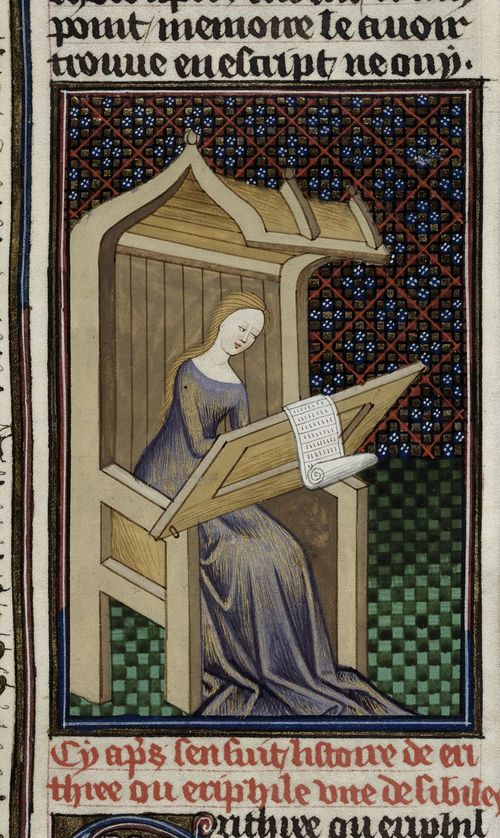 Footnote: The Tiburtine Sibyl makes an appearance in the National Gallery’s current Botticini exhibition, ‘Visions of Paradise’, which we featured in a recent post.  There is an engraving of her, attributed to Baldini, which is compared to the Sibyl represented in Botticini’s painting. The catalogue points to the distinctive headdress of the Sibyls in both images, not dissimilar from the one in our image from a Flemish Book of Hours, shown above (Harley 2943, f. 1).

Anke Holdenried, The Sibyl and Her Scribes: Manuscripts and Interpretation of the Latin ‘Sibylla Tiburtina c.1050-1500 (Aldershot: Ashgate, 2006).