Piecing Together the Puzzle of the Hungerford Hours

Cataloguing a manuscript often demands a little detective work, and even more so when the original book is no longer intact. An important 14th-century English Book of Hours has provided a particularly intriguing project of reconstitution. Produced around the year 1330, the Hungerford Hours now exists in a fragmentary form, with leaves scattered around the world in both private and public collections.

A historiated initial 'D'(eus) of the Resurrection of Christ, depicting Christ with stigmata holding a cross and an angel in colours and gold, from ‘The Hungerford Hours’, E. England (?Lincoln or Ely), c. 1330, Add MS 62106, f. 1r

The Hungerford Hours is one of a handful of surviving English Books of Hours produced between the 13th and mid-14th centuries. Other English examples from this period are the De Brailes Hours, the Neville of Hornby Hours, the Harley Hours, the Egerton Hours, and the Taymouth Hours. These books of private devotion are principally formed of a series of eight short services to be read at different times of the day and night, modelled on the Divine Office. The first item is usually a calendar, detailing the religious feasts and saints’ days of each month. Other content includes extracts from the Gospels, Hours in honour of the Cross and the Holy Spirit, the Seven Penitential Psalms, the Office of the Dead, and prayers to the Virgin, the Holy Trinity and different saints. 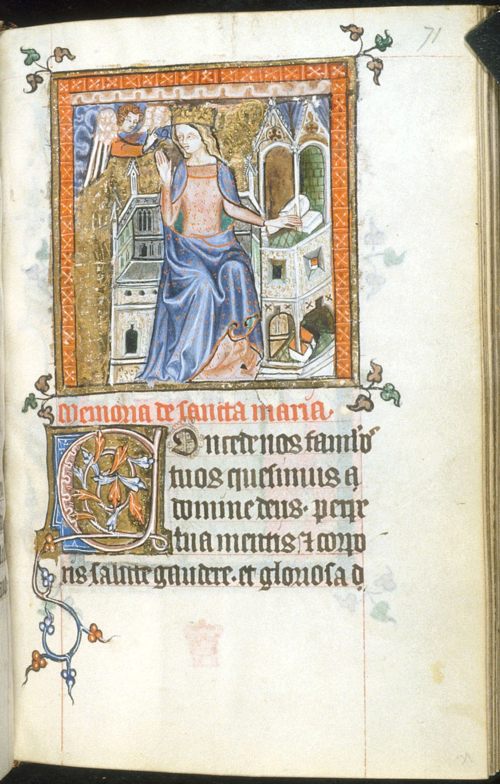 Miniature of the Annunciation, with the Virgin reading, from the 'Neville of Hornby Hours', England, S. E. (?London), 2nd quarter of the 14th century, Egerton MS 2781, f. 71r

The British Library holds eight leaves from the now dismembered Hungerford Hours: six from the Calendar (Add MS 61887), a leaf from the hour of None in the Hours of the Virgin (Add MS 62106), and a leaf from the Litany (Add MS 72707). These leaves are now available to consult in full on our Digitised Manuscripts website. 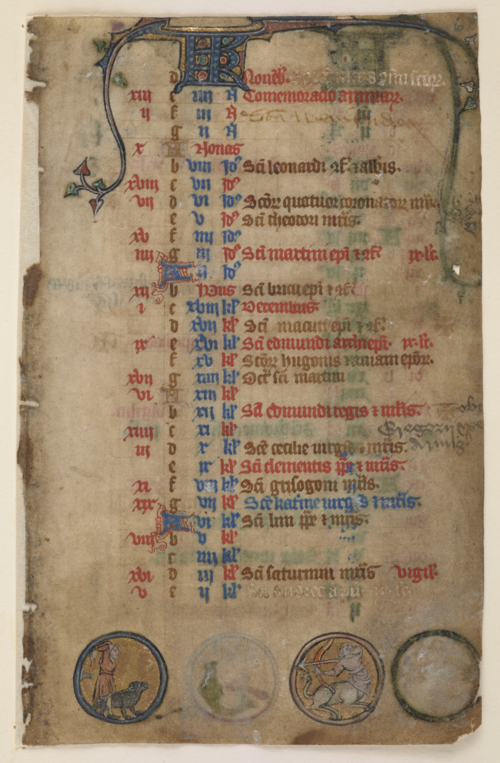 Calendar page for November, with roundels depicting the slaughter of a lamb and Sagittarius, from ‘The Hungerford Hours’, E. England (?Lincoln or Ely), c. 1330, Add MS 61887, f. 6r

The Calendar provides many clues to the history of the book. Its origin has been located to the dioceses of Lincoln or Ely because of the inclusion of the feast days of St Guthlac of Croyland (f. 2v), and Hugh, Bishop of Lincoln (b. 1135, d. 1200) (f. 6r) (who features in this blog post). 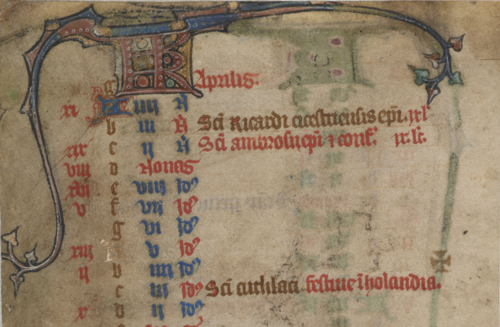 Part of our research into the Hungerford Hours has involved revising the list of identified leaves compiled by M. A. Michaels (‘Destruction, Reconstruction and Invention’ (1990)). Since the publication of his article, a number of leaves have been sold at auction. The British Library acquired Add MS 72707 and two further leaves entered university libraries in the USA: Stanford University Library and the Lilly Library, Indiana University. The leaf held by the Lilly Library bears the probable arms of the Pattishall family, who held land in the East Midlands. Robert Hungerford's sister was married to a descendant of John Pattishall, the possible 14th-century owner of the book, which offers a potential explanation for how it entered the hands of the Hungerford family in the 15th century. 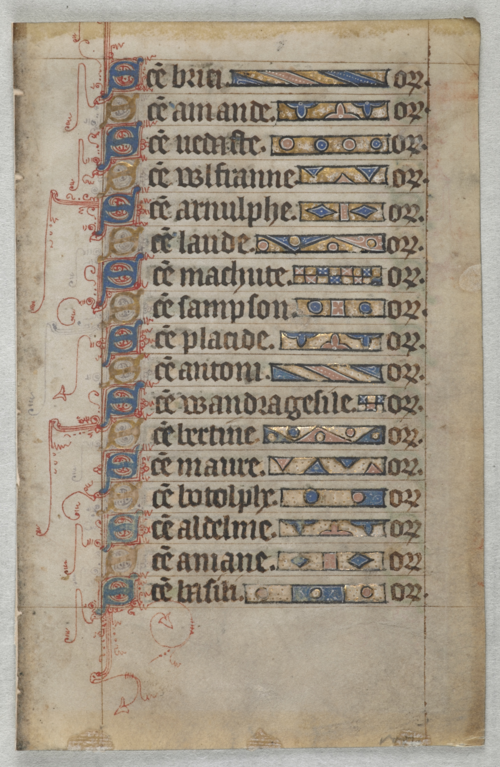 There still remains much work to do on the post-medieval provenance of this manuscript and deciphering when it was dismembered. We will keep you updated as we continue to work on the puzzle of the Hungerford Hours and do let us know if you have any insights to share on its intriguing history!

I have 3 leaves from this dismembered manuscript and have been researching its history since it was broken up in the late 1960s , a number of leaves were originally offered by dealers such as Folio Fine Arts [ Charles Ede ] and Alan Thomas . The FFA catalogues of that earlier period will be a very good source of info but they are very hard to come by . Other leaves have been sold at Sothebys Auction , Bernard Quaritch also had leaves for sale , I will be interested to see what you more you find out about this fascinating manuscript .

The revised provenance for this manuscript having descended to the Hungerfords via the Courtenay family of Powderham in Devon , was provided to the BL by me , I am currently working on this further .

My revised and updated early provenance for this manuscript is now being presented in ' The Hungerford Hours ' by Christopher de Hamel and Stephen Cooper , in ' Tributes to Adelaide Bennett Hagens . Manuscripts , Iconography , and the Late Medieval Viewer ' P.A.Patton , J.K.Golden (eds), forthcoming from Brepols .

This revises the dating of the manuscript..

The article mentioned in my previous post of the 11th of July is now published . I conclude that the manuscript was made in circa 1348 , for the marriage of Alice Pateshull to Thomas Wake .

Figure 3 caption , this should read " sancti cuthlaci " and " holandia ".