Tales of Half-Friends, Bedcovers and Sheep crossing streams: A parental lecture of the 13th century

Harley MS 527, a collection of romantic and didactic texts, mostly in Anglo-Norman French has recently been fully digitised. Of particular interest is a version of Petrus Alfonsi’s Disciplina Clericalis in Anglo-Norman French verse. This popular text is of Eastern origin and consists of a series of moral tales or exempla used by a father to instruct his son; Ward includes it in his Catalogue of Romances in the Department of Manuscripts in the British Museum vol 2, (1893) under ‘Eastern Legends and Tales’. 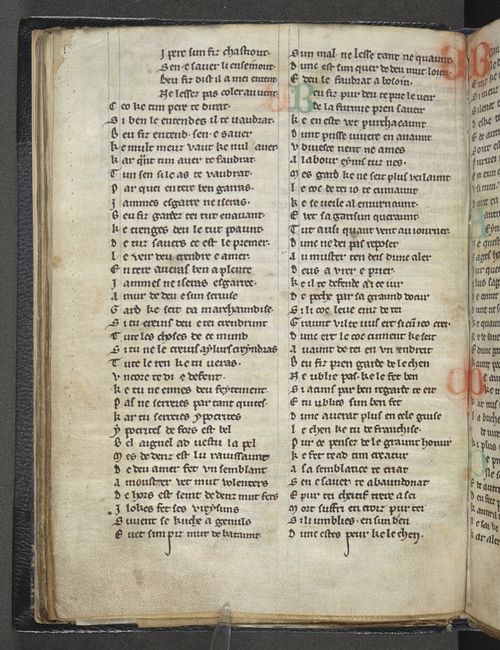 Petrus Alfonsi, the author of the Latin text, was formerly known as Rabbi Moses Sephardi and was physician to Alfonso I of Aragon.  When he converted to Christianity, he took the name Alfonsi in honour of his patron, and his writings often deliberately reject the teachings of Judaism to demonstrate his loyalty to his new religion 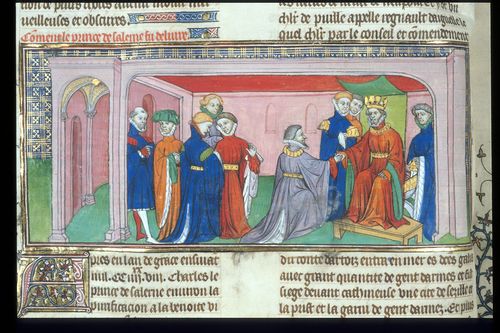 First Alfonsi and then later the unknown French translator of this work added detail and dialogue to embellish the original Eastern version and, in the latter instance to enhance its appeal to the 13th century public; for example a fox appears in some versions and ‘Paris’ is substituted for ‘Pareis’ or ‘Parais’ (Old French for ‘paradise’). However, some references to Eastern culture are retained, such as the mention of a ‘prodom’ (gentleman) who goes on a pilgrimage to Mecca.

There are 6 surviving copies in the Anglo-Norman dialect, of which the British Library has two: Harley MS 527 and Harley 4388, another collection of tales and proverbs. 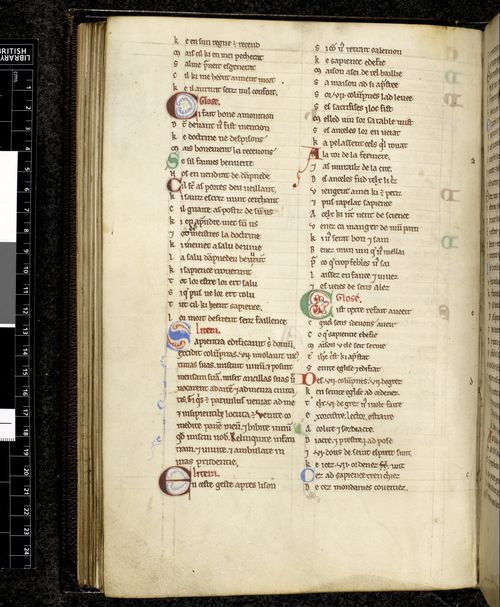 Of the 6 known versions in Old French (as written in France during this period, as compared to the Anglo-Norman dialect of England), one is currently in the British Library. Additional MS 10289 is a manuscript from Mont Saint Michel that has featured in a number of blogposts as it also contains the legend of Titus and Vespasian and the Romance of Mont Saint Michel. 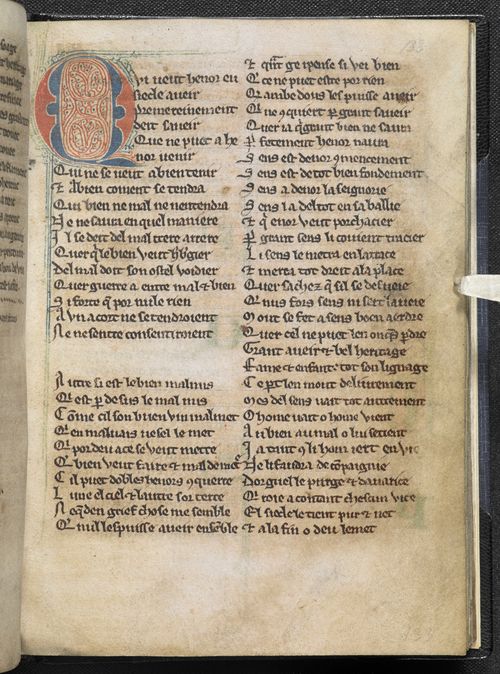 The Anglo-Norman text of Le Chastoiement in Harley MS 527 contains 26 tales by which a father instructs his son how to conduct his relationships with God and his fellow man, i.e. his friends, parents and spouse.  The father begins with an appeal for his son’s undivided attention. Does this sound familiar to fathers and sons who read our blog ?

The tales that follow are colourful, entertaining and sometimes gruesome.  Though Harley 527 is not illuminated, we have found images from other manuscripts to illustrate some of the tales. I include some of Ward’s quaint and amusing titles in English. 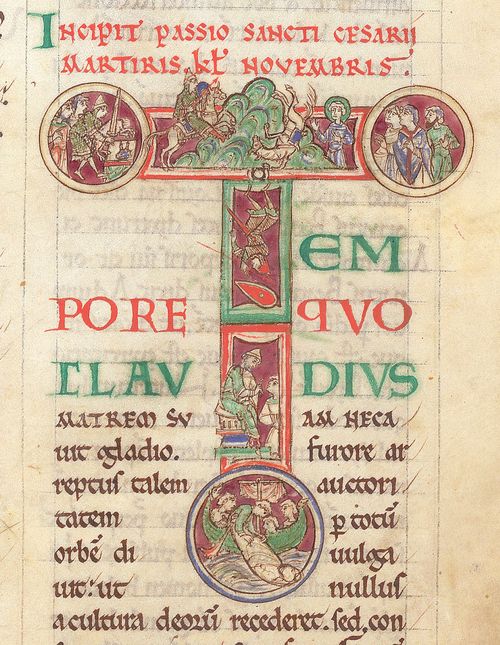 The Half-Friend or ‘Le Demi Ami’: a father asks his son how many friends he has made in his life to date, and the son answers 100.  The father on the other hand, says he has only half a friend, and is sceptical of his son’s claim.  To test the loyalty of the son’s friends, he tells him to place an animal carcass in a sack, pretend it is a human body and ask his friends to help him dispose of it.  In the end only the father’s ‘half-friend’ comes to his assistance. The father tells his son that only someone who will help when you are in need is a true friend and he follows with the second tale about ‘Two Merchants (‘Les Deux Amis’), one from Baghdad and one from Egypt, one of whom is prepared to sacrifice his true love and the other his life for his friend.

Next the father warns his son that many women are deceitful and evil and that men need God’s help to protect them from their wiles. The exempla seem rather to show the extraordinary ingenuity of the women in question! In all three tales the husband returns home unexpectedly while the wife is entertaining her lover. 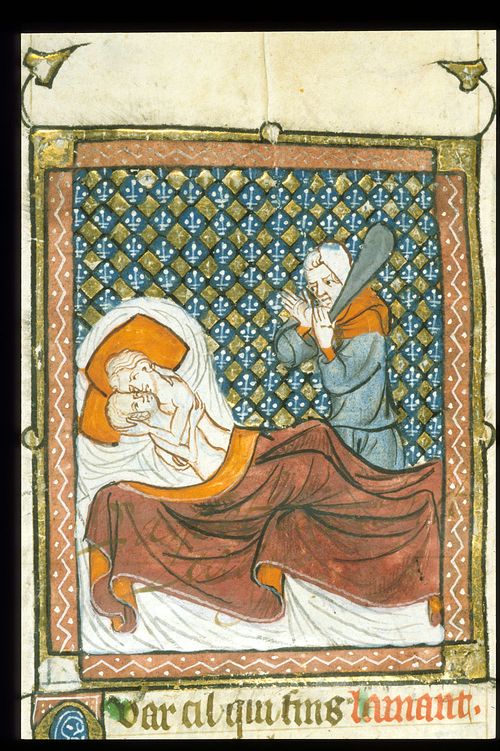 In ‘Le Borgne’ or ‘The Man with the injured eye’ a man blinds himself in his one eye while dressing his vines and returns home for some tlc from his wife.  She is otherwise occupied and hides her lover in the bed, then tells her husband she will administer a charm to help him. She places her mouth over his good eye, blocking his vision while the lover escapes, telling him that her charm that will prevent him from injuring his other eye, and with that she sends him off to bed!  In the next tale, The Husband who had a bed-coverlet held before him or ‘La Toile tendue’, the wife and her mother hold up a new quilt or bed cover they have made for the husband to admire, while the lover escapes behind it. 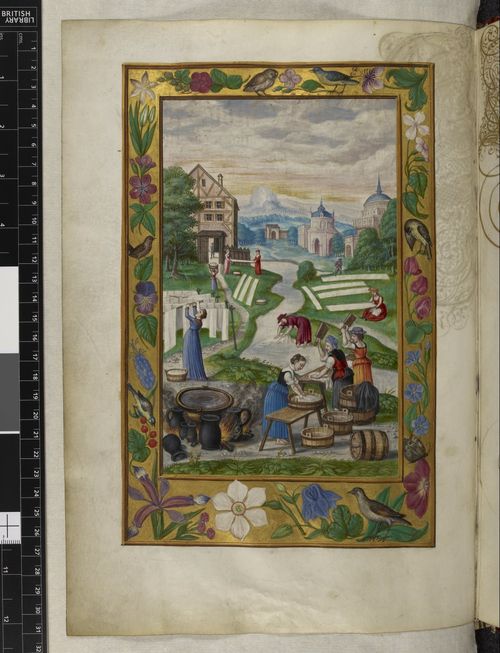 Found in a unique Anglo-Norman version in Harley MS 527, ‘The Cuvier‘ or the Gallant hidden under the washing-tub  is a further variation on the above tales, with the lover in a similarly ridiculous position, the husband fooled, and the devious wife triumphant, though shown in a thoroughly bad light. 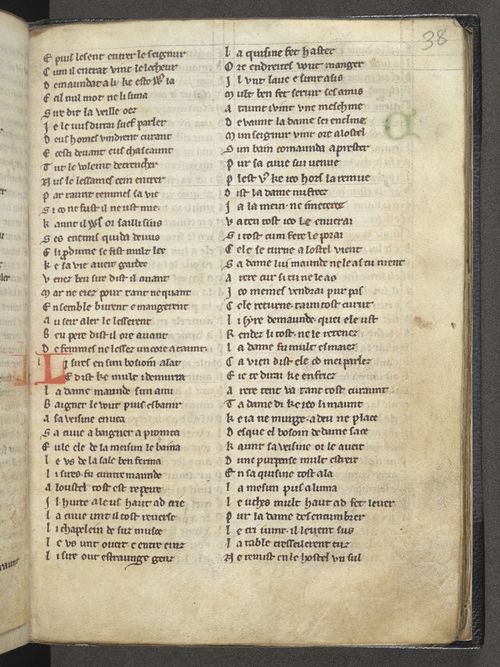 Unsurprisingly, the son seems to enjoy these tales and keeps asking for more.  After another such tale, he naturally decides he will not marry, and the father has to tell him the tale of a clever and virtuous woman. Of course the latter tale is rather boring so we will not go into details here !

In the time-honoured way of parents, the father cannot resist slipping in tales of respect for one’s elders and superiors, and then there is the story of a young clerk who is enticed into a tavern and who comes to a bad end.  One can imagine the son rolling his eyes at this obvious propaganda, nevertheless he keeps asking his father for more stories. The tenth exemplum is a very clever tale of ingenuity and a riposte by the father to the son’s insatiable demands. In ‘Le Conteur’ or ‘The Storyteller, found in Add MS 10289 but not in the Harley manuscript, a king’s storyteller tells him five stories each night until, on one occasion, the king is not sleepy and demands more.  Unlike Scheherazade, who had to tell stories for 1001 nights, the clever storyteller invents the following ruse so that he can go to sleep without losing his head.  He begins a tale about a peasant returning from a fair where he has bought many sheep, and who needs to cross a stream with them to get home.  The only way across is with an old woman in a small boat that can only take two sheep at a time. After relating how the first two sheep cross, the storyteller falls asleep. When the king wakes him to demand that he continue, he says that it is going to take hours for the sheep to cross the wide river in the slow boat, so they may as well sleep in the meantime and resume the tale in the morning.  The king is pleased with his storyteller’s cleverness and he is allowed to go back to sleep.