Today is the feast day of St Guthlac, a 7th-century saint from the Anglo-Saxon kingdom of Mercia. The British Library has digitised a number of manuscripts related to Guthlac, including the earliest fragments  of the 8th-century Life of Guthlac. Guthlac was a warrior in the Mercian border-lands who, after 9 years of fighting, had a religious conversion and became a hermit in Crowland, in Lincolnshire, where he lived in solitude on an island in the middle of a marsh. Guthlac’s cult was enormously popular, two Old English poems about him survive and he is mentioned in the Anglo-Saxon Chronicle. But aside from this, he is also of interest because the account of his life, written by a monk named Felix in around 740, is full of exciting battles with demons, vividly described. Felix's work is so vivid, in fact, that it at times it might even sound like a description of an acid trip.

Guthlac was born roughly 1 year later than Bede, around 674, and died in 715. He came from a tribe named the Guthlacingas.  Having given up his life as a soldier, he became a monk at the abbey of Repton for two years, where he was disliked by his fellow monks on account of his abstinence from alcohol. Feeling that he needed isolation in order to better contemplate God, Guthlac retreated to the Fens and took up residence in an ancient burial mound which had been partially excavated by treasure-hunters. He was visited in his cell by various people seeking his advice, including the Mercian king Æthelbald. Unfortunately for Guthlac, however, his life of quiet spiritual contemplation was often interrupted by terrible attacks from demons, which are described in some detail the earliest text about him:

In another episode, the devils visit him in the form of horrible beasts:

Suddenly he heard a noise of as of a herd of beasts rushing together and approaching his dwelling with a mighty shaking of the earth. Straightway he saw manifold shapes of various monsters bursting into his house from all sides. Thus a roaring lion fiercely threatened to tear him with its bloody teeth: then a bellowing bull dug up the earth with its hoofs and drove its gory horn into the ground; or a bear, gnashing its teeth and striking violently with either paw alternately, threatened him with blows … the hissing of the serpent, the lowing of the ox, the croaking of the raven, made harsh and horrible noises to trouble the true soldier of the true God.

The British Library holds a late 12th or early 13th-century manuscript roll which contains 15 roundels illustrating the life of Guthlac. The image below shows Guthlac being carried to the gates of hell by the devils, which is described in another episode in the Life. 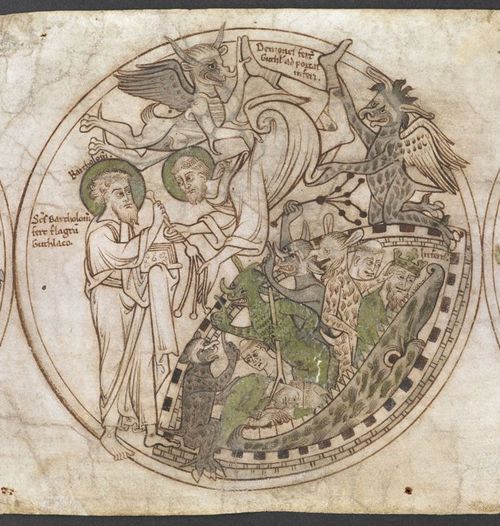 Drawing of Guthlac being carried to the gates of Hell by demons and being given a scourge by St Bartholomew with which to repel them, Harley Roll Y 6, roundel 8.  For more Hell-mouths in British Library manuscripts, see ‘Prepare to Meet Your Doom’.

The story of his life, or ‘hagiography’, describes how Guthlac lived a life of strict abstinence: ‘from the time when he began to inhabit the desert [by which Felix means the Fen-land] he ate no food of any kind except that after sunset he took a scrap of barley bread and a small cup of muddy water.’ To the modern medical mind, there is a vital clue here. Writing in Health, Disease and Healing in Medieval Culture, M. L. Cameron proposes an fascinating theory about Guthlac’s visions of devils. Barley is one of the grains susceptible to the fungus ergot. Ergot produces a number of alkaloids of the ergoline family which, when ingested, can cause hallucinations in humans -- in April 1938 the Swiss chemist Dr Albert Hofmann synthesised a novel related compound, Lysergic acid diethylamide or LSD. So, perhaps Guthlac’s extraordinary visions of devils were, in fact, caused by his diet of Barley bread. Of course, Felix might have been describing an authentic spiritual experience, but the LSD theory is an intriguing one. Like many medieval hagiographies, Felix’s Life of Saint Guthlac conforms to a particular pattern. The text is probably modelled on similar texts like the life Saint Anthony by Athanasius or Jerome’s life of Paul the Hermit. Felix succeeds in making Guthlac embody both the ideals of Christian sanctity and of Anglo-Saxon warrior society, so that Guthlac appears to be sort of a cross between St Anthony and a real-life Beowulf. It’s hard to know how much the account of his life can be trusted. But, there is a certain symmetry in the fact that Guthlac’s feast is celebrated today, which is almost exactly 78 years after Dr Hofmann discovered LSD. Hofmann’s diary entry for 19 April 1938 describes his experiences as he experimented on himself with the new compound. On arriving home that evening, a neighbour ‘Mrs R.’ brought him milk, except  ‘she was no longer Mrs. R., but rather a malevolent, insidious witch with a colored mask’. It’s a shame there isn’t a manuscript roll which illustrates the scene. 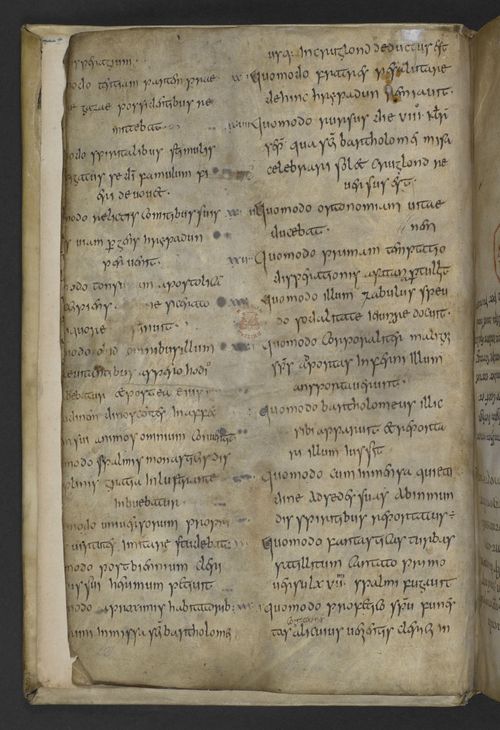 Read more about the Guthlac Roll 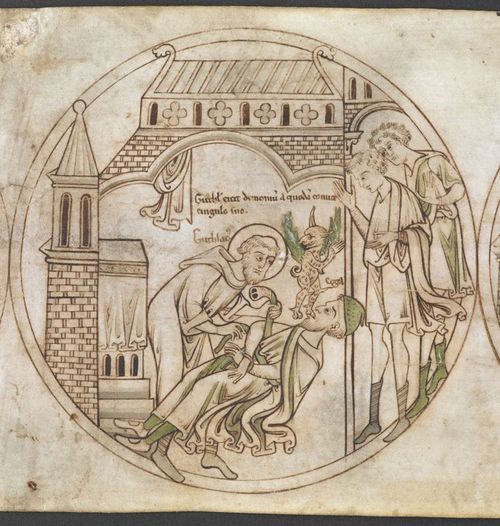 For more on the effect of ergot on hermit-saints, see M. L. Cameron, ‘The Visions of Saints Anthony and Guthlac’ in Health, Disease and Healing in Medieval Culture, ed. Sheila Campbell, Bert Hall and David Klausner (Basingstoke: Macmillan, 1992), pp. 152-58.