Florimont, Flower of the World, Grandfather of Alexander the Great

The Cycle of Alexander the Great, a group of stories surrounding the great hero of antiquity, is dealt with at length in H.L.D. Ward’s Catalogue of Romances in the British Museum, along with other legends with classical origins: Apollonius of Tyre, The Destruction of Jerusalem and The Prophecy of the Tenth Sybil. Some of our most beautifully illuminated manuscripts of the Roman d’Alexandre and the Histoire Ancienne, containing the legends of Alexander the Great, have been fully digitised, including Additional MS 15268, produced in Acre in the Kingdom of Jerusalem in the late 13th century. 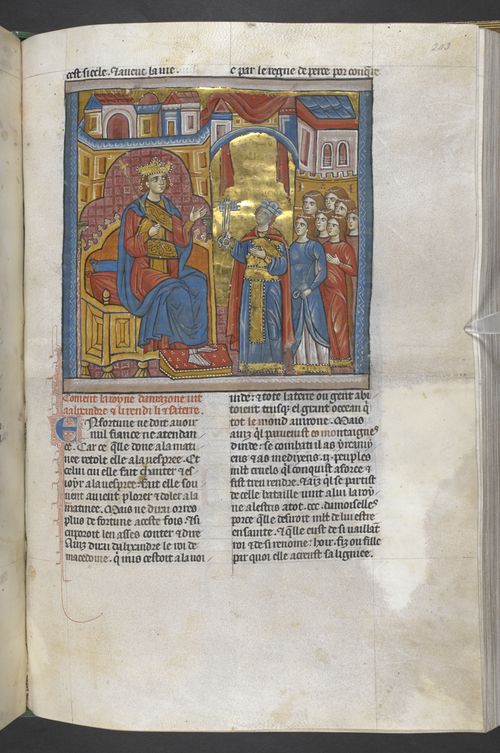 Also digitised are Add MS 19669, Royal MS 20 D I, Royal MS 19 D I and perhaps the most famous of our Alexander manuscripts, Royal MS 20 B XX, which featured in our very popular blogpost Lolcats of the Middle Ages. The young Alexander is often depicted with his father, Philip II of Macedonia, accompanying him on his campaigns. 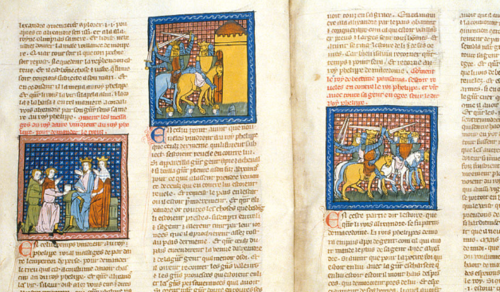 No earlier forebears are mentioned. In time, though, a popular hero like Alexander needed to have more than one illustrious ancestor, and so a prequel involving a fearless hero, Florimont, his paternal grandfather, came to light. The Village of Chatillon d’Azergues (Rhone, France), photographed by Milardello, 2009

Aimon de Varennes, a native of Chatillon d’Azergues in the Lyonnais district of France, claims to have unearthed the tale of Florimont during a trip to Philippopolis (now Plovdiv, Bulgaria) in the late 12th century. He may have in fact travelled to that part of the world, but his assertion that he translated the text from Greek to Latin and then into French appears to be fictive, though he retains certain ‘Greek’ words, which in fact demonstrate a very elementary knowledge of the language. The author’s intentions and his claims as to the origins of the tale are laid out at the beginning of the text in Harley MS 4487, one of the manuscripts of the text in the British Library: 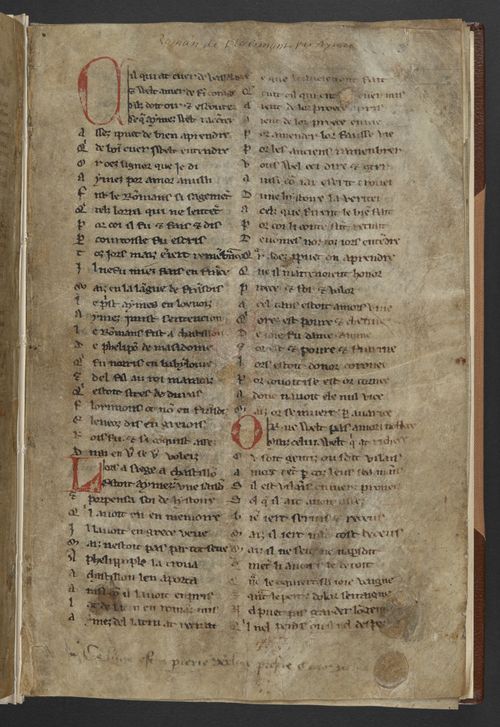 The romance of Florimont is in two parts, beginning with the story of the original King Philip I of Macedonia, whose daughter and heiress, Romadanaple married Florimont (‘flower of the world’), son of Mataquas, Duke of Albania. Their son, Philip II, married Olympias and was father to Alexander the Great. 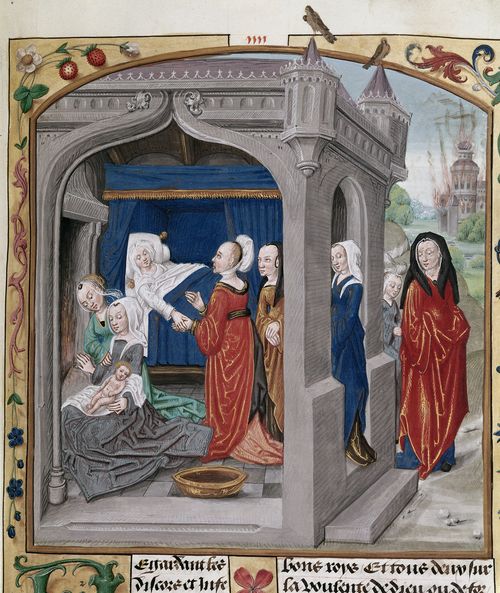 In some versions of the legend, Nectanebus, the last pharaoh, is involved in Alexander’s conception, as depicted in this miniature from a manuscript of the Roman d’Alexandre en Prose. The conception of Alexander, with Nectanebus in the form of a dragon, flying over Queen Olympias and King Philip in bed, Roman d’Alexandre en prose, France, N. or Netherlands, S., 1st quarter of the 14th century, Royal MS 20 A V, f. 6r

The second part of the story tells of Florimont’s victory over the monster terrorising his father’s kingdom and his love for the enchantress of the Isle of Celée, which causes him to reject his birth-right and travel to Albania under the name Pauvre Perdu (Poor lost boy). We do not have an image of Florimont, but here is one of his grandson, Alexander, fighting monsters: He defeats Camdiobras, king of Hungary, enemy of Mataquas of Albania, and is awarded the hand of his daughter, Romadanaple, together with his lands, which he unites with his own.

Ward’s Catalogue lists two manuscripts of the Romance of Florimont in the British Library. Both have recently been digitised, as, although they are not illustrated, they are important early copies of the text and contain examples of the south-eastern dialect of French. The earliest of the two manuscripts, Harley MS 4487, is dated to 1295 in the scribal colophon and on the previous page the author states that French is not his mother tongue: The later Harley MS 3983 is written in a neat Gothic cursive of the early 14th century with decorated initials and flourishes in the upper margin. 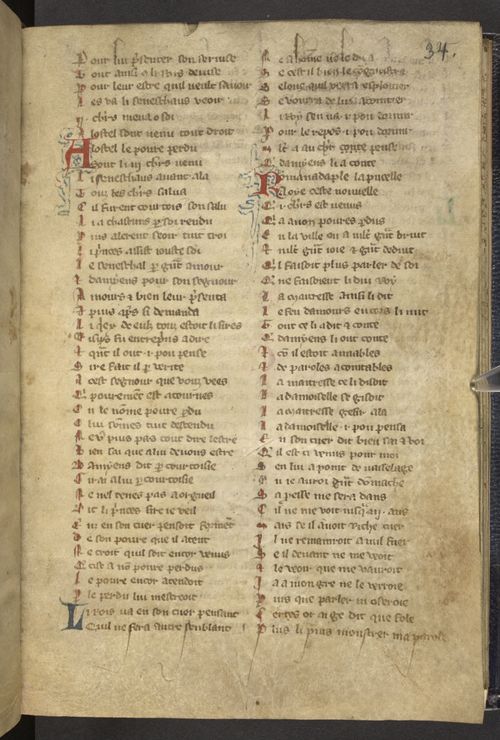 Florimont is followed by a French minstrel’s chronicle known as the Récits d’un ménestrel de Reims that begins with the conquest of Antioch by Godefroi de Bouillon and ends with the death of the eldest son of St Louis, King of France, in 1260, including a fable relating to Ysengrin the wolf and Renard the Fox. The manuscript is dated to 1323 in the scribal colophon at the end of the Florimont text. 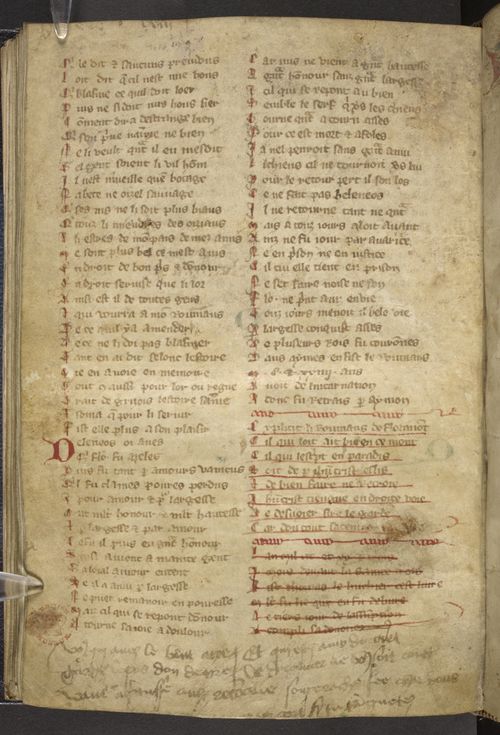 There are close to 20 surviving manuscripts of Florimont including several in the Bibliothèque Nationale de France with miniatures illustrating the text.